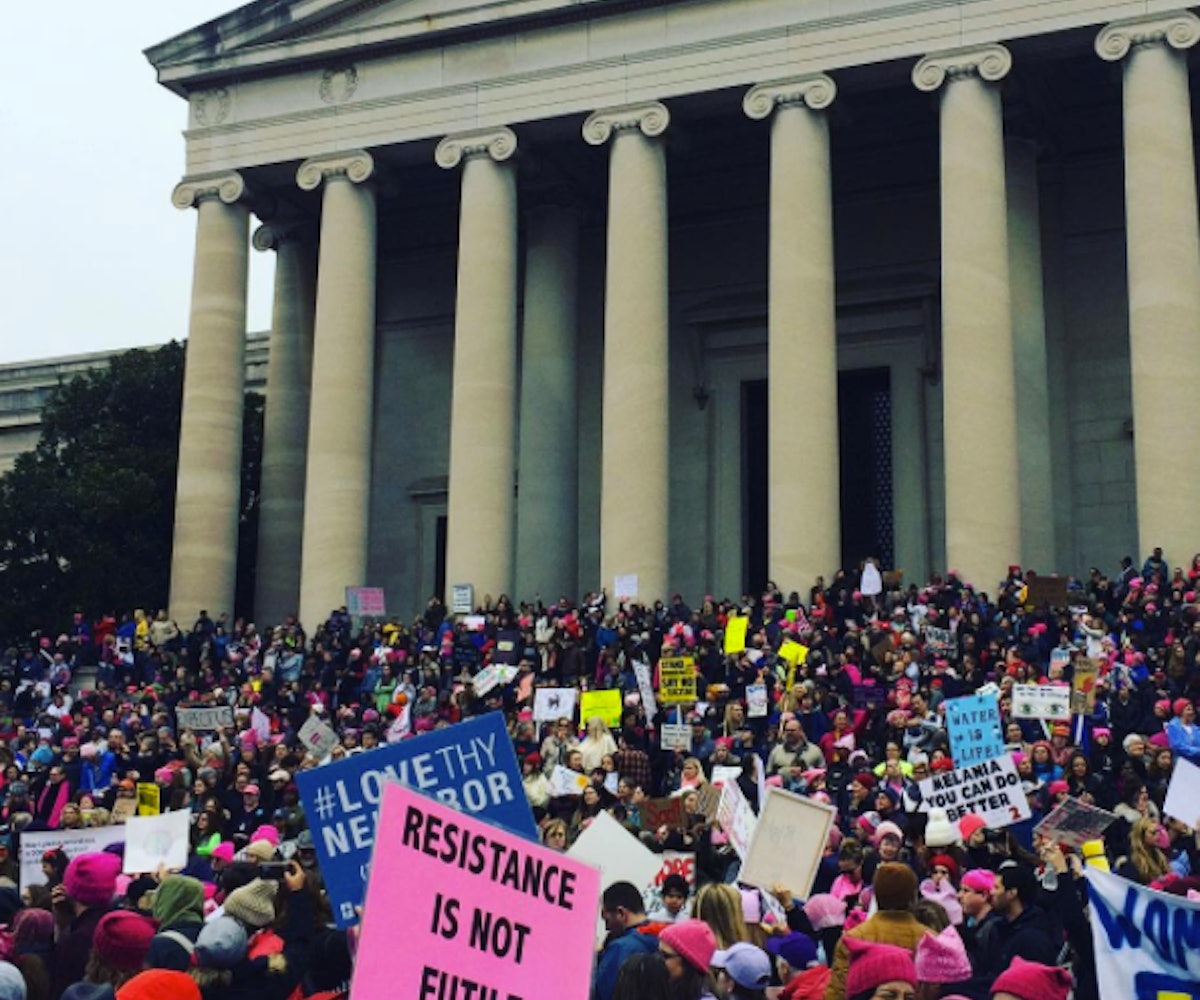 It was just after 7am on January 21, 2017, when we pulled into the service area on the side of the Maryland interstate. The parking lot was crowded with buses and cars, women and men milled about, talking and smiling, smoking and laughing; the majority of them were wearing pink hats with twin tufted ears, beacons of color on a gray, mist-swirled day.

I had to pee. Of course I did. In order to wake up at 4am and get on the road to Washington, D.C. from New York City, I'd had to guzzle tea and coffee and now, as I approached my intended destination, I really had to pee. Of course, so did every other person driving down to D.C. And so the line for the women's room was, as you can imagine, bigger and more impressive than the "crowds" of people at the previous day's presidential inauguration. Dutifully, women who entered the rest stop attempted to find the end of the line and prepared to wait for what could easily have been 20 minutes or more. Until they didn't. Until they realized that being polite and demonstrating docility was only going to lead to discomfort and stress for them, and so the line dispersed, and women walked over to the virtually lineless—though definitely in use—men's room and decided not to settle simply for what had been assigned to them, and instead took what was available. Did it make the men using the urinals uncomfortable and stressed out to see women streaming into their space? Perhaps. Did it matter? No.

All of this is to say, that hours before I stood on the Mall in Washington, there was already a feeling of inherent greatness to this day, a sentiment that long-standing boundaries would be breached, that arcane standards would be questioned, and that a powerful movement was gaining momentum; many in that movement would be wearing bright pink hats.

Which, a word about those hats. I didn't wear one. But, post-march, one of the most powerful videos I saw from the event was of the river of protestors streaming through the streets of Washington, unmistakably unified thanks to those fuschia domes. It was a visual reminder of the strength of the millions of people who came together yesterday, and it stood as a rebuke to the way many men—and women—use traditionally feminine symbols (the color pink, handmade goods, fashion items) to diminish the power of those symbols, and of the people utilizing them. It prompted me to question those people who try to disempower movements for petty reasons, and served as a reminder that this tactic has been used against women in our society as a method of disenfranchisement for ages. 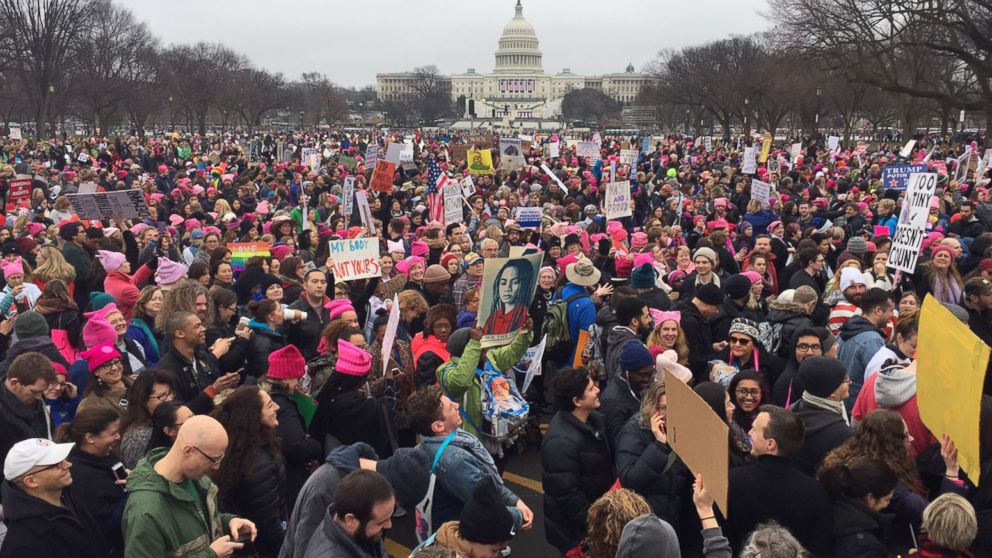 The roads down to Washington were busy that morning. Scans of Twitter and Instagram revealed that dozens of people I knew were heading down there too. It felt instantly comforting to know that, amidst the hundreds of thousands of people marching, would be many familiar faces. It didn't matter if I ran into them (actually, I ran into nobody I knew, even those I wanted to find, because cell service became a moot point very quickly), though, because it almost felt more empowering to know that direct communication wasn't necessary. We were participating in something larger than our personal bonds and friendly attachments; we were in this for a togetherness that transcended the situational and entered the realm of the eternal.

And yet, while I was easily and happily overwhelmed by the momentousness of the occasion, it was the indivual moments that buried deep into the skin. The striking silhouette of a young woman, dressed all in black, with a midnight-colored Guy Fawkes mask perched on her head, standing tall and silent above the penned in crowds in front of the National Air & Space Museum; she held burning incense in her hands, and shouted no slogans, but looked down upon the masses with strength and resilience. Taking note of each sign, serious or satirical (I particularly liked one that reminded us all that this protest is not an "overreaction, but an ovary-action"), was a reminder of the passion and creativity that abounded among the protestors. There were also signs capable of stopping me dead in my tracks, which put into context the tragedy of Trump's electoral college win amidst the historic atrocities that have been visited upon American citizens—specifically those who are not white—since this country's creation.

I wasn't in D.C. for the inauguration itself, but the images of burning limos, clouds of tear gas, and punched neo-Nazis filled my social media thread. I recognized that there was some risk of violence erupting at the Women's March and some chance of police aggression, as well. But there was nothing of the sort. Later in the day, after I'd left the march and went with my family to get something to eat, I heard two white women in pink hats comment on how peaceful the march was and congratulated themselves for how wonderful that made the day. While I certainly think that a march with few or no arrests is the ideal, and that an atmosphere of mutual respect and tolerance is a goal to strive for, not just during a march (with a clear exception being respect and/or tolerance of neo-Nazis, who should feel the full brunt of our resistance), but also in our lives in general, this conversation gave me pause.

It is vital that white women realize the privilege that their skin color affords them when it comes to political resistance. Was it a coincidence that police were laid-back and friendly during a protest with a majority of white women participants? No. While obviously white women are not afforded the same rights as white men in this society, they are still granted benefits and privileges that other women and men of color are routinely and often brutally denied. In fact, white women at a protest are probably in an even more advantageous position than white men, because white women are roundly considered to be nonthreatening to the status quo. The fact that yesterday's march didn't lead to arrests says more about the way white women are treated in our society than it does about any inherent morality of the march. And it should serve as a loud call to all the white women who participated in the march to get involved with movements like Black Lives Matter, fights for accessible and affordable healthcare, and immigration reform. The Women's March was an important beginning, but it can not be the end and it must not be the entire narrative.

About an hour after the march had officially started, when the hundreds of thousands of us who came were still standing pressed up against one another, wondering when we would be able to start walking, word started rippling down the line that the march had been "cancelled" because there were too many people to walk down its original path. But, of course, there was no canceling the march, there was only redirecting it. People slowly started trickling out from the static crowds in which they'd been standing and flooded every open area and street, all moving forward to continue on this walk toward a better future. As I walked up Pennsylvania Avenue, alongside my loved ones and thousands upon thousands more, we passed by the Newseum, an institution dedicated to the celebration of journalism, free expression, and the First Amendment. (That this is the Newseum's mission and yet they still had a sign hanging outside welcoming "45th President Donald Trump"—an irony of gargantuan proportion.) As we walked by, women wearing pink hats stood on the Newseum's balcony, cheering and chanting and waving at the crowds below. There was one man though—old, white—wearing a bright red "Make America Great Again" hat, also staring down at the crowd. He wasn't shouting, like I'd heard a woman do from her hotel balcony earlier that day: "We won, we won, we won!" Rather, he was silent and hunched over the rail, taking in the hordes of people and shaking his head.

I don't and can't know what he was thinking. I'm sure he wasn't inspired by our message (the crowd's chant at that point in the march was: "hands too small to build a wall"), but what stuck with me was that it didn't matter if he would never agree with us; he still couldn't ignore it. No matter what false numbers or "alternative facts" would be presented to this man and to all of Trump's followers about the Women's March, at least this one Trump supporter would know the truth: On January 21, 2017, women and men came out in droves, raised their voices, and demanded to be seen and heard. We proved that we will not be ignored and we will not be silenced. We demonstrated that we are in this together and that we are in it for the long haul. Our goal is a brighter and better future for everyone, and we have the power and the numbers to fight for this to happen.