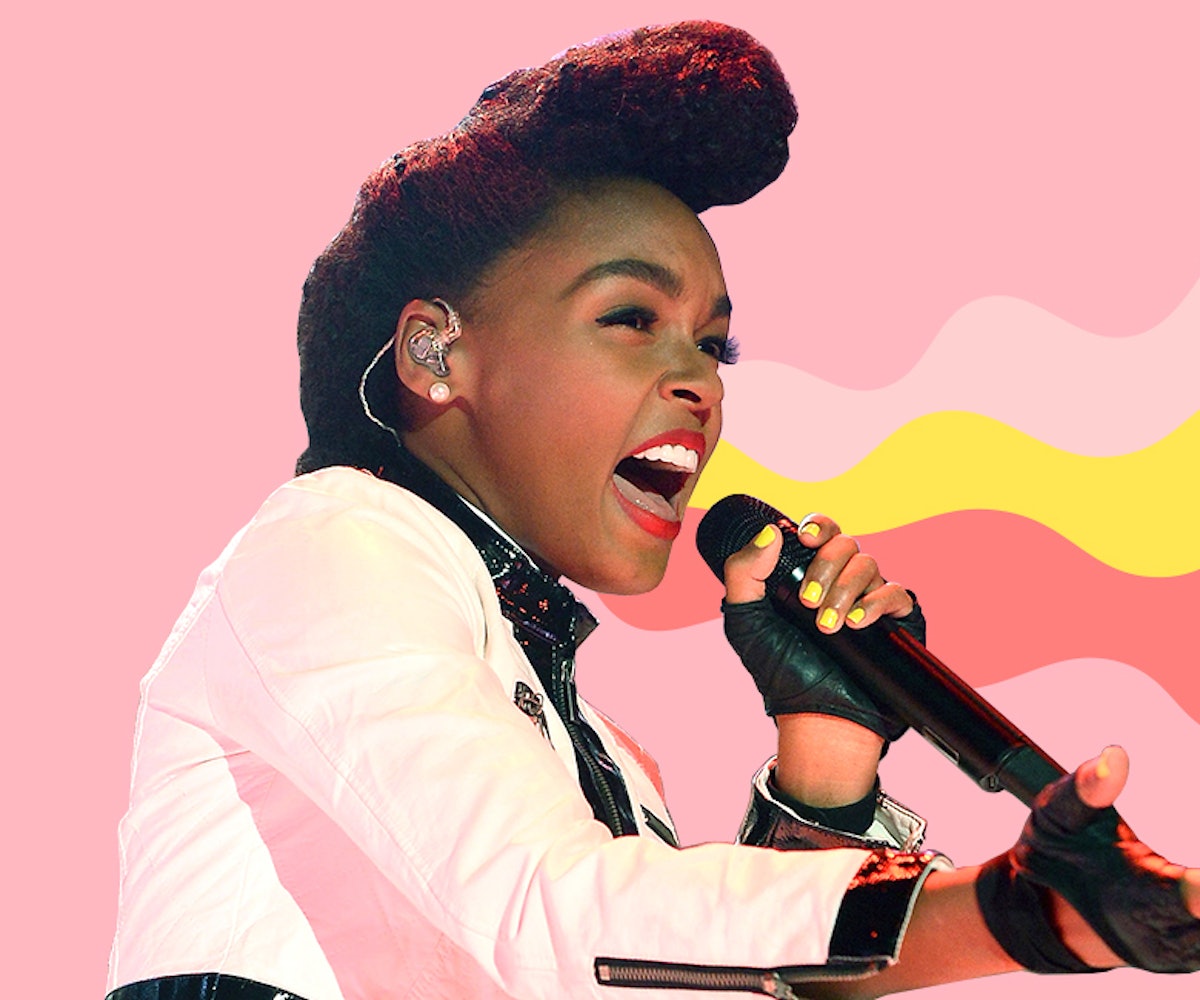 If at the end of 2017 someone were to have been asked to predict the one artist responsible for the best singles of early 2018, Janelle Monáe would have been a pretty good guess. And with "Make Me Feel" and "Django Jane" (and now "PYNK") dropping within the last few weeks, so it has transpired. The songs' sounds are disparate: "Make Me Feel" is the more immediate, funk-inflected bop bearing the hallmarks of Monáe's mentor, Prince, whilst being a precious metal all of its own; "Django Jane" feels most significant though—politically incisive, lyrically adventurous, and a clear signal of intent.

It should come as a source of huge embarrassment to all of us that Monáe hasn’t achieved the huge commercial success her music is due. The ArchAndroid reaching 17 and 51 (!) on the U.S. and U.K. charts, with The Electric Lady hitting 5 and 14. However, it does feel like the forthcoming Dirty Computer is being created with higher peaks in mind, evidenced by the presence of Julia Michaels and Justin Tranter ("Good for You," Selena Gomez; "Sorry," Justin Bieber) and producers Mattman & Robin (Britney Spears, Carly Rae Jepsen, Taylor Swift) all claiming credits on "Make Me Feel." The question then is, how does an artist with a very distinct authorial voice maintain that, or re-assert that, when working with others? The answer may lie in "Django Jane."

There is a moment toward the end of the song that illustrates Monáe’s intent succinctly, and follows a long-held tradition of musicians who want to tell their listeners who’s boss, to remind them who’s in control. Monáe sings: “I cut ‘em off, I cut ‘em off, I cut ‘em off like Van Gogh/ Now, pan right for the angle/ I got away with murder no scandal/ cue the violins and violas.” As well as being a neat cap-tip to Viola Davis and Shonda Rhimes, it is also a precursor to a change in instrumentation, as the next verse, which follows a slightly different vocal pattern, is backed by a subtle string section.

There aren’t many obvious sonic comparisons to be made between Monáe and Bruce Springsteen, but in this case, the line does call to mind the moment in "Thunder Road" where Bruce sings, “I got this guitar and I learned how to make it talk,” followed by a distorted guitar lick. That song is Springsteen 101—a Petri dish containing every Springsteen trope you could think of. In a way, that line feels a little out of place, a little hokey even, but it’s important because it reminds us of the link between Springsteen’s narrators, and Springsteen himself. His guitar and his music cast him as a kind of oracle. His stories, written to be universal, are disseminated through the power of his Telecaster.

Now, Monáe is not signaling that it is she who’s going to be playing the strings, but she’s clear that they are her choice, waiting for her cue, and this feels important. Pop singers have their creative control questioned more than any other genre. The people who start that tired debate over what is and isn’t “real music” are now emboldened by the litany of writers given credits on various songs, as if that were evidence that the person out front is just the final piece of the process. It’s a snobbery that is hard to chip away at, but you may as well try. Previously in the song, Monáe’s signaled her intent to EGOT, foregrounded her ArchAndroid persona, and generally just reeled off her various successes, before getting to this moment. The line is a beautiful flex, a distillation of everything that has come before, a reminder that the band plays because she tells them to play.

In essence, it’s a simple call-and-response structure seen everywhere in music, but particularly in black music—from gospel and spirituals to jazz and R&B. In the former, the response, from a congregation, for example, serves to converse with a preacher or leader, giving them some kind of control over the song’s direction. In the latter, where the call and response is purely instrumental, it is the opening up of a dialogue. In The Hero and The Blues, writer Albert Murray talks of how the instruments in Duke Ellington’s band state, assert, allege, quest, request, “or signify misgivings and even suspicions.” Monáe bridges the gap between these two genres, conducting a conversation with her instruments whilst asserting herself as the leader of her own choir.

There is also just something quietly satisfying about these moments in song. Often the question of why we love music can feel really difficult to answer, quite intangible, but these moments provide little bursts of logic that subtly break the fourth wall, and help ground the listener. There’s also something climactic about it. There’s a similar moment in Madonna’s "Like A Prayer," where she cries out, “Let the choir sing!” followed by the full church choir coming in on the chorus. Up until that point, the song keeps dropping you back down in the verses. After she introduces the choir, things pick up and stay up. Another slightly different example, albeit one that feels just as defiant as Monáe, came from Bob Dylan, when he told his band to “turn it up louder!” in response to being vociferously heckled at a show in the U.K.

In recent interviews, Monáe has spoken a lot about timing, how 2018 is the year for freedom and being fearless. It also feels like it’s the year for Janelle Monáe—a true pop auteur who is, more than likely, about to have a lot more people try to clamber on her bandwagon. And hey, that’s cool, there’s still room, but she’s not letting us forget who’s driving it—the same person as always.

NEXT UP
Culture
The Madonna Biopic Is Being Scrapped
Entertainment
Gracie Abrams & Gia Coppola On The Joy Of Free-Flowing Collaboration
Entertainment
Bad Bunny, Lizzo, Kim Petras Will Perform At The 2023 Grammys
Entertainment
Brendon Urie Officially Disbands Panic! At The Disco
Style + Culture, delivered straight to your inbox.