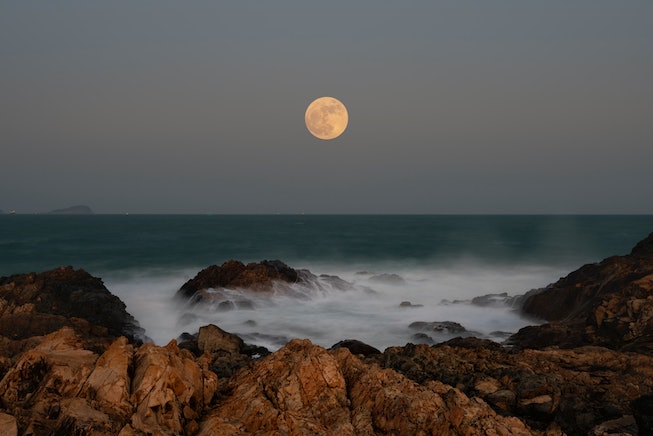 It seems like everyday there’s a new calamity careening us toward the end of the world, and the latest involves the moon. According to a new study by NASA and the University of Hawaii, there’s a “wobble” in the moon’s orbit, which, unfortunately, is not at all as cute as it sounds. In fact, the “wobble” could lead to record flooding on Earth, and feels like the premise of an apocalypse film. Below, you’ll find everything you need to know about the moon’s “wobble,” and what it could bring.

Where did the “wobble” come from?

First things first, the wobble itself is completely natural and part of the moon’s regular orbit. Wobbles have been recorded as far back as 1728. The moon has approximately 18.6-year cycles of higher high-tides and lower low-tides, and vice-versa. It’s kind of a relief to know the “wobble” isn’t a repercussion of man’s greed...right?

What makes this “wobble” different from others?

Other “wobbles” have come and gone, so you might be wondering why this one is a bigger deal. In short, it’s because of the big bad specter of our generation: climate change. The sea levels are already higher due to it, which means that coastal cities could be due for record flooding, according to the NASA Sea Level Change Team behind the study.

"We're getting closer and closer to the flooding thresholds or tipping point in these coastal locations," says team leader Ben Hamlington. "The same variability in the past that didn't cause flooding is now going to cause flooding."

What does NASA mean by “record flooding?”

The predictions seem, in a word, dire. According to the study, these floods will not only exceed flooding thresholds around the coastal cities more often, they can also occur in clusters that last more than a month. The rising sea levels and allegedly forthcoming flooding would also make coastlines uninhabitable, and potentially displace over 100 million people worldwide by the end of the century.

"Low-lying areas near sea level are increasingly at risk and suffering due to the increased flooding, and it will only get worse," said NASA Administrator Bill Nelson. "The combination of the Moon's gravitational pull, rising sea levels, and climate change will continue to exacerbate coastal flooding on our coastlines and across the world."

When is the “wobble” happening?

Technically, we have some time to prepare. The next “wobble” cycle is due for the 2030s, so in a perfect world, government bodies would utilize these grim predictions to rethink infrastructure and save people’s livelihoods. Only time will tell.

NEXT UP
The Art Issue 2022
True Life: My Partner Is Obsessed With NFTs
Astrology
Your Natal Saturn Placement In Astrology, Explained
Astrology
Your December 2022 Horoscope Fuels The Reboot
Ask A Witch
Ask A Witch: How To Survive The Holidays With Hoodoo Magic