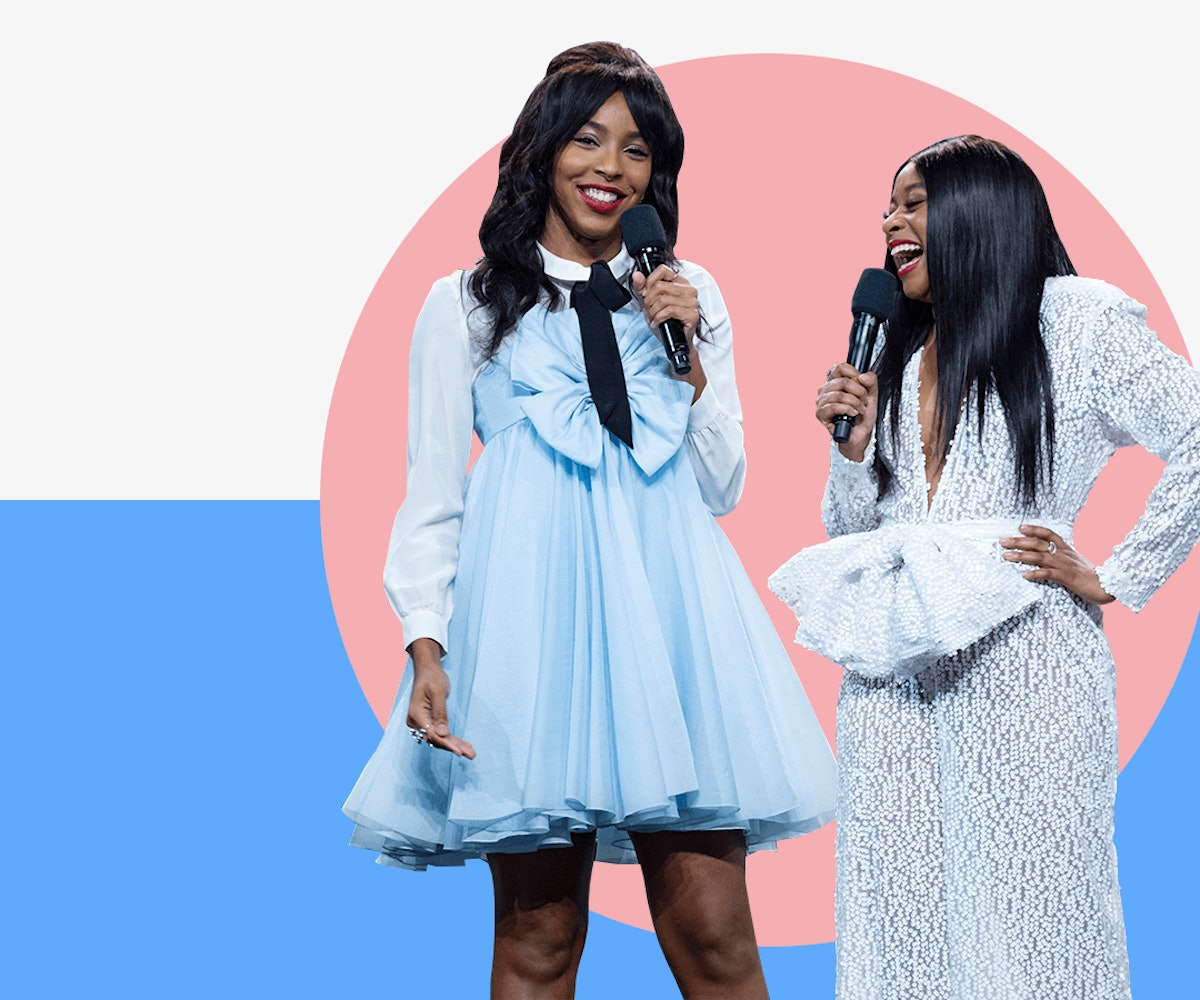 Phoebe Robinson and Jessica Williams launched their podcast 2 Dope Queens four years ago, beginning a creative partnership that would lead the duo to HBO, where the second—and final—season of the 2 Dope Queens series launches tomorrow, February 8. Fans fell in love with the pair's frank humor and singular voices; although both Robinson and Williams are stars in their own right, it was a treat to be privy to their collaboration, in which they each showed off new facets of the other, allowing them both to shine even more brightly.

For everyone missing the 2 Dope Queens podcast (it went out with a bang; their final guest was none other than Michelle Obama), make sure to check out the HBO series, where guests like Lupita Nyong'o and Daniel Radcliffe hang out with Robinson and Williams. But for now, check out my interview with them below, in which they talk about what made their partnership so special, what they have coming up next, and why they're glad they didn't share their ex-boyfriends' social security numbers with the public—tempting as that was.

You've worked together for four years now; first on just the podcast, and now the show. That's a really long time to sustain a creative partnership. What have you learned from the experience?

Phoebe Robinson: I think I really learned how to be a producer. A lot of the times, especially for women in this industry, it's just, you know, "You're in front of the camera, you're just the personality." So it's good to learn how to work behind the scenes and listen to edits and give notes back, and, you know, go through bookings and all of this sort of not necessarily fun stuff, but the work that makes the stuff onstage shine. So I look at it as a really cool opportunity to see how it works from the inside out.

Jessica Williams: I think I learned how to do things even when you're tired. We would do shows every other week, and someone would always be like, "Ah, I'm pretty tired," but getting up on stage and having the energy hit you and just being like, "Oh yeah, I do it because I love it and it makes me feel good to do it." [It also taught me the importance of] keeping a consistent schedule. Especially with acting, I feel like you're kinda freelancing and working really hard for, like, a month, and then not really working for a little bit. But this was very consistent work over time.

It seems like such an interesting balance to have this one project steadily, and then so many other ancillary things. Do you think knowing 2 Dope Queens was always there allowed you to have different creative freedom when choosing your own separate projects?

JW: Yeah, definitely. I think it really allowed us to have this, like, consistent thing that we could touch base on while having the freedom to explore other things. We both want to be working, and I think, just respecting the other person working and what they've got going on but still having this project that we have fun doing onstage. It was really fun and like a balancing act.

PR: Yeah, I was doing stand-up and writing for about six years before we met and started doing 2 Dope Queens. So I feel like I've always sort of been juggling a bunch of things at once, 'cause, especially at the beginning, I wasn't making any money, so I had to have, like, 20 jobs. So it sort of made that a little bit tricky. But then we have something like 2 Dope Queens which is so fun, and it's really rooted in just celebrating comedy and people from different backgrounds. You're sort of like, "Yeah, I have to juggle a lot, and that's hard, and Jess has to juggle a lot, and that's hard," but it's like, if your toughest problem is trying to figure out how to do all your jobs, that's a champagne problem, so I'm just kind of like, "Yes, thank you for the blessings, [I] appreciate it."

What is it about your dynamic together that you think made 2 Dope Queens so special and resonant?

JW: She really makes me laugh, and tickles me in a very deep way that is really rare. I just enjoy exploring that onstage, I really do. Surprising each other and trying to make each other laugh is something that makes 2 Dope Queens, 2 Dope Queens. And I think it really is just the spontaneity and finding the joy in her quirks, and what she enjoys, and what stupid shit she did that day, or whatever, I think it's really fun.

PR: So much of life is about relationships, right? If you look at Abbi and Ilana from Broad City or Keegan and Jordan from Key & Peele, people really respond to seeing a relationship play out on stage and seeing that human interaction. People go, "Oh, I'm like that with my friends," or "I'm like that with my cousin," or whatever. I think people can see themselves in us whether we're talking about something they can relate to, like black hair, or something that's a little less relatable for them, they're still getting that universal feeling of like, Oh, I'm surprising my friend, or, I'm making them laugh, or whatever. So I think people really enjoy those authentic moments. In something like comedy, so much of it is rooted in truth. So it's like, if you can sense that truth with us, I think that really helps with the podcast, and the HBO specials as well.

What are both of you most looking forward to in the immediate future, now that you have a break from this routine?

PR: Regular life-wise, I'm going on a three-week vacation with my boyfriend, #BritishBaekoff. And I'm going to meet his family over in the U.K. And just relaxing and writing. Career-wise, I'm really excited about What Men Want, it's coming out in February with Taraji B. Henson; 2 Dope Queens [out February 8]; and I'm working on developing a new show for myself to star in for Amazon. I'm really just trying to do a lot of stuff that excites me and get to work with a lot of people. I love collaborating. I'm just always trying to find a way to work with amazing, strong women and celebrate each other and push each other forward. I think it's great to be surrounded by so many women—everyone's killing it! It's great to not be by yourself.

Are there any things, over the years, that you realize now you didn't get the chance to talk about? Maybe because it felt off-limits? Do you... want to talk about them to me now?

PR: I think we ran the gamut of what we wanna talk about. We're definitely not gonna be like, "So this is my ex-boyfriend's name and social security number, he was a piece of shit," like we're not gonna do that. I should have [laughs], but I didn't. I think we always make sure that with whatever we talk about, we wanna respect other people who may be involved in the stories we talk about. But for me, I feel like I've gotten to say what I've wanted to say, which is really rare in a business like this, so it's been really great.

JW: Pretty much, I like to talk about things on 2 Dope Queens, and then I like to not talk about things on 2 Dope Queens. I think I've done that really well, I don't have any regrets. The fun of it is the danger of opening up and being vulnerable, but I do think a big part is also having some boundaries. Being respectful, in general, [laughs]—what she said.

2 Dope Queens is back on HBO on February 8.