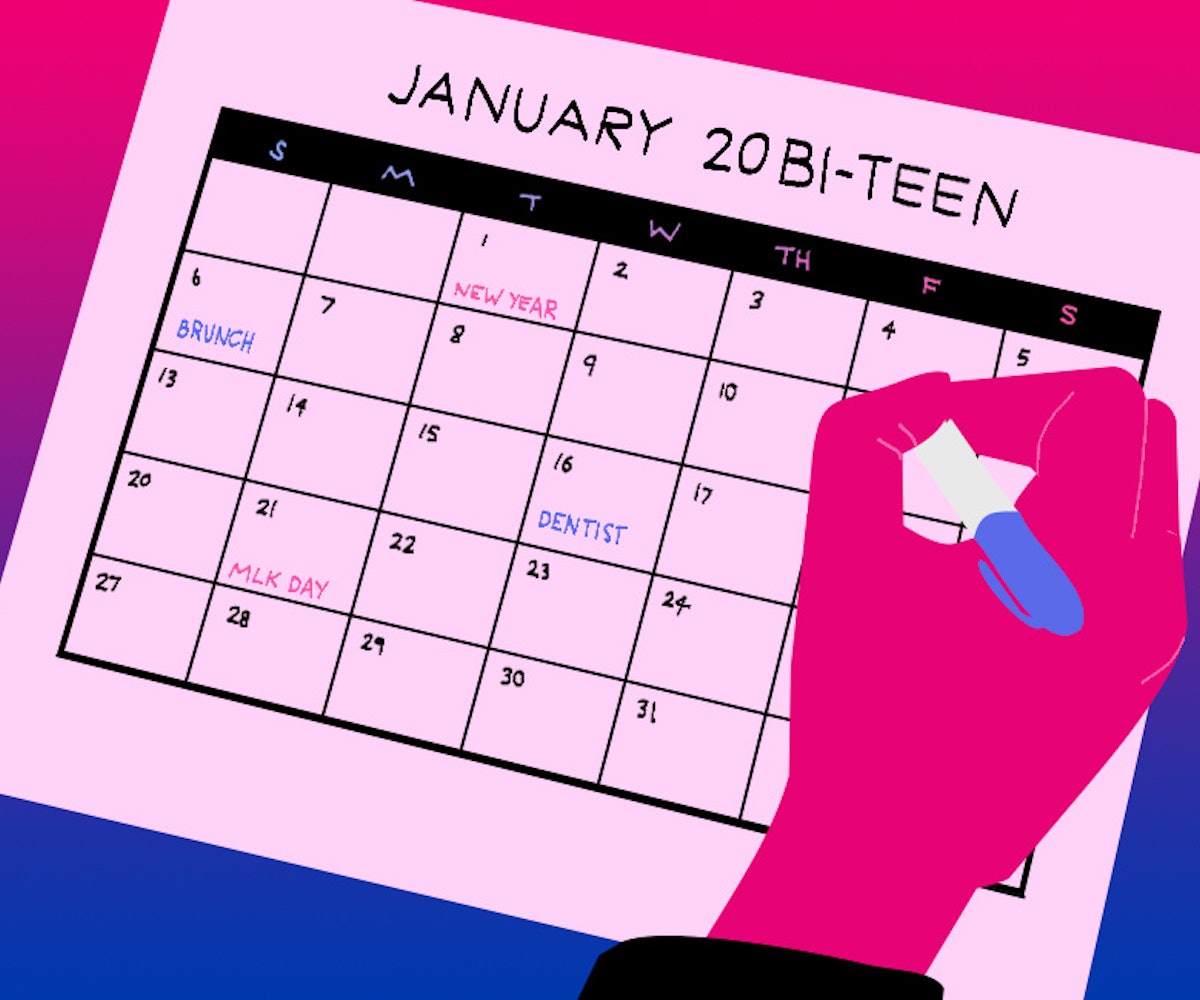 The last few years have been a great time to be bisexual. We have had bi characters on TV—not speculatively bi, but their sexuality was actually stated. Out loud! Some even sung it: Crazy Ex-Girlfriend's Darryl educated viewers about what it really means to be bi through song: "Now some may say/ Oh, you're just gay!/ Why don't you just go gay all the way?/ But that's not it/ 'Cause bi's legit!" Another character, Valencia, then joined Darryl, surprising viewers with her own bi storyline. We've also had Killing Eve, the dating show The Bi Life, and bisexual characters on Brooklyn Nine-Nineand Grown-ish, among other shout-outs here and there. Abbi Jacobson of Broad Cityeven quietly revealed through her book, I Might Regret This, that she recently dated (and broke up with) a woman, saying to Vanity Fair that she "kind of goes both ways." More and more celebrities are, if not using the B-word, saying that they "don't choose based on gender." Fluidity is becoming more accepted, and with that, more of us are feeling comfortable to come out.

And that's why it's so apt that 2019 has been decreed as 20BiTeen: it belongs to us. It also feels appropriate, since 2018 was, very fairly, crowned 20GayTeen by both Hayley Kiyoko, and Twitter at large. 20GayTeen was huge and saw a number of developments for the LGBTQ+ community, and, hopefully, 20BiTeen will see a focus on issues like bi erasure and many others. It's off to a great start, thanks to beginning with the swearing in of the first out bisexual senator, Kyrsten Sinema, by noted homophobe Mike Pence on January 4th. Sinema is already a bi legend: 14 years ago, in response to a homophobic Republican speech, she declared, "Duh, I'm bisexual." A bold move at all in her position, but in 2005, even more so.

With Sinema to march us boldly into 20BiTeen, it's bound to be a great year. But it's not just Sinema's presence which makes that clear, nor is it the return of bi-filled pop culture like the fifth and final season of Broad City, or the second season of Killing Eve. Instead, it's what Sinema and these pop culture moments represent: The fact that the more we claim our bisexuality, the more we educate others and support them in coming out, the stronger we will be. These things are never easy, and acceptance is often hard-won, but the more we realize that we are all in it together, the easier it will get.

Growing up bisexual, I didn't actually have that word for it. I never called myself straight, per se, I just lived my life, lusting over Xena and skateboarding, until I turned 13 and had some way to express myself. And by express myself, I mean make out with all my friends, who were also bi and also refusing to name it. When I was 17 and came out, there was no media out there for me. Sure, the word had been thrown around when I was emo, but it was really more of an insult or a joke. I had either straight media to explore, like men's magazines, or lesbian shows like The L Word that treated bisexual women as people who were going through a passing phase—if they even existed at all. We had Marissa and Alex on The O.C. and Tara and Willow on Buffy, which I was grateful for at the time, but, in hindsight, these relationships and characters feel more like fetishistic snubs than anything real. This was part of the pattern of bisexuality, especially as it related to women: We were invisible, until we were fetishized. Still, though, I ate up every passing mention of myself on-screen, even if it ended in a punchline.

Hopefully, though, this is the year in which bi and pansexual people stop having our identity erased. Too often, we are presumed to be in a "phase," experimenting until we settle down into a "straight" relationship, or just hedging our bets before coming out as gay. The truth is that there is a beautiful, valid space in-between, where we don't have to prove ourselves to anyone: whoever we have been with, whoever we will be with, our sexuality counts just as much as anyone else's.

But humans like binaries, and when something isn't as clear-cut as our brains want it to be, we struggle to understand it. Luckily, that's changing: On-screen and off, bisexuality is becoming valid and visible. We are getting louder. At 25, I am finally comfortable enough with the validity of my sexuality to be open about it. My sister, aged 12, is proudly out both at school and online, and tells me that a lot of her friends are, too. It fills my heart to know that it isn't as hard for the next generation as it was for us.

This is important to recognize, because, as much as we might all be talking and joking about 20BiTeen, it's not all fun and memes. As the LGBTQ+ community has fought for acceptance and recognition, bisexual people have often fallen to the wayside. At times rejected by both straight and gay people, our identity is often questioned: We're accused of being confused, greedy, of not knowing who we are yet. We are misunderstood, with sexual partners fetishizing our sexuality or being jealously afraid of what it means for them.

If 20BiTeen is a true continuation of our stories being told on-screen, by celebrities and, more importantly by us, that means that even more people will feel empowered to come out. If those of us who are brave and comfortable enough feel safe enough to talk about our sexuality, we can make others feel happy to speak about their experiences, too. Hopefully, 20BiTeen is the start of a new era for bisexual people, one in which we are accepted. There is hard work to be done in educating people and in supporting organizations and in giving voice to our fellow bisexual people and other members of the community who deserve the light while still giving attention to our own struggles. There's work to be done, but fun to be had: It's 20BiTeen, baby! Let's own it.