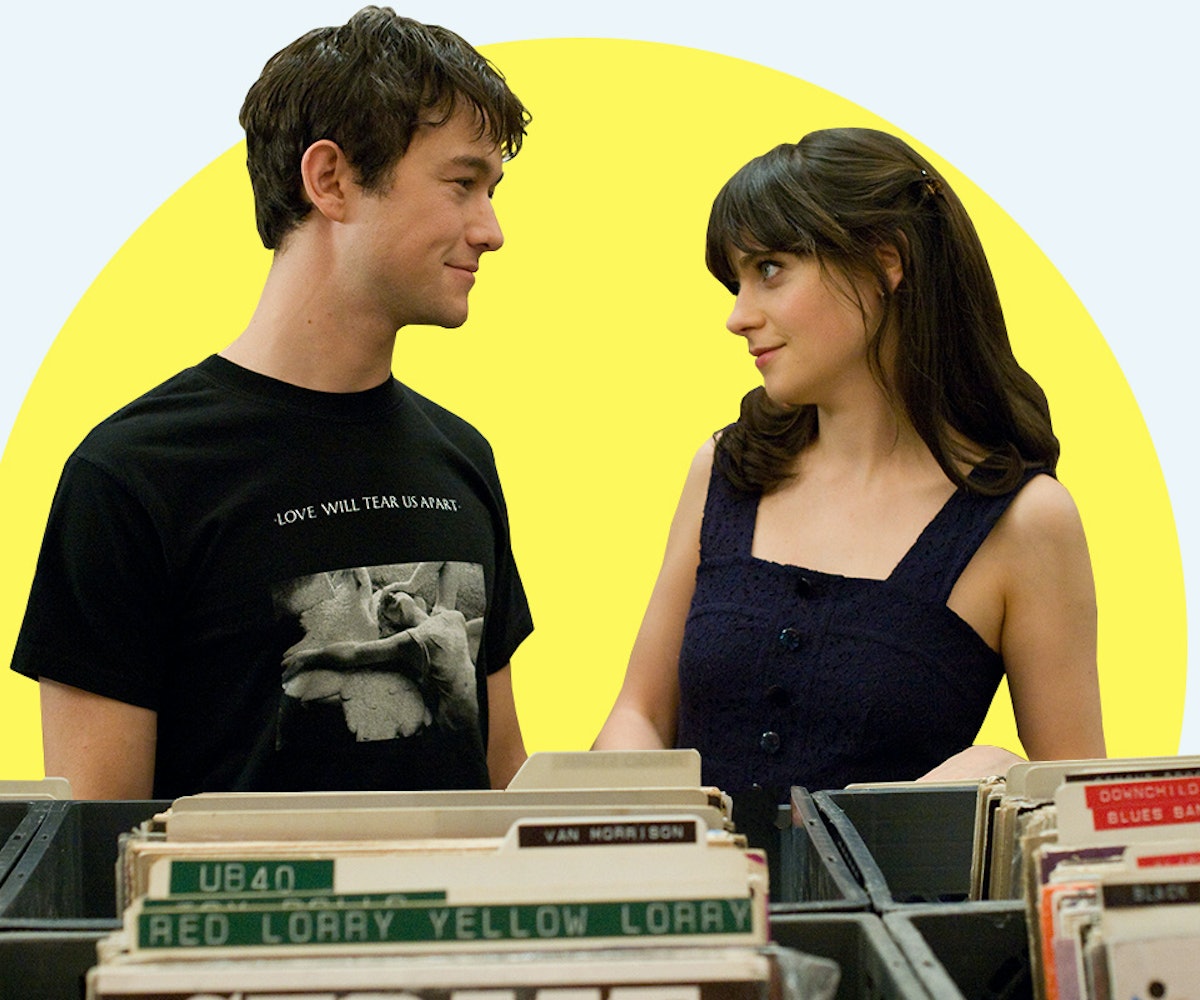 Here's a fun activity: Type "500 Days Of Summer" into Facebook, click on "posts from friends only" (this works for Twitter too) and compare the commentary on (500) Days of Summer from 2009 to now. If your feeds are anything like mine, the same people who were once moon-eyed over Tom Hansen (the film's protagonist, played by Joseph Gordon-Levitt), have since expressed their revulsion, not only for him but also for ever having liked him in the first place. Gordon-Levitt has even offered up his own admission that it was really his character who was in the wrong. "Watch it again," he tweeted last year, in response to a viewer who "still hadn't forgiven Summer," played by Zooey Deschanel. Gordon-Levitt wrote: "It's mostly Tom's fault. He's projecting. He's not listening. He's selfish. Luckily he grows by the end."

While plenty of the film's images have been burned into our collective brains—Tom and Summer in the elevator, Tom and Summer in Ikea, Tom and Summer on a fairy light-lit rooftop—since its debut, the film's most persistently lingering legacy is this question: Who was in the wrong? Tom or Summer? And whether or not you think the film is any good, it's worth recognizing that it has, at least, made us question who we see as heroes and villains, and how those views evolve over time.

Here's something basically everyone can agree on: Tom's view of Summer is two-dimensional and solipsistic. "He wasn't observing the inner life of the Summer character. He projected on her," Scott Neustadter, who wrote the film based off his own experiences, confirmed to Entertainment Weekly in February. "We think of that as romantic, but really it's just intellectual laziness." Tom sees his relationships to women as transitory states within his own heroic arc, and thus sees women as objects, even literally turning them into seasons—Summer into Autumn. Tom's perception of women isn't universalized, though; everyone else in the film, even a 12-year-old Chloë Grace Moretz, is able to pick apart the flaws in Tom's worldview: "Just because she likes the same bizarro crap you do doesn't mean she's your soulmate" remains one of the film's best lines. But it's because Tom's indie dishwater aesthetic, and immature take on love, suffuses the entire film, that deciphering whether these traits are there to be mocked or endorsed is difficult. It's easy to see the toxicity of his views in retrospect, but troubling to think about how easy it was for people to embrace them in the moment.

Perhaps, though, it's this ambiguity that signifies what a great romantic comedy should do. As a genre, rom-coms must try to contend with the changing relations between men and women. Can they be friends? Can they overcome their differences? Can they share the same vision? These are questions to which there are no easy answers, if there are even are answers at all, because neither men nor women are monolithic entities. And thus the resulting films, very much like (500) Days of Summer, are almost always ideologically confused. But it's exactly those confusions, those contradictions, that make their role in popular culture significant. The genre should thrive on ceaseless, eternally reconsolidating debate.

And (500) Days Of Summer is a particularly debate-worthy case. Released just as the internet think-piece economy really began to take off, the film is inseparable from the discourse it's inspired and the film criticism which preceded it. Whether deliberately or not, Summer crystallized the trope of the Manic Pixie Dream Girl, a term which had been coined two years prior by film critic Nathan Rabin for the AV Club. As he defined it then, the MPDG "exists solely in the fevered imaginations of sensitive writer-directors to teach broodingly soulful young men to embrace life and its infinite mysteries and adventures." While Rabin used Kirsten Dunst's role in Elizabethtown and Natalie Portman's in Garden State to support his definition, no character has been more affiliated with the trope than Summer, and no actress has born that burden more than Deschanel.

Deschanel broke into the mainstream around the same time Rabin's MPDG entered popular consciousness; when cutesiness—bangs, colorful tights, and dressing like a nursery school teacher—was the dominant aesthetic. So, whether Summer's character existed to undermine the MPDG trope, or to stylishly play into it, is yet another point of debate. One thing's for sure—Summer's not like other girls. She doesn't give into the format of a rom-com. In consonance with the film's main theme, she subverts gendered expectations. "Boy meets girl. Boy falls in love. Girl doesn't," so went the film's tagline, which should have been warning enough. But the frustration audiences felt when the boy really didn't get the girl was pinned entirely on Summer. "She's a bitch," is still one of the most popular rallying cries for those in Team Tom.

It was easy to antagonize her then because we had the language to do so. In 2009, squeezing a woman into a catchy sounding category like the Manic Pixie Dream Girl was customary, but the same couldn't be extended to men. Ten years ago, we didn't have—or at least didn't utilize—the language to essentialize men, or to make tropes out of their misgivings, as we do today. For a long time, women have been wary not to behave like, say, a homewrecker, a bunny boiler, or be high maintenance in their relationships with men. But it wasn't until recently that men's behavior and self-awareness was regularly policed by language, too.

"The Nice Guy," "The Soft Guy," "The Fuck Boy," have all been coined since the release of (500) Days Of Summer, and used to retroactively assess Tom's role in the film, as well as the men in our own romantic relationships. To take the first example (all three of the terms I mentioned have overlapping definitions, to be fair), a term like "The Nice Guy"—a man defined by his need to feel romantically and sexually compensated just for being "nice"—is a way to easily identify Tom's behavior as bad. As one Twitter user puts it: "I remember in 2008 where we all watched (500) Days of Summer and thought Summer was a bitch; Ten years later we now all collectively understand that Tom just a fetishistic Nice Guy(tm)."

That we, as a culture, have shifted our judgment on (500) Days Of Summer in the 10 years since its release means that not only has our way of watching films changed, but our way of dating has, too. At the core of it all, we watch romantic comedies because they reflect the changing politics of (heterosexual) dating and falling in love. It's why a show called Love Island is currently taking over the world. We need to see love and sex—some of the most private moments of our lives—projected onto the screen, so that we can assess ourself and our lovers against them. Try it out. Invite him to come over and watch (500) Days Of Summer. Ask him who's in the wrong—and don't be afraid to dump him if he says Summer.