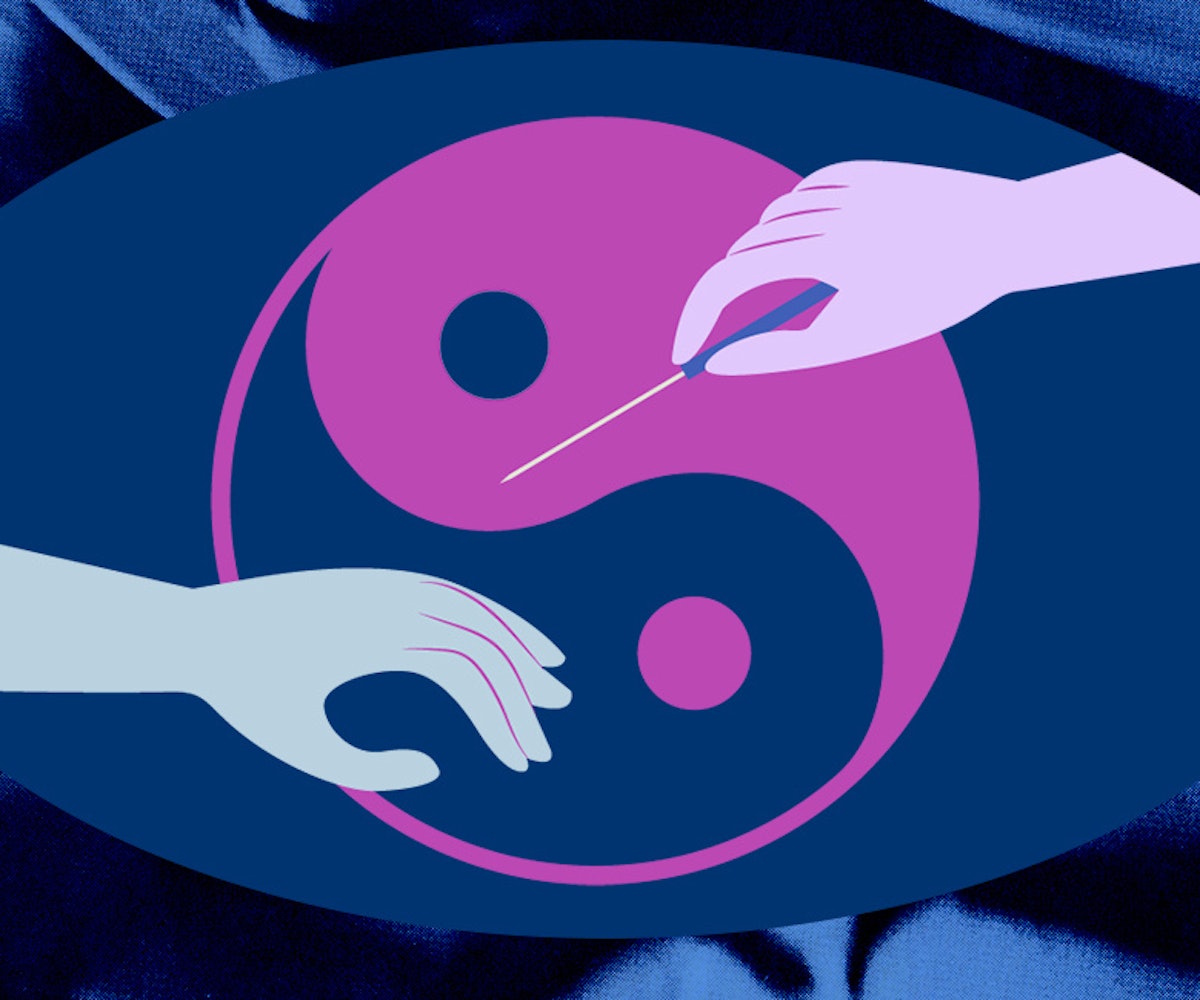 Five years ago, I waved goodbye to my formerly clockwork menstrual cycle. I hadn't meant to, but, after I'd spent some time off birth control pills, a new gynecologist prescribed me a new one, telling me to start taking it immediately and not wait until my period started naturally. I did as I was told, but everything changed.

After having spent years bleeding for five days, every 28 days, what followed that first pill was mid-month spotting (when my natural period used to take place) and irregular bleeding (when my birth control's placebo pills said my period should take place) over the course of at least 10 days. Even trying many other different birth control pills and a lot of doctor consultations didn't set things right again. Eventually, after talking to a gynecologist, I went off the pill two years later, but the irregular cycle remained, now causing even more fear as there was no apparent reason for it. More consultations, including one very invasive and expensive ultrasound, and blood and hormone tests followed. The verdict? I was perfectly healthy. It should have been reassuring, but why wasn't my period going back to normal? When I would ask what I could do to fix the cycle, I was advised... to go on the pill.

After finding that advice unhelpful given how this whole thing had started, I turned to alternative methods to regulating my cycle: Ayurvedic consultations, meditation, different diet plans, exercise, tongue scraping, herbal teas, natural supplements, Chinese herbs, aloe vera, apple cider vinegar—you name it, I probably tried it, drank it, used it. By the time I found myself, this last fall, in the Modrn Sanctuary office of Shari Auth—a certified doctor of Chinese medicine, licensed acupuncturist, herbalist, panchakarma therapist, yoga teacher, and shaman—I didn't expect anything to happen. She asked to see my tongue, listened to my pulse—all things I've done before with other practitioners—and suggested I do acupuncture. This was something I'd never done before, thanks to a moderate fear of needles (I am fine to let someone draw blood or give me a vaccination as long as I don't look while it's happening). But I was willing to try anything.

"You will not see the difference after one session," Auth warned as she inserted needles into my stomach, legs, and head. "Restoring a cycle can take months of sessions." Except here's the thing: I did see an immediate difference after just that one session. My first period following the session was six days long. For the first time in four and a half years, I felt like my body was back to how it had always been, how I felt it was supposed to be.

"Acupuncture has hundreds of use cases. It works with the fascial network of the body, which is the connective tissue, to send messages to the brain that alter brain chemistry," says Dr. Auth, now a co-founder of WTHN, a modern acupuncture center in Manhattan, when I touch base with her months after that first session. "It can alter brain chemistry in a variety of ways depending on what you want to do. It can increase your body's natural opioids like endorphins and enkephalins for pain reduction. It can also lower cortisol levels for stress and increase serotonin and dopamine levels for feelings of well-being. Acupuncture is also a natural anti-inflammatory and it increases circulation locally so it can relax tight or sore muscles."

Auth says one of the most common concerns she sees in patients have to do with women's health, whether it's polycystic ovary syndrome, PMS, or fertility issues. (The other most common concern is pain.) In fact, while WTHN co-founder Michelle Larvae first came to Auth in the summer of 2016 as a client to get relief for chronic pain following a ski accident, that dislocated vertebrae in her neck and created a fracture in her back, she credits Auth and acupuncture for helping her get pregnant with her son.

"One of the things that acupuncture does is it promotes hormonal balance, and that's why it's so good for women's health," says Dr. Auth. "Acupuncture helps you reach homeostasis, and homeostasis is balance. So it's going to adjust the hormonal level as necessary to bring you to a more optimal state."

To reach that state, I should warn you, prepare to have to answer a lot of personal questions. "When you say irregular, an acupuncturist would want to know what that means exactly. How many days long is your cycle and what does it vary between? What's the longest you've had in the last year? What's the shortest you've had in the last year?" says Auth of the questions you should expect from an acupuncturist when seeing them for the first time for period concerns; she continues, listing others off: "Have you had pain when you bleed? When you do bleed, how many days do you bleed for? How strong is the flow when you bleed?"

When I went to see her for the first time, those were the questions I could answer without glancing at a calendar, so used was I to answering them at a doctor's office. But, when she asked what color my blood is when I menstruate, I was stumped. "It's different when the color is red, pink, brown," she tells me when I ask why she wanted to know. "All these things mean something in Chinese medicine." A color could indicate to a practitioner whether there is a deficiency or stagnation in other parts of the body causing menstrual issues and alter the recommendations they would give.

Some of the other questions you can expect before the first needle goes in: "Are there any clots in your blood? And then just other things, like do you have any lightheadedness with your period? Do you have any pain with your period? What kind of emotions do you experience with your period?" According to Auth, all of these things mean something to a Chinese medicine practitioner and could change the placement of a needle for an acupuncturist working on you.

Speaking of needles again, no, they don't hurt. In fact, they're the size of a human hair or smaller. "Most people's relationship with needles starts from when they're babies being vaccinated, and that's a hypodermic needle, so it's a hollow needle that's meant to inject something like a vaccine or draw blood, so, by nature of it being hollow, it's a much thicker needle," says Auth. "You can fit 40 acupuncture needles into one hypodermic needle." For those still afraid, she assures that "there's a sensation but there isn't pain." She continues, "Most people fall asleep with the needles in them. So this hurdle over the fear of needles is over once the first needle has been inserted." I second that, experiencing essentially nothing even as the needles went into sensitive parts of my body like my feet and head.

While I experienced a change from my first session, I did take Auth's advice to heart and have been getting acupuncture monthly since WTHN's November opening. And while I've never had another session with Auth herself, I've been seeing other acupuncturists, all of whom she personally vets before hiring, to equally positive results. Larivee, too, stresses that while acupuncture can have immediate results in helping with a cold or alleviating pain, it should be looked at as a "preventative lifestyle," and not a cure, and credits that as the reason the practice created a membership that offers $75 sessions with a six-month commitment (single sessions are $85). "Acupuncture can empower you to boost your immunity, reduce stress and anxiety, while also help with other things that pop up, whether it's PMS or some kind of injury," she says. "It's a traditionally a system of preventative health care, so having that routine really ties to that."

As someone who just recently got back to having a 28-day cycle after a long time, it's a routine I look forward to having.