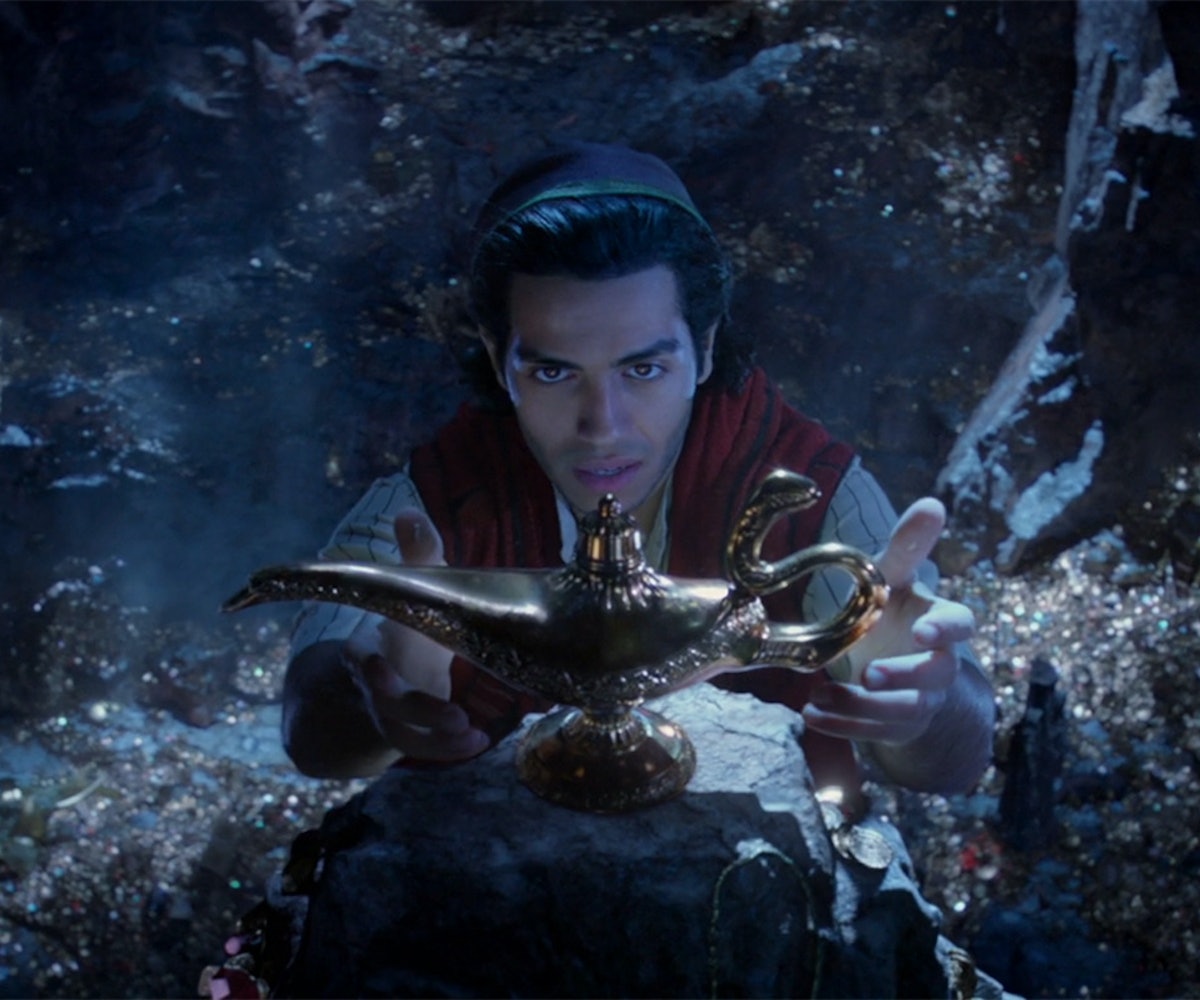 When Disney launches its own streaming service in the fall, word is that it will mark the end of the "Disney Vault"—the artificial scarcity that Disney has been imposing on its films since the early days of VHS. Supposedly, all its canon animated classics (even, perhaps, the less in-demand, not-especially-classic likes of The Black Cauldron or Home on the Range) will be available to stream at any time on Disney Plus. I leave it to consumers to decide whether this is a great deal or actually just a draconian contract to rent all Disney movies in perpetuity, but Disney has found another way to monetize its back catalog, anyway: big-budget sorta-live-action remakes.

The remakes started out as something very different: Tim Burton's Alice in Wonderland, regardless of the intense (and, frankly, irrational) anger it inspires in some corners, isn't really a remake of the 1951 Disney cartoon by the same name. It takes characters familiar from that cartoon, mixes in elements from the Lewis Carroll source material, and filters them through the sensibilities of Burton. Similarly, Maleficent (which Burton was once approached to direct) retells Sleeping Beauty through the villain's eyes. Though both of those movies were big hits, other self-remakes from Disney have been more like theme park expansion packs; the remakes Cinderella and The Jungle Book aren't as short as their predecessors and feature more characters, but they hit a lot of the same notes. The 2017 version of Beauty and the Beast is even theme-parkier and even more slavish, and this summer unveils the two remaining crown jewels from its '90s run: Guy Ritchie's Aladdin and Jon Favreau's The Lion King.

The artistic reasons, if any, for reanimating The Lion King with faux-photoreal CGI escape me. But Aladdin, well, it's somehow both an animated classic that shouldn't be touched and material that might benefit from an overhaul. First and foremost, a live-action (ish) Aladdin offers an opportunity to tell this story with a more appropriately diverse cast than the voice actors from the original, where actors literally named Scott and Linda play Aladdin and Princess Jasmine. It also paints less of a racist contrast between the appearances of those lovebirds (who, in the cartoon, pretty much just look like Caucasians with a tan) and the Arab caricatures of other characters, including the Sultan's villainous advisor, Jafar.

Mission accomplished: Marwan Kenzari, the new movie's Jafar, is a handsome fellow, and the only white person in the principal cast is Billy Magnussen playing a goofy European prince. Aladdin (Mena Massoud) and Jasmine (Naomi Scott) are still ultra-wholesome, but their wholesomeness isn't defined by white-sounding voices... except, wait, it kinda-sorta is; Massoud (born in Egypt, raised in Canada) and Scott (British with an Indian mother) speak in flat American accents. (Massoud sounds more than a little like Dave Franco, of all people, minus the notes of gravel.) This version of the fictional Agrabah appears to be somewhat pan-cultural, with Middle Eastern and Indian touches informing the sets and costumes. There's less caricature; there's also more theme-park chintz.

That's the dominant aesthetic here, and theoretically, it's not so different from a junior version of what director Guy Ritchie does to gussy up his big-budget revivals of King Arthur or Sherlock Holmes. But Ritchie's music video cheekiness often gets subsumed by a production where almost everything looks elaborate, expensive, and weirdly fake. The lighting is especially and unpleasantly artificial—is it a green screen handicap, perhaps? The movie's version of sunlight has no warmth or character; instead, it has a white-sky sickliness that also, uncomfortably, seems to lighten up and smooth out the performers' skin.

The genie, though, remains sky blue—a better sky blue than most shots of the sky, for that matter. He insists that he's actually pale from being cooped up in the lamp, that his natural color is more of a navy blue. That wisecrack and others come courtesy of Will Smith, stepping in for Robin Williams and subject of much pre-release derision for his supposedly uncanny valley appearance. I don't know, internet; he strikes me as the most consistent delight in the movie, hamming it up while gamely taking a crack at warbling no fewer than three of the original film's classic Ashman/Menken/other guy songs (ace lyricist Howard Ashman died, far too young, during production).

It's during the songs that Ritchie's cheesy panache and show-offy showmanship come into play, particularly a garish, weird, and very entertaining run-through of the old Robin Williams showstopper, "Friend Like Me." Ritchie has never made a musical, but he has a better sense of how to assemble a musical number than Beauty and the Beast's Bill Condon—even if you feel like, given his affinity for scheming, thieving blokes and elastic camera work, that "One Jump Ahead" should be a little more kinetic, a little more eye-popping (at a few points, characters appear to be moving in Ritchie's beloved slow-motion, but still singing at normal speed? It's weird, and not good-weird like Smith attempting Broadway-style razzmatazz).

Surprisingly, Ritchie doesn't action-up the story and, apart from the musical numbers, seems more comfortable on smaller moments that give him some leeway. There are still tedious recitations from the original film's screenplay, but the filmmakers are able to forestall some of that by briefly reconfiguring the movie as more of a rom-com, adding some welcome back-and-forth to the Aladdin-Jasmine romance, with Hitch himself playing wingman and the always-welcome Nasim Pedrad playing the funny-friend wingwoman. During these passages, it almost doesn't matter that Massoud, while handsome and likable, very much comes across as, well, a bland cartoon character converted suddenly into live-action and forced to forge hasty relationships with real actors. The movie even softens this Aladdin up further with an opening scene that tacitly establishes how he only steals from other thieves, and only to purchase the barest minimum of food. These are not the revisions that Ritchie should be making to Aladdin.

Slightly surprising from such a laddish director (who also co-wrote the screenplay), it's Jasmine who receives the heaviest changes. She sings a new solo song in two parts, both shot in an unobtrusive, single traveling take, and the movie foregrounds her desire to become Sultan after her father (rather than simply her desire to not get married). It's a clear play toward progressivism, interesting in part because back in 1992, Jasmine was touted as Disney's most independent-minded, strong-willed princess yet. This isn't necessarily contradictory; Jasmine can be a progressive cartoon princess for 1992 as well as a character who could use some extra depth and spark in 2019. Taken in the context of Disney remakes, though, it feels like a process of endless revision, adding up to little; not necessarily updating characters for a new generation so much as marketing their newly pumped-up credibility. Princess Jasmine, now with 30 percent more agency!

Still, as cynical and pointless an operation as this remake cycle has often been, Aladdin is a bit livelier than the equivalent Beauty and the Beast (though not as lovely as Tim Burton's recent Dumbo). Its spectacle is intermittent, but also its biggest nostalgia kick. Not back to 1992, mind, because it's hard to compete with a genuine Disney animated classic, but back to when Will Smith was having a lot of fun making silly movies, even misbegotten ones with too much confidence in their shaky ability to crowd-please. Aladdin even sticks the genie in drag for a minute, attempting homage to a moment from the animated original but actually bringing to mind Smith's ill-advised drag act from a big summer movie just about to turn 20, for which I hold an ill-advised amount of affection that echoed as I watched this silly, sometimes awkward, thoroughly unnecessary but not boring Aladdin remake. In other words: Happy almost birthday, Wild Wild West.

Aladdin is out in theaters on May 24.