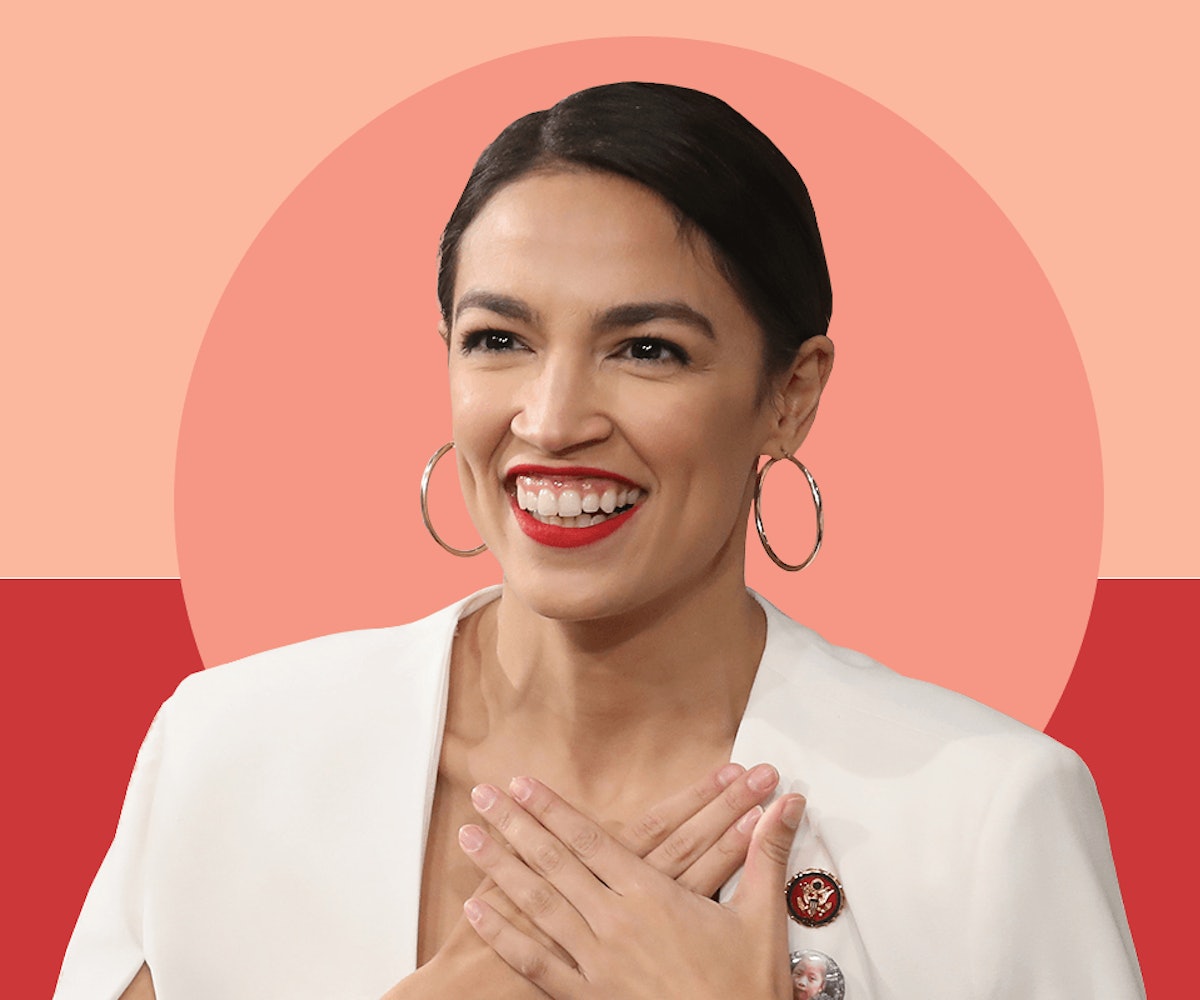 On the day of her inauguration, Alexandria Ocasio-Cortez was sworn into Congress wearing red lipstick and gold hoop earrings. Later that January, she wore the same combination to the State of the Union address. Both times, I was stopped short by her presentation—up until this year, I'd never seen the look in a political setting before, and never in my wildest dreams did I think I would.

Red lipstick, a pair of gold hoop earrings—this is a specific pairing of beauty and fashion hallmarks, even if they're somewhat innocuous choices individually. But when combined, they become an instantly recognizable symbol of Latina culture, a look that both defines and is defined by the Latina experience. For many of us, the look is a rite of passage, one that has often been looked down upon or made fun of (even when it's eventually been appropriated). In fact, there's a popular derogatory saying about hoop earrings: The bigger the hoop, the bigger the hoe. Pair your hoops with red lipstick, and the connotation gets even uglier. That's right, those hoop earrings aren't as light as they seem; they bear the invisible weight of both misogynistic and racially charged criticism.

And this is precisely why it's so amazing to see Ocasio-Cortez wear this look with pride, in venues where it hasn't been worn before. It wouldn't be the same if it were a white woman, who could enter any situation wearing red lipstick and gold hoop earrings and communicate something wholly different than if a black or brown woman does it. There's an unfortunate double standard in beauty that still exists; that certain looks only become "acceptable" when white people wear them. It's a shared narrative that Latinas all over the country can identify with. There are countless times I remember leaving the house as a teenager, proudly wearing both accessories, only to be stopped short by my mom. "Either the earrings or the lipstick need to go," she'd say. "You look too Mexican." This might sound harsh to some, but even back then I recognized it for what it was: a concerned mother's way of trying to protect her daughter from looking "too Mexican" in a world that doesn't always celebrate looking or being anything other than white.

More than a decade later, I still struggle with feelings of having to "dumb down" my ethnicity and femininity by switching out my earrings or toning down my lipstick. As a Latina, I constantly have to make choices about my appearance that are about control, projection, and protection. There's an implicit fear of being seen as too sexy, too frivolous, or too much, and, on the opposite end, too weak or not enough. However, pairing my hoops with red lipstick has always been a favorite look of mine, even if I catch myself questioning it occasionally. Now it's even become a small act of resistance, one made even more important by Ocasio-Cortez's recent actions. It's not a look for the shy, and it's a look that hasn't always been taken seriously in professional settings—that's why seeing it in Congress was shocking, if delightful. It's not just the earrings and lipstick, though: Ocasio-Cortez's entire rise to fame thus far has been steeped in traditionally feminine ways of self-expression that tie into her Latina culture.

When AOC stepped out wearing bright red lipstick during her campaign last summer, she revealed the color she wore via Twitter: Stila's Stay All Day Lip Color in "Beso." She's also openly talked about how she wears braids to celebrate her Afro-Latina heritage, given a mini-tutorial on the press-on nails she uses when strapped for time, given props to women who wear false lashes on the regular, and used Instagram to divulge her multi-step skin-care regimen. These are powerful steps not just for Latinas, but for all women, because AOC is aware that sharing her choices and routines makes her relatable and further negates the toxic belief that spending time on your appearance is vapid or unimportant.

When you're a woman of color, there's so much more to beauty than just wearing what looks or feels good. What you choose to wear or don't wear is going to be ripped apart and translated as some type of hidden message. Ocasio-Cortez clearly knows this and has been using it both to her advantage and to the delight of Latinas everywhere, as evidenced by a statement on Twitter the same day she was sworn in. "Lip+hoops were inspired by Sonia Sotomayor, who was advised to wear neutral-colored nail polish to her confirmation hearings to avoid scrutiny. She kept her red," she tweeted. "Next time someone tells Bronx girls to take off their hoops, they can just say they're dressing like a Congresswoman."

Her words are powerful, but so are her actions: Ocasio-Cortez knew that wearing gold hoops with red lipstick would make her look "a certain way" to the world, and she leaned into it, redefining what the look symbolizes in the process. Nothing Ocasio-Cortez does is apolitical anymore, so every beauty decision she makes now is a calculated risk. She can't just decide to get bangs on the fly, which is probably a good thing because getting bangs on a whim is never a good idea. But there's more to it than just self-care, self-expression, and self-presentation: Her beauty decisions denote solidarity, representation, and pride, and Latinas around the country are recognizing it instantly.

More often than not, Latinas don't get to exist as is; as such, we're no strangers to using makeup as a self-care or survival strategy just to get by in our everyday lives. We employ beauty rituals to help us move through difficult situations, because lipstick and earrings are never just lipstick and earrings. When you feel invisible, and a bright red lipstick makes you feel seen, you're going to wear the hell out of that lipstick. Watching AOC do the same thing, especially in a situation where bright lipstick is traditionally shunned and no one would hesitate to criticize her if her lipstick smeared, gives me hope in a way no other politician has been able to do before.

It's difficult enough to navigate through America without losing sight of your Latin roots; now that we're more than two years into the presidency of someone who openly criticizes and despises the Latinx community, it makes it damn near impossible. When the leaders of our country are attacking your rights, when they're making you feel unimportant and invisible, when they're refusing to pay hardworking citizens as a power play to build a wall "to keep Mexicans out," it's very easy to feel lost and shattered—especially as someone of Mexican heritage.

But every time AOC applies "Beso," I feel a little better, because I can see that she is making conscious beauty decisions that say, "I'm here, and I am not too much, and I will not be ignored." Every time she puts on her hoops, she shows up for Latinas, and every time she shares another snippet of her beauty routine, she shows up for women. By proudly, unapologetically wearing some of the very same items that are so often used against Latinas to make us feel less than, she asserts her power and her identity as a woman of color. She is simultaneously telling the patriarchy to fuck off while giving a knowing wink to Latinas all over the country, saying "I see you girls, I AM you girls, and I am here for you." Most of all, she reminds us of the power we have by simply braiding our hair, doing our nails, or putting on some lipstick and a pair of earrings. The bigger the hoops, the bigger the hope.