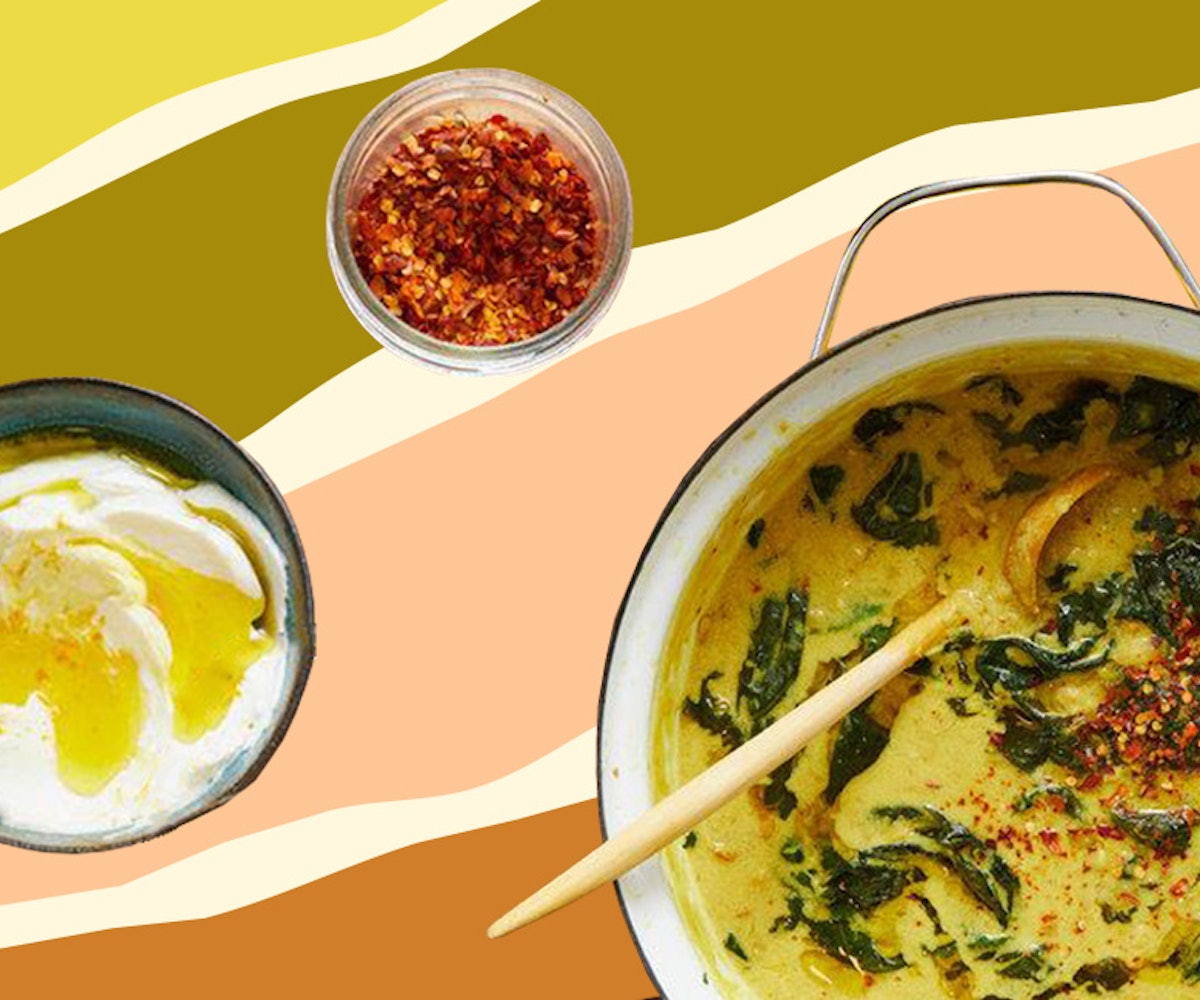 If you've searched #TheStew on Instagram in the past month, you probably found yourself looking at a series of similar images. They might have slight aesthetic differences (filters, angles, etc.), but the central content is identical: a thick and golden broth, topped with chickpeas. There will be yogurt if the user is fancy, mint leaves if they've been watching a lot of Top Chef. All are connected by one thing: a viral recipe.

Alison Roman's Spiced Coconut Chickpea soup was first posted in The New York Times' Cooking section more than a month ago. Since then, thousands of people have cooked, eaten, and raved about the recipe. A skeptic by nature, I decided to try it out for myself.

I'm not much of a cook. My mom is a great mom (hi, mom!), but she didn't spend much time in the kitchen. Neither did her mom and so neither do I. But the beauty and a big part of the appeal of this particular recipe is that it's pretty easy even for the most novice of cooks. To begin with, since it's a stew, you don't have to worry about anything burning or being undercooked. A majority of the time is spent waiting for the concoction to thicken, and the hardest part is probably trying not to cry all over the onions while chopping.

I tend to steer clear of dishes that require buying a whole new pantry of ingredients and spices. But you don't have to worry about that with The Stew, either. The main ingredients are chickpeas, leafy greens, and coconut milk, and the spices—turmeric, red pepper flakes, and salt and pepper—can already be found in most kitchens.

I reached out to Roman before trying the recipe for myself, and her simple but effective advice was, simply, to follow the recipe. "I think part of the reason its become so successful is because everyone seems to have success with it, regardless of skill level," Roman told me.

But like with most things that become popular on the internet, opinions do vary, and some people have pointed out some alleged "flaws" in the recipe, like that they were left with something that had more of a soup-like consistency than that of a stew. To that, Roman says: "I did amend the recipe after publication to indicate that you should be crushing the chickpeas to give the stew more body. The other factors that would contribute would be insufficient simmering time and/or brand of coconut milk—some are thicker than others and what you start with will be a good indication of what you'll end up with (i.e. watery coconut milk will likely give you a looser stew/soupier consistency)."

Roman doesn't know for sure why her recipes tend to go viral (see also The Cookie), but she has some theories. "I think the fact that everyone who makes it has success with it is a huge help," she said. Roman, over the past month or so, has made it a point to repost people's final products which may or may not have contributed to its virality. "People want to see their food look like the picture it's supposed to, and this nearly always does. I've seen hundreds, if not thousands, of pictures of The Stew at this point, and they nearly all look the same, it's great. I also think people are ready for a kind of reset without sacrificing comfort. This dish sits perfectly in the Venn diagram between virtuous and comforting."

It also doesn't hurt that it's really good. I'm not the biggest kale fan (you can also use other greens of your choice), but this wasn't the chewy hipster version of the vegetable. The chickpeas give the stew texture, while the turmeric and spices bring it to life. It's also vegetarian, so you don't have to feel guilty when going for a second bowl.

Unsure if the hype had clouded my thoughts, I asked my two roommates to try the dish, also. One loved it: "It's perfect for a cold winter day," she declared. The other doesn't like turmeric, spicy food, or kale, so her opinion was doomed from the start. Before eating, though, I posted a picture on my Instagram story. It's been nearly 24 hours and, while Roman hasn't reposted my image (sad!), I did receive notifications of a different kind, all more or less asking the same thing: "Isn't it so good?!" and "Can I have the recipe?" To which my answers are: Yes. And, yes. (But you might need a Times Cooking subscription.)