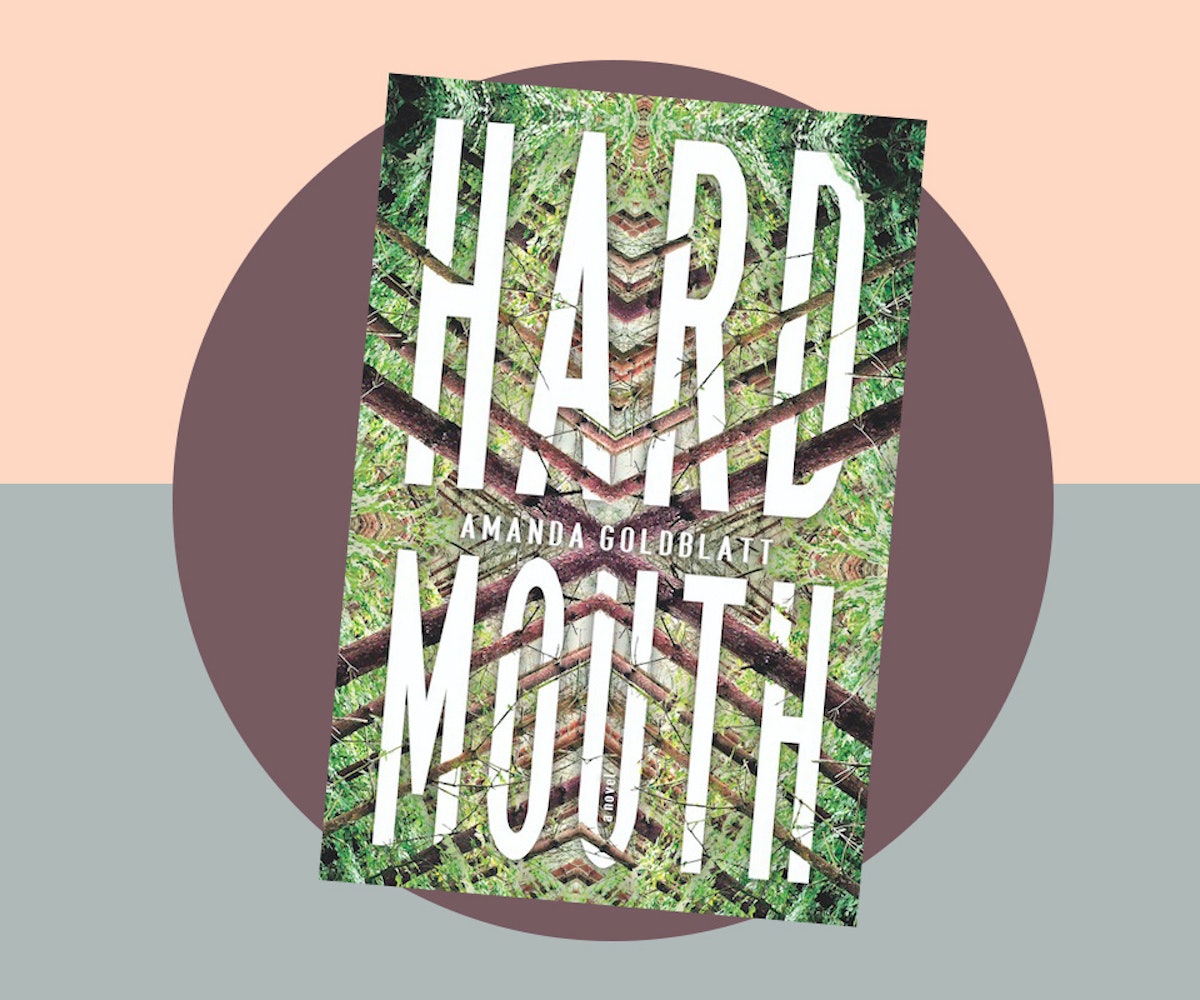 In National Endowment for the Arts fellow Amanda Goldblatt's debut novel,Hard Mouth, Denny trades a life of 20-something aimlessness in the D.C. suburbs for the trials of survival in a cabin on a mountain. She's running away from her father's impending death—the cancer that's been killing him since her adolescence is back, and this time, he's declined treatment to let it "run its course"—but what she finds on the mountain hardly solves her problems. The novel begins existential (think: Camus as an intersectional feminist), and ends with a gut punch that somehow manages a deeply felt sympathy for its characters.

Recently, I spoke with Goldblatt about kids' adventure books, walking the line between being a Millennial and a Gen X-er, and the finality of death.

This book struck me as a survival story in the vein of Into the Wild: young, foolhardy person ventures out into the wilderness, and things do not go as planned. Survival writing is such a male genre, too, so it was refreshing to read a story like this with a female protagonist. What made you write a story like this, and do you consider it a survival story?

The feature of moving from home into the wilderness because of great big feeling was inspired by Eugene Pallette, who is a character actor on which Denny's imaginary friend Gene is based. He started in silent films and moved into talkies and is famous for films like My Man Godfrey. Late in life, he became very paranoid, convinced the Russians were going to bomb Los Angeles, where he was living at the time. So he bought a ton of land and moved to Inaha, Oregon, and only left when he got sick with throat cancer and returned to Los Angeles to die.

I was thinking about the amount of frenzy and feeling and shame that could eject someone from their life into isolation, into the wilderness. I had spent a lot of time when I was younger reading things like White Fang, Hatchet, The Boxcar Children, things where a child ends up in the wilderness, so I think I'm coming more from the trajectory of adventure novels as opposed to survival novels. In adventure novels, there's more of an opportunity for people other than men to take part. Anyone can get lost in the woods. I was interested in merging the impulse for self-escape that I saw in Eugene Pallette's biography with the moment-to-moment survival I had seen in the adventure novels of my youth.

I am interested, generally, in writing about women or non-male people. I think that Denny's relationship to her own gender is not necessarily conventional. I think she has a certain amount of internalized misogyny about what it means to be a girl and that's something she notes throughout the book. And it was important for me less to transfigure a woman as a survivalist than to show a woman with her particular relationship to her gender trying something out that might seem dangerous, something that could be a kind of opportunity for self-removal, and what that means.

Denny and Gene have a fairly acrimonious relationship, which is odd given that imaginary friends are typically around to provide comfort, and typically to a demographic much younger than Denny's. Why is Gene in her life?

Denny's not really capable of self-comfort. She's interested in making things worse for herself. And I think in that trait is the emergence of Gene. I think Eugene Pallette seemed like a really interesting text to unpack and play with. As someone who watched a lot of classic films as a kid, and since I was used to his archetype: an abrupt fast-talker who didn't seem to particularly respect women but liked them, who was in roles of authority but filled them haphazardly. So I think once I combined my understanding of who he was as an actual person with the roles he played, he became a character whom I was almost hypnotized by. I think I became capable of being his ventriloquist in a way I was not accustomed to previously as a writer. I hadn't encountered a character like that who I had no specific connection with. But he felt dangerous and also bouncy. And that combination was, as a writer, really exciting to me. And he just became an inextricable part of Denny and the story for me.

This book is about life and death—specifically one character choosing to live very large while another character is dying. Why set Denny and her father in motion in these ways?

It really became about the question of how to live or exist once you understand what death is. For Denny, this is something that she's been reckoning with since her father began to get sick. So really this final return of the cancer becomes a point at which she has to confront all her thinking about death and living while other people are dying. Which is how she propels herself out of her life. I'm kind of obsessed with the life and death question as a person. I'm not religious; I believe death to be a terminal point of consciousness, and if you're a thinking, embodied person who believes that, it makes life very special and very stressful. And I was interested in letting the character move through those thinking experiences I had had, but in a wider, bigger, more adventurous scenario.

When I described this book to a writer friend, her immediate reaction was, "But why doesn't Denny stay with her father and try to convince him not to surrender to the cancer?" It's a fair question. Your choice to have Denny run away produces a fair amount of expectation-subversion and destabilization for the reader. Why did you make this choice?

I am most inspired by moments that feel destabilized and defamiliarized from my day-to-day life. I'm always looking for aberrations and exceptions. I'm interested in thinking about them, not necessarily why they happen or how they happen but how I can describe them and in what context they were born. And I'm interested in work that does that. I've been thinking a lot about a significant turning point in my relationship to language, which was when I started reading Gary Lutz in grad school. He is someone who creates a great amount of defamiliarization through the language itself and its own internal rules. Like Lutz, I want to find instances of destabilization, of rupture, and then perform them on the page to create essentially what your friend experienced: a moment where someone who's a fiction writer is invested in the plot. A lot of fiction writers don't get rubbed into plot as we read: We're looking at strategies and craft. I happened to find a scenario in this novel that destabilized itself. In the writing process, I work a lot on a combination of staying open, intuition, and experimentation. And so you could maybe call that a purposeful destabilization of thought process where I'm not thinking or doing what I'd be thinking or doing during a normal day. I was, say, going to a densely wooded area and sitting there as opposed to sitting at my desk and writing about trees. So my life was in some way accommodating the experiences that Denny was having.

For a book about a woman dealing with internalized misogyny, there sure are a lot of dudes: Denny's dad, her friend Ken, Gene, the guy she hooks up with (Hill), the proprietor of the cabin (Earl John), and the man she meets on the mountain (Haw). Why so many dudes?

A lot of my 20s was about reacting to dudes. I think that even as I thought of myself as a feminist, a lot of my thinking correlated to the men in my life. And I think that Denny is experiencing a similar thing. I also think she assumes that women will see her as someone who doesn't align with their thinking about what being a woman is. Denny's best friend Ken happened to be a dude. With Haw and Hill, I think she's interested in understanding the mechanisms of her sexuality as a means of individual power. She's a 20-something woman, so in the presence of men she's sometimes seen as a sexual object, and she's figuring out what that means and she's exploring herself through that. Which is another form of self-annihilation, just like going up the mountain without survival skills might be. I think that it's absolutely a question I was asking myself as I was writing the book: Why all the dudes? The book just came out that way. But if you ask me whether my next book will have more women, the answer is yes.

This book stars a 20-something but many of the hallmarks of Millennial life, like social media and fights with Baby Boomers, are absent. But the very Millennial feeling of persistent doom is there without question, just localized to Denny's situation. Do you think of this as a particularly Millennial book? A timely one?

I actually think that despite being one of the oldest Millennials (I was born in 1982), this is more of a Gen X book than a Millennial book. My partner is a couple years younger than me, and he always teases me that I'm a wannabe Gen X member. I grew up idolizing grunge and riot grrl and dyeing my hair colors in the mid-'90s. And the idea of checking out, like Denny does, was perhaps a dominant Gen X narrative.

But I do think of this novel as an individualization of some of what we're experiencing in the current moment, in terms of dealing with firsthand trauma, the trauma of others, fascism, racism, the crumbling of the last protections that vulnerable people have in our country. And how attractive it is for those of us who are still privileged to be spectators, in part. How attractive it is to just leave. But I think, as Denny discovers, and as, hopefully, we will all discover, it's not possible to leave. For Denny, she will continue to be herself and death will continue being the terminal point for us all. For us living in the current moment, we are all going to have to come to terms with what is happening to our country and our planet, and we will have to be more proactive than Denny was in returning to these problems.