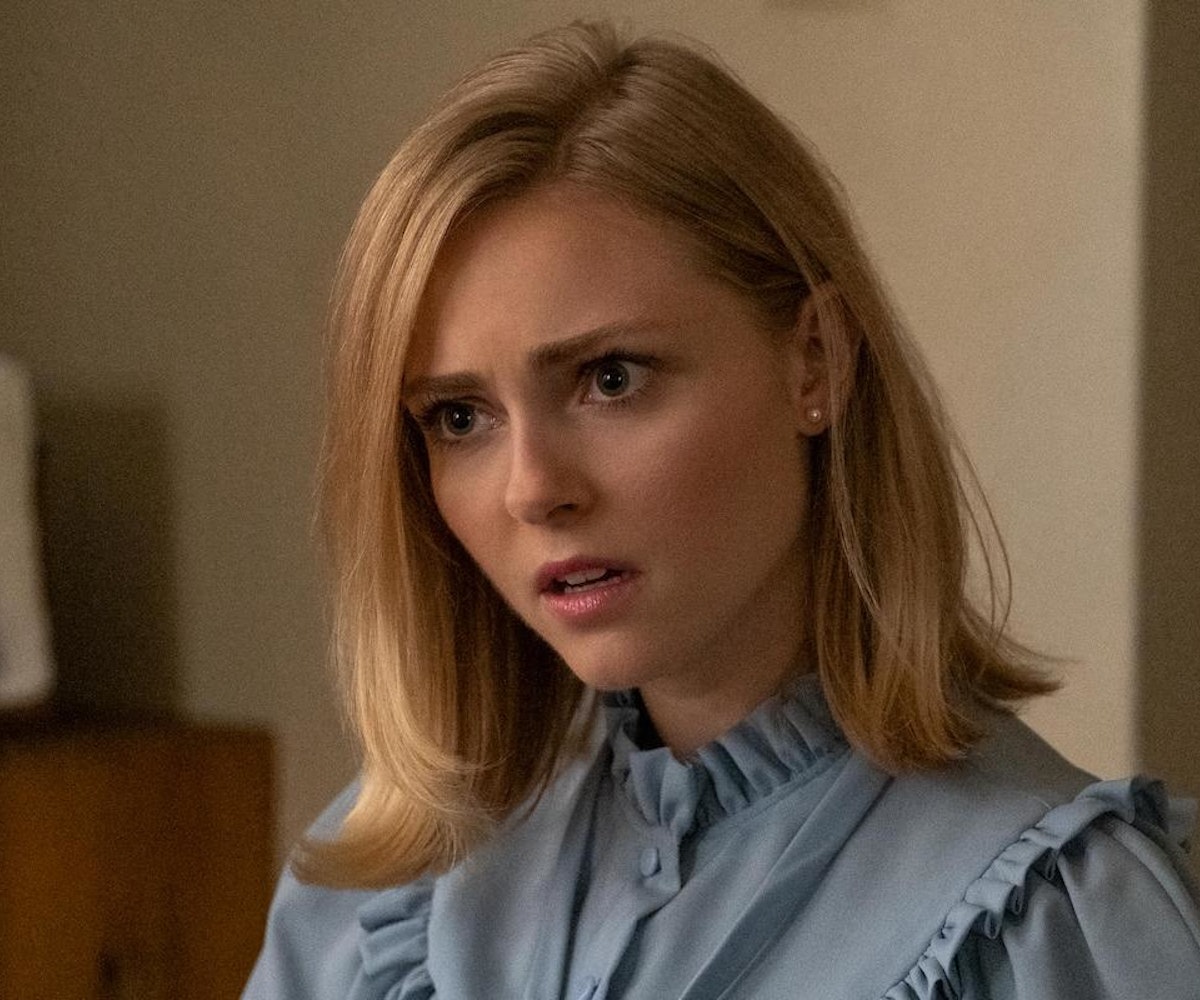 Little Fires Everywhere, the Hulu limited series based on Celeste Ng's best-selling novel of the same name, features Reese Witherspoon and Kerry Washington as Elena Richardson and Mia Warren, respectively — two mothers both at odds with and inextricably tied together through their mysterious intertwined pasts. When two powerhouses like Witherspoon and Washington come together on screen, it's always a treat. But in the series' sixth episode, "The Uncanny," actors AnnaSophia Robb and Tiffany Boone were tasked with bringing younger versions of the characters to life through a series of flashbacks.

Robb (The Act, The Carrie Diaries) expertly took on a younger version of Witherspoon's Elena, embodying both Witherspoon's mannerisms and energy while fleshing out Richardson's backstory. In "The Uncanny," we're transported back to early 1980s Shaker Heights, Ohio, where Elena is a young mother struggling to adjust to a life of suburban and maternal confinement after a series of disappointments, including an unwanted pregnancy. NYLON caught up with Robb to learn more about how she took on the task of bringing a young Elena to life.

Playing a younger version of a character in a flashback is a unique challenge, especially paired with an actress as distinct as Witherspoon. How did you approach the role?

AnnaSophia Robb: I did a lot of different things. I started listening to Reese's book on tape, Whiskey in a Teacup. And then I would just listen to a bunch of interviews, so I could know, sort of, the cadence of her speech. But it was kind of different from the character that she plays. She sounds a little bit more clipped in the show. I listened to her a bunch and watched her mannerisms. And then I was able to shadow Reese on set, which was a huge privilege. It was just such a fantastic show to be a part of. It was run by women, and it was so supportive, and the show tackled a lot of challenging conversations about race, about class, about motherhood and about ugly parts of ourselves that we don't want to see necessarily.

I would sit at Video Village and I would watch Reese's scenes. They gave me the whole schedule and I just circled the scenes that I was like, these are really important. I didn't want to be too lingering when I shadowed her, but Reese was super open and available to talk to me about any questions that I had, or just little things of what I thought she was like as a teenager. Just different psychological questions.

Had you read the book before being cast?

I was huge fan of the book. I read the book before I knew it was going to be turned into a show, and I loved it. That was a huge resource, because everything is sort of built off that and Celeste Ng, she just wrote such complex characters. Then Reese and Kerry embodied them so beautifully and the writers instilled upon these roles... they have depth to them and all sorts of different colors, you know? People that aren't necessarily likable, but they're really complex and their motives are... they want them to come from the right place but often they don't, just like so many of us.

Why do you think the show is taking off as it is and is striking such a chord with fans?

I don't think there are a lot of shows about motherhood necessarily, or middle America. That's sort of been forgotten for flashier shows — procedural shows, for instance. It's not sleepy at all, because there's a ton of drama in it. But I think a lot of people can relate to it, and relate to different characters that they might not expect themselves being able to relate to. You might start finding yourself drawn to a different character that you wouldn't have expected. I think we do have such a race and class issue in our country that I think everybody can speak about whether you are the privileged or the underprivileged.

So it's peeling back those layers and all the complex emotions and experiences that go along with them. I think just high schoolers, what's it like to identify with the different Richardson children, or with Pearl or with Izzy not measuring up to her mother's standards? Or struggling with if you're figuring out who you love and your sexual identity? There's just a lot of different entry points into this story for viewers. I also think a lot of people love and know the book. But this is such a great conversation starter because it's about just people and a suburb and I think a lot of people can relate to that.

Talking about roles relating to motherhood also brings us to The Expecting, your next project coming out.

That was a totally different experience, a very different genre. It's kind of like Rosemary's Baby meets Stranger Things. And Mary Harron, she did American Psycho, is our director and that was very indie, very fast, very curious, intense. I shave my head, I'm pregnant. Well I guess I'm pregnant in Little Fires too. It's so funny, you know, people thought of me as so young for such a long time. And I get typecast as the teenager, a young woman. And then suddenly something happened this year and the last three roles I've played have been mothers. I turned 26 and something changed. Which is kind of crazy. It does feel a bit strange, but it's a lot of fun and they've been great roles. So I feel very blessed.

What has it been like to transition into those more mature roles, for lack of a better word?

I'm pretty excited about what's happening right now. I think there's so much good writing right now. There's so much material, especially in television. I'm curious what is going to happen with film. Especially independent films and bigger films after this quarantine and what that space looks like. But in terms of good writing and great roles, this has been a great time to come of age. I feel like so many women and actresses, Reese especially and Kerry, have paved the way in terms of speaking up for equal pay, and getting really great female leads. Where it's not just a strong female lead, it's somebody who's more complicated. Did you read that Brit Marling piece in the New York Times? She was talking about how she doesn't want to be a strong female lead because they're actually just like a mimicry of masculine characters.

It's a really great piece and I really enjoyed reading it. It speaks to sort of not writing characters that don't necessarily... they don't need to be strong, they don't need to have male characteristics. I think Little Fires does that really well. I've found right now that a lot of the characters that I've been able to play and that I've been reading don't, they're not necessarily strong female leads. They have myriad colors in them and they're very vulnerable. It's not like, it was written for a man and now we're just changing it to a woman's role, a female role.

I really want to produce. I always wanted to do that, even since I was a kid actor. But I think especially after working on Little Fires and seeing the collaboration between on Hello Sunshine and Simpson Street, and the tenacity of [Hello Sunshine's head of television and film] Lauren Neustadter, and how much passion she showed in caring for every detail. And how much power they gave me and encouragement they gave me.

It made me feel empowered to just go after things and feel okay failing. I think that's the biggest lesson I've learned this past year or just since graduating I guess, is that there's not really a rule book. I find myself constantly wanting to be told what to do and that doesn't really exist in the world. I wouldn't call myself a freelancer, but I feel like my life fits into more of a freelancer scheme than a regular job. You just have to make your own path and make mistakes, and then just keep moving forward and trying and failing and working hard.