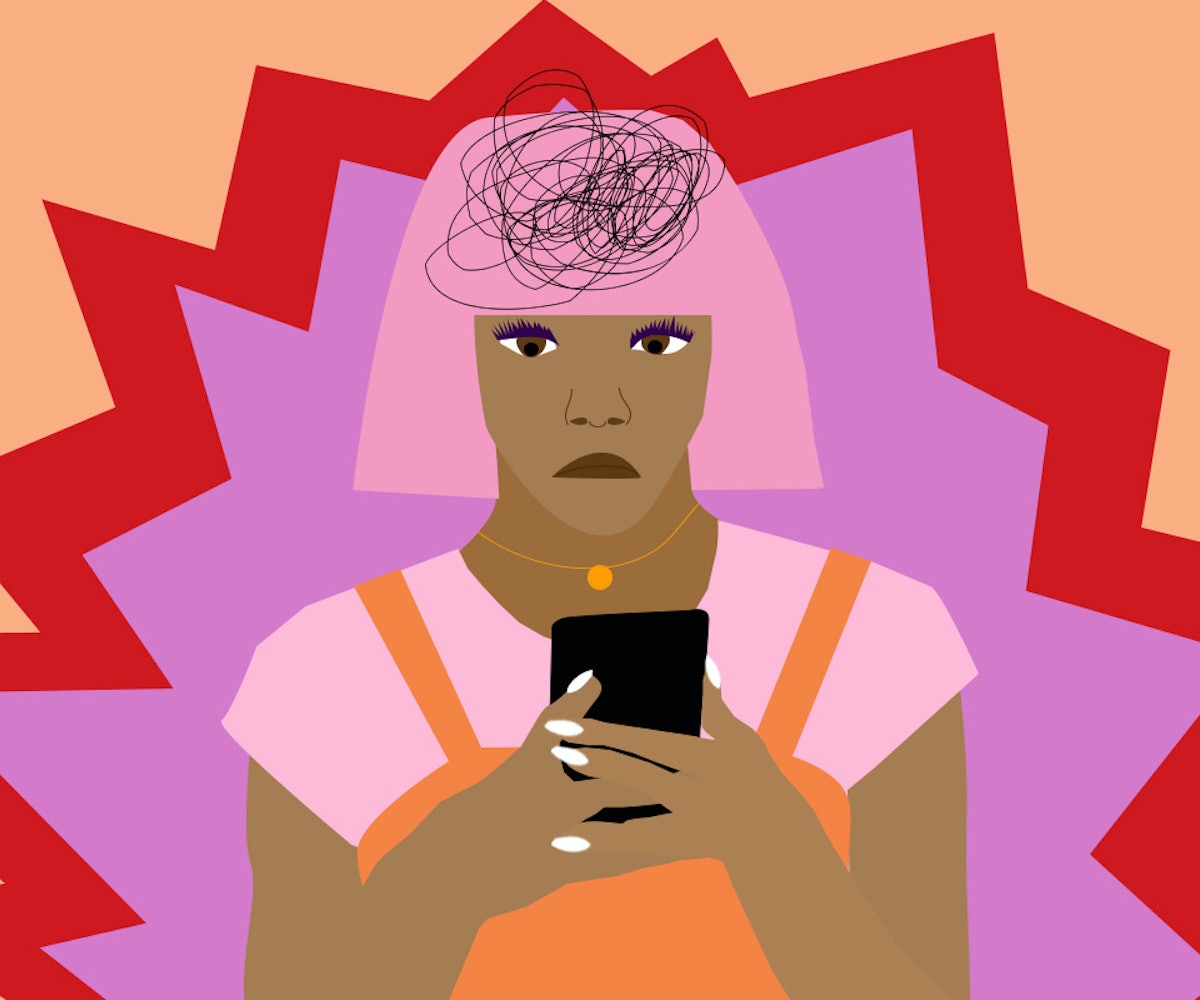 Remember when watching TV, going to the movies, or even scrolling through social media was a soothing, relaxing activity? Okay, maybe not social media. But still. If you're out of your teens, then you're old enough to remember what it was like to kick back at the end of the school or workday, and relax in front of the TV, and just tune out for a while. These days, consuming any media at all can feel exhausting, like taking on extra emotional labor on top of an already psychotic day—especially for someone like me, who's already generally operating at a level 10 of anxiety.

Yet, I'm still doing it, day after day—scrolling, streaming, watching—engaged in a vicious cycle, a hell of my own creation. But is it really my own creation?

It's no secret that the entire expanse of North America can currently be classified as a high-stress environment. Since Trump's election in 2016, we've been deluged with daily, traumatic news stories about, well, you name it: police brutality, white supremacy, immigration horrors, human rights violations, disease, famine, climate change, and the ever-nearing end of the world. And on top of it all, women are unfairly asked to double down on their trauma consumption amidst our society's reckoning with sexual harassment and rape culture. This shit sucks!

Sure, one can and should argue that Twitter, for example, has never not been stressful, but those of us who have been on this hell-app since 2009 remember when the social media site was used predominantly for relatable jokes and mean-but-funny commentary on celebrity culture. These days, signing on to Twitter feels like plunging into the fiery core of the Earth, melting our faces off with heated political arguments and the constant consumption of tragedy.

Scrolling through Instagram can feel even worse, like we're all just ignoring the tragedy we really need to be paying attention to and, instead, posting FaceTuned photos of ourselves in front of shitty, Instagram-friendly wall murals. Most days, I want to throw my phone into the sea, and then follow it in there—and not because I want to retrieve it.

The ever-present nature of social media is overwhelming, but so too is the proliferation of movies and TV shows that purposefully reflect the current sociopolitical climate. Kicking off your shoes at the end of the day and watching TV as a means of escapism feels like a nostalgic concept, not a lived reality. While "consuming media is stressing me out" sounds very privileged—and very 2019—for anyone, like me, who suffers from generalized anxiety, it adds to the feeling that there's nowhere to hide from our wicked world.

All of this has left me reevaluating my relationship to media, and how much consumption is required to be a responsible citizen, but doesn't become irresponsible for a person suffering from mental health issues.

I know I'm not alone. Numerous articles have been written about the phenomenon of Trump-induced stress, including studies and surveys that have been conducted about how the health of Latinos and women, but also Americans, in general, have been negatively affected by the Trumpian political landscape. So, with the current news cycle traumatizing us every day, negatively impacting our mental and physical health, it sucks to feel doubly perturbed when trying to engage in the kind of media that was supposed to provide an escape, and that used to feel safe and comfortable.

I have a complicated relationship with many shows and movies these days. Even as I devoured Euphoria, admiring how it explores very current, important, and unique experiences of queer teenagers, especially those who suffer from mental health issues, I'm happy it's over. What a relief! That shit is heavy. There's a reason I've avoided movies like Blue Jasmine, The Skeleton Twins, or Christine, which are all (brilliant) movies about mental health: They're extremely stressful to watch!

And then there are movies or TV shows that are intended to make you anxious. Like, Black Mirror? Go fuck yourself. Cringe-comedies like Meet the Parents? Not today, satan. And when I posed the question to Twitter, as it turns out, there's a vast array of shows and movies that make people anxious:

Overwhelmingly, the most popular response to my question was The Handmaid's Tale, which is the most nightmarish intersection of real-life politics and our greatest fears realized. Also, a lot of people said Curb Your Enthusiasm, which made me laugh, but also, I get it. If you suffer from anxiety, depression, panic attacks, etc., it's important to recognize when something is further aggravating your mental health, rather than allaying it or helping you grapple with it. For me, being able to make that distinction is vital, because not watching something can be an act of self-care, a preventative measure that can be taken in preventing yet another spiral. I finally understand the draw of watching The Bachelorette—doing so requires literally zero attention. It's crazy to watch something and have so little of an emotional reaction to it, outside of something like, "Whoa, that girl's hair is bananas." What a dream!

These days, I often feel like the "she doesn't even go here" teenager from Mean Girls, who wishes we could bake a cake made out of rainbows and smiles and we could all eat it and be happy… But can't we??? Shouldn't we all be afforded the opportunity to eat a rainbow cake and turn off our screens?? Like, maybe that's the only way to get to utopia—or at least, like, an actual sense of, you know, euphoria, at all.