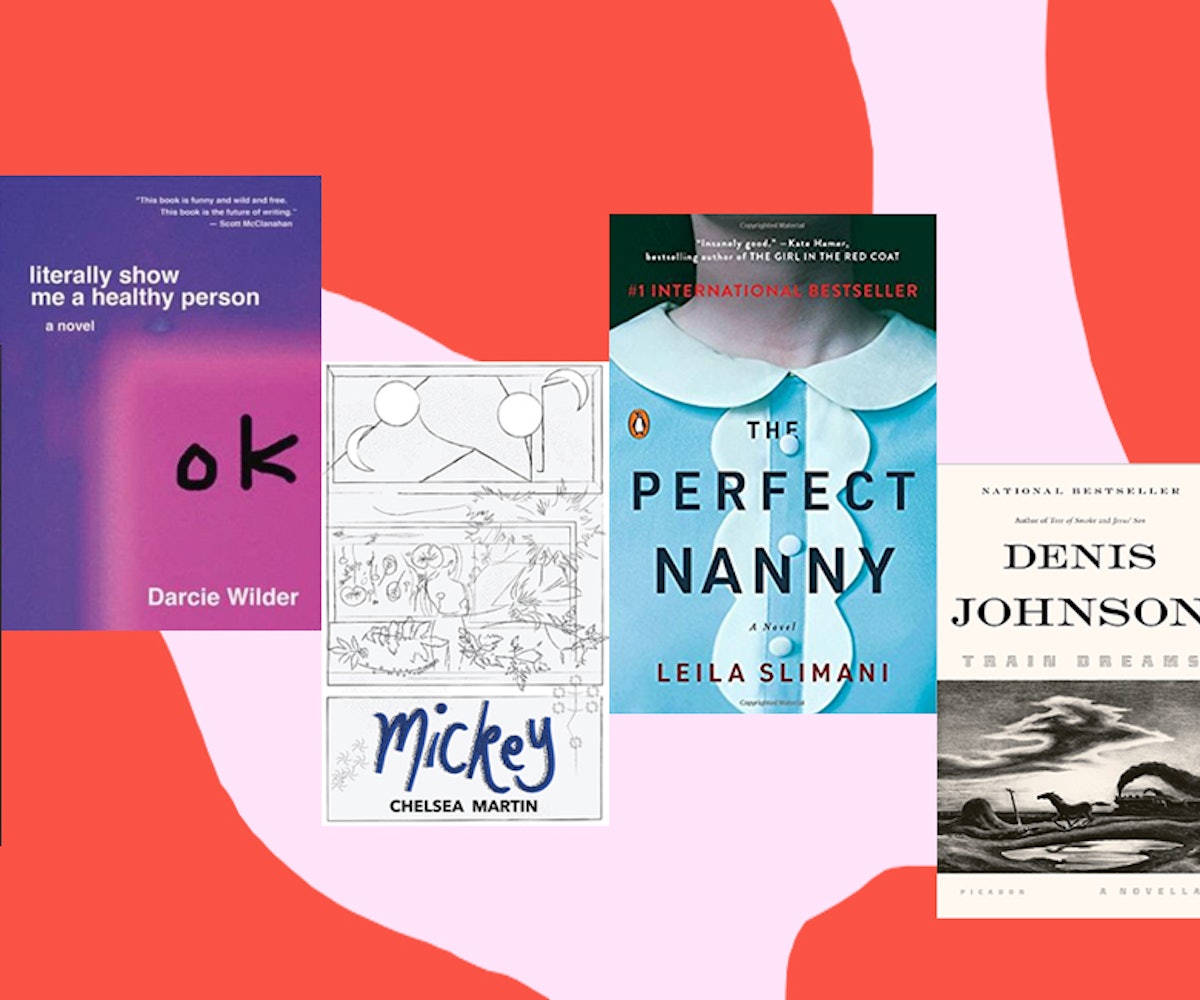 Sometimes it's the smallest things that dig the deepest under our skin, staying with us until they become a part of who we are. The following 10 books are all relatively small, each can—and probably should—be read in a day, even just in one extended sitting. But don't let their size fool you. What these books lack in length, they make up for in impact. Each of these books offers a precise type of beauty; their authors wield real power in their economical use of language. This doesn't mean there isn't room for things to get weird—most of these books get very weird, and invite you to get weird with them. And I strongly suggest you set aside an afternoon or an evening to do just that.

The Babysitter at Rest by Jen George (available here)Comprising five separate stories that operate on levels that are at once utterly surreal and wholly recognizable, Jen George's The Babysitter at Rest is one of the most stimulating reading experiences I've ever had—and that's not merely because it's a book riddled with sex scenes (including one that takes place in the empty grave of a dead racehorse). Rather, this book is stimulating because, after reading these brilliantly warped stories that actually made me cry out loud at times (in sympathetic embarrassment, pain, arousal, etc.), I felt inspired to create things of my own, to be out in the world, weird as it is, to live as uniquely complicated and compromised a life as could be seen within the book's pages. Read it! (Especially if you have any experience interacting with anyone in the art world.)

New People by Danzy Senna (available here)When you first start this novel, you'll think you recognize its basic framework: A seemingly perfect couple have troubles roiling beneath their outwardly placid exterior. You feel like you know what will happen: One of them will have an affair, the other will suspect nothing is wrong. Or, maybe: One of them will think of having an affair, the other will suspect something is wrong. Your projections aren't wrong, not exactly. But Danzy Senna's brilliant, multifaceted gem of a novel is so much more than just its outlines. It delves deep into matters surrounding race, class, groupthink, and the promise of salvation. It offers no easy answers, no unfuzzy future. What it does give readers is an opportunity to think about the lies we tell each other and the lies we tell ourselves, all because we are looking for some semblance of a happy ending.

Peach by Emma Glass (available here)I've written about Emma Glass' stunning debut before, but it's impossible not to want to remind people to read this book if they haven't yet. It's not an easy read—it centers around a young woman, Peach, who has survived a brutal sexual assault, and must learn how to exist in a world that's forever changed. Glass' Stein-ian use of language (the repetition of certain words and phrases can make the reader's head spin in the most profound and beautifully disorienting way) adds to the surreal element of what is an all too real predicament, that of a young woman whose trauma risks defining the rest of her life.

Heart Berries by Therese Marie Mailhot (available here)I read Heart Berries, and then I read it straight through again. I didn't want to feel the absence of Therese Marie Mailhot's voice once I'd been introduced to it. As I've written about this powerful memoir before, in it, Mailhot "reveals a life of struggle and illness, deprivation and pain, but is so full of strength in the face of adversity and resilience, that it is impossible not to read it and feel real hope and the possibility of triumph and renewal, no matter how dark things seem. Mailhot started writing the essays that comprise this book after being hospitalized and diagnosed with both bipolar II and post-traumatic stress disorders; through her writing, she grapples with her traumatic upbringing, her dysfunctional parents, and her own struggles learning how to love. The result is this singularly moving, poetic book, one full of rage and desire, fear and brilliance. Prepare for it to sink its teeth into your very heart."

You Private Person by Richard Chiem (available here)Oh, what a strange, sexy, little book this is. It will have you wondering whether you would categorize yourself as a sociopath or an animal, and it will make you think very carefully about how to approach unwrapping the tinfoil which covers a pie someone has given to you. It will have your mind occupied with thoughts of God and long-distance relationships. It will have you thinking of love and life and language and flying and cities and cigarettes and the length of a Simpsons episode and that song "Lover's Spit." Richard Chiem captures the mundane depravities of being young and alive with lucidity and a touching, weird grace. Everyone should live in his world for a little while.

Literally Show Me a Healthy Person by Darcie Wilder (available here)Maybe you're familiar with Darcie Wilder through her immensely popular Twitter feed (she's @333333333433333), and if you are, this book doesn't need me to give it much of a hard sell, because you're already obsessed with her thanks to perfect tweets like: "purgatory is full of people answering for their crime of 'penning a love letter to their city.'" But if you're not familiar with Wilder, get acquainted immediately, and after scrolling through her tweets, buy her novel and become immersed in the chaotic world of a young woman trying to navigate some pretty fucking difficult terrain, aka a society that demands we perform every last one of our emotions on a public platform, and recalibrate those emotions if we don't get the right feedback.

Long Way Down by Jason Reynolds (available here)Reading this book, you get swept up in its furious rhythm; it propels you forward as if to some preordained future over which you're not sure you have any control. This feeling of momentum, of forces bigger than you, is analogous to the way Jason Reynolds' protagonist, Will, feels as he descends an elevator, a loaded gun in the waistband of his jeans, on his way to seek revenge for his murdered brother. The book takes place over the span of a mere minute, as Will must decide—with the unwitting help of several other people getting on and off the elevator—what path he must take in order to move forward. An especially apt book to read right now, Reynolds' meditation on the plague of gun violence has a cadence that you'll absorb into your body as you read, as if it's an extra heart beating alongside your own.

The Perfect Nanny by Leila Slimani (available here)When a novel starts off with the sentence "The baby is dead," you might think it's an understandably short read because you don't read it, you just shut the book right then and there after absorbing those four horrific words. But even if the premise of The Perfect Nanny strikes at your deepest fears, don't let it stop you from diving into this absorbing story, in which, as I wrote once before, Slimani "uses this most horrific of narrative foundations—murdered children—to explore commonly experienced issues like imbalances in power, breaches in trust, and tensions surrounding class and race. In doing so, she has created a truly chilling story that promises to leave you questioning all your long-held thoughts on motherhood and the different prices paid as women try to achieve something resembling domestic bliss."

Train Dreams by Denis Johnson (available here)While I would strongly recommend picking up Johnson's latest, posthumously published book of short stories, The Largesse of the Sea Maiden, I'd also suggest revisiting his 2011 novella, Train Dreams,which manages to contain the emotional weight of a true epic, all within the span of 116 pages. Train Dreams centers around the life of one man who lives and works in the American West of the early 20th century. He suffers monumental personal losses, but he does so within the grandeur of the wild terrain of the Pacific Northwest, as well as the colossal changes happening in American society at that time, thus putting in perspective the ways in which our humanity feels forever dwarfed by the twin, opposing pillars that loom large over our lives, otherwise known as nature and industry.

Mickey by Chelsea Martin (available here)I once interviewed Chelsea Martin about her excellent essay collection, Caca Dolce, and asked her about how much self-confidence is necessary to become an artist. She told me:

I think it usually requires a ton of confidence in yourself, for thinking you have something valuable to say and present to the world. Just the guts it takes to show yourself as an artist—even if it’s abstract art, you’re still showing a huge part of yourself and what you think is cool and interesting.

My point in mentioning this now, when recommending Martin's novel Mickey, is only to say that I'm glad she has that confidence, because all her work is cool and interesting and I feel cooler and more interesting for reading it, and I think you will, too. (Plus, it really does take a ton of confidence to use a Matchbox 20 song lyric as your book's epigraph, which Martin does in Mickey.) The novella is as reliably weird and funny and smart as all Martin's work and revolves around a young woman just coming out of a breakup. The plot's not the point, though, not really; the point is getting to immerse yourself in Martin's world for a little while, one colored with RoseArt crayons and drawings of Rob Thomas.