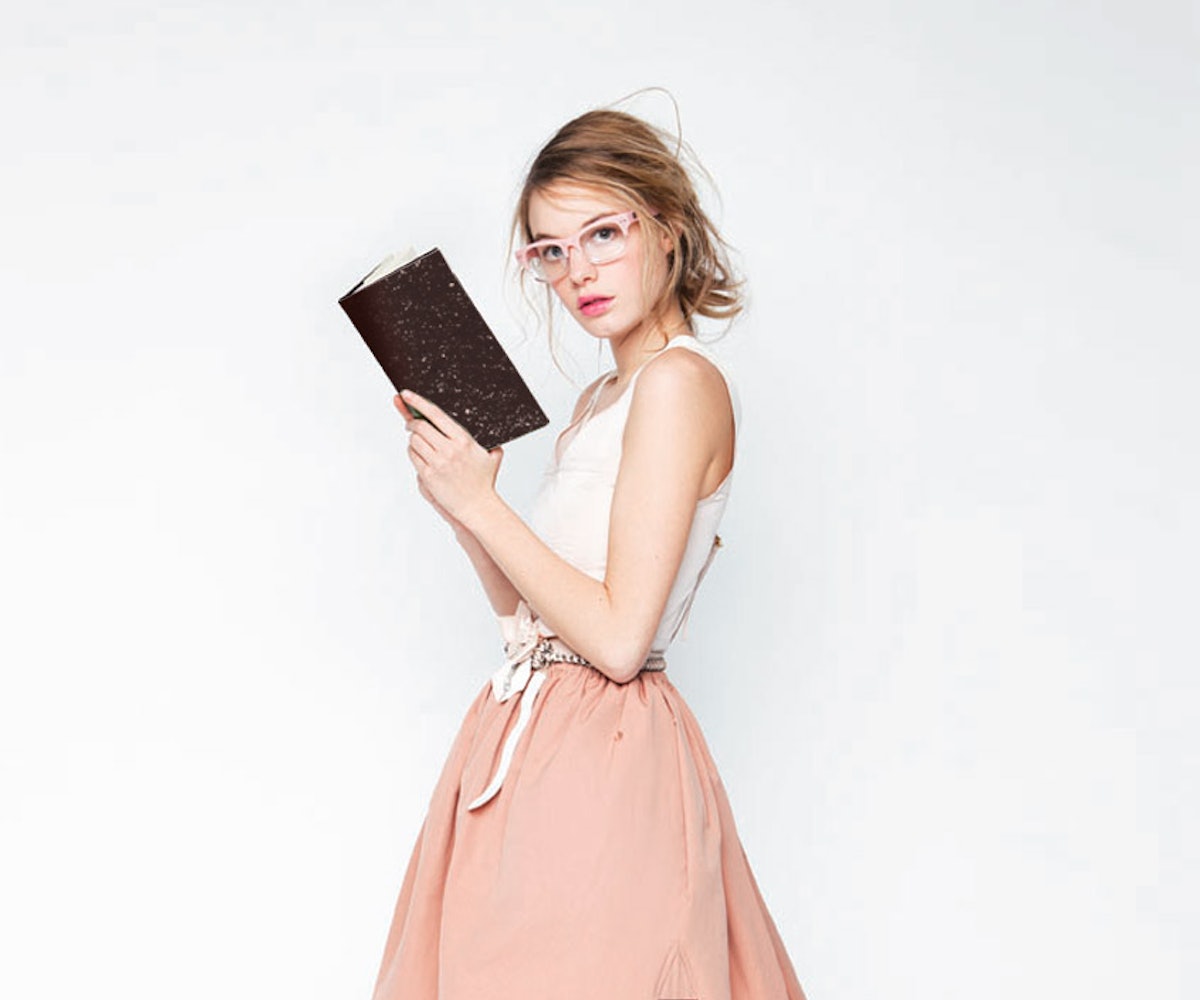 With "Best of 2014" lists popping up everywhere, we've been completely obsessing over the ones that feature rad reads. We know that you've got at least one favorite book that came out this year, too.

Instead of the best books of the year, though, we have to thank The New York Times for their killer list of 100 Notable Books from 2014. Find the entire list below and check the gallery for the three we loved most! Looks like your holiday wishlist just got 100 times longer.

All Our Names by Dinaw Mengestu

All The Birds, Singing by Evie Wyld

All The Light We Cannot See by Anthony Doerr

The Assassination Of Margaret Thatcher: Stories by Hilary Mantel

The Ballad of a Small Player by Lawrence Osborne

The Blazing World by Siri Hustvedt

The Bone Clocks by David Mitchell

The Book Of Strange New Things by Michel Faber

The Book Of Unknown Americans by Cristina Henríquez

A Brief History Of Seven Killings by Marlon James

Can’t And Won’t by Lydia Davis

The Cold Song by Linn Ullmann

Colorless Tsukuru Tazaki And His Years Of Pilgrimage by Haruki Murakami

Dept. Of Speculation by Jenny Offill

The Dog by Joseph O’Neill

Everything I Never Told You by Celeste Ng

A Girl Is A Half-Formed Thing by Eimear McBride

I Pity The Poor Immigrant by Zachary Lazar

The Laughing Monsters by Denis Johnson

Let Me Be Frank With You: A Frank Bascombe Book by Richard Ford

Lovers At The Chameleon Club, Paris 1932 by Francine Prose

The Magician’s Land by Lev Grossman

The Narrow Road To The Deep North by Richard Flanagan

Panic In A Suitcase by Yelena Akhtiorskaya

The Paying Guests by Sarah Waters

The Poetry Of Derek Walcott 1948-2013 selected by Glyn Maxwell

A Replacement Life by Boris Fishman

Song Of The Shank by Jeffery Renard Allen

Those Who Leave And Those Who Stay: Book 3, The Neapolitan Novels: “Middle Time.” by Elena Ferrante

The Wallcreeper by Nell Zink

We Are Not Ourselves by Matthew Thomas

American Mirror: The Life And Art Of Norman Rockwell by Deborah Solomon

Being Mortal: Medicine And What Matters In The End by Atul Gawande

Building A Better Teacher: How Teaching Works (And How To Teach It To Everyone) by Elizabeth Green

Can’t We Talk About Something More Pleasant? written and illustrated by Roz Chast

China’s Second Continent: How A Million Migrants Are Building A New Empire In Africa by Howard W. French

Cubed: A Secret History Of The Workplace by Nikil Saval

Deep Down Dark: The Untold Stories Of 33 Men Buried In A Chilean Mine, And The Miracle That Set Them Free by Héctor Tobar

Duty: Memoirs Of A Secretary At War by Robert M. Gates

Dying Every Day: Seneca At The Court Of Nero by James Romm

Eichmann Before Jerusalem: The Unexamined Life Of A Mass Murderer by Bettina Stangneth

Elephant Company: The Inspiring Story Of An Unlikely Hero And The Animals Who Helped Him Save Lives In World War II by Vicki Constantine Croke

Factory Man: How One Furniture Maker Battled Offshoring, Stayed Local — And Helped Save An American Town by Beth Macy

The Fame Lunches: On Wounded Icons, Money, Sex, The Brontës, And The Importance Of Handbags by Daphne Merkin

Fire Shut Up In My Bones: A Memoir by Charles M. Blow

Forcing The Spring: Inside The Fight For Marriage Equality by Jo Becker

Gandhi Before India by Ramachandra Guha

Geek Sublime: The Beauty Of Code, The Code Of Beauty by Vikram Chandra

The Human Age: The World Shaped By Us by Diane Ackerman

The Invisible Bridge: The Fall Of Nixon And The Rise Of Reagan by Rick Perlstein

The Invisible Front: Love And Loss In An Era Of Endless War by Yochi Dreazen

The Invisible History Of The Human Race: How Dna And History Shape Our Identities And Our Futures by Christine Kenneally

Just Mercy: A Story Of Justice And Redemption by Bryan Stevenson

The Madwoman In The Volvo: My Year Of Raging Hormones by Sandra Tsing Loh

NAPOLEON: A Life by Andrew Roberts

No Good Men Among The Living: America, The Taliban, And The War Through Afghan Eyes by Anand Gopal

Not I: Memoirs Of A German Childhood by Joachim Fest, translated By Martin Chalmers

On Immunity: An Inoculation by Eula Biss

On The Run: Fugitive Life In An American City by Alice Goffman

100 Essays I Don’t Have Time To Write: On Umbrellas And Sword Fights, Parades And Dogs, Fire Alarms, Children, And Theater by Sarah Ruhl

The Short And Tragic Life Of Robert Peace: A Brilliant Young Man Who Left Newark For The Ivy League by Jeff Hobbs

The Sixth Extinction: An Unnatural History by Elizabeth Kolbert

A Spy Among Friends: Kim Philby And The Great Betrayal by Ben Macintyre

The Teacher Wars: A History Of America’s Most Embattled Profession by Dana Goldstein

This Changes Everything: Capitalism Vs. The Climate by Naomi Klein

The Trip To Echo Spring: On Writers And Drinking by Olivia Laing

The True American: Murder And Mercy In Texas by Anand Giridharadas

There's a Built to Spill line from Perfect From Now On: "No one wants to hear what you dreamt about/ unless you dreamt about them." Usually true—but then again, you aren't Lydia Davis. In her new collection, Can't and Won't, Davis handily dismisses this notion, peppering descriptions of her own dreams alongside Flaubert translations, letters of complaint, original short stories, and quotidian miscellanea. As 2009's Collected Stories affirmed, Davis has always been a versatile writer, and in this collection she continues to volley between minimalist and miniaturist, relating the sorrow of aging and death in a handful of sentences or devoting several pages to the daily activities of a trio of cows. From the mundane ("My tea water takes too long to boil") to the devastating ("The Seals," a longer story about the loss of two family members), Davis manages to capture the peaks, valleys, and plains of human experience with equal clarity. In the age of indiscriminate sharing, social media has made us all reporters of minutiae, and while Davis and her narrators are no different, their dispatches cut through the noise with precision, exposing the strange core of human experience. - Jess Sauer, NYLON April 2014

Lorrie Moore, the author whose work was first published at age 19 thanks to a contest in Seventeen magazine, has reached a level of belovedness in her now decades-long career that is normally bestowed upon the long gone. The name of this page, for instance, is not-so-discreetly dedicated to her first collection, Self-Help. Since that book was published in 1983, Moore has tirelessly reported on the lives of girls and women with a kind of ultra-specific insight that has acted as both something grand—"the most irresistible contemporary American writer!" said The New York Times of her—and, if you're talking to her devoted readers, incredibly intimate. Her latest collection, Bark, includes eight stories that are both serious and funny in Moore's typical fashion, but with characters that are a bit more hard-edged than readers may be used to—many of them, it seems, are somewhat less amused by their own unhappiness than the protagonists we've met before. But don't let that deter you. Moore, of course, explained this best at the New York Public Library last year. "The idea of likeability belongs in the world of entertainment, not art," she said. " ‘Like' is the wrong word. A younger generation has substituted ‘relatable,' as in ‘Is this character relatable?’ a word which makes me cringe, but may be closer to the proper concept, as it involves movement toward a person rather than passing judgment while standing apart." - Mallory Rice, NYLON March 2014

It's 1993 in the Eastern European immigrant enclave of Brighton Beach, Brooklyn, where the Nasmertovs—the Ukrainian Jewish clan at the heart of Yelena Akhtiorskaya's debut novel Panic in a Suitcase—now reside. Their matriarch has been diagnosed with cancer, so her prodigal poet son Pasha, the final holdout in their native Odessa, has come to New York for an extended visit (a trip his relatives hope will finally convince him to stay for good). Comically clumsy attempts at bonding ensue, endeavors that are flawed and strange in the way only a family can make them. Meanwhile, Pasha dabbles in the expat literary scene, but still finds himself disenchanted with his kin's new home. Fast-forward to 2008: Pasha's mother has died and he remains in Odessa, now a local literary lion. His son will soon marry and his American niece Frida, in an act of identity-seeking, insists on traveling to Odessa alone for the event. The trip becomes a counterpoint to Pasha's experience of New York—weird and life-altering in ways unanticipated. Panic joins a vast canon of immigrant tales, but its prose truly sets it apart, each sentence bursting with such striking imagery, syntactic complexity, and poeticism that it would do its own protagonist proud. - Lisa Mischianti, NYLON August 2014