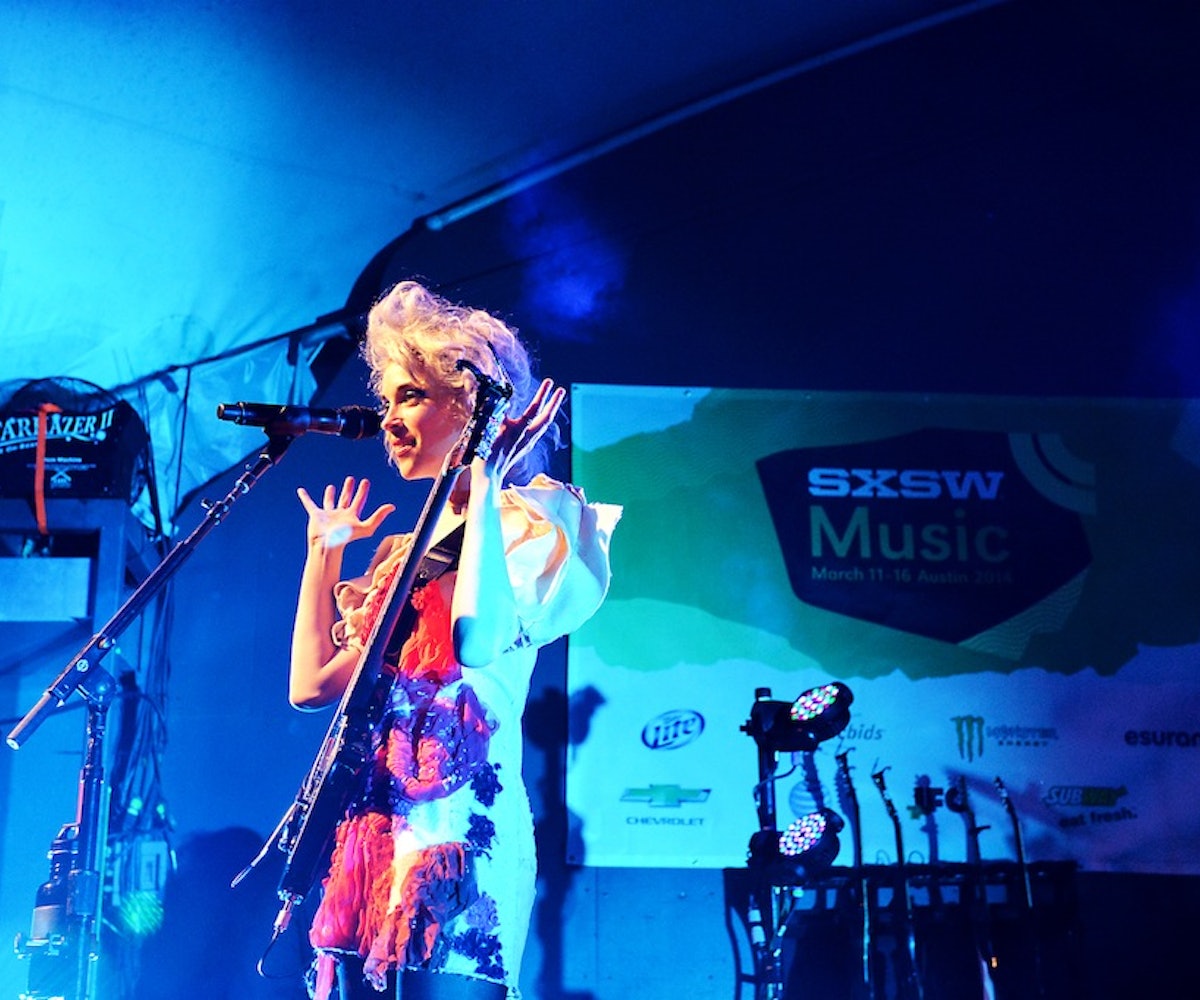 South by Southwest got underway on Friday, with the heart of its film, fashion, and food components unfolding over the weekend. But there is still a ridiculous amount of stuff happening between now and the festival's end next weekend, so follow us as we guide you through some of the essential parties, panels, and performances going down this week in Austin.

• The sheer quantity of panels and discussions at SXSW is completely overwhelming, and it's hard to say which ones will be better than others. But for our money, one of the most fascinating will be "The Celebrity Economy," featuring NY Times columnist Paul Krugman, Arcade Fire bros Win and Will Butler, and more. It will focus on the music industry's most vital question: How do artists support themselves in an industry that is nothing like what it looked like ten years ago? Grantland writer Rembert Browne moderates.

• The Spotify House is a weeklong party and is one of the best places to hang during the festival. They've got a mind-blowing five-day lineup that includes acts like SZA, Twin Shadow, Joey Bada$$, and Run the Jewels, food provided by SUPPER, and daily SoulCycle classes.

• L.A.-based filmmaker Eugene Kotlyarenko is a true eccentric who’s been making idiosyncratic short films and videos for years. A Wonderful Cloud, which had its world premiere at this past weekend and will be screening during the week, marks his second feature and stars indie darling Kate Lyn Sheil as a girl who returns to LA. and reconnects with her ex, played by Kotlyarenko. It might sound conventional, but one look at the film’s trailer shows otherwise. And for an extra layer of intrigue, the filmmaker and his star used to date IRL. Check here for screenings.

• At SXSW, the panels can get hyper-specific. Case in point, this one about becoming and being a female journalist in the hip-hop world. MTV News' Nadeska Alexis, writer Kathy Iandoli, and writer Georgette Cline, talk about what it's like to be a woman covering a male-dominated industry.

• Marina and the Diamonds has a new album on the horizon, so expect plenty of new material when she headlines the Friday night showcase at Stubb's, which also features Swedish star Laleh, and Jack Antonoff's pop explosion, Bleachers.

• One of the great joys of SXSW is day drinking in the sun at a packed venue with great music. As always, the Pitchfork Parties, happening on Wednesday and Thursday, will be one of the best and most popular places to do this. They're free and open to the public, which means they'll be very crowded. Plan accordingly.

• Some crafty entrepreneurs are capitalizing on the Health Goth craze by creating their version of what a Health Goth gym might actually look like. The pop-up will be up and running on Friday, followed by a party on Saturday.

• Jimmy Kimmel is bringing his show down to Austin for a five-night stand, with guests like Kevin Hart, Julia Louis-Dreyfus, the entire cast of The Walking Dead, and on Friday, none other than Kanye West. Tickets will not be easy to get, but it is possible.

• The keynote speech is one of the cornerstones of SXSW, and this year Snoop Dogg will be taking the stage on Friday to talk about his upcoming album BUSH, and singular career as a pop-culture icon.

• As part of SXStyle, the festival's inaugural foray into the fashion industry, many panels explore the intersection of fashion, technology, and art. And while most of these events happened this weekend (NYLON will be hosting the official closing party on Tuesday), there are still a few left, like "Is There Still Room For Fashion Blogging?" and "How to Keep Your Social Media Game Sincere."

• Chicago rapper Vic Mensa has been on the brink of stardom for a while now. Then he appeared alongside Kanye West for a performance of "Wolves" on the SNL 40th anniversary special, and the prophecy was finally fulfilled. Mensa is playing a 1am set this Tuesday at The Main, and it's going to be bananas.

• It wouldn't be SXSW without the annual Fader Fort, brought to you by Converse. The four-day, invite-only affair is always one of the best parties in Austin, and given that the lineup is curated by the Fader editors, it's consistently excellent and very, very hip. Standouts this year include Tink, Hudson Mohawke, Chance the Rapper, Wolf Alice, Dej Loaf, and Bleachers, and that's just scratching the surface. As is custom, special guests are promised, and since Kanye West will be in town, it's not insane to think he might show up.

• Protein Journal  and Dazed are teaming up with Grey Goose for this Women in Tech panel that'll be held on Monday afternoon at the Soho House pop-up. Speakers will include Elizabeth Gore, Entrepreneur in Residence at technology giant Dell; Leslie Bradshaw, co-founder of product development group MadebyMany, Emma Sutton, marketing director at lifestyle bible Dazed Group, and more. Topics will include sexism in the tech industry, and gender politics in the start-up game. You won't want to miss it.

• You could argue that no act broke out bigger in 2014 than Mississippi rap duo Rae Sremmurd. That's why their midnight set this Wednesday at the Empire Garage will be one of the hottest tickets—and best parties—all week. Get there very, very early.

• This is not an easy ticket—in fact you need an invite—but it's rad nonetheless. Gia Coppola and Dazed are hosting a dinner at Soho House in honor of Females First, an initiative launched by the British culture bible to "support emerging female directors and film talent." Later in the week, Dazed will be hosting a Females First panel at the W Hotel with Jenn Byrne, their head of video.

• The Illmore is widely known as the best party at SXSW. It goes down in a mansion, is highly exclusive, and can get pretty bonkers. It's also not impossible to get in to. You can request an invite on the official website and cross your fingers. Last year, artists like Schoolboy Q, Skrillex, Bun B, Big Sean, Steve Aoki, A$AP Mob, Travis Scott, and Future all showed up to perform at one point. Expect this year to be no different.

• T Rex is the story 17-year-old female boxer Claressa “T-Rex” Shields and her quest to win gold against all odds at the 2012 Olympics. The doc premiered to raves on Saturday night, and will be showing again on Wednesday night.

• At its core, SXSW is about discovering new talent. There are too many acts to choose from, but may we suggest the retro dream pop of Shura, the throwback soul of Leon Bridges, and the punky vibes of Girlpool as a good place to start.

• SPIN and Axe White Label are responsible for giving us John Legend's only SXSW performance at their party on Saturday at legendary Austin venue Cheer Up Charlies. He'll be headlining a diverse lineup that includes ASTR, YG, and the Zoe Kravitz-fronted rockers, Lolawolf.

• The inaugural Tumblr IRL series at Ironwood Hall combines six musical acts with a different art to create a hybrid of live performance and installation. ODESZA—who seem to be everywhere this year—along with Twin Shadow and Travis Scott are among the performers.

• Venerable rum brand Sailor Jerry is paying tribute to its namesake Norman "Sailor Jerry' Collins, considered by many to be The Godfather of the American Tattoo, by showing his entire collection of original flash, art, and sketches for the first time in the U.S. Find information on the event which runs from Thurs to Sat, here.