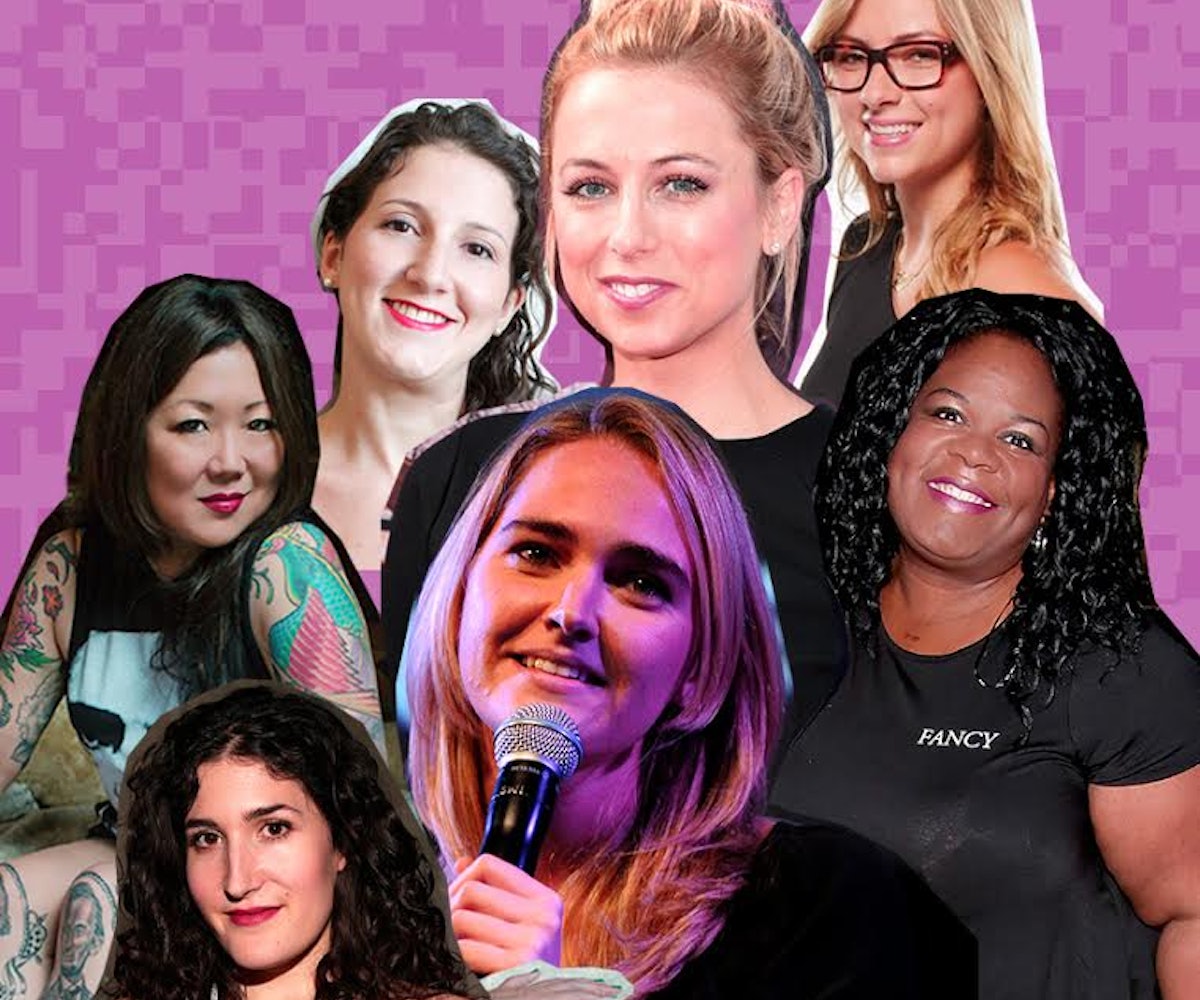 The New York Comedy Festival wrapped up last weekend, and among its stellar lineup of professional laugh generators were some of the funniest women on the planet. And yes, despite the blinding success of names like Schumer and Silverman, being a woman in the male-dominated comedy world is still very much a thing, and it has affected female stand-ups from the moment they picked up their first mic. We asked seven of these women—all of whom killed it at the NYCF—about what being a woman who makes people laugh for a living has meant to them, for better and for worse.

"One time I got my period while I was performing! It didn't really show that much, so it wasn't like a London Marathon situation (I love that woman, btw) in that it wasn't that bloody. But it did affect my performance! I was suddenly taken out of the moment and I was wondering if i should just bring it up and start discussing it right then and there, but it didn't bleed enough to be seen! I tried to push it out so I could show the audience, but it was just that first day thick, mucus dark brown that wouldn't budge. So I just ruined my pants and was unable to make a point about my period, an opportunity lost and will likely not happen again because I'm pretty well into menopause."

“My moment where I feel my gender affects me positively is anytime I'm on a lineup of all men, which is 99% of the time. I think women in comedy have it hard because, ya know, people are horrible to women. That being said—and I've said this since I started comedy—as a woman I have a profound opportunity to stand out every time I get on that stage. When I'm up there with five 30-something white guys talking about being stoned and their annoying girlfriends, I am the outlier, and if my set is good I will be the one the audience remembers. On a competitive and personal note, I take the opportunity very seriously. Knowing that that stage time—whether it be a 10 minute set or an hour—is my time up there to say something not based in shock humor, but rooted in honesty and representative of who I actually am and what I'm capable of expressing not just as a woman but as an artist, is the most important thing.”

"In January 2013, Amy Schumer posted an ad for a female comic to live in her apartment for three months while she was on the road—for free—and she picked me! At that point, I had been a New Yorker for two weeks total, bombed my first club audition, been accused of 'brown nosing,' and had run out of money. Fear and doubt were creeping in and then BOOM—just like that I was being supported my number one role model. This experience has been a constant reminder of the power of having faith in myself, others, and infinite possibility. Amy's generosity, support, and commitment to sisterhood helped make my fantastical dreams a reality. I am grateful to be a woman and grateful for leaders like Amy for paving the way, not only in her personal successes but for clearing the brush for her sisters (and brothers). When I get knocked down I remember that the baddest bitch in the game believes in me, and I get back up. Inside Inside Amy Schumer's Apartment is my favorite credit to date—I mean, we'll see what happens in the NY's Funniest Finals on Sunday. I am a comic first, but being a woman can only help—and besides, win or lose, I get to blame my period."

"It's hard to pick just one! But I do remember the first real show I was ever booked on. It was in Chicago and I was 23 years old and excited to have been booked on a real show, but also wary because the booker was a known sex offender (not a joke, he actually was on Chicago's sex offender registry, but a really nice guy nonetheless). Anyway, I was just starting off my set when a heckler in the back of the crowd yelled, 'Suck my dick!' I didn't have the stand-up skills at the time to shut him down, so I kindly said, 'No thanks,' and walked off stage. It's not my proudest moment or the funniest anecdote, but looking back on it I'm pretty sure the experience may have played out differently if I had been a different gender. Who knows? Had I been a guy, perhaps I wouldn't have even gotten booked. I should also mention, at the time I identified as female—now I prefer gender-neutral."

"There are always advantages and disadvantages to being a female in comedy. Some of the advantages come when there is a show that is heavily populated with male comics and they need a female to give that 'something for the ladies' feel. I've gotten plenty of gigs that way. There are disadvantages, like when men bring you to the stage as a female. Introducing you with preambles like, 'Are you ready for a lady?' and 'We got a woman coming to the stage,' as if they have to preface I'm a female so that the audience can lower their expectations of funny. Overall, I have no problem with being a woman in comedy, especially a funny woman! We have a great community of women who support and love each other and that is a love you can't buy through therapy or drugs!"

"My gender has affected my every waking moment since birth, and I resent that fact that I've never once heard a cis-man questioned about how his gender or his privilege has affected his experience in comedy. I feel like being a woman affects my comedy each time I do stand-up, when my hand can't help but curl into a pussy-like channel and envelop the mic (much like a vagina envelops a penis).”

"When I got into the Montreal comedy festival in 2012, it sorta launched my career. I remember being so happy that I had worked so hard and was being rewarded. That's why it sucked when I found out recently that there was a rumor going around for years that I had fucked the booker of the festival and that was how I got in. The worst thing was that it was another female comedian who started it. Part of me was obviously super insulted, because if people believe that bullshit, then everything I get in my career can be traced back to, 'Oh, she is only succeeding because she banged a guy in a fedora.' And the other part of me was flattered that people think I'm good enough in bed to be gifted with opportunities. The only thing I've ever gotten from sex was crabs once in college. If I was a dude, no one would ever spread a rumor like this, and if they did, it would end with a high five and an 'awesome!'"