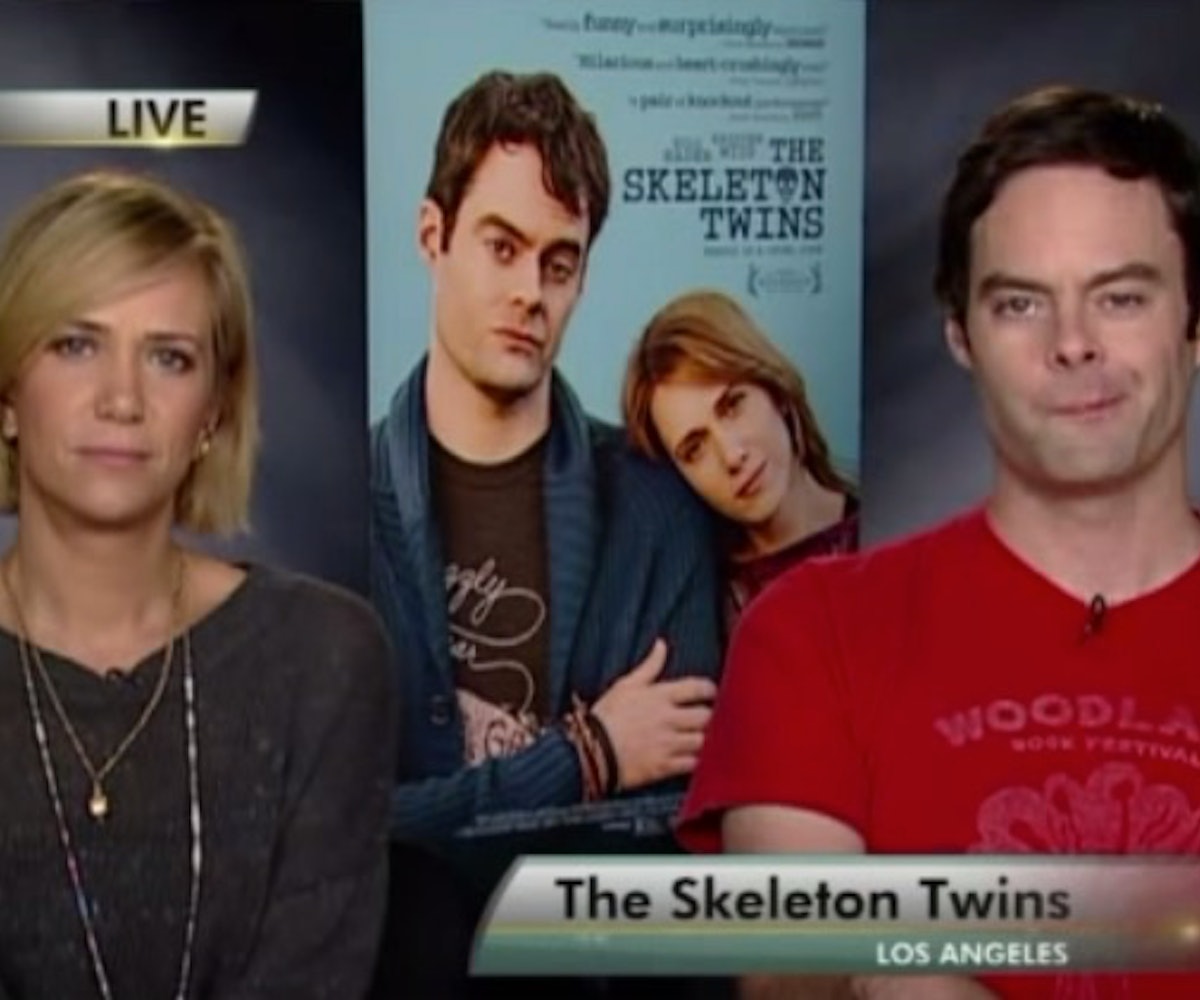 It's been a strange couple of weeks in the weird world of movie promotion. There was Cara Delevingne's uncomfortable interview that set off an Internet-wide referendum on whether she was an entitled, bratty celebrity, or a refreshingly honest one with a low threshold for bullshit. There was Amy Schumer's heroic takedown of a sexist reporter that further cemented her status as a crusader for all women. And then there was that racist encounter between the cast of Fantastic Four and some asshole hosts from Atlanta that pretty much encapsulates the disastrous roll-out of that illfated movie. All of this got us thinking about the car-crash moments between celebrities and their interviewers. Here are some of the best.

The interview that launched Jesse Eisenberg’s reputation as a deeply uncomfortable movie promoter. Eisenberg is whip-smart and his brain runs on nitro, and here you can see him trying to stop the words from coming out of his mouth but failing by nano-seconds. Kudos to the interviewer, Romina Puga, for holding her own in the face of such stone-cold ruthlessness.

On screen, Bruce Willis has often played a curmudgeon, so during this interview for his actioner, Red 2, he slipped quite nicely into the role, like a beaten-up pair of Levi’s. Willis must have been at the tail-end of a long, exhausting press day and just wasn’t feeling it. When he confesses, “I can hardly keep my mind on this interview,” he’s pretty much summing up a feeling that every junketeering actor has felt at one point in their career. Thank god Mary-Louise Parker is there to keep this from becoming a full-on disaster.

Pissing off Robert Downey Jr. can’t be easy, but leave it to “syphilitic parasite” (his words, not ours) Krishnan Guru-Murthy to get the job done. After grilling the star on Iron Man’s role in The Avengers: Age of Ultron, talk turned to Downey Jr.’s well-documented history with drugs and the law. He was willing to talk about it to a point, but Guru-Murthy, sensing a viral moment on his hands, just kept on pushing and eventually got exactly what he wanted.

Michael Parkinson is one of the most respected journalists in the entire U.K., so you wouldn't expect one of his celebrity encounters to end up on this list. But when he spoke with a combative Meg Ryan back in 2007, the legendary interviewer wasn’t having any of it. He called Ryan out on her distaste for the process, based on her body language alone.

What’s great about this interview is that after the “reporter” mistook Samuel L. Jackson for Laurence Fishburne, the actor would have been justified telling him to fuck right off and storm off set. Instead, he took the opportunity to mercilessly shame the embarrassed host on live TV, proving once again why Samuel L. Jackson is the baddest mother of them all.

This interview gone awry isn’t awkward so much as it is terrifying. Mike Tyson was in Toronto promoting his Broadway show, and when the host brings out the fact Mike Tyson is a convicted rapist, the former champ snaps, dropping several F-bombs on live TV. It’s miraculous the host doesn’t disappear into a poof of dust like the rest of us would, and it’s a real testament to Iron Mike’s maturity that he doesn’t tear the host limb from limb, or, you know, bite off his ear.

If you’re interviewing an actor, there’s no bigger faux-pas than pretending to see the movie and getting caught. That's exactly what happened with Denver's Chris Parente, who, to make matters worse, asked Kristen Wiig what it was like going full-frontal in The Skeleton Twins. Wrong movie, bud. But instead of getting upset, both Wiig and her costar Bill Hader basically could not stop laughing at a situation rapidly spiralled into absurdity.

It's a lot easier to say dumb things over the phone, which is what happened when a douchey Australian host made a crack about Cameron Diaz's BFF Drew Barrymore's history with drug abuse. Diaz, rightfully, got defensive about her friend, and after the host made another snide remark about her relationship with Benji Madden, Diaz became fed up and abruptly put this awkward interview to sleep.

Mel Gibson doesn't do press often, and it's not hard to see why. As the haver of one of the biggest meltdowns in Hollywood history, it's hard to imagine Gibson is eager to get in front of nosy reporters. But that's exactly what happened back in 2010, when WGN-TV reporter Dean Richards felt compelled to segue away from the movie Gibson was promoting and into his alleged anti-semetic rants. The interview ends the only way it could—with Gibson calling Richards an asshole.