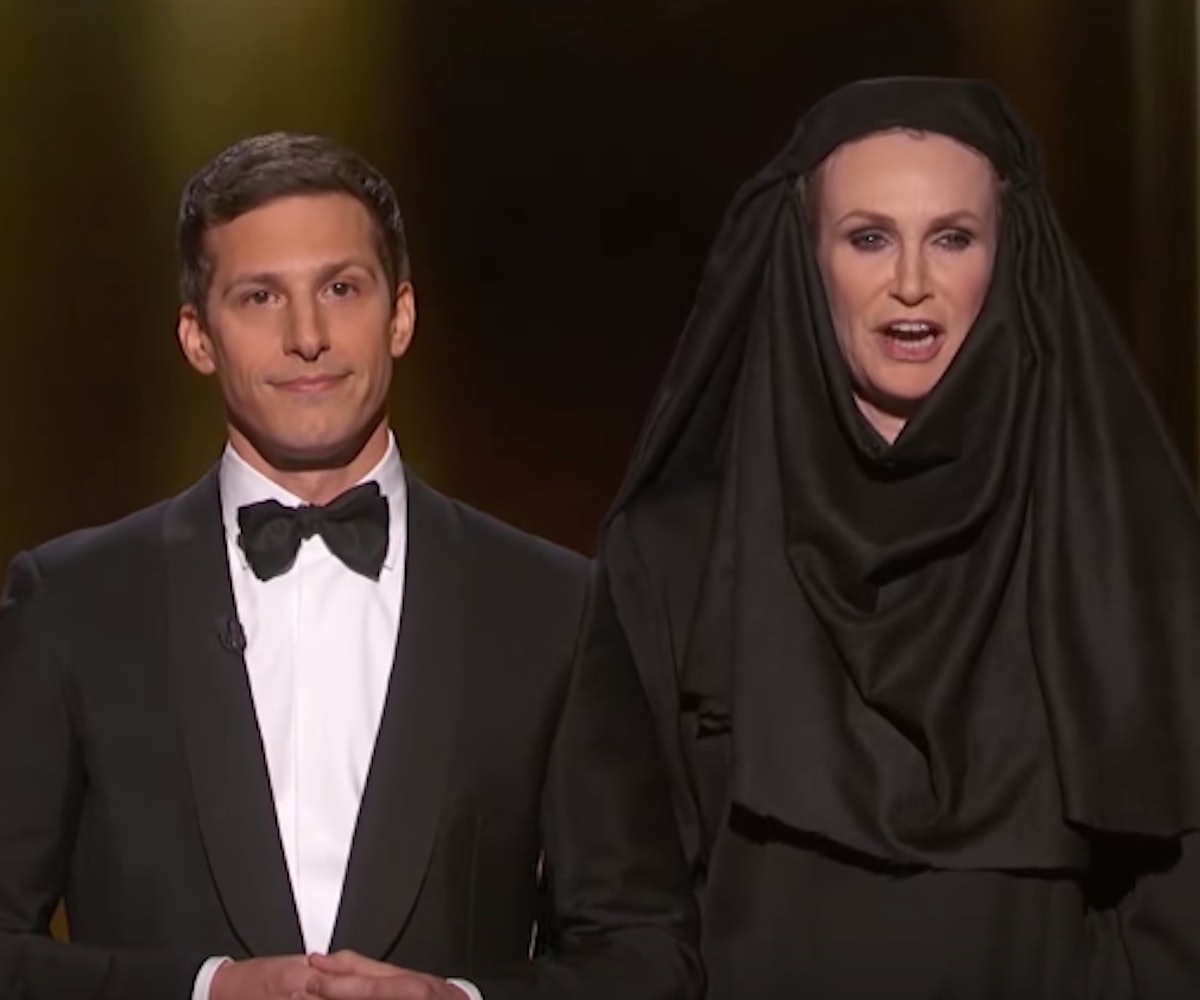 Last night's Emmys had their share of emotional moments, historic victories, and spoilers galore. But they also had their fair share of spontaneous, hilarious, and surprising moments that reminded us why we watch awards shows in the first place

Uzo Aduba breaks down while accepting her award. The Orange Is The New Black star became the first woman to win an Emmy for the same role but in a completely different category, on account of her show being nominated as a drama this year rather than a comedy. While on stage, Aduba was overcome by all the feelings, and it was a joy to watch.

Amy Schumer thanks the makeup artists who gave her smokey eyes. You knew Schumer would kill it when she accepted her Emmy for Best Variety Sketch Series, and along with thanking everyone who helped her achieve this victory, she gave a shout out to the makeup person responsible for her smokey look.

Julia Louis-Dreyfus takes a shot at Donald Trump. Winning for the fourth consecutive year for Veep, Louis-Dreyfus couldn't resist using her platofrm and status as our most ridiculous fictitious president to land a clean right hook on The Donald, who was a punching bag all night. "What a great honor it must be for you to honor me tonight," she said, before correcting herself. “Oh wait, oh no, no, no, I’m so sorry. Donald Trump said that. It’s getting trickier and trickier to satirize this stuff.”

Andy Samberg: "Here is my impression of the last season of Girls."

Jon Hamm crawls on stage to accept his award. After finally winning the Emmy for Outstanding Lead Actor in a Drama Series after eight nominations, Hamm was so shocked that his legs gave out.

Amy Poehler and Amy Schumer get glammed up before their presentation. It was weird seeing Amy Poehler do a comedy bit at an awards show with someone not named Tina Fey, but she and Schumer killed it, including this hilarious moment where they had a crack glam team fix their hair and makeup before getting on stage.

Andy Samberg gives out his HBO Now password. Obviously, the second Samberg "jokingly" gave out his login info for HBO Now—khaleesifan3@Emmyhost.com; password: password1—millions of people watching tried to see if it worked. Well, it did.

Matt LeBlanc flips Jimmy Kimmel the middle finger. When Kimmel presented the award for Outstanding Lead Actor in a Comedy Series, he cut out the name of the winner and ate it, joking that he could now give the Emmy to whoever he wanted, even Matt LeBlanc. "I can give the Emmy to whoever I want," he jokes. "If the card says Louis C.K. and I say the Emmy goes to Matt LeBlanc, what are they going to do, stop the show? Are Ernst & Young going to hop on stage and wrestle the Emmy away from Joey Tribbiani? I don’t think so." During the commerical break, LeBlanc let Kimmel know what he thought of the gag, which Kimmel then shared on Twitter.