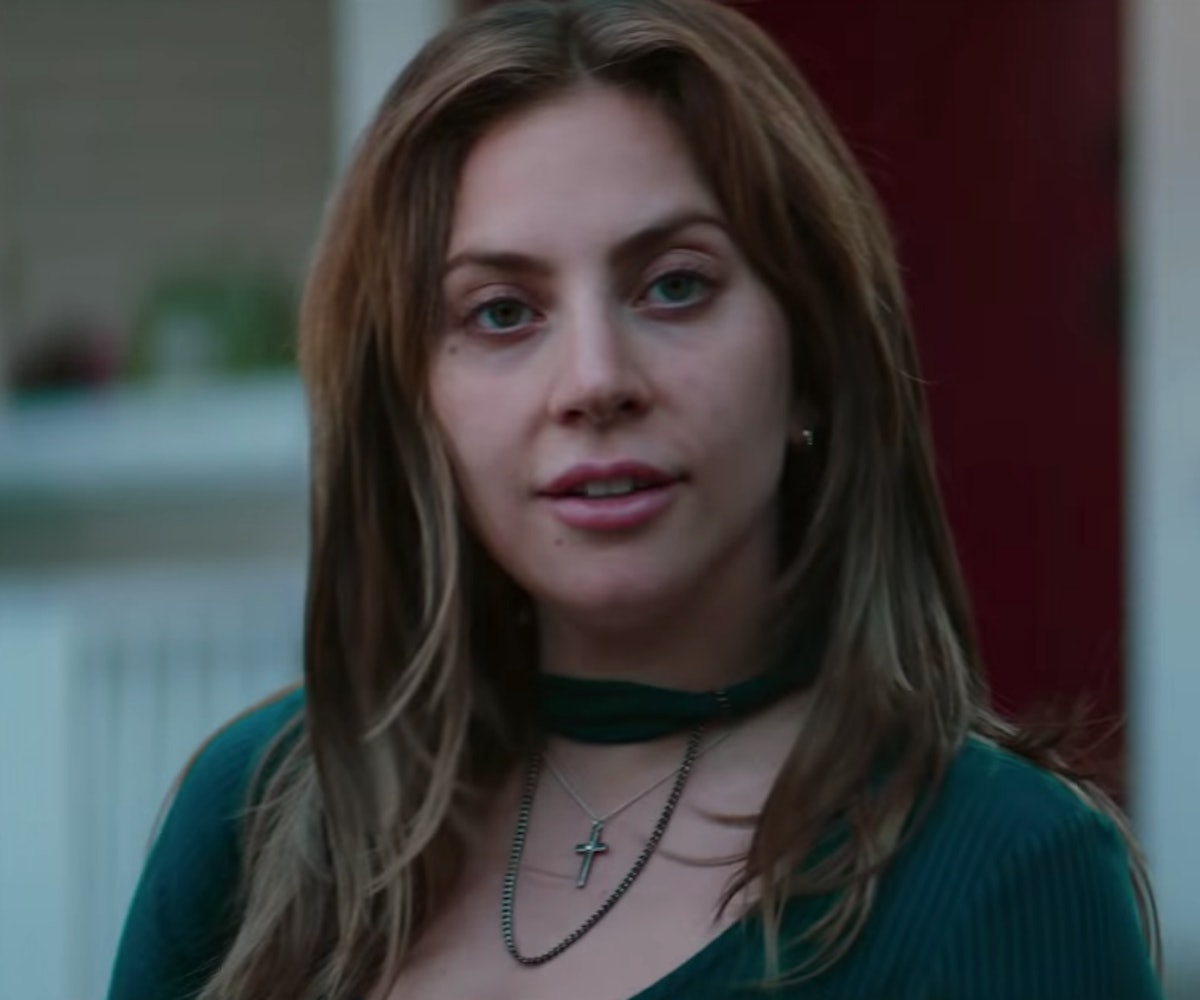 The first time we see Lady Gaga’s Ally in A Star Is Born, she’s storming out of a bathroom stall after breaking up with her boyfriend. Her hair (brown, Gaga's natural color) is up in a bun. Stray strands frame her face. Save for maybe some lip balm, she’s barefaced, and beautiful. This is the real Ally, who punches cops and talks back to her boss.

The next time we see her is when she’s on stage performing at a drag club. Her natural, full eyebrows are covered, and thin iterations are taped on in their place; she wears fake eyelashes, silver eyeshadow, and red lipstick. This will be the last time we see her in a full face of makeup until around the halfway mark of the film when (spoiler) her character is transformed into a pop star and her hair goes from brunette to orange, and brightly colored eyeshadow and lipstick become a part of her regular look. This is the manufactured Ally.

But flashy as that Ally is, it's the first version of Gaga’s character that people are talking about—or at least the origin story of why she has that look. Widely known by now, the story goes that, during a screen test, A Star Is Born director and co-star, Bradley Cooper, wanting to see Gaga “completely open” and sans “artifice,” removed her makeup with a wipe.

It’s pretty much what he wanted for most of the actors on set (excluding the drag queens, understandably so), head makeup artist Ve Neill tells me. “He wanted everybody to be very real,” she says. For Gaga specifically, “He wanted to see her very fresh-faced and just like a regular girl. Didn't want her to be made up all the time.” Gaga’s transformation is also a focus because, well, she doesn’t look like Gaga. Though as a pop star, Gaga is known for doing the most—whether with her makeup, performance, or fashion choices—this film shows her doing the bare minimum. And this makes sense because makeunders are a thing that Hollywood loves—especially during awards season.

“Glamour doesn’t win Oscars,” writer Natalie Finn wrote a couple of years ago in a story for E!, and that’s proven to be true. For example, the Best Actress winners from 2001 to 2004 all involve roles in which the actresses cast in them are “stripped-down.” There’s Halle Berry in Monster’s Ball, Nicole Kidman in The Hours, Hilary Swank in Million Dollar Baby, and, perhaps the most dramatic of all, Charlize Theron in Monster. Jennifer Aniston’s performance in Cake didn’t earn a nomination, though Vanity Fair assumed it would since it had “everything awards-season dreams are made of: critical buzz, playing against type, and a dramatic make-under for one of Hollywood’s most glamorous actresses.”

As Neill points out, a lot of these transformations have to do with the role at hand. Speaking of Theron in Monster, she says, “That’s her going out of her realm as a beautiful woman and doing a type of character. I think [the acclaim] has to do with the content, not especially because they’re made under.” This is true, too. Actors are not winning awards solely because they decided to forego foundation and bronzer, but it does help them get noticed and lauded for their "bravery." It's a statement that they're being serious, and refusing to rely on the dazzle of their looks, and, instead, are using their physical instruments to go to darker, more real places.

Which is perhaps what Cooper was going for with Gaga. "Authentic" is a word that’s been thrown around a lot in the press leading up to A Star Is Born. “Be authentic. Tell the truth.” That was Cooper’s mission for the film, he told the New York Times in a recent bizarre non-profile profile. And Gaga has said that going the “no-makeup makeup” route was empowering. She says that she was afraid to approach the role and that Cooper helped “pull out a vulnerability I might have not been able to pull out myself.” She’s struggled with her self-esteem before, noting to Los Angeles Times, “When my character talks about how ugly she feels—that was real. I’m so insecure. I like to preach, but I don’t always practice what I preach.”

And yet, while makeup and hair dye are undoubtedly artificial, tools that some people rely on maybe too heavily at times, they are still powerful parts of an actor's arsenal, and don't detract from authenticity any more than clothes do. Even if they help construct a persona, there's still the same person there, underneath it all.

During the press tour for A Star Is Born, we’ve seen Gaga embody a very specific, often heavily made-up persona: Movie Star Gaga. Her platinum blonde hair has been styled alternately in updos and loose waves. She’s wearing Oscar-worthy gowns and has flawless makeup at every premiere she’s attended. Maybe this is her way of distancing herself from the Ally we get to know on screen. Perhaps this is just her way of getting back to her own roots as an artist. In a recent interview with the New York Times, Rachel Syme asked Gaga what we can expect next, to which she responded: “Oh, I’m just shape-shifting again.” And we hope she never stops.

A Star Is Born is in theaters now.