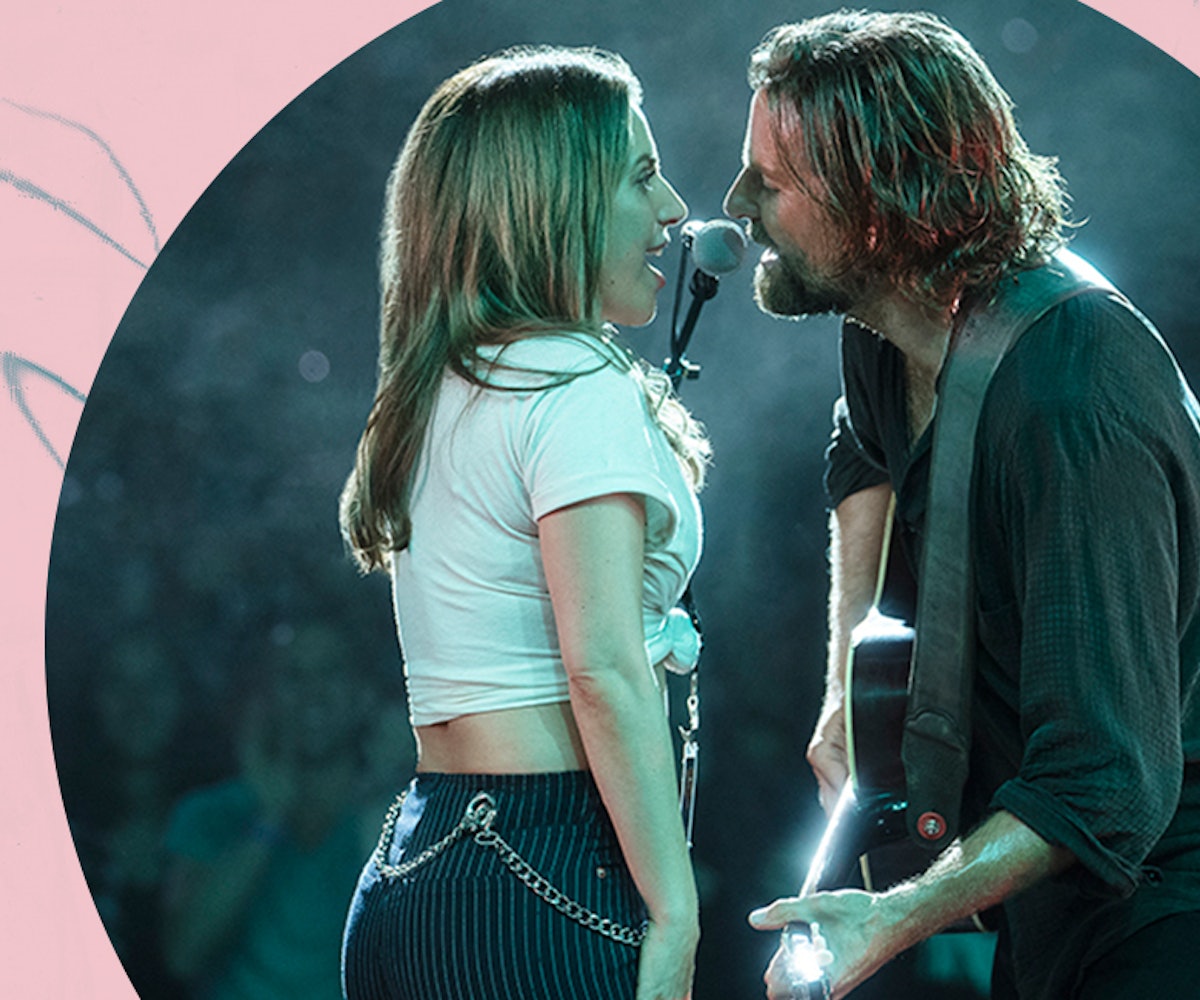 Late in the new movie A Star is Born, a character relays the philosophy that music, consisting of essentially 12 notes, is “the same story told over and over, forever.” The difference, he explains, comes from how musicians interpret those same 12 notes.

This moment is at once deeply sincere and utterly meta, because this is the fourth version of A Star Is Born (fifth if you count At What Price Hollywood?, a 1932 film that shares a lot of story beats with the other four). The first, from 1937, was a Technicolor melodrama starring Janet Gaynor and Fredric March. Next came George Cukor’s 1954 version, with Judy Garland and James Mason, followed by the 1976 version starring Barbra Streisand and Kris Kristofferson. The latest comes from Bradley Cooper, who directs, co-writes, and stars alongside Lady Gaga.

In a lot of ways, Cooper does an admirable job of re-arranging those 12 notes for his 2018 update (based on the timing of the earlier versions, we as a culture were cruelly denied a late-’90s edition of the story). All four movies are visually impressive to some degree; the ’37 has vivid early Technicolor, while Cukor stages some gorgeous tableaux in the ’54. Even the ’76, the worst of the bunch in a walk, was Oscar-nominated for its cinematography, which includes some lovely wide shots and a bit of era-appropriate verisimilitude. Cooper goes in a different direction for the new film, composing heavily in handheld and close-up shots, trying to get up close and personal with his characters’ anxieties.

As always, the story is about a younger female ingenue (Gaga) who is discovered and becomes romantically involved with an older star (Bradley Cooper) whose career is on its downward slope, usually (as is the case here) at least in part because of alcohol abuse. Gradually over the years, this has morphed from a story about actors, in the original; to a story about actors who sometimes sing, as in the 1954 non-integrated musical; and finally, to a story about singers and musicians, as in the 1976 version and the new one, which are probably closer, dramatically speaking, than any other pairing.

It’s a little odd to even slightly pattern the new film off of the least successful previous iteration, but they’re especially close in terms of how the two films process stardom. All four Stars cast a well-known figure in the ingenue role; even Gaynor, whose character seems to be no older than her early 20s, was over 30 when she played young Esther Blodgett, who leaves her family home for the first time to try to make it in Hollywood. Gaynor won an Oscar almost 10 years earlier, and by the time she did A Star Is Born, it was a comeback of sorts, garnering her a second Oscar nomination before her retirement (!) a few years later. Garland was in a similar position when she took her crack at Esther Blodgett, and rather than playing against her age, the Cukor film rolls it into the story. Her Esther is a little further into her career, in that she sings professionally, but as (essentially) a glorified chorus girl; the movie never comes out and says that this might be her last chance at stardom (and Garland was only 32 when she played the part), but there’s definitely a sense that this Esther has reached a plateau before her unexpected ascent. The comeback narratives of their stars give both movies some extra subtext: Here, they seem to be saying, is that star you fell in love with some years ago, and maybe this recreation will remind you of why.

That subtext is weirder and trickier when A Star Is Born gets reconfigured to focus on pop music. Barbra Streisand had been working in television, music, film, and theater for around 15 years when she played her own Esther (now surnamed Hoffman) in the ’76 remake. She had already won multiple Grammys and a Best Actress Oscar, and similarly, Lady Gaga has won several Grammys herself since becoming a major pop star a solid 10 years before assaying her own Esther (tragically rechristened Ally in Cooper’s film). It’s one of the biggest cues Cooper takes from the 1976 film: the idea that a globally famous superstar who hasn’t really receded from the spotlight since becoming famous should nonetheless play a fresh new discovery whose potential no one has yet noticed.

Of course, film history is full of famous actors playing less-famous actors; Emma Stone won her Oscar for playing a struggling actress in La La Land just recently. But part of the delicacy of La La Land is Stone’s believability as someone who is charming, even delightful, but who might not have the goods or the gumption to make it as a superstar. Her much-criticized normal human singing voice lent that conceit some credibility, not to mention crucial vulnerability.

Streisand and Gaga both project vulnerability well enough in their films, though Gaga still feels visibly green as a film performer—strong presence, can hold her own in a close-up, but prone to broad emoting with little going on beneath the surface. Moreover, their movies’ methods of hiding their natural talent as singers—for Streisand, sticking her in an inexplicable R&B lounge act, and for Gaga, giving her gorgeous but “normal” hair and pointing out her slightly Streisand-y nose—aren’t especially well-thought-out, and both vehicles spend a lot of time on their stars acting with vaguely disingenuous surprise that anyone would be interested in little ol’ them. Gaga in particular, even after attracting the attention of Cooper’s dissolute country singer, still seems absolutely flabbergasted when a child tells her that she’s pretty.

In a way, the new Star is Born, like its immediate predecessor, brings the audience in on the simulated discovery process. The filmmakers must know that plenty of viewers will be going into this with an understanding of who Lady Gaga is, which invites them to understand Cooper’s captivation—it’s something Cooper and the audience can share right away. The earlier films trade on some knowledge of their stars, too, but their Old Hollywood classicism doesn’t get quite so intense about it. Cooper’s camera gets right up in Gaga’s face, and she looks lovely, but there’s something insistent about this reintroduction to someone who hasn’t really been gone. We’re invited to imagine a tragic alternate timeline where Gaga gets famous at 32 instead of 22 (sort of; the movie never gives her age but vaguely implies that she’s a little younger than Gaga’s actual years). In that way, the Streisand version, otherwise fairly logy and lacking in scope despite the cinematography, may have been ahead of its time in selling a pop star-creation myth about an established star—like one of today’s decades-later sequels, produced with no time gap.

In ever-accelerated 2018, the movie around its stars feels, as you might expect, a little more raw than its predecessors, and it’s certainly less gauzy and tedious than the 1976 edition. Cooper’s fading male star has more acutely diagnosed personal pain than his earlier equivalents—and he has to, because the dynamic of one star rising while another falls doesn’t make as much sense in today’s music industry (or even strictly in this movie, where Cooper’s Jackson Maine goes from an arena-filling tour to a Grammy telecast demotion in a matter of months). As a director, Cooper’s bag of tricks isn’t exactly filled to bursting, but he cuts his scenes more concisely than any previous version and introduces his characters with naturalistic bits of dialogue. The movie builds to some adroit emotional touches, like the intimacy he finds when Ally first duets with Jackson on a massive stage.

To that end, the film has been accused, not unfairly, of indulging tired credibility clichés, contrasting Jackson Maine’s rootsy, authentic country-rock with Ally’s reinvention as an over-managed dance-pop diva—one not unlike Lady Gaga, but less pseudo-avant-garde. Those hints of condescension to pop are there, but I think it’s more that A Star Is Born appears fairly agnostic about its music in general; it’s not exactly sympathetic to Jackson’s drunken insistence that one of Ally’s singles is empty bullshit, but it also gins up his ambivalence about superstardom in a way that’s not always fully convincing. The movie is ultimately most interested in music as a showcase for Ally/Gaga—a way for her to communicate, as Jackson repeatedly urges her to do. Those songs, strong as some of them are, feel a little like an algorithm-generated Spotify playlist, predicated on the comforting sensation of “discovering” something you already like.

Obviously, plenty of people will see A Star Is Born without sampling the three previous versions, but it nonetheless feels like a movie that Cooper is laboring to artfully repackage, like a biopic based on a single-paragraph press blurb. The movie’s final shot, after a tearjerking snippet of footage, is piercing, and maybe the most distinctive Star Is Born finale so far. Yet there’s something self-regarding about it, too, and about the movie as a whole. Cooper and Gaga have some chops, and A Star Is Born wants to mythologize them as immediately as possible.

Star Is Born is in theaters now.