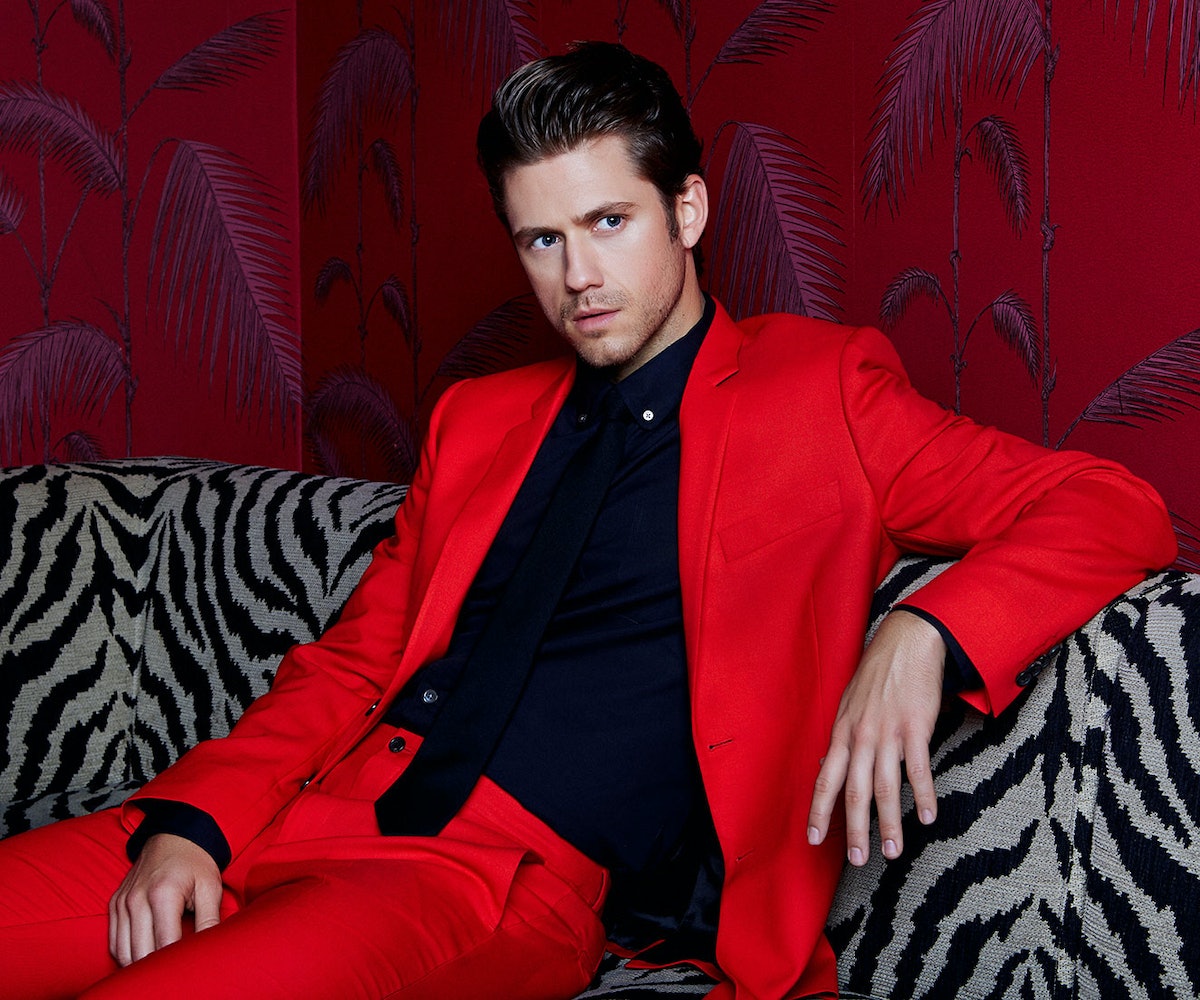 Photographed by Roman Yee; Styled by Sam Spector; Assisted by Esther Pak; Grooming by Jamie Dorman; Suit by Paul Smith; Shirt by David Hart; Tie by The Tie Bar. Special thanks to No. 8 in New York.
fb
tw

For an actor, it's never easy stepping into the shoes of an iconic character, but this Sunday, Aaron Tveit will do just that when he dons the leather jacket to play Danny Zuko in Fox's ambitious live musical, Grease: Live! If anyone can take the mantle from John Travolta, it's Tveit, who spent the early days of his career leading Broadway musicals like Hairspray and Catch Me If You Can, before moving in front of the camera in films like Les Miserables and television shows like Graceland. In that sense, Grease: Live! was made for an actor of Tveit's talents, a live, do-or-die musical in front of the camera. Tveit is joined by a strong cast that includes Julianne Hough as Sandy, Vanessa Hudgens, Keke Palmer, and Carly Rae Jepsen, and to hear him tell it, rehearsing for their performance has felt kind of like, well, high school. We caught up with the actor during a recent lunch break to talk about the rehearsal process, the adrenaline rush of opening night, and his worst experience on stage.

This project is a perfect symbiosis of the two things that you’ve been doing throughout your life, which is musicals on stage and acting in front of the camera. What's that been like?

It’s amazing. It’s a very similar feeling that I had when all the Les Mis stuff came together, because at that time, I had been working on stage and working on television and doing some films and that kind of felt like a perfect storm of all of them combined. When I was starting out in film and television, I wanted to have a lot of the work that I did initially not necessarily have to do with musicals. I didn’t want just to be known as a musical guy. Now returning to it, I want to embrace it, because I haven’t done musicals on stage in New York since 2011, so to kind of be back doing this now, I’m kind of falling in love with it again.

What has the overall vibe been like on set during rehearsals?

Everyone is coming to it with such a place of positivity, and any production you do—9 times out of 10 there’s some kind of negativity. Somebody’s personality may affect the overall morale. But top-to-bottom, this is the hardest working, most positive, excited group of people to be involved with. So because of that, I think that it almost feels like doing a show in high school or something. You just stay after school and do this great thing with your friends, so even though the scope of this thing is so big, for us working on it, it feels really intimate and small.