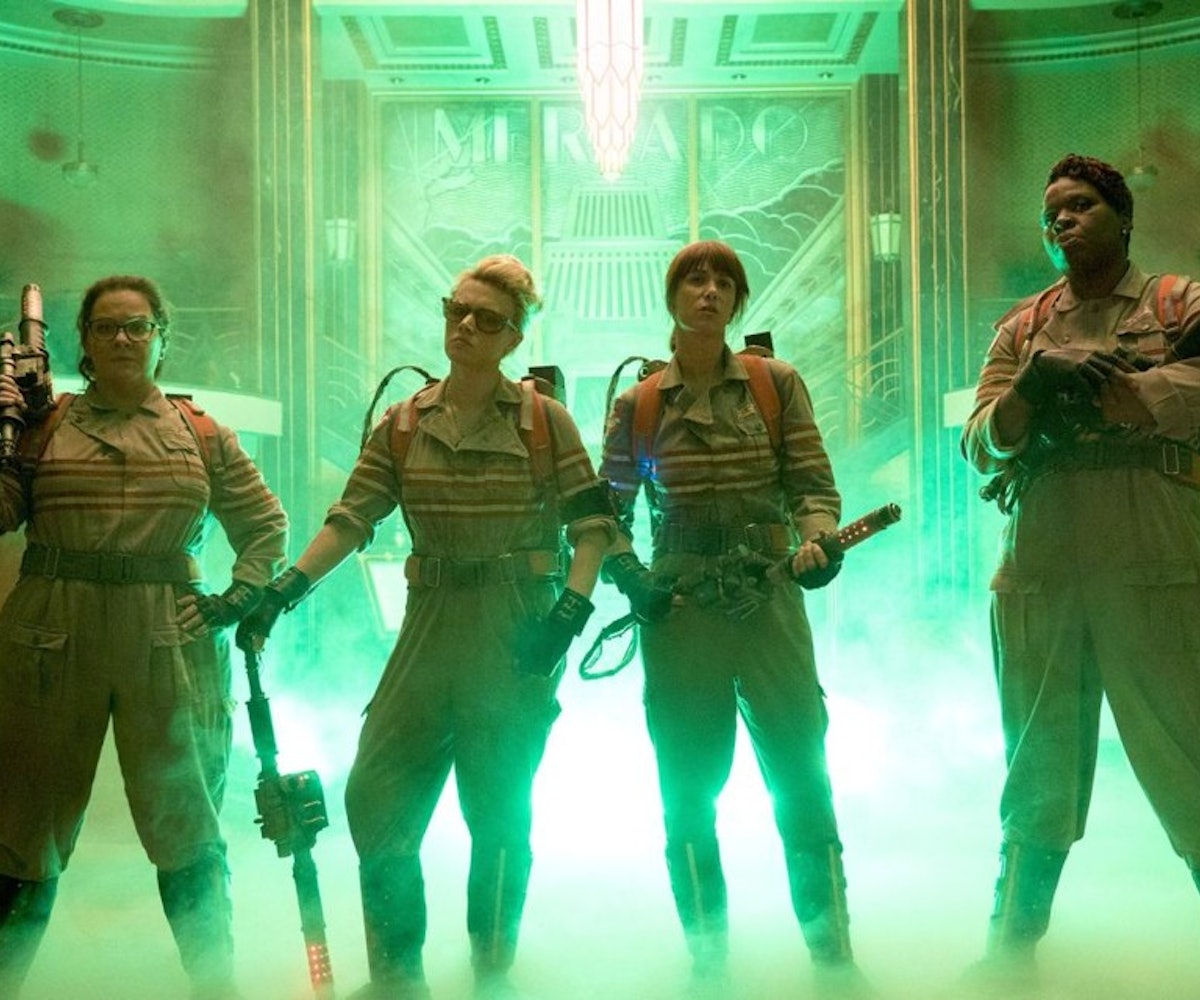 Ever since Ghostbusters II hit theaters in 1989, a third film in the wildly successful franchise has been in the works at Sony. As recently as 2014, the studio was planning on making a film that united the franchise’s original stars with a younger team of men who also bust ghosts. But after the untimely death of Harold Ramis, who starred in the original and was writing the script for part three, the studio began to reevaluate their plans. Then, in August of 2014, The Hollywood Reporter broke the news that Sony was eyeing Paul Feig to direct a new kind of Ghostbusters—one that would focus on an all-female crew of paranormal crusaders.

It’s been nearly two years since that story broke, and Sony’s eagerly anticipated reboot is about to hit theaters with Kristen Wiig, Melissa McCarthy, Kate McKinnon, and Leslie Jones rocking those tan jumpsuits and proton packs. For Sony, the move made a lot of sense. Not only was it a way of justifying a reboot by putting a fresh spin on the original which featured four men in the lead roles, but it also meant that the studio could capitalize on the wave of girl power that’s been sweeping through Hollywood. Thanks to some long-overdue conversations about gender equality in the movie industry—and one very powerfully worded essay by Jennifer Lawrence—the idea that women are just as viable and valuable as movie stars as their male counterparts has begun to take hold in a big way.

Feig himself has had a lot to do with this. Beginning with Bridesmaids, which also made Wiig and McCarthy movie stars, the female-friendly director has had success taking traditionally male-centric genres like the buddy cop movie (The Heat) and the spy caper (Spy) and reimagining them with female leads. Sony's decision to remake Ghostbusters with women, then, felt like a no-brainer and all-around win for everyone involved, especially audiences.

But the film's promotional march hit a shocking (and, sadly, not that shocking) snag when a sinister backlash bubbled over once the movie’s first trailer hit the web. Eventually, that first, rather innocuous trailer became the most “disliked” trailer in YouTube history. On the surface, the outcry went something like this: How dare you remake a beloved classic?! Hollywood (which reboots just about everything these days) has finally gone too far! But the subtext of that vitriol went a little something like this: How dare you remake a classic movie and replace all the original dudes with chicks? Are you fucking insane? Many think pieces were written about the misogyny facing the new Ghostbusters, and while the cast mostly ignored it, Feig was forced to defend his film on several occasions.

Sony chief Tom Rothman didn't care that his movie's all-female cast was pissing people off. He was basking in the free publicity. "It’s the greatest thing that ever happened," he told The Hollywood Reporter about the controversy. "Are you kidding me? We’re in the national debate, thank you. Can we please get some more haters to say stupid things?" One week ahead of its release, and Ghostbusters is tracking to make between $40 and $50 million on its opening weekend, a good-but-not-great number, considering the film cost $154 million dollars to make and market. But if the reviews are glowing and word of mouth strong, then Ghostbusters could become one of the bigger hits in a summer that's been bereft of them.

Amazingly, risk-averse Hollywood hasn't bothered waiting for the Ghostbusters' box-office returns to greenlight another all-female reboot. Last October, news broke that Sandra Bullock would headline a new Ocean's Eleven movie in the George Clooney role from the original. Listed on IMDb as Ocean's Ocho, the movie is also rumored to star Cate Blanchett, Elizabeth Banks, Helena Bonham Carter, and Mindy Kaling (Jennifer Lawrence's name has also been mentioned). Does this mean that female-driven remakes of classic movies are officially a trend in Hollywood? Not yet. For that to happen, Ghostbusters needs to a box office smash. But already, websites have been publishing their own versions of "All-Female Remakes That Need to Happen," and studios are probably taking notice.

Is this a good thing? On the one hand, it's hard to root for a movie industry that recycles old material instead of coming up with fresh and original ideas. But if they're going to keep doing it (and they are), then at least they're switching it up by gender-swapping the leads and, in turn, giving actresses more to do than play the love interest. But we also don't want to live in a world where we even need to draw attention to the cast's gender. We don't refer to the upcoming Magnificent Seven remake as the "all-male Magnificent Seven remake." Besides, calling it the all-female Ghostbusters is not only inaccurate but also a huge disservice to Chris Hemsworth.