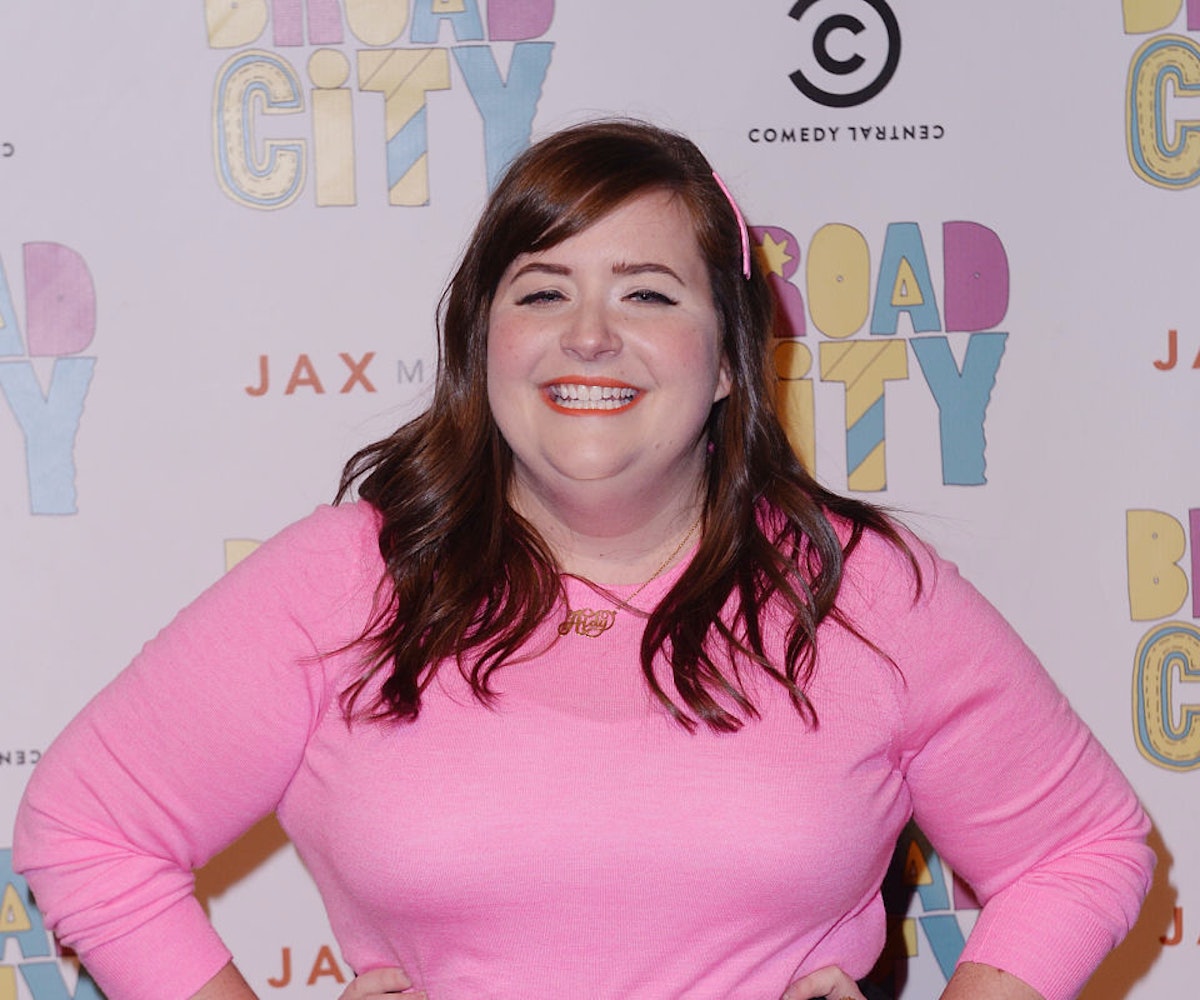 In four short years, Aidy Bryant has emerged as one of Saturday Night Live's MVPs. Like so many SNL alumni before her, the Phoenix native found herself at Studio 8H by way of Chicago's improv institution Second City, where she established herself as a gifted comedian with a knack for creating outsized personalities that burst with brightness. But in Darby Forever, a short film that Bryant wrote, produced, and starred in, she plays someone slightly unfamiliar—a lonely and shy fabric clerk who has wild fantasies about the lives of her customers and her place in them. The movie, which was helmed by SNL's in-house director Oz Rodriguez and co-stars Natasha Lyonne and Retta, is available on Vimeo, and was funded in conjunction with the streaming platform's new initiative to help female filmmakers realize their visions. We recently spoke to Bryant about why making this movie was an overwhelming experience, her life on SNL, and those times Donald Trump and Kanye West showed up at work.

Where did the idea for that film come from?

Well, a lot of things. Probably the main one is [from when] I used to go to this fabric store in Chicago where I would buy fabric for different shows I was doing in Second City, and there was this one woman who would cut the fabric for me, and she would always say, “So, what are you gonna make?” I would say “Oh, you know, it’s for some shows on Second City.” She’d get this little showbiz glimmer in her eye, like, “Oooh!” I just really loved that curiosity.

Did you ever think that you might want to direct the movie, or was that never an option for you?

I wouldn’t say it wasn’t an option, but when I was sitting down, it wasn’t really the thing I was dreaming of doing. I really wanted to perform, and I really wanted to help with the visuals and the art direction and the look of it and the aesthetic, so I mostly got to do that by working with the art department and the costumers and that kind of thing. Producing it, I got to have a role in all of that too, anyway. So, I didn’t want to worry about camera stuff, and I really trust Oz and work with him a lot, so it’s really nice to be able to focus on my performance and the visuals, and just have Oz take that stuff away.

You said that shooting Darby Forever was a really emotional and overwhelming experience. Can you elaborate on why exactly that is?

I collaborated with a lot of different people to make this film, including embroidery artists I met when I was in college. One of my friends, who I’ve known since seventh grade, did all the graphics for the film, and one of the art directors was my roommate in college. And then, you know, I had my friends from SNL who I met, like Natasha Lyonne and Oz, so it really was this scrapbook of my entire life, and favors that I called in to get the film made. It was really an amazing collection of all these great people who I loved and trusted.

How did making this compare to working on SNL?

I think the difference is just the timeline. On SNL, you write something on Tuesday, and you totally produce it and see it through in a matter of three days. Whereas on Darby, I could take my time. I could make things—like choices about costumes and that kind of thing—take meetings, and look for stuff in a way that you don’t have the time to do on SNL. A lot of the time, we’re just racing against the clock at SNL. That part of it made it feel kind of easygoing, in a way. It’s really a different beast.

I see you as someone who actually gets to live out her fantasies, whereas Darby’s just fantasizing. Do you see any of Darby in you, or are you totally different from her in that way?

I definitely think Darby is one little sliver of myself. Certainly she’s a character who flowed from me very easily, and there’s totally a part of myself who doesn’t always want to be the party but wants to be there, and just watch and take it in. I love to observe people and I love to have my own personal time to be quiet and creative, and I think that part of her I totally get. Definitely, I’m more forward and in control of my own destiny than maybe she is, but she’s a character who’s learning how to do that. I definitely learned how to do that, too.

Were you ever shy or have you always been outgoing and extroverted?

I think maybe I was always outgoing, but, maybe, wasn’t comfortable with how to express that, you know? In middle school or high school, it’s not comfortable to be yourself all the time. And now I definitely think I’m more comfortable. I don’t care if anyone thinks I’m weird or silly or goofy. But there was a time when I was younger when that wasn’t such an easy feeling to have. Now, I couldn’t give a shit.

When you were coming up in the Chicago improv scene, what did success look like to you in your head?

To me, honestly, I just wanted to be able to not have a day job. I just wanted to be able to be a performer and not have to work all day at a barbershop, which is what I was doing. To me, that was success. So, when I got hired at Second City, if that was all I ever got to do, I totally would’ve been happy with that. The fact that things moved quickly, or that now I’m allowed to make my own movie or have control over that, and be involved in other projects and SNL? It’s totally more than I could’ve ever dreamed.

Did you ever envision SNL as a realistic possibility?

It’s a mix. I knew Vanessa Bayer, and she got onto SNL. So I definitely had a sense that it wasn’t that far from me when I was performing on Second City—I knew it wasn’t miles and miles away, and that there was a potential for them to see me. But I don’t think I really saw myself being there for sure or anything like that. But I knew it was in my universe.

After you left your audition, did you have a good feeling about it?

Yeah, I kinda did. I was lucky in that when the producers came to see me at Second City, they watched a full, two-hour show that I performed in. So when they called me in for a five-minute audition, I didn’t feel like it was the end-all [and] be-all. They got to see me on my home turf doing a two-hour production. Five minutes just felt like a bonus, it didn’t feel like it all hung on that moment. I think, in some ways, that allowed me to be more comfortable. Post-audition I was like, well, I was myself, I did material that I liked, and if they don’t like it, I know that I did, and that’s okay.

How has your perspective of being on the show changed since your first season?

I think my very first season, I just wanted to figure out where I could fit and work on this already-moving train. SNL is this thing that exists whether I’m there or not, you know? So I wanted to figure out where I could fit in this machine. And once I started to figure that out, and found my place there, that’s when I really started having fun and being able to perform to the best of my abilities. It took me a little bit of time to find my footing there and feel comfortable in this totally new medium to me of live television.

I feel like you’re firing on all cylinders, like an athlete hitting their prime. Does it feel that way for you?

Well, first of all, thank you for describing me like an athlete, because that’s the first time that that’s ever happened to me in my entire life, so what a thrill for me. I definitely feel confident. I know I feel really good about what I’m doing, and I really know my voice, and I’m really thankful for the time that I had in Chicago to get to learn that voice, and now it makes it easier to take these bigger moments under my belt and just do it. I wouldn’t say I’m struggling with insecurity. I would just say I’m trying to do my damn thing.

What is it like when someone like Donald Trump comes in to host. Is that surreal to you?

Of course! It’s not like I see Donald Trump as part of my daily life, so then when you spend a week with him you’re like, “Oh, this person is not just a voice on the news.” But at the same time, I understand that that’s part of what SNL is: engaging with popular culture. You’re going to come across people like that, who maybe I wouldn’t normally be like, “Oh, I want to talk to Donald Trump all day.” But that’s what happens, and it’s really interesting and you learn a lot.

Is it easy to put your personal opinions or perceptions of them aside and just do the work?

Yeah, it really is because, at the end of the day, it’s just people, right? He’s just a person, we’re all just sitting at a table, and we have a job to do.

You had a big role in the recent Beyonce spoof that went viral the next day. When you’re making something like that, do you have a sense that it’s going to become a part of the culture the next day?

I don’t know. More like when we ready it at the table read, I’ll have my own personal sense of, like, yes, this is the right take on this issue. Or I feel like we’re on the right side —yeah, this is insane that people are acting insane that Beyoncé is black, no shit. So those are the moments where I’m like, Yeah, this feels really good or really right. But I wouldn’t say that I know, like, this will be a hot viral hit and I can’t wait for it to star on Huffington Post or something. I don’t really read much online about the show, so I guess if it pops up on Twitter or something, then I see it. We want everything to be good, so we’re just trying.

When Kanye West was on the show, someone you don’t directly work with, do you interact with him at all?

I would say that I’m not, like, knocking on his door to try and meet Kanye West, but we’re all working in the same building on the same floor, so you kind of naturally meet them in a way that doesn’t feel like I’m hunting you down to engage with the cultural figure of our time. It’s more just like, I’m just living. Sometimes you interact, sometimes you don’t. I just try to kind of focus on my job that week.

NEXT UP
Life
NYLON Newsletter: October 4, 2022
Life
Emily Ratajkowski Called Out Marilyn Monroe Biopic 'Blonde' For "Fetishizing Female Pain"
Life
Fever Ray Throws A Spooky & Sexy Office Party In "What They Call Us" Video
Life
Read An Exclusive Excerpt From I’ve Had To Think Up A Way To Survive: On Trauma, Persistence, and Dolly Parton