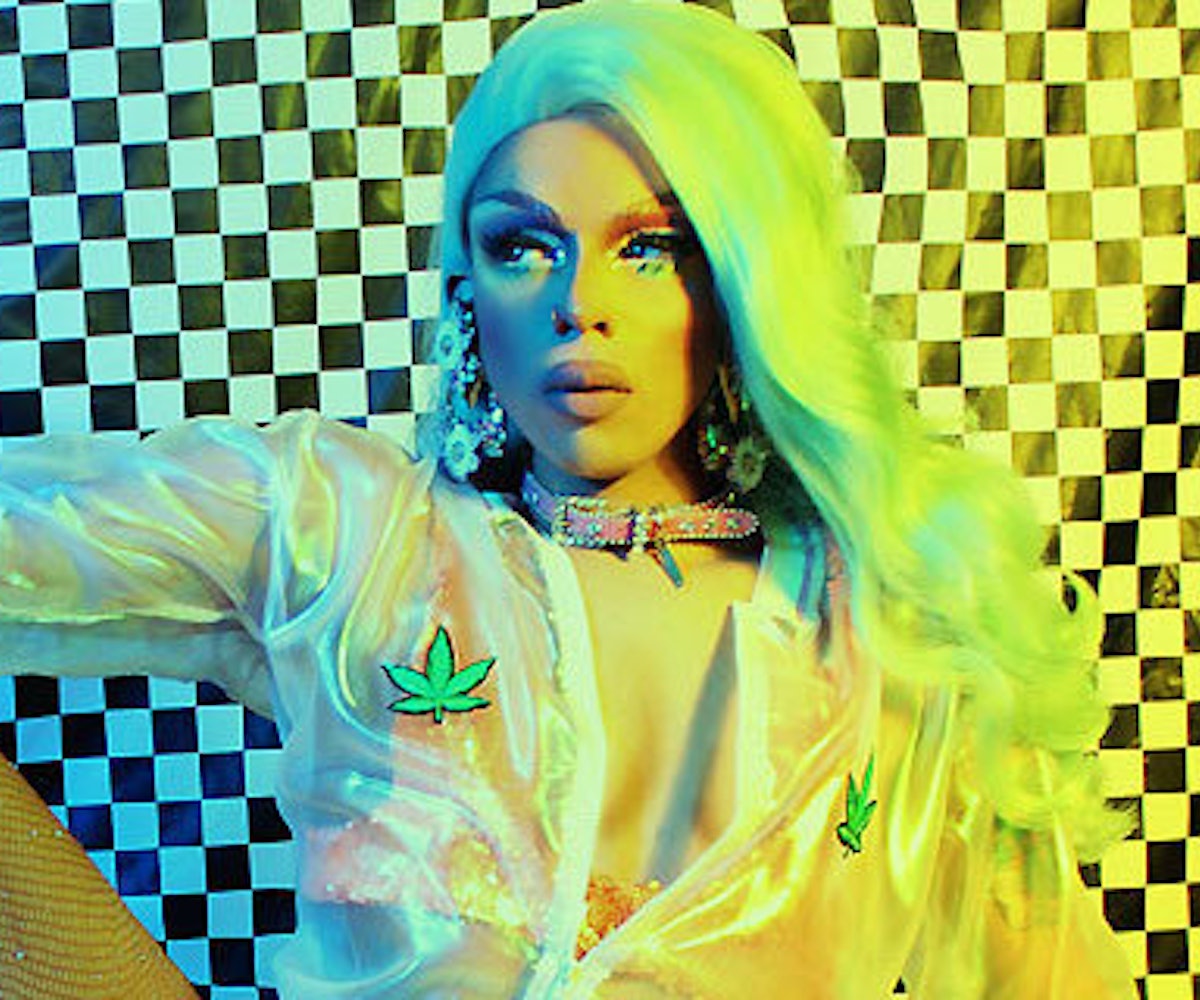 Aja may have catapulted into the public's consciousness as a fan favorite from RuPaul’s Drag Race Season 9 and All-Stars 3, but girl is ready to carve out a path of her own as more than just a glittery face—more specifically, as a multihyphenate creative with a brand-new musical project that’s sure to put her on the radar as a bona fide rapper.

Part Pokemon princess, part politically charged firebrand, Aja is not one to take your shit lying down. From Kanye West's tweets to Nicki Minaj’s cultural appropriation controversy, Aja’s got an opinion—and she ain’t afraid to share it. So ahead of Dragcon and the release of her EP, In My Feelings, we spoke to the inimitable kween about everything from her musical roots to her anime inspirations—not to mention her secret teenage Tumblr that’s apparently a gold mine of early work. Read our Q&A below.

When did you start rapping?

Everyone is so surprised that I rap. I started writing them when I was 15, and I remember telling my friend, “I really want to become a rapper.” And he was like, "Girl, be real, you're never [going to be]." But I used to record, like, all these raps and put them on Tumblr. I have a secret Tumblr, and it’s still out there, but [the songs] were so bad. But around that time I actually had started doing drag, so I kind of just gave up on rapping for a while. I would still always write music and come back to it every now and then—[but mostly so I could be like], “Oh am I doing it better?” But then I got on Drag Race, and I really was doing drag full-time... I didn’t have time. But now that I have this platform, maybe it's time for me to do what I really want to do and see if I can get people’s attention.

Tell me a little bit about the recording process and the influences you drew from back in the day.

[The making of my old stuff] was so mixtape-y, because it was me looking up the instrumentals of the rap songs that I liked online and then downloading and writing raps over them. I remember when the Pink Friday album came out—Nicki Minaj’s first debut album. It was, like, a big thing for, I think, the people in the LGBTQ community because it was the first huge female representation that we had in the recognition in a long time. I really looked up to that feminine energy. I remember I wrote a rap to “Roman's Revenge,” and it was so bad.

Speaking of Nicki, what other rappers did you grow up listening to?

If I'm being real, I grew up listening to a lot of Lil Kim and Trina. Then there was also like Papoose, Jay Z. Papoose is one of my faves. Then we had Eminem's angry ass— he was always rapping about like children, drugs, and suicide, and I was like, “This is a little dark for me.” I've always been more into like bragging rap than the “dear diary, I'm having a long day” kind of rap. But when I was writing In My Feelings, I did find myself having some of those “dear diary” moments. So I was like, “I’m just going to channel what I remember listening to, especially those Eminem tracks.” Not completely angry energy, but open myself up and be more vulnerable.

What are your thoughts on more dark, emo-influenced SoundCloud rap then?

Somebody called me a SoundCloud rapper on Reddit, and I was like, “Nope, baby I'm an established artist. Thank you, but nice try.”

I was really excited about the production on the album—the “Ha” sample interspersed with bits of Latin pop—not to mention hearing you rap in Spanish. It really felt like all these different pieces of you coming together on one track. Tell me a little about the making-of.

I always want something specific to each track’s beats. I want everything to be unique. I can't just be like, "Hey, make me a beat and then I'll rap over them." Like each song has its own process. It's like, now I want to write a song that is going to have a mermaid feel, but like a mermaid at the club. In the '80s. Listening to disco. That sounds insane. But I would give the producers these crazy ideas. Like, I went to several producers, and they would all be looking at me like, "What? What?"

Speaking of which, you’re well known for your love of anime and all things kawaii. How did you get into anime and Japanese pop culture?

I honestly just never had any friends. That was it. When you're the queer and the weird in the hood, you don't fit in. So I had a lot of free time, and I got really invested in watching TV on Saturday nights—[specifically] terribly-dubbed animes on Toonami. Then I got really interested and started watching all my favorite animes in Japanese, and then I started going on the forums. I started getting into sub-genres of anime and I just started watching a bunch of it.

What is your favorite subgenre?

I love horror anime. I love gory, bloody anime. And I love a good psychological thriller anime. It's so critically-acclaimed, but I still love Death Note. It's so good.

What did you think about that adaptation that they did for Netflix?

It's really interesting to me though, because anime is such an interesting influence on rap culture and hip-hop artists. Asian aesthetics and cultural tropes in general, actually. Like, look at Nicki Minaj.

Oh, “Chun Li?” I was like, "Wow, like, she gets it..." Nicki is great at taking those cultural references and really bringing them to life in a non-affixed way.

Really? Because most people were like, "This is offensive."

I find it really strange when it comes to cultural appropriation, especially when it comes from a lot of Eastern countries. They're a very pro-share culture, and there's a lot of Western influences on anime. But there was that big controversy about that girl who wore the qipao to her prom... I commented on that, and I thought it was inappropriate. But I got stormed by Twitter. People who were just like, "It's just a dress." But then I got stormed by Chinese people who were like, "It's my culture, my dress. I think it looks amazing on her. You're just being a bully."

The big thing I feel like all the FOX news articles and stuff are missing, is that the people who are like, "It's my culture, I love that they're appreciating it" are from Asia, and don't really get our uniquely American racial hierarchy. Like all the damage it does to young Asian-Americans who see their heritage become a stereotype and costume. It’s a lot different growing up Asian-American than it is Asian.

I learned that too... I love how it's just always me going on a political tirade everywhere I go. I love political people. Unless you're, like, Kanye West, then you're the wrong kind of political. Like when he said people agreed to slavery? I literally was just like, "Hey, you're canceled." But he has been canceled.

So what do you want to say to all the quote-unquote free thinkers out there?

In My Feelings is available on iTunes on May 11.