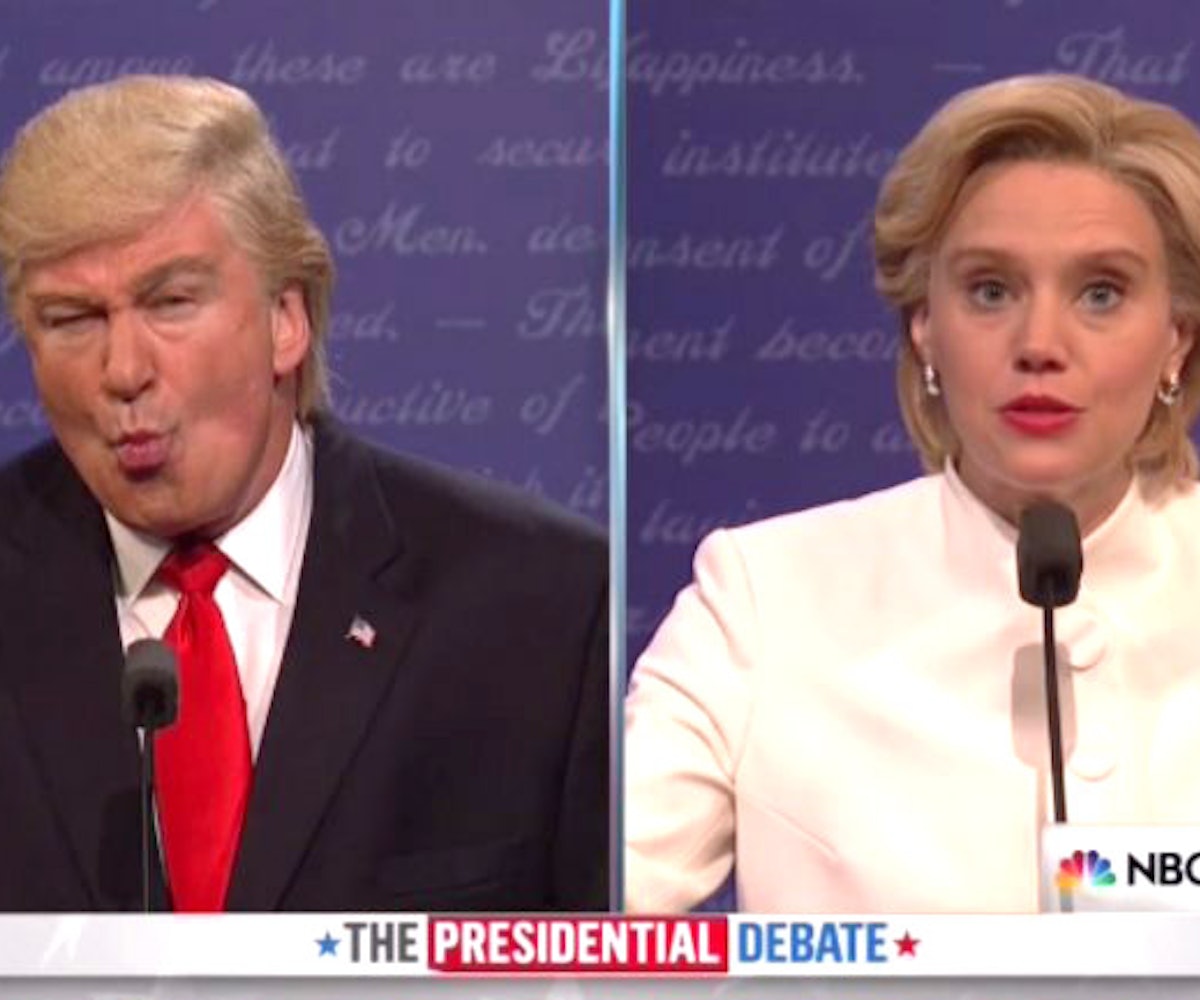 Fortunately for all of us, the presidential debates are over. We no longer have to sit there, death-gripping a glass of wine, nervously awaiting the next ridiculous thing to come out of Donald Trump's mouth. It's painful and mesmerizing; the collective car accident America can't look away from. But the debates are done, and that means a little more peace of mind for all of us.

On the downside, it also means we don't get to watch Kate McKinnon and Alec Baldwin recreate the debates on Saturday Night Live. What's been so unique about this election's debate sketches is that the scripts seem almost verbatim to what was actually said, at least in Trump's case. SNL's version of the third and final debate was no different.

Baldwin's Trump starts out by saying he's going to talk in a very quiet voice, like a little "baby Trump," before shouting at Tom Hanks' Chris Wallace about reproductive rights: "They're ripping babies out of vaginas!" In real life, that isn't that far off from how Trump actually described late-term abortions. In his answer to a question about immigration, Baldwin says, "There are some very bad hombres." Again, an actual quote.

After the two go back and forth about Clinton's emails and Trump's non-plan to defeat ISIS, Hanks' Wallace asks Baldwin's Trump about the 11 women accusing him of sexual assault. "I'm completely innocent," Baldwin says. "I've said this before and I'll say it again, nobody has more respect for women than I do." That's when they show a clip of the entire world laughing in Trump's face.

While there's no proof everyone on the entire planet laughed after Trump said that, the audience at the actual debate definitely did. And if you are a woman who's listened to or watched anything Trump has said and done over the past 40 years, you probably did, too.

The two later re-enacted the now infamous "nasty woman" moment, when Trump snapped at Clinton after she called him out for not paying taxes. Hanks' Wallace says how "incredibly rude" it was, while the actual Wallace did not, and McKinnon hawks a "Nasty Woman" mug, making fun of that fact that the phrase has already been heavily merchandised. Baldwin finishes off the debate by self-declaring himself the winner, according to any poll taken outside of a Cracker Barrel. Watch the full sketch below.

NEXT UP
Culture
Grey’s Anatomy Star Adelaide Kane Brings Clarity To Celebrity
Culture
Simona Tabasco Is the Lifeblood of The White Lotus
NYLON Nineteen
Kosar Ali Is A Met Gala Aficionado
Culture
Not One, But Two BTS Documentaries Are Coming