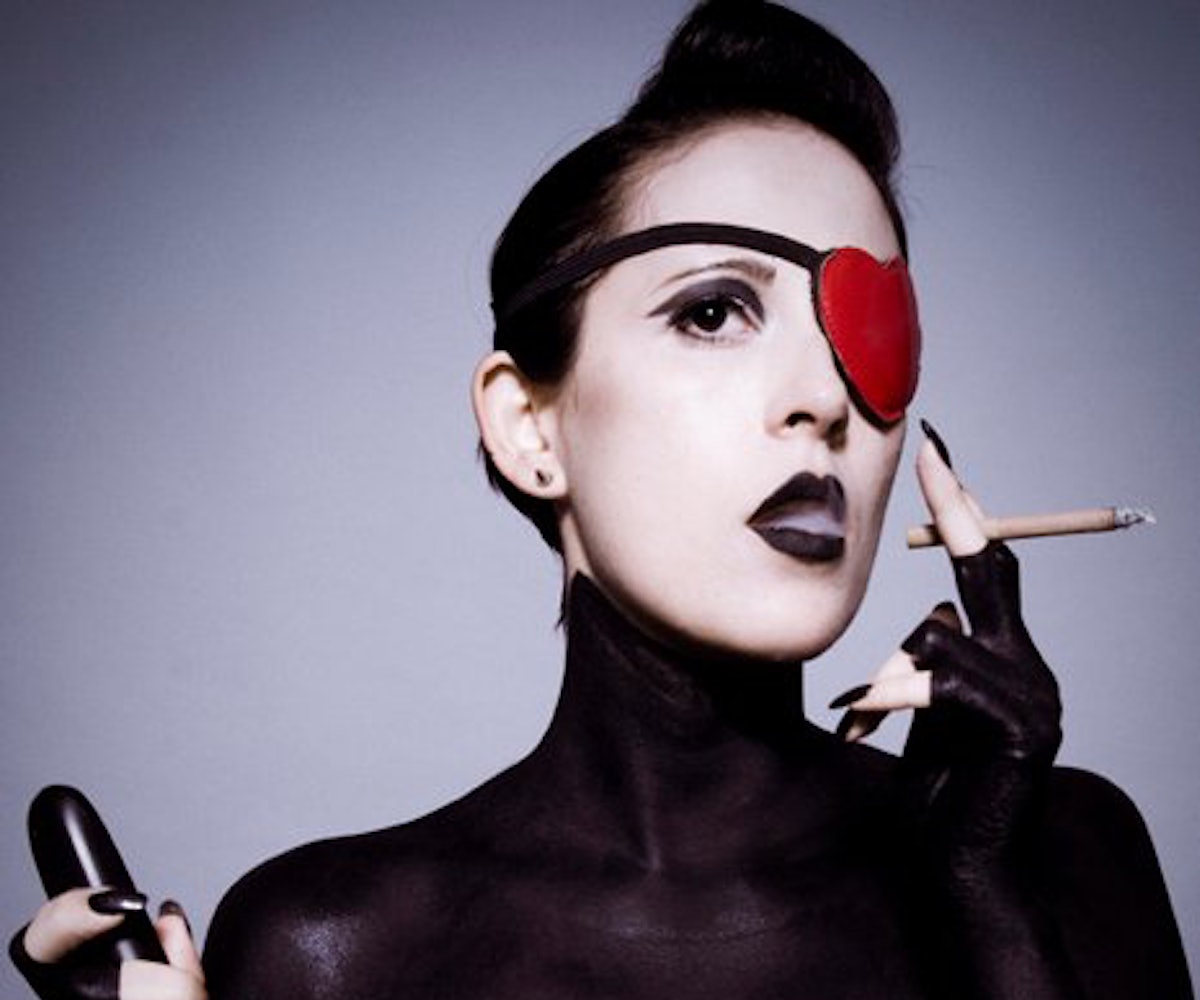 Self portrait courtesy of Alejandra Guerrero

Born in Colombia but based in Chicago, fetish photographer Alejandra Guerrero has made a career out of documenting what is sometimes considered taboo. Her pictures are hyper-stylized glimpses into fictionalized worlds through the lenses of erotica, fashion, and her identity as a woman. Not only has she photographed alt-models like Ulorin Vex and Masuimi Max, she takes pictures of herself, and often. "The best lesson I learned from a teacher in photo school," she says, "is that you are your own best model, because you are always available." Over the years, her voyeuristic photos have melded kink with high fashion in visuals that celebrate sexuality, vulnerability, and the female gaze. Now, she's collaborated with e-tailer Threadless to bring some of her most iconic pictures to everyday wear. Below, we debut her line and talk about mainstreaming kink, being your own model, and, naturally, killer heels.

Why did you decide to do a T-shirt line with your photography?

Well, I love fashion as you know very well, and although I shoot a lot of erotica and fetish I enjoy the photos to have a high sense of style—you'll never see a woman in my work fully nude, she'll at least have an amazing pair of heels. The fashion aspect in my work is key as it's distinctive of my style. Last year I got contacted by Threadless about doing an artist shop through them, which interestingly enough was an idea I had for a while, putting my art into a wearable form; but the logistics of production and shipping seemed a bit too much for me to deal with. So, this way worked out great! I wanted to make a cohesive collection that went with my visual brand.

How did you select which photos to use?

I wanted a variety of my work that all looked good against each other. I included some shots from my Polaroids as I love analog photography and it has a more voyeur/retro look, contrasting with more clean images with no background that could easily get cut out. Those were more about the characters in them.

You use the word "character" a lot when describing your work. Do you develop backstories before shooting?

Usually I have something very clear in mind that I want to do and since I'm all about vamps, those are the type of people I seek out for in my work... femme fatales, not the girls next door, you know? Many times, of course, it's what the model brings to the table, but I do like having backstories to what I represent and having concrete ideas of vignettes in what I portray. Stories are important in photos even if they aren't straightforward. When you see a model dressed a certain way, the expression... I like the idea of making people think 'Who is she and what is she up to?'

Why do you like the femme fatale trope so much versus the girl next door?

It's representative of myself. It's mysterious and seductive, yet dangerous... I mean I could've gone and made a career of shooting pretty portraits but instead I made a career mostly off shooting stuff a lot of people feel uncomfortable with, such as erotica and fetish... I've never been much a of person with interest in the common; I like subcultures.

You've also described your work as feminist, can you talk a little about that?

In my line of work a lot of the stuff you see out there is very misogynist—women are more of a sex object, there's nothing more to them. I think through my work I portray women empowered through their sexuality, looking beautiful, sexy, confident, styled well, tastefully shot, in situations that do not degrade them.

What about those who say you use beautiful models that conform to a traditional sense of what caters to the male gaze?

Beauty is in the eye of the beholder! I've worked with many different types of models, some are liked more than others and sometimes I've had some my male friends say they weren't crazy about a certain model I shot, but I always say, well I like them and they are a great subject. But, I have a different interest in the people I shoot from my artistic eye's perspective.

How do you think your perspective as a woman comes through in your art?

Interesting question! It's clear I'm quite the aesthete, with a love for fashion, seduction, and I certainly like to provoke! A lot of models express liking working with a female photographer as it's been said to me many times... maybe because we get each other in how we like being portrayed and understand things that guys don't care about in details of the photo like if your face looked bad, the pose was weird, or something didn't look good on you? Maybe that ease comes through in photos. Also our sensitivities are different, men and women perceive portraits differently—for example, I read this study that when presented with an image of a figure, females most often looked at the face, while males focused both on the face and the crotch, so there you go! I had bad experiences modeling... I don't think anyone can say the same modeling for me. There is no creep factor here.

What is it about subcultures that interests you so much?

I think because I was raised in a very traditional and more conservative society, the underground seemed very interesting. It was where people expressed themselves more freely and didn't feel repressed by taboos or pointing fingers.

And what does your family think of what you do now?

My family is very supportive of what I do, actually. They were maybe a bit shocked at first, as you know it's is not a very common profession and other people raise their eyebrows, but then they understood. They see that what I do is artistic and they are proud of everything I've achieved with my work.

Earlier you mentioned your work enters spaces that people find uncomfortable. What do you hope people who feel that walk away with after viewing your art?

Either that it opens their minds to being more accepting or it at least arouses an untouched part of themselves.

How has being your own subject changed how you view yourself over the years?

Well it certainly gave me a lot of confidence, which I didn't have so much growing up. But also, when you document yourself over a long period, you see the passing of time, how things in your life change, the natural physical changes, but mostly mentally, and it's interesting seeing this progression. I was a bit more low-key when I started doing self portraits, before the whole selfies thing everyone does now kind of exploded. I think because of that I have evolved the vision of how I like to portray myself in a more crafted and thoughtful way versus a fleeting moment.

How do you feel about the mainstreaming of fetish culture?

I feel there are two sides about the mainstreaming of fetish culture; on one side there's a more positive reception by being less underground and viewed in a less taboo way. I like the idea of people being more open and into trying new things by being less judgmental. But then with that it also becomes more bastardized and trendy to the point where it turns ridiculous and it loses its seriousness and meaning. It develops into something kitschy, as with anything which first came from the underground. Its appeal was how hidden and dangerously thrilling it was. Then you end up seeing movies such as

What are your thoughts on the growing acceptance with a spectrum of sexual identities?

I'm very happy with how much advancement has been made in the approval of different forms of sexuality. It seems like a lot of people are more open-minded about this, than for example, back in the '90s when I was a teenager. Younger generations increasingly question conventional gender stereotypes, and this is probably going to create a fascinating shift in our culture. When changes like this happen they're also reflected creatively as interesting things come out when people explore their identities by questioning them. Also the more accepting our culture becomes, the less struggle people who identify differently face in being themselves and ultimately this leads to happier people who aren't repressed.

The Villain, available at Threadless.

Obey Your Mistress, available at Threadless.

Leave Me in Suspense, available at Threadless.

The Chauffeur, available at Threadless.

The Phantom, available at Threadless.

The Vamps, available at Threadless.