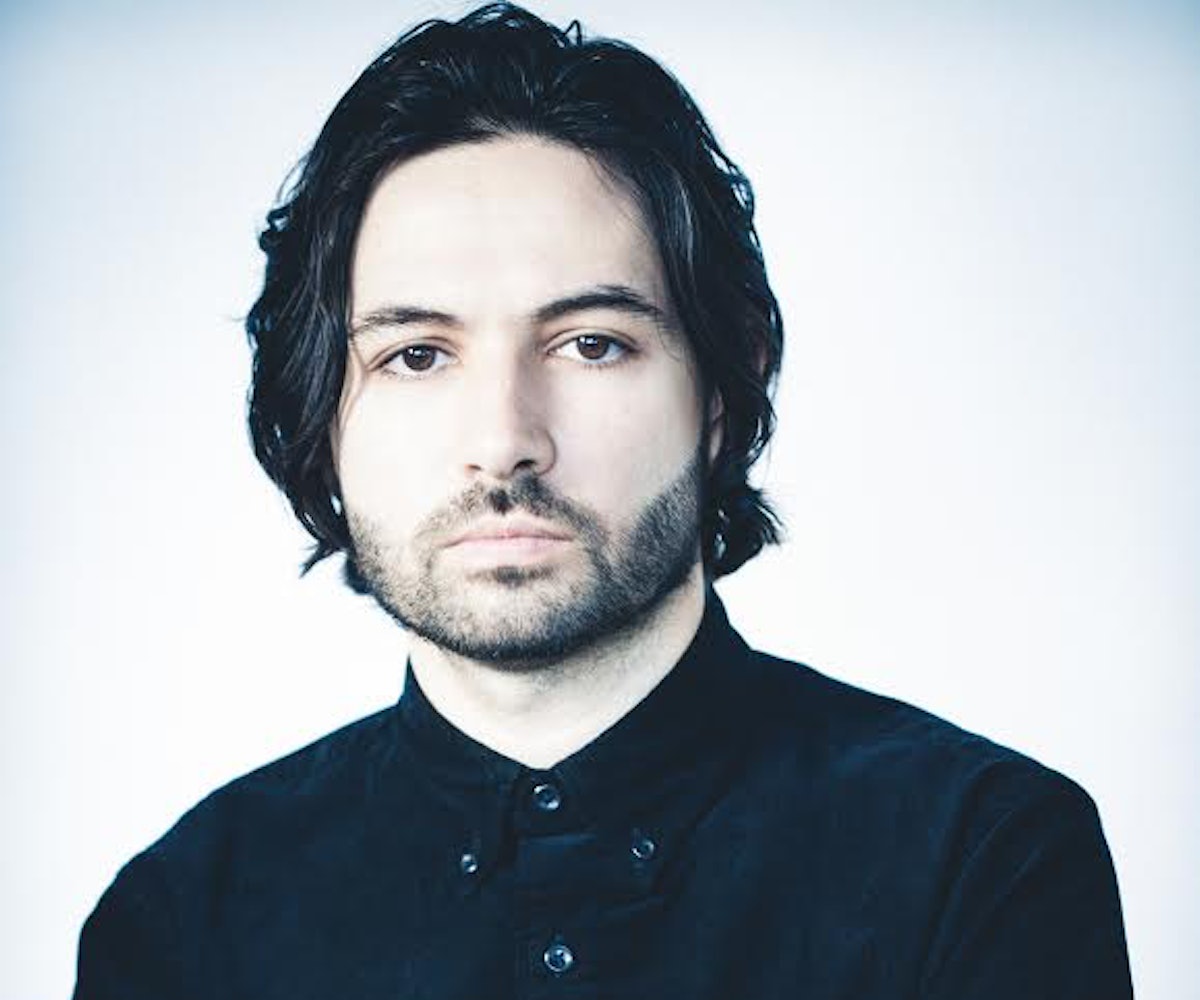 The first time I heard poet Alex Dimitrov read, it was 2014, and he was at a beach in Venice, California. Instead of gathering in a bookstore or on a beer-stained stage, he read at the end of a pier overlooking the Pacific, the distant lights of a Ferris wheel whipping the air neon pink. Dimitrov arrived dressed all in black down to his midnight sunglasses; we were both somewhat out of place—New Yorkers in California. He read bicoastal poems off of his phone about the internet, isolation, and love. They resonated with a ping. I wanted to thank him, but after the reading, he was swarmed by students, scholars, and surfers. I walked off alone.

I followed him, as one does with poets they admire now, on Instagram and Facebook. When I heard his second collection, Together and by Ourselves, covered ground from L.A. to NY, escapism to connection, I knew I had to read it.

The book speaks to the existential—fear, loneliness, mortality, identity in the age of social media—while side-eyeing pop culture—Elvis, The Doors, Lauren Bacall, Nirvana. The poems stand beautifully alone—and in fact, many singular lines made me put the book down and stare into the air for a moment—but they are also interconnected and layered, talking to each other. They often show up in pairings: “Cocaine” and “Champagne,” “Together Alone” and “Alone Together,” “American Money” and “American Nothing.” Dimitrov’s poems are fun to read but also deeply heartfelt. I wondered how they began.

“It’s almost impossible to describe how a poem happens,” Dimitrov tells me when I reach out to him. “It announces itself with a kind of irritation or longing—like something isn’t right.”

In between the love lost, pills, America, West Side Highway, there are these unifying, beautiful glimpses of the sea. I thought of that Pacific rolling away and toward the pier that day of the reading.  I felt there was something important in the water.

“I’m so glad you saw the sea and the ocean in this book,” Dimitrov says. “The element of my first book was fire, and the element for this book is definitely water. I don’t know what to say other than that I’m like everyone else, standing in front of the ocean, unable to see where it ends, unable to know what it is or why it is here, and still madly in love with it. I feel this way about the world, about the self, about other people, too.”

Apart from these moments of seagull and shore, the collection is wholly concrete-paved, walking the rhythmic streets of Manhattan where “love disappeared like money,” or cruising L.A. where Jesus is “driving a white BMW, and he is alone.” We stand in mall parking lots, other people’s apartments, and where the California “freeway thins and wears white like a patient tonight.” Like moving through a large city, reading this collection feels like a multitude of elements hitting you at once. You wonder if they conflict in cacophony or merge perfectly together.

“I love mixing high and low culture, and I almost bristle at those very terms, because my imagination finds all culture interesting,” he says. “Celebrity in America is something we use to medicate ourselves. And it’s bad for the celebrity, and it’s bad for us. We’re so obsessed with the notion of celebrity that we elected one to run our country,” he adds. “To me, this obsession reveals many things about us, some of which have to do with class, escapism, alienation, and existential dread. The interesting and worthwhile way for me to think through those things is through poetry, and I approach many of these subjects in this book.”

Dimitrov is, himself, writing as a first-generation American, an immigrant born in Bulgaria, raised in Detroit, living in NYC. (He is, along with Dorothea Lasky, also behind the ultra-popular Astro Poets Twitter account.) In “American Nothing,” he writes: “Tonight the wind tears through the flag/ Building a religion from cruelty.” I wonder what it’s like now, writing in this current political climate. Of that, he says:

This administration is perhaps the most racist, xenophobic, and culturally divisive one that I’ve seen since I was first able to vote. To be going from the best president of this country’s history to perhaps the most damaging is depressing, to say the least. My job, as a poet, is to wake people up to themselves and to the people around them. To be conscious, to really show up to life, to communicate with and value people and to see them—to really see people for what they are. Much of my new book is about the disconnect from the self and also from each other. That’s contemporary life in late capitalism. We barely even talk to one another. We all have brands or these ideas of ourselves, which are also filtered through other people’s ideas of us. In short, social media. It’s not surprising we’re all so afraid of each other. It’s like we’ve forgotten who we are, so how do we even go about introducing ourselves?

I admit to Dimitrov that social media helped me stay connected to his work. And that I sometimes wish poets I love—that have long since died—had social media accounts. Someone like Whitman or Kunitz could have sent us little poems regularly, observations from their private worlds.

“Of course I’d love to see Emily Dickinson or Arthur Rimbaud’s Insta feeds because they are such a mystery. When you’re a mystery, the greatest fear and the greatest pleasure is being seen... and also not being seen. I’d also love to see Frank O’Hara’s because he’s someone who seemed to love being alive.”

For all the fear and death and sadness in the book, an intense passion for being alive runs under it all, like the electrified third rail in the subway. In the acknowledgments, Dimitrov says that writing the poems themselves was a rescue.

“Poetry saved my life and gave my life purpose and meaning, as unstable and unbelievable as those terms are. This book moves through intense isolation, personally, and American life at large. I think poetry can really help people in a way other things can’t. Poetry returns us to the inner life. It returns us to ourselves.”

At the end, beyond all the screen grabs, glittery highs, bicoastal searching, and likes, maybe that’s what we want most. To be vulnerable, real, returned to ourselves. As Dimitrov writes: “I took off my clothes and I was a person.”