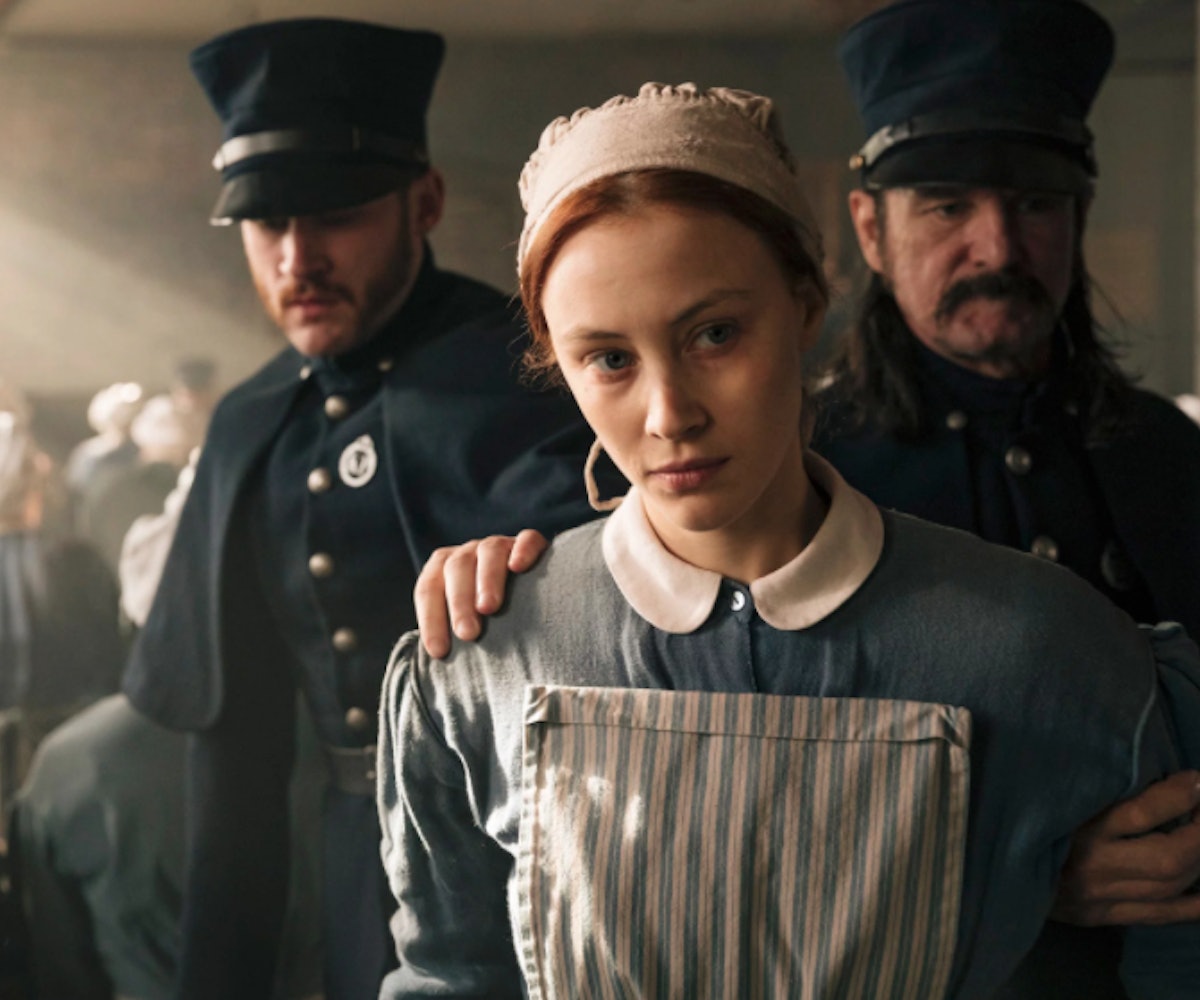 Photo by Jan Thijs for Netflix

Spoilers for Alias Grace ahead.

The story of Scheherazade is one that captivated me as a child, one that I've been thinking about more and more as an adult. As the legend goes, a Persian king found out his wife had been unfaithful to him. In the manner of so many men before and after him, he determined that his personal pain was reason enough to inflict pain upon all women, everywhere. And so: The king decided that he would wed a virgin every night and behead her the next morning after she had served her purpose. The king did this for 1,000 days; he murdered 1,000 women.

On night 1,001, the king met Scheherazade, who had volunteered for this role and prepared for her night with the king by poring over history books and legendary tales. She also made a plan with her sister, Dunyazad: On the eve of her marriage, Scheherazade asked the king to bid a final farewell to Dunyazad, who then asked if she might hear her sister tell her one final story. The king listened as Scheherazade wove her intricate tale, only to stop in the middle of the story—dawn had begun to break, and her fateful appointment with the executioner loomed.

We all know what happens next, right? The king was so entranced that he allowed Scheherazade to live for one more day. But the following night, the process was repeated, and so, again, the king spared her life. This continued for 1,000 nights and 1,000 stories—one for each woman the king had already killed. But after 1,001 nights, Scheherazade told the king she had no more stories to tell, she was ready to meet her ultimate fate.

In Netflix's Alias Grace, the brilliant Sarah Polley-written and Mary Harron-directed adaptation of Margaret Atwood's novel of the same name, humble housemaid Grace Marks (perfectly played by Sarah Gadon) is, likewise, in a position where she must tell stories in order to save her life.

Grace was just 16 when she was convicted, along with stablehand James McDermott (Kerr Logan), of murdering their wealthy employer, Thomas Kinnear (Paul Gross) and his mistress and housekeeper, Nancy Montgomery (Anna Paquin). However, while McDermott hanged for his crime, Grace's death sentence was commuted, and she is committed first to an asylum, and then to a prison, where she languishes for years, leaving only to work as a housekeeper at the governor's mansion—a position she gets because the spectacle of this "celebrated murderess" is an enticing one for the high society ladies of mid-19th century Ontario, Canada.

This might have been the end of Grace's story; she might have spent the rest of her days moving between prison and menial household duties. But instead, a minister (David Cronenberg) takes an interest in her case and seeks to petition for her early release from prison. He calls upon Dr. Simon Jordan (Edward Holcroft), an American alienist, to come talk to Grace and see what he can recover about her involvement in this murder, in the hopes that, through her own storytelling, Grace will be absolved for her role in the crime.

And so begins Grace's time as an Irish Scheherazade. Over the course of Alias Grace's six-episode run, the good doctor (or, really, "good" doctor) plays the role of king, as he hangs on Grace's every word, alternately attracted and repelled by not only her story, but also by Grace herself. It's easy enough to see why he would be. Grace is not only a beautiful woman, but she is also a vulnerable one. Her fate rests entirely in the hands of the man in front of her, and there is nothing more seductive to most men than the awareness that they are in a position of power, that it is in their hands, and theirs alone, to be a hero—or, at least, to decide what comes next.

By the time she meets Dr. Jordan, Grace is no stranger to the power men wield over women. As she tells the doctor about her life, it becomes more and more clear that Grace has always been at the mercy of the men around her, as well as, occasionally, at the mercy of those women who acted as proxies for male power, women who thought they'd reap advantages by siding with their oppressors. As a child, Grace was physically abused and sexually propositioned by her father; as a teenager, she had to ward off sexual advances from men ranging from strangers to fellow workers and employers; she also saw her best friend fall prey to a callous, lying man; after being sent to an asylum, she was raped by the men who were ostensibly there to help her. So yes, by the time she meets Dr. Jordan, Grace knows about the power of men. More than that, though, Grace has grown to know how reliant their power is on one thing in particular: women's silence. And so Grace chooses not to be silent anymore.

In talking to Dr. Jordan about her crimes, Grace is getting her first opportunity to be the one in control of her own narrative. Even when she testified at her trial in her own defense, she was parroting the words of her attorney, a man who later tells Dr. Jordan that he is 100 percent certain that Grace is guilty. But Grace knows how a woman's silence allows men to get away with horrific crimes; it is through women's silence that men retain influence; it is through women's silence that they feel comfortable committing any atrocity they dream up. These men know that women can't so much as scream for help, lest they be judged guilty of the crimes committed against them.

And what, then, is guilt, when a woman has spent her whole life at the whims of those in power? This question is just as important as the one that hovers over the whole series, the question of Grace's guilt in the murders. Save for the smug defense attorney, there doesn't seem to be a single person who knows for sure whether or not and to what degree Grace is guilty of murder—including Grace, herself. Is she guilty if she stands silently by while a man is shot upon entering his home? Is she guilty if she wrings the neck of a person who abused and belittled her? Is she guilty if she did those things but has no memory of them? Is it possible she is guilty and not guilty all at once? Is it possible none of this matters and that guilt cannot be assigned to an oppressed person when she revolts against her oppressors?

Alias Grace is, at its heart, about answering these questions. Or, rather, it is about our inability to answer them with any real success. Much like Dr. Jordan, the audience finds itself entranced by Grace's story, one deliberately strewn with falsehoods that the viewer is privy to, even if Dr. Jordan is not. It becomes clear that Grace tells these lies to protect herself, and it becomes clear that she has every right to do so. Because Dr. Jordan's interest is not merely in the truth—as if there were even one truth at all, ever. Rather Dr. Jordan's interest is often prurient, he loves hearing the lurid parts of Grace's story; he is seduced by the idea that he alone can save this beautiful, intelligent woman, this diamond in the rough, as if her appeal were in any way separate from either her sins or those visited upon her.

In fact, though, it is this combination, this duality of dark and light all contained in one being, that is what is so seductive to Dr. Jordan—and to the audience. Much like the way the gorgeous quilts and embroidery that Grace is constantly working on as she sits and talks to Dr. Jordan would not be possible without demanding a heavy price from their maker (Harron's camera goes back, again and again, to Grace's raw, bloodied hands, which never stop moving as she sews and sews), Grace's story would not be possible were it not for the heavy price it exacted from its maker.

Grace's story exists as a story rather than simply a life because she is bound by a tradition that exists to this day and that existed in the time of Scheherazade, one which demands that women prove their worth to men, over and over and over again. Much like the king allowed Scheherazade to keep on with her storytelling ruse for 1,000 nights, Dr. Jordan prolongs his time with Grace until something happens and it is revealed to him that, no matter how deeply he thought he knew Grace, he would never understand who she really was. And so he abandons her, sending her back to a life of imprisonment. Grace fell victim to that fatal flaw of being a woman: She talked too much. She said things men didn't want to hear.

When Scheherazade told the king she was done telling stories, he realized he had fallen in love with her and decided to marry her. More than just falling in love with her, the king has grown wise from her stories and matures into a beneficent ruler, one who no longer hates women. The moral, then, seems to be that it is the burden of a woman to save her own life, and those of all other women, by playing a game whose rules she had no part in writing.

Grace's story didn't end so simply. Dr. Jordan was incapable of reconciling the darkness he saw in Grace with the purity of the vision he needed to maintain in order to be attracted to her. So he left her.

But Grace's story continued. She was released from prison after 30 years, and she married the now-grown farm boy she'd once known; a boy whose childish affection for Grace was twisted into hatred when he thought she'd run off with McDermott. It was this boy's testimony which sealed Grace's guilty verdict in court, and sent her to prison. But Grace marries him anyway. And the man that the boy has become has only one request from Grace: He asks her to tell him stories. Night after night, Grace tells him the stories of the degradations she faced in prison and in the asylum, horrible experiences for which the man claims responsibility, horrible experiences of which the man wants to hear about, over and over.

Will this man grow to be like the king, and learn from what Grace is telling him, learn that the burden women pay simply for being women is often too heavy to bear? I doubt it. Alias Grace is not a fairy tale, after all. Or at least not one with a happy ending—whatever that means. It is instead a powerful recounting of the importance of women's stories, the ways in which we tell them as a means to steer ourselves around the minefields of this world, and how the way we choose to tell these stories is sometimes of vital importance, is sometimes a matter of life or death. Now, if only men would start to listen.