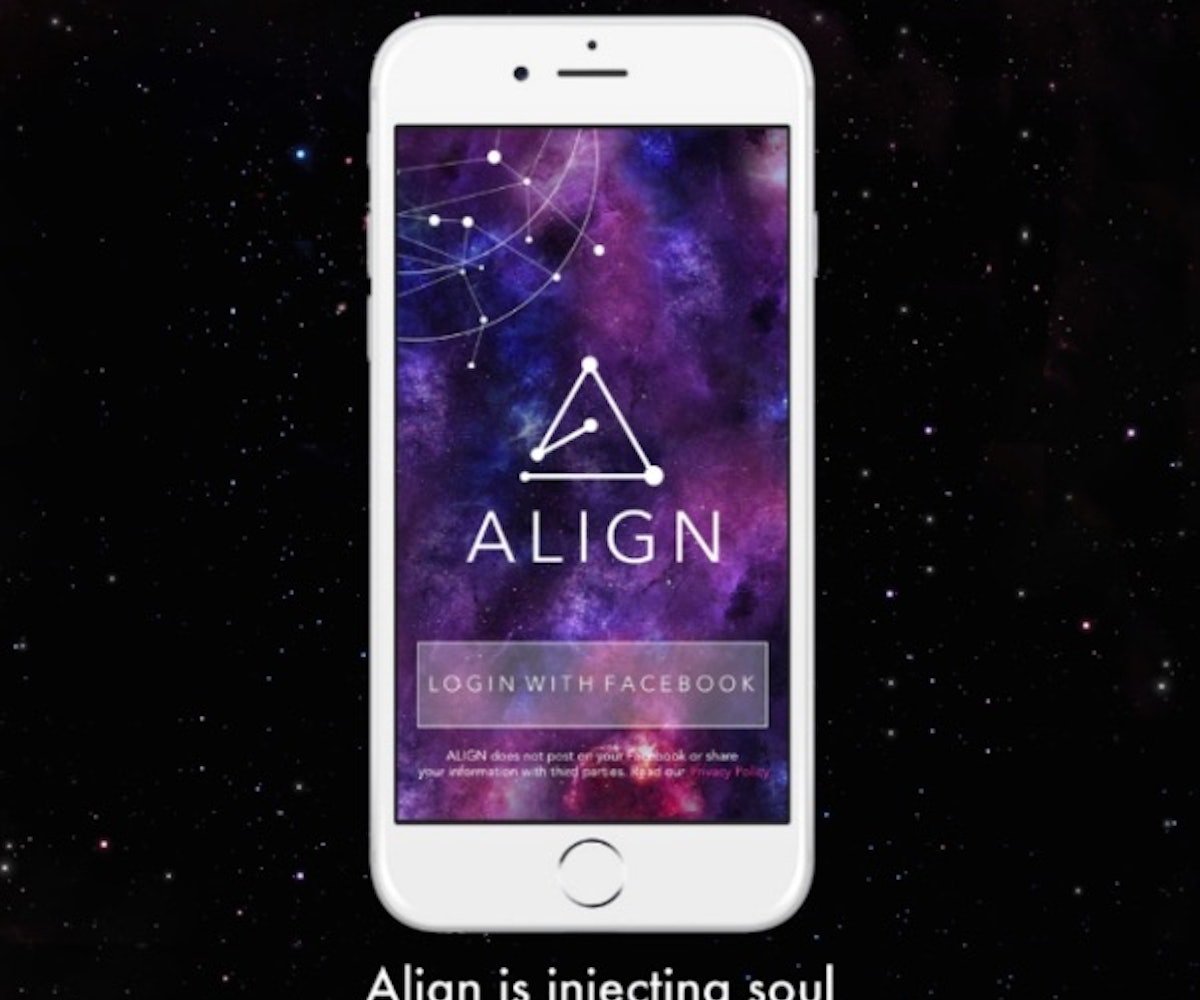 It’s a bit of a Catch-22: In order to find a soulmate, one must first have a soul. I’m not so positive, but I decided to beta-test a new dating app called Align that matches singles based on the compatibility of their astrological signs, which to me are just emojis anyway. (Mine’s a scorpion, for the record.) Tinder, as an alternative, pairs people who, well, want to sleep together, and then maybe round home for a relationship afterward. Other than it being for singles, Tinder doesn't specify what "kinds" of users appeal to the app. At least on Jswipe, everyone is Jewish or hopes to be. Similarly, there’s no one on Christian Mingle who’s putting the prayer-hands in their bio, nor are users of Farmers Only repping Ted Cruz 2016, because duh, we know you’re ‘bout it. These more niche apps attempt to override the discomfort of having to explain one’s essence. Built with that same “we both like this already so let’s date/fuck” model, Align matches singles who put more stock in Susan Miller than Neil de Grasse Tyson, way more. And who can blame them? Why learn about the stars when we can feel about them, right?

So after logging onto Align using Facebook, I filled in some additional biographical info, then picked six adjectives and/or emojis to describe myself. They are, in order: (Fist emoji), “Critical,” “Blunt,” (Big Eyeballs emoji), “Curious,” and “Magnetic,” because my coworker said I should have a nice one in there. After that, I was transported to a screen with an array of potential mates in my zip code, presented as moon-like, photographic avatars orbiting my stupid, lonely face. The people-planets are all cast against a beautiful, glowing solar-system—the cosmic webbing that will ensnare all the hapless, loveless crabs, lions, scorpions, and lawyer scales out there.

I clicked on a young woman who, in her small circle, was throwing her diamond up like Jay Z. Uh oh, we got a Leo. Diamond Hands is 25, and, judging by one of her descriptors, Keeps it 100, which I dig. Maybe this is working? Unfortunately, our compatibility heart is only three-quarters full, and this, I imagine, is somehow the lion’s fault. “Usually water signs and fire signs aren’t very compatible, but a Leo-Scorpio combo can be a powerful matchup. (Case in point: Hillary and Bill Clinton),” reads a block of text underneath her expanded bio. Didn’t Bill Clinton totally cheat on Hillary and drag her name through the muck? Yes, but no matter, Align is an easy-to-maneuver, well-intentioned app that will benefit singles because its very conceit is a conversation-starter. Astrology is mixed up in all kinds of sexiness and soul, so why not?

Believe it or not, I too will be using this app. It’s not because I “get” horoscopes (I don’t) or their parent company, Astrology, a pseudoscience predicated on thousands of years of misunderstanding our universe, no. For me, it’s about finding somebody other, somebody who is a little more open, a little more optimistic, filled with a little less bile, and lastly, willing to trust both an algorithm on a phone and a ponzi scheme in the sky. I’m hopeful, and isn’t that the whole idea here?

Align launches today, but it's available only in Los Angeles for now.