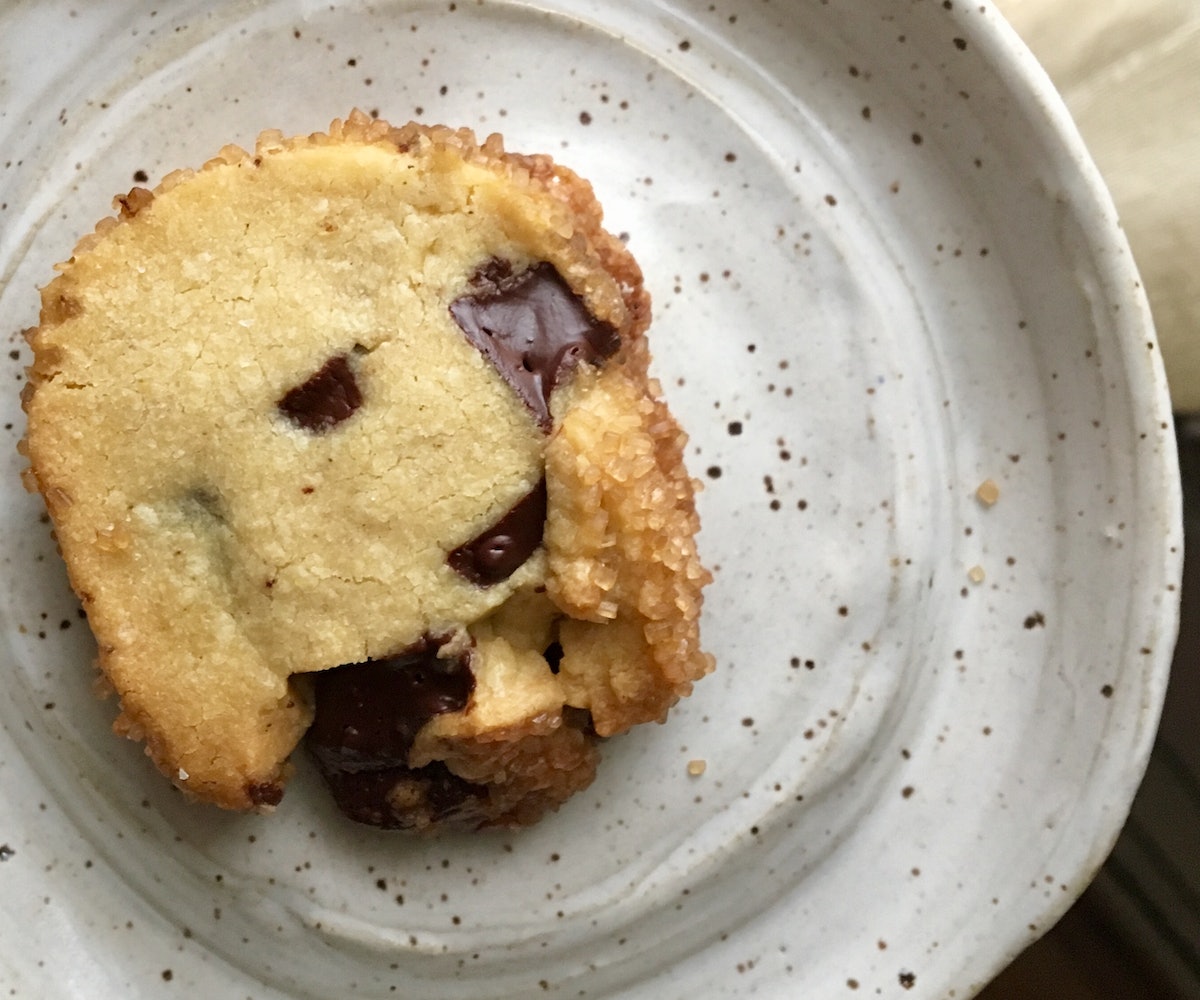 Do you know where you were when you first heard about The Cookie? I know where I was. It was a Friday morning in late October, and I was reading New York magazine's Grub Street Diet, which that week featured food writer Alison Roman, whose cookbook Dining In: Highly Cookable Recipes was about to be published. Roman's Grub Street Diet was filled with food that I both already loved to eat (Xi'an Famous Foods' lamb dumplings! Connecticut-style lobster rolls from Red Hook Lobster Pound!) and wanted to try soon (Thai Son's báhn xèo!), but one thing stood out among the many tantalizing diet details: salted butter-chocolate chunk shortbread cookies.

In Grub Street, Roman mentioned that she has but one cookie recipe in her book, and it's for these cookies. She says that it is, "in [her] opinion, way better than a chocolate-chip cookie." And then she proceeds to nibble on the raw cookie dough, a snacking choice of which I strongly approve. I was intrigued. In part, this is because I like any baked good that includes the words "salted" and "butter," but, also, because I, too, am not the biggest fan of traditional chocolate chip cookies. They've always had too many chocolate chips for me? They're often too dense? I don't know! They're just not my favorite. So, as I said, I was intrigued.

But here's the thing: As soon as I got my hands on Roman's excellent cookbook, I promptly forgot about the cookies, because, at heart, I'm far more interested in all things savory, and there's an artichoke-greens-ultra-cheesy pasta dish that demanded my immediate attention. (To say nothing of the crispy chickpeas and lamb dish that comes with garlicky yogurt, or the crispy kimchi and cheddar omelet, or... I could go on, but I'll stop. Buy the book!)

And yet these cookies could not be denied. They are everywhere. Since I first heard about them several months ago, they've gone viral. Which is, when you think about it, a pretty interesting thing for a recipe that originated in a print cookbook to do! This isn't the same kind of virality that food items like rainbow bagels or Cronuts have attained; you don't get these cookies by standing on line for them on an otherwise desolate New York City street. In order to participate in this particular food trend, you have to actually make them yourself. And that's exactly what people have been doing—in huge numbers. If you check out Roman's personal Instagram, not only does she joke about how much she makes these cookies, but you can also check out how many times she's been tagged when other people have made the cookies, and it's... a lot.

What's so striking about these cookie photos is the sameness; all the coin-shaped shortbeads have a buttery blonde shell and are rimmed with golden-brown sugar crystals. You can see their crunch. This visual consistency isn't just aesthetically pleasing, though, it is also the sign of a good recipe. There's a saying that cooking is an art and baking is a science, and I've always found real truth in that. I'm typically more comfortable cooking; I can be more creative and substitute more freely and not worry about fucking everything up if I forget to add an egg. I've never had a cooking disaster, but I've had several baking disasters, in which I've, well, forgotten to add an egg, and wound up with sugary messes on my hands. And yet I return again and again to baking, because of its inherent reliability and the therapeutic quality of the science of it all. I love the fact that the results are pretty much guaranteed as long as you follow the recipe. And Roman's recipe for these cookies is very simple, containing a mere half-dozen ingredients, most of which you probably have on hand, or can easily run out and get at your closest bodega. The instructions, too, are easy to follow. There's little room for error, then, and a higher likelihood you'll create something that's Instagram-worthy.

This isn't to say this recipe is reductive. And it's most definitely not just Instagram-loving baking amateurs who love these cookies. They have also received high praise from Eater ("try making a cookie that's easy to love"), Bon Appetit ("EVERYONE is making these chocolate chunk shortbread cookies"), and Smitten Kitchen ("they’re buttery, so buttery, and a bit crunchy"). They are one of the few things on the internet right now about which pretty much everyone can agree—a rare and welcome thing, indeed.

There are basic reasons why these cookies are so approachable and adored. They are, simply put, delicious. They strike the perfect balance between salty and sweet, and they are just different enough from a classic recipe to feel adventurous, while not adding anything too unexpected to the mix, and risking the loss of the comfort factor.

But I'll be honest: When I finally got around to making the cookie, I wasn't expecting all that much. I guess I'd grown so used to their omnipresence that they'd taken on the sort of banality that all things viral eventually do. Would they be good? I thought. Sure. But then what? It's not that I was prepared to be disappointed, I just wasn't anticipating enlightenment.

And, yes, "enlightenment" is too strong a word for what I wound up feeling. But still, as I stood in my kitchen cutting up sticks of salted butter into manageably sized cubes, measuring first light brown, then granulated sugar into the appropriate portions, and struggling to mix the, at first, unyieldingly cold concoction into something pliable, I found myself feeling strangely at peace, content in the fact that I was, in that moment, wholly occupied with exactly what I was doing right then and there. It was a feeling not dissimilar to one that I'd discovered when I started knitting and doing ceramics, which reminded me that, though there might seem like there's something alchemical about baking, it is not actually magical. It is simply a task that exists not in the virtual realm of so much else that we do, but rather the real world, where its act results in a tangible product—and a delicious and photogenic one, at that. And while there are certainly recipes that photograph more strikingly—jewel-hued vegetable salads, gooey grilled cheeses—the beauty of these cookies lies in their familiarity. Putting them on Instagram is like sharing a photo of a sunset; they are, in a sense, mundane, but they are all the more beautiful for it.

There's plenty of time to think about all this stuff while making these cookies. After you've mixed it, the dough must rest and chill for at least two hours before baking. I recommend using those hours to take a walk or listen to some music or catch up with a loved one (I did all three of those things). Once the dough is ready, the cookies bake in just under 15 minutes, though they shouldn't be eaten straight from the oven, and will, in fact, taste even better the next day; the flavor deepens considerably. These are cookies that make you wait, and you love them all the more for it. You love them enough to share them with the world, and to let the person who created them know that you made them. This is a small, but lovely thing, this type of celebration. It would be wonderful at any time, but is perhaps specifically wonderful right now, when there is so much negativity permeating our lives, and our social media feeds. This, then, might be why this cookie went viral, because it has allowed us to delight in one of the more simple of life's pleasures, the sharing of food and of gratitude and of, you know, cute photos on Instagram.

NEXT UP
Life
A Studio Ghibli-Inspired Cookbook Is Coming To A Kitchen Near You
Life
On The List (With Melissa Rich): The Highs & Lows Of Solo Partying
Life
Alison Roman Is Getting Her Own Cooking Show
Life
Read An Exclusive Excerpt From I’ve Had To Think Up A Way To Survive: On Trauma, Persistence, and Dolly Parton