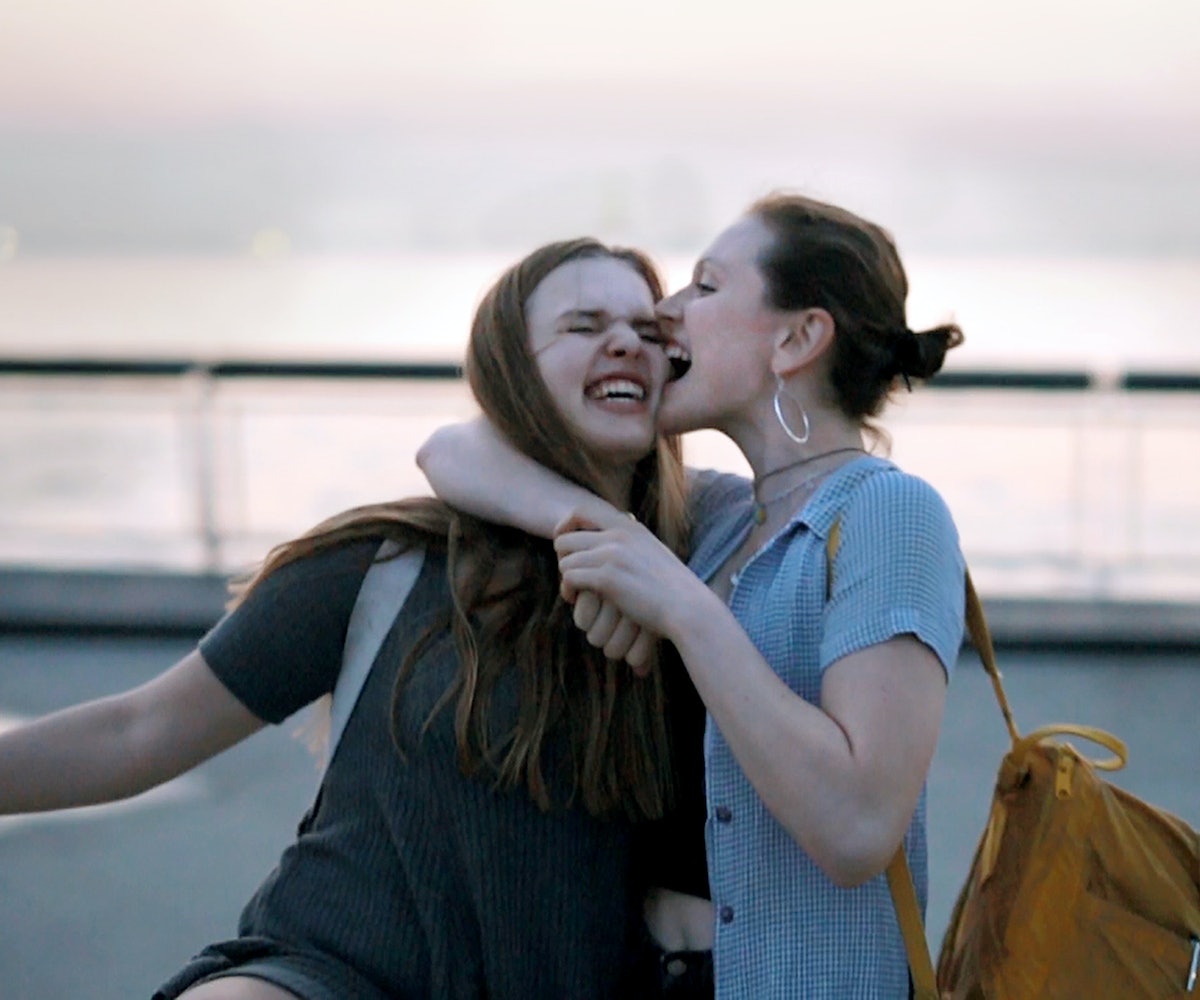 It is our great relief to report that the kids, it seems, are alright. Yes, major publications still spill rivers of ink over the encroaching millennial menace: Are they too into themselves? Can they function in the workforce? Are they having too much sex? Why are they eating so much brunch? But never fear, because a new documentary called All This Panic offers a firm, intelligent rejoinder. Director Jenny Gage and her producer/cameraman Tom Betterton spent a little over three years following around a handful of NYC-bred teenage girls, quietly observing as they grow into women in real time. They screw up, test their limits, fight, flirt, and find themselves, building their identities before our very eyes.

Watching All This Panic, it’s difficult not to make the comparison to Boyhood, Richard Linklater’s 12-year-long fictional chronicle of one Texan kid’s coming-of-age. But the feminine dimension of All This Panic invests it with a greater worthiness of purpose. Teenage girls receive regrettably few opportunities to tell their stories in their words and on their terms, so Gage’s film plays like an empathetic exposé of a world that has been historically dismissed as frivolous or trivial when not outright ignored. But five minutes with two of the film’s subjects, Dusty Rose Ryan and Delia Cunningham, dispel those notions in short order. You wish you were this articulate when you were 18, this levelheaded and at peace with your own incompleteness as a still-maturing human being. Over the course of 30 minutes (and two orders of french fries) at New York’s Metrograph movie theater, Gage, Cunningham, and Ryan expounded on the ins and outs of city living, modern girlhood, and the true reality of fake Instagram.

What do you hope viewers will see in this documentary that they won’t get from interactions with teenage girls in everyday life?

Jenny Gage: The movie gives you a moment to reflect on what teenage girls are thinking and talking about right now, what their dreams are. It’s a diary of a time in a girl’s life.

Delia Cunningham: Dealing with teenage girls as subjects, is, unfortunately, revolutionary. There are a lot of coming-of-age stories about boys and so few for girls, especially ones that don’t treat them as this mysterious object.

Is there anything necessarily different about coming-of-age stories for young men and women?

Dusty Rose Ryan: I don’t think there’s anything innately different between the two, it’s more about the way they’re raised. Teenage girls are talked about a lot. There’s a formed idea of how you’re supposed to be, and the same with boys, but there’s more pressure on girls to adhere to that.

DC: There’s that idea that girls mature faster than boys, so the teenage years of a girl’s life are psychologically different than a boy’s. It’s more a matter of the societal perception of what these years are like versus what they’re actually like.

DRR: Boys are given more leeway in their teenage years to mess up and make mistakes and try new things. “Boys will be boys,” and all that. For girls, you’re taught that all your actions at this age will one day affect your future.

DC: Girls get sexualized earlier, too.

JG: I think the media presents female friendships in a very one-sided way that’s false, too. They’re defined by jealousy and antagonism, but what I really saw in this film was the strong bonds and friendships, the support these girls have for one another.

Social media enables you to create and communicate a persona you assume—this film performs that same process.

DC: Social media is curated, and your identity becomes separate from yourself.

DRR: You can meet people you know from Instagram, which is such a weird concept. Because all you know is the version of themselves that they’ve chosen to put out there.

I was recently speaking with a friend’s younger sister, and she said it’s become common practice to have a personal Instagram account and a fake Instagram.

DRR: The Finsta, yeah. I got one when I was 16 or something, and it’s a place you can post anything and not worry about it. You stress about what you post on Instagram, how many people like your photos, and having a Finsta is a way that you can post things free of judgment.

DC: The idea of the Finsta is way closer to the way I actually live my life. The Finsta is the realer Instagram; the public-facing one is more constructed. And that sucks because I don’t like relying on technology and media for communicating and self-expression. That’s shitty.

Jenny, once you had all your footage, how did you create a lucid narrative without getting away from the reality of the girls’ lives, which don’t always fit into a tidy story?

JG: The fact that we filmed them over a long period of time really helped to create a natural, organic narrative. We didn’t really have an idea of how the film would evolve when we were going in; we just wanted to follow them and watch them grow, hear them talk, and see them live their lives. About three years in, we felt like, “Okay, these girls are ending this chapter of their life.” But we didn’t know what the ending for the film should be, and we didn’t want to set anything up. Lena had been talking about a cross-country road trip, and we were thinking of following her because that’s a classic film growing-up thing. She had a 3am bus out of Penn Station, so naturally, I sent Tom, alone. She grabbed a cab and gave that amazing monologue about reflecting back on her teenage years. When we came home and saw the footage, we were like, “Oh, so Lena just ended her story.” That sat at the end of the film through the whole editing process.

What’s the experience of watching younger versions of yourselves on film?

DC: You distance yourself from the idea of, “Oh my god, I look so bad in this scene” and appreciate it for the full effect, being part of something celebrating girlhood instead of looking down upon it.

What do you think defines a city-raised kid as distinct from someone from the suburbs or a rural area?

DRR: The aspect of freedom. In the suburbs, freedom comes from getting a driver’s license. But the subway, ah, the subway. I was commuting alone when I was 11, taking the subway to school. So you’ve got the city to yourself, you don’t have to go everywhere with your parents. You can step into the world and interact with it.

DC: I love New York, it’s a wonderful city, but it’s also an abrasive city in a lot of ways. It’s not that it toughens you up, exactly, but you are asked to grow up a little faster. My parents were pretty strict, but I have a huge amount of autonomy. If I had to wait until I was 16, and get a driver’s permit, and then learn to drive, I know that’d seriously impede on this freedom.

JG: I’ve actually lived in Brooklyn since college, and my family just moved to Los Angeles three months ago, to Malibu. My son was taking the public bus all the time in Brooklyn, and in L.A., when I tell him to go take the bus with a friend, other parents will be like, “Oh, no.” They’re fearful of it.

DRR: It can be dangerous. You can do a ton of drugs as a 14-year-old because you have access to that. I chose not to because you’re made aware of it, and you see the consequences. It’s not an abstract thing, it’s right in front of you when you live in the city. It gives you the ability to make a more conscious choice in what you’re doing.

DC: The “big, bad city” thing—there’s a truth there. But I feel like there are way more people willing to help you in New York than people let on.

DC: You’re able to interact with people unlike you, and that makes them just as human as you are. I credit all of that to the New York City subway. It is a breeding ground for empathy.

Do you two even consider yourselves millennials?

DRR: I guess? I dunno. Technically, we should be millennials, because we were born before 2000. The older girls in the movie definitely are.

JG: I’ll just say that I love ‘em. I think they’re more feminist than any generation that’s come before, and I mean male and female. Much more politically active.

DC: I think they get a lot of shit, but Dusty and I, we’re a little young to be considered really part of that.

DRR: There’s not much point in characterizing an entire generation with such specific qualities. It’s too broad of a group for that to be fair. Millennials probably aren’t that different than any generation to have come before—it’s just that now we have smartphones and the internet.

DC: Looking now at girls who were our age during filming—14, 15 years old —it’s changed a lot. I am constantly surprised by their ability to do makeup. It’s different now, like, if you were famous on Instagram, it was because you were a celebrity. Now, you can be famous from Instagram. I see young family friends, and it feels so far apart from where I was. I was allowed my tomboy period, I was allowed to be messy and not pretty, I was allowed to breathe a little bit more than most kids in middle school are now.

DRR: Middle school was the worst. I’m so glad Instagram wasn’t a part of my life during middle school. [Laughs]