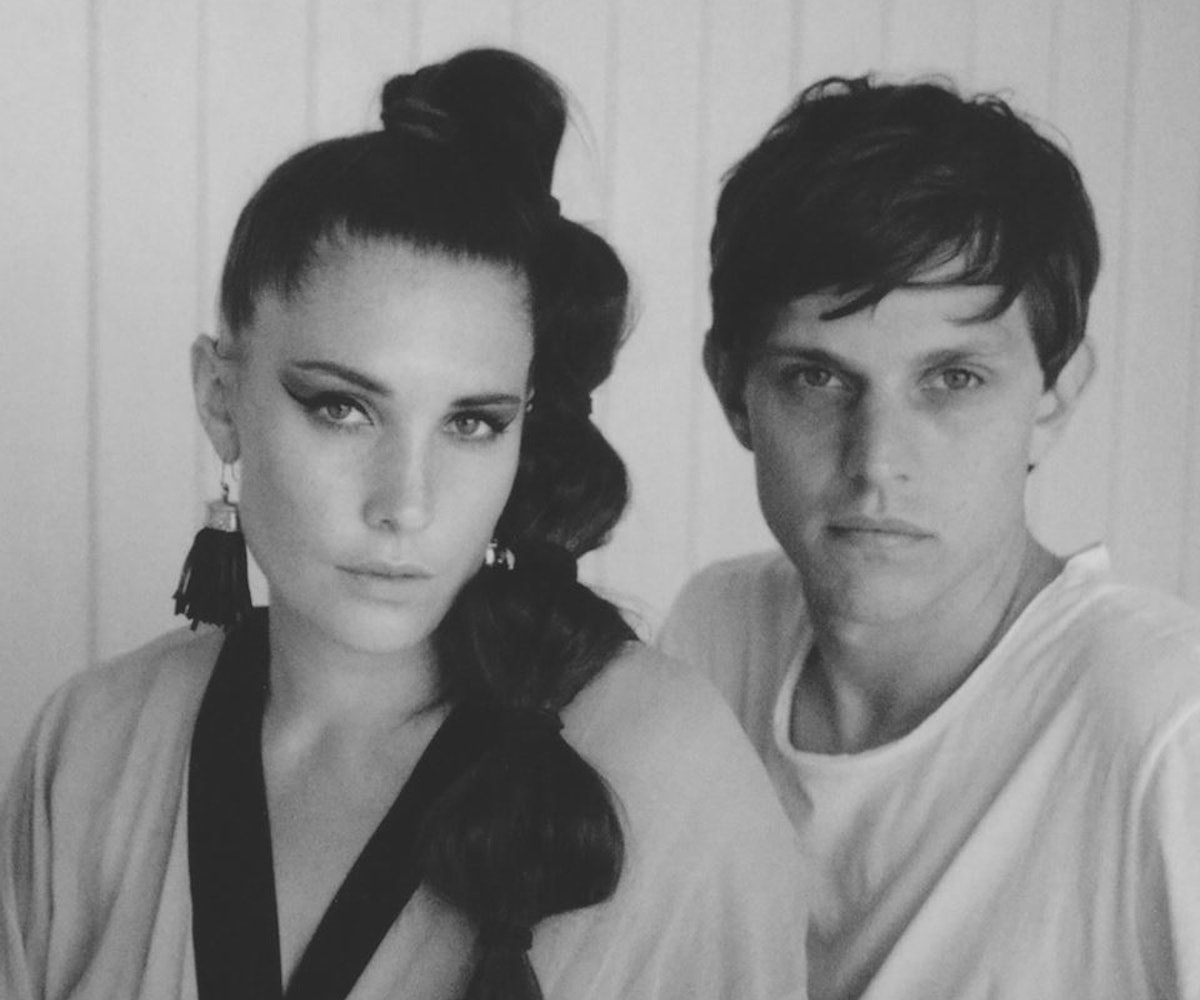 The first time I came across Alpines was back in 2014 when I studied abroad in London. I was instantly attracted to their lush sound, which fully came to fruition with the release of their debut album, Oasis. Add on the vintage-inspired imagery taken poolside, and it was essentially the perfect soundtrack for the summer season.

Comprised of Catherine Pockson and Bob Matthews, the London-based duo has been making emotionally driven R&B tunes since 2011. Their woozy ballads have a way of taking your mind to new places without feeling like it's a total intrusion.

Along the way, Alpines has had the opportunity to work with artists like Florence and the Machine and the Maccabees. They also happen to be friends with The xx.

Pick up where the duo left off and learn more about what they've been up to in this exclusive interview, below.

Let's start off by going back to the beginning. What are your backgrounds in music, and how did you come together as a group?

When we met, we were actually working on lots of different bands and projects with other artists. I was also doing solo work by myself, just as a singer-songwriter on a piano. And then, at a friend’s wedding, I met Bob, who is a producer, and he was like, "I’ve got some ideas, you should just come, and we can just play around and see what we can come up with."

After I left uni, I moved back to London, where we both grew up, and I was just in an indie band, and we all were living together, but it wasn’t really going anywhere fast. And then when I met Catherine, and she played to these other tracks we’d been working on, it kind of made sense to me that there was something good here.

For some people, like in everything in life, you just sort of get that chemistry.

Can you recall your earliest musical memory? Or first exposure?

My mom playing me The Kinks

Bob is really good at going really far back into memory

. I think, for me, it was when I was having piano lessons when I was six or seven. I just felt a bit stressed out by being told what to learn, and I remember feeling like, "I just want to do my own thing." And from quite an early stage, I’d, after my lessons, do my own compositions and just gradually build from there. I always have so much more enjoyment having my own direction.

What artists were you into growing up?BM:

My parents were really into rock 'n’ roll, and I got really into pop punk, emo, and, like, heavy rock. I’m not that into it anymore, I don’t know why. Maybe, when you’re a bit younger, loud music just appeals to you a lot more. When I was in bands, it was a big indie scene in London.

And we kind of grew up at the same time as, you know, people like Jamie T.

The Mystery Jets were around here...

And we all lived in the same sort of town, it was called the Thamesbeat scene. I grew up very much with soul, Motown, and pop. My dad brought me up listening to Prince, and Bob Dylan as well. He was all about the songwriting; he’s always been obsessed with the art of great songs, and he’d always be like, "If you want to write great songs, these are the artists." I think he picked up quite early that I was very much determined to try and write good songs, and was obviously writing terrible songs for, like, most of my teenage life

Can you tell me again about how you decided on the name Alpines? I read that it was inspired by nature...CP:

Yeah, we both like the natural world. We wanted a name that reflected that.

One of the first writing trips we did together was to the Alps. We wanted to do a very long road trip and end up in this incredible location in the mountains. I think I was nannying at the time. I was helping the kid with a geography project or something, and then I just saw the word "alpines," and it was this page about how alpines are actually flowers that grow in the highest reaches of the mountains. They’re very hardy, they survive extreme sun, extreme freezing, and they always flourish. I just thought that was quite nice, that hardiness. Naturally, it’s been quite symbolic in a way because we’ve had such a sort of interesting journey so far in not that long of a time; real ups and downs like I think any musician has really.

Is your forthcoming album a departure from Oasis or still similar to that sound?BM:

I guess after the last album, we wanted to take things away rather than add stuff. And when we were writing, our mantra was always a bit, like, less is more, and let’s not try and do too much. Sometimes on our first record, I felt like we were kind of throwing a lot at songs, and it didn’t need it. So we were more about trying to make sure that there was a really good song and just keeping it to a few elements. That doesn’t mean that the elements that are there can’t be, like, quite weird and complicated. It was just about having a smaller palette to work with.

Just taking everything down to very simple forms. The songwriting as well—for “Completely” and also for the record—it’s sort of stripping away and getting right to the core of what you’re trying to say. It's just very much about raw emotion.

What is your creative process? Do you both write the songs together and then work in the production or do you do it separately?

We’re very different people, I think. Bob is very smart with computers and production and has such an innate ability to work with computers and make things sound amazing, in terms of programming, plug-ins, and all the rest of it. I’m very much hands-on writing songs. We really need each other to make this whole. I think, as a result, there’s that real mutual respect of what each other does.

I think that’s what’s kind of interesting about being an artist of any kind. You’re always trying to carve out this new... and as you develop as a human, you’re going to develop your art as well.

What was your latest single "Completely" inspired by?CP:

“Completely” is just the theme of how when you’re in love with someone, you just want to be with somebody. There’s that completeness to it. It is all-consuming; it really encapsulates you; it’s sort of that moment. And I think that’s what the song is about: vulnerability and that desire to just let yourself go completely. And as well in terms of the visuals, which kind of go hand in hand with it. The desert was a real focus, particularly when writing this song, because I love how it’s one of the rawest landscapes on earth. It’s very brutal, it’s very hard to survive in, and it’s just very exposed. And I like the theme of that exposure.

What else have you been doing since 2014?BM:

We’re starting to put the live set together. We’ve just done one show this year, which was a showcase that we kept under wraps. In between finishing writing for the album, we’ve also done a lot of work with other people. Catherine’s been writing songs for some other pretty big artists, and I’ve been doing production for a few bands, which has been fun.

It’s just kind of a period of getting all those plates fitting again. There’s so much stuff that you’ve got to keep building behind the scenes, and making sure that it all comes together in these launch moments. And getting a really good live show together. That’s really important for us this time because there are these slightly new elements we’ve approached in this record, so it takes this new direction for a live show.