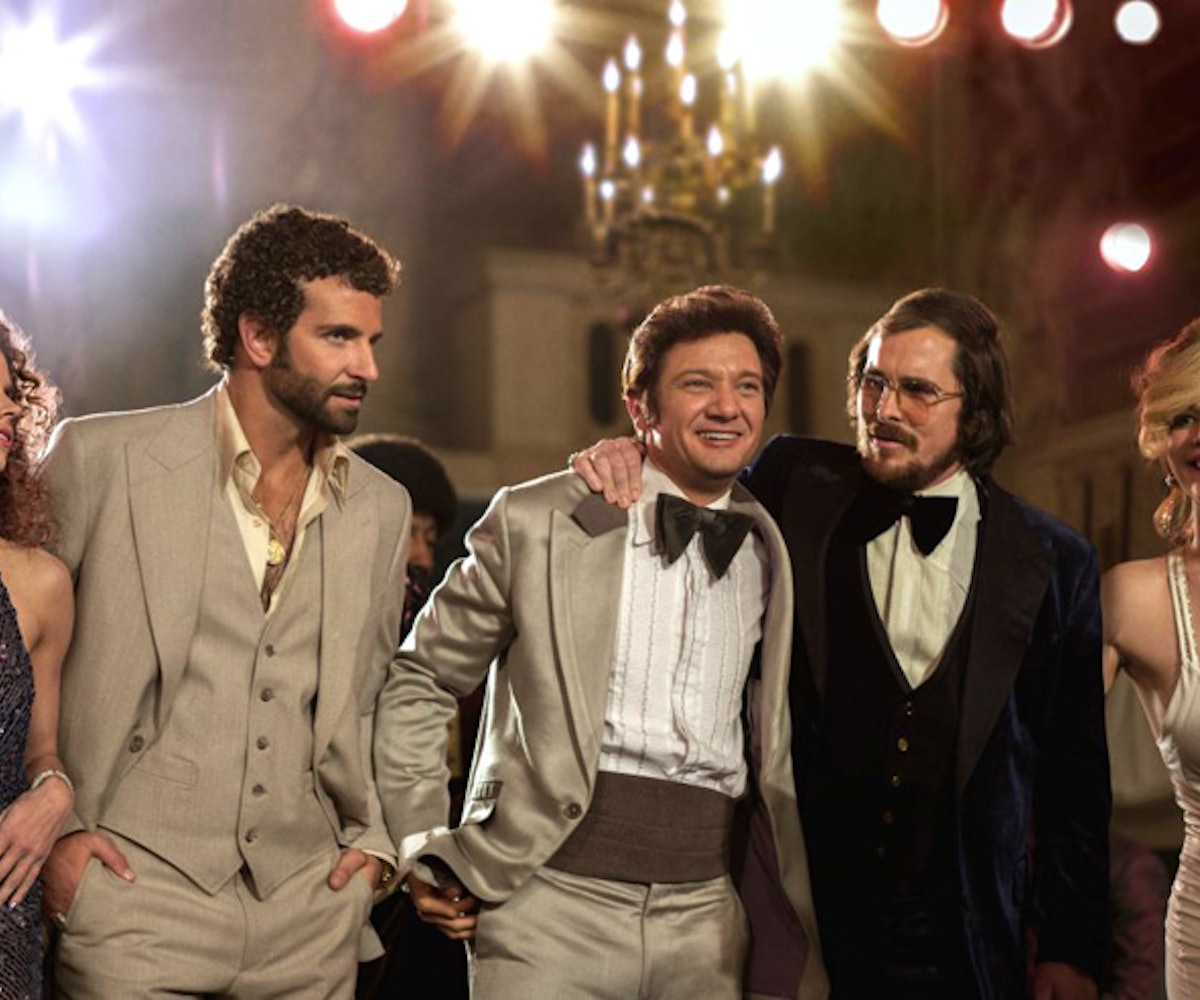 When you take a beloved director like David O.Russell, couple him up with an A-team cast (that would be Amy Adams, Bradley Cooper, Jennifer Lawrence, Christian Bale, and Jeremy Renner), and throw in a curveball con scheme, the odds are pretty damn good that the movie is going to work.

But here's the thing about American Hustle: it doesn't just succeed. Russell's new comedy goes way beyond our expectations--and that's exactly why you should probably second-guess whatever you're planning on doing tonight, and grab your friends to see this film instead. It's been rolling a massive wave of hype ever since the first trailer dropped several weeks ago. But while there's been no shortage of sneak peeks or costume drama, the details on the plot itself have been scarce.

Set in the late '70s and loosely based on the Abscam scandal, the flick follows a couple of con artists named Irving (Bale, who rocks an incredible combover) and Sydney (played by Adams), who are trying to ditch their sketchy pasts and dip into something even sketchier--providing fake bank loans and selling faux art. When they're caught red-handed by FBI agent Richie DiMaso (played by Cooper with amazing mini-curled hairdo), they're forced to help him catch white-collar criminals in lieu of jail time. They set out to catch the New Jersey Mayor (Renner), who unknowingly is taking money under the table, but obviously nothing goes as planned. Packed with curveballs and a totally unexpected twist at the end, the story is entertaining enough on its own. However, it's the motley cast of character that really makes things next-level.

Bale, Adams and Cooper carry the movie--they're in 90% of the scenes--and between the three of them, the energy is contagious. Bale somehow manages to give a criminal heart (and even make his life a little sad); Adams can turn from sweet and sensitive to conniving in a split-second, and Cooper's arguably the funniest of the bunch, with an over-the-top confidence and hilarious puppy dog gestures. This isn't even touching upon Lawrence, who brings her supporting role as Bale's depressed wife Rosalyn to life in a way only she can. She's over-the-top, kooky, and spot-on ridiculous...and yet she still totally knows what she's doing. (P.S. Without giving anything away, after her performance, you'll never look at nail polish the same way again...)

This is a film you can see with your friends, your boyfriend, your family--even your grandparents!--because it's smart, funny, and 0-percent awkward. It's that rare ultimate holiday season movie you can watch over and over, and we're already counting down 'til we can see it again.