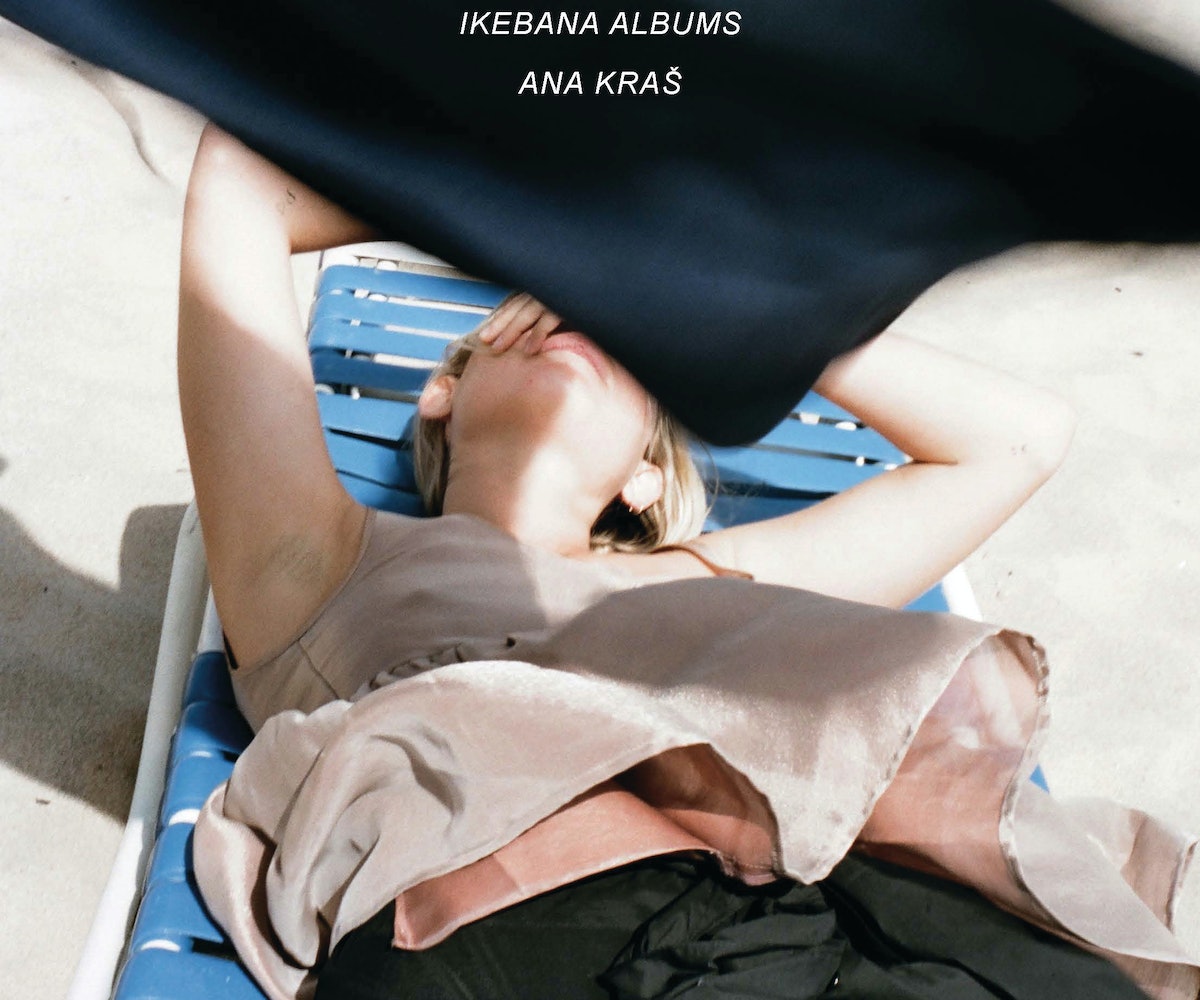 Ana Kraš is a woman known for many talents: design, illustration, photography, modeling. Though many would simply label Kraš as an artist, she's not too keen on the term. "I literally use it when I’m too lazy to talk," she says. "But I guess, generally, if I were to describe the meaning behind it, I think it takes someone creating self-initiated emotional content that is not needed, but that makes this world a better place."

Kraš has always viewed photography as more of a hobby rather than a profession. "The kind of photography I do, there is not much to learn except to load the film into the camera," she says. Her interest in the craft began when she was around 15 years old when she would take photos of people in crowds using cheap Russian cameras that she found at flea markets in her hometown of Belgrade, Serbia.

While Kraš studied at the University of Applied Arts, she didn't actually get her degree from the institution. "I didn't get my diploma because there was one theory exam that I didn't do. It's like an ongoing fight with me and my mom because I just really disliked my school and there was a teenage rebellion," she says. "I was like, 'Okay, I'm going to do everything, but I don't want a diploma from this place,' because I hated it so much. It was very corrupt and very bad."

Kraš recalls how the university didn't have a single computer on campus and how she once had a professor who only showed up three times during an entire semester. However, Kraš's deep interest in her subjects motivated her to do everything on her own. She pushed herself to work hard in spite of it all, and she ultimately succeeded.

"University is amazing because it gives you structure. Even if you hate it and you don't like your professor, it's one of those things that requires an ability to complete things," she says. "No matter if you are in the mood or not, it's kind of like a really amazing thing for life. I think that's why school is very important."

In terms of the value of getting a degree in art, Kraš believes that it depends on the individual. "Obviously for some professions, it matters greatly. But for me, in the things that I do, it doesn't matter," she adds. "What matters is if you have the qualifications and if you work hard, and that is something that you can do with or without school."

During her 20s, Kraš started sharing some of her photography on the internet through Flickr, long before Instagram existed. At some point, she transitioned to Tumblr, as well, where she reached an even wider audience. Eventually, all of the attention Kraš received on social media led to people asking her to be featured in publications, books, and exhibits around the world. Some fashion brands even asked her to do editorial work for them because of how much they admired her work.

Now at the age of 32, the creative is exploring new territory by releasing her debut photography book, Ikebana Albums. The project has been in place since last fall when Kraš was approached by German publishing house Prestel. All 196 pages contain images of personal and sentimental value to Kraš, some dating all the way back to her childhood. None of the subjects in the photos are named, but you're bound to recognize a few famous faces as you flip through the massive volume of work.

Learn more about how this book came to fruition in the interview with Kraš in the gallery, below.

Could tell me the meaning behind the name Ikebana?

Ikebana is a really ancient art that comes from Japan, it's the art of arranging flowers into into a balanced and minimal art installation. I've always been into Japan. When I was around 15, I spent some time in Japan and among other things i got introduced to the Ikebana practice. I went to a few shows and i was in love with it. The women would quietly and slowly with so much focus and care put together flowers, stems and branches, making those abstract ikebana sculptures.

Many years ago, a friend of mine gave me a nickname because it was rhyming with my name: Ana Ikebana. And then when I was sharing photos of mine [on the internet], I didn't want people to know it was me because there was a lot of intimate photos and I generally prefer when photos are not associated with names and people. That's why in the book, it doesn't say who is who. I had to come up with a name so I decided to use that as a pseudonym. I think that I had a Tumblr or a Twitter called Ikebana, so

also comes from that. Even tho it was pretty random, the name made sense because editing photos is like making an ikebana—the feeling depends on pairing and the flow. It's kind of like another similar art of making an arrangement that really can change the flow and energy and streaming of things.

Why did you decide to publish all your photos in this book? I remember you used to share images on the internet for quite some time, but what made you want to have them in print for many people to see?

Most of the photographs that are in the book have never been shared before. I used to have a Flickr account many years ago and after that a Tumblr blog, but ive never gotten into it and would rarely post anything. As people started knowing my work and started associating me with my photos I kind of stopped sharing my photography on internet. And then I got asked by Prestel to do the book and, to be honest, I was really surprised at first because I didn't think people really knew about my photography. I was really happy that I had all this material that no one has ever seen because nowadays, it's usually, like, you see everything and then it ends up in a book or on social media which is something I really don't like. I like to see new content. Once we agreed on making this book, I was really happy that no one has ever seen most of the images, because nowadays it's very usual to see all the content on social media before the project is done. I really dislike that. The context is something that matters to me a lot. When sharing photos online, they can be reblogged and put in so many different contexts and that is something I don't feel comfortable with. book it's really something else. Of course you can also take a photo and put it online, but this is so much work. Online it's too easy, it's just a click.

How far back do some of the photographs go? How did you go about selecting which images to include?

It's a collection of photos I took in the past decade more or less. There are photos there that are from 2007 and on. The opening image is a very first photograph I remember ever taking — I was six or seven years old. its a photo of my sister. It's impossible to pick the best images, you can only follow your gut and your feelings on that day because the next day or the day before you would probably pick something else. I really wanted the edit to be unpredictable and hectic because the photos are that way. It's not a consistent book in any kind of way. it's like an ikebana so I wanted it to feel that way, kind of random and hectic.

What are you hoping other people take away from seeing these images?

I don't hope for anything, but hopefully someone will like the experience of flipping through the book. Photography is all about the feeling, there are no bad photographs and good photographs..  All art is subjective, and a matter of a feeling, especially photography. It all about if an image moves you or it doesn't. A photo of a flower can make someone really happy and someone else really sad. So I have no preference. I would be very happy if this book inspired kids to take photos. Not only kids, but anyone really. When I started taking photos it wasn't ever for the purpose of a book or anyone to see them, it was really for myself because I loved to document people and things around me. And now, years later, it's a book.

What else are you currently working on?

I'm busy with many very different things. I did a collection of swimsuits for the next season, and about to share it with the world. I am doing some interior projects at the moment, I am working on some new pieces for the next design week for Milan and New York... I don't like to talk about it, I like to keep it secret. But I'm working on different design and furniture projects and some other fashion collaborations.

How has your home base of Serbia influenced you?

I'm not totally aware of how, but I I feel like it's probably implemented in my point of view because it has an unique aesthetic. It has a particular history and there was a very particular kind of time when I grew up there. When it comes to photography, there are a lot of photos from there because I was there until I was 26 so it is a very big chunk of time. I took a lot of photos of things there and my life there. There was a lot of communist architecture and interiors that look very much in that style. It looks different than places in the rest of the world. colors are darker and dirtier and everything is very improvised. Some people say there is some sort of communist feel to my work. I guess its because where I come from things look that way.

All of the work that you do, whether it's photography or furniture design or illustrations, involves working with your hands. It made me wonder, how would you describe your hands and what they can do?

I wish they could do more. I wish they could play instruments and stuff. Photography is not so much about hands, photography is just about an eye. But drawing, painting, those kinds of things are really handcrafted. Its easy to do things with hands for me, the easiest thing is to draw. You know how when you're writing a letter or an essay, you don't really think about writing? It feels as if your hand is writing it down itself. I feel that way about drawing, it's like a handwriting. That is for me the most natural thing to do in my entire life, so hands are like an extension of my head.