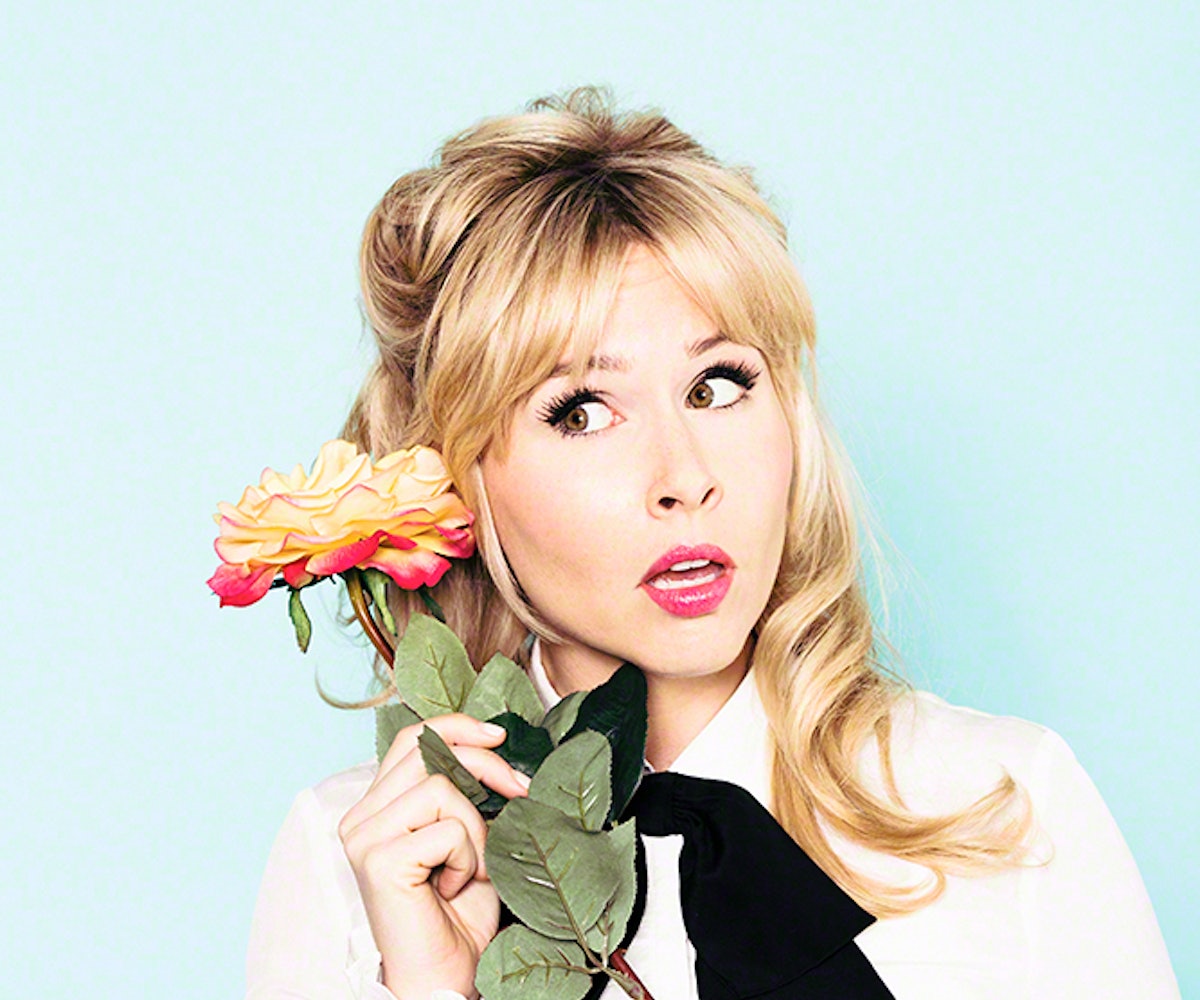 Working on a show created by Steve and Nancy Carell is a gig any comedian would dream of, not to mention a show that also stars Rashida Jones as its lead. And for Andrée Vermeulen, that gig just happens to be the breakthrough role she's been working towards since the days when she first began taking classes at the Upright Citizens Brigade in New York. Playing Doctor Monica Scholls on the ultra-dry TBS detective comedy Angie Tribeca, Vermeulen had to leave her sketch comedy instincts behind for a role that demands more subtlety—and also offers the opportunity to work alongside Rashida Jones, who plays the show's titular role.

As a newcomer to the small screen, Vermeulen is flexing her comedy chops to help create a show that's wholly irreverent, snappy, and wonderfully bizarre. We spoke to her about getting the part, who makes her laugh the most, and her talent for freestyle rapping.

In the past few years you’ve done a bunch of comedy projects with companies like Funny or Die and College Humor. Would you consider your recurring part in Angie Tribeca a career-turning point?

I would! I’ll add that I’m also a performer at the Upright Citizens Brigade so I came up through UCB as my main place, and I’ve been involved heavily with College Humor. But yeah, this is for sure a career-turning point. This is my first series regular in a show, which is a huge deal, and to be involved with Steve and Nancy Carell is a massive deal.

It’s such a great show, too.

Yeah, and I do feel lucky, in terms of comedy, to have this role because it gives me the opportunity to work on a side of my comedic ability I hadn’t really been able to exercise because the tone is specific. Everything is so dry and everything is said so straight. It’s more subtle. Even though I have a sketch comedy background, I started in improv and I moved onto sketch comedy. So, I was very used to performing on stage in front of an audience. If you’re going to play something subtle on stage, it's still way too big for camera and way, way, way too big for this specific type of comedy. I feel really grateful to get to work on that.

You’ve made some TV appearances in the past and you’re also a voice actress on the How to Train Your Dragon TV series. Is TV something you’ve been trying to get into for a while as you've also been doing sketch comedy?

Yeah, this was always the goal, and there are always different paths to get there. I’ve been really lucky to do a lot of fun things along my path. How to Train Your Dragon is a dream come true. It’s so fun, and I get to play Ruffnutt, who is Kristen Wiig’s character in the movie—so I had to voice-match her, which is really fun. Everything along my journey has been really cool, but this has always been one of the major goals for sure.

What was it like training through UCB, especially as a place that has so many notable alumni?

I started in New York and took all the improv classes, and then I auditioned for a sketch team, one of their first rounds of sketch teams, and after that I pretty much stayed in the sketch world. I absolutely credit them for pretty much everything I have ever accomplished. They have been unbelievably supportive of my career, in ways that I didn’t even know were possible. It’s a really great outlet to experiment with. That’s the whole idea in comedy. Sometimes you’re going to fall on your face, but you move on and you become a better writer, a better performer, a better overall comedian. I 100 percent give them credit for kind of ushering me along.

How did you get involved in Angie Tribeca?

Just a traditional audition process! I auditioned for the role—I actually thought I was wrong for the role because I never played a character like this. Scholls is like a human robot. She’s so cold and strange and I, as a person, am pretty warm and bubbly, and I’m pretty used to playing characters in that vein. It was really interesting for me to play her and go into that audition thinking it wasn’t going to be right for me. And then I got a callback and Steve and Nancy were both there. In that callback, Steve encouraged me to do improv. It was kind of surreal for Steve Carell to be coaching me. Then I had one last audition in the final run for the part, and I had to do a live test in front of all the network executives, which would be nerve-wracking, besides the fact that I’m used to performing for an audience. When there’s an audience, I revert back to my sketch comedy roots, so I had to really, really reign myself in. You don’t want to get your hopes up, so I was at home eating macaroni and cheese feeling bad for myself and thinking, “Well, that was fun. I’m sure it went to a really great person.” And then I got the phone call and I had to snap out of my self-loathing and enjoy the moment.

The show is so funny, but as you said, your character always has a straight face. Were there any actors you found it particularly hard to stay in-character around?

Oh, yeah. We’re shooting season two right now and we just had Maya Rudolph on, and she makes it almost impossible not to laugh. I can pretty much keep a straight face, but we did shoot a scene where she’s whispering really stupid things in my ear—that was probably the biggest challenge I’ve had in both season one and two. She’s so funny.

You interact a lot on-screen with Rashida—is there anything you learned from her?

Yeah, she’s so good. She makes her role look so easy, but the work she’s doing is extremely hard. I think one of the greatest things I’ve learned from her is how far subtlety goes. If you’re standing in front of someone and they’re doing their lines from a scene, sometimes it can look so subtle in person and when you watch it on camera, it’s just the right amount of energy. I think she’s especially good at that. And for me to be working on bringing it down, getting away from that large sketch comedy performance, I think she’s an incredible person to look to.

Everyone loves Steve Carell as Michael Scott in The Office—what’s he like as a boss in the real world?

He’s so incredibly down-to-earth. He’s just a normal person, and you realize he’s actually kind of serious and not that silly. He’s funny of course and his humor is very dry, like he’ll say little things with a straight face, but he’s just a normal guy. It’s pretty spectacular.

You also have some serious rap skills. How did you get into that?

I think it’s just an improv gene. It’s basically musical improv, but with a different beat. I’ve always been into rap. My mom was into rap. My mom would tell me about the latest rap songs before they were out. I’m really mad I switched phones because my mom had left me a voicemail where she was rapping “Juicy” by Biggie. I’m not sure when I learned I could freestyle. I call it improv rap because it’s so silly. I’m not hardcore in any way. I like to rap about stupid stuff. If you watch me do it enough, you can see when I run out of things to say, I just start rapping about the fact that I’m rapping. That’s how you know as an audience, “Uh oh, she doesn’t know what to say next.”

The entire first season of Angie Tribeca was released at once, and now you’re filming the second season. What was it like working on so much of it before anyone saw it?

Well, we filmed the season like you traditionally would in 10 weeks, but I think the strangest thing for me was that we started this two years ago. We shot the pilot two years ago, it got picked up, and then we waited a year to shoot the first season, and then the first season was held for a year. Especially for my first show, it’s a real game of patience to wait two years for this thing to come out. I’m sure everyone has thought that I made it up, like, “Oh, Andrée must be this pathological liar. She swears she booked this show. She probably doesn’t have an agent.” So it’s just great to have it actually out and be like, “This is that thing that I was talking about two years ago!”