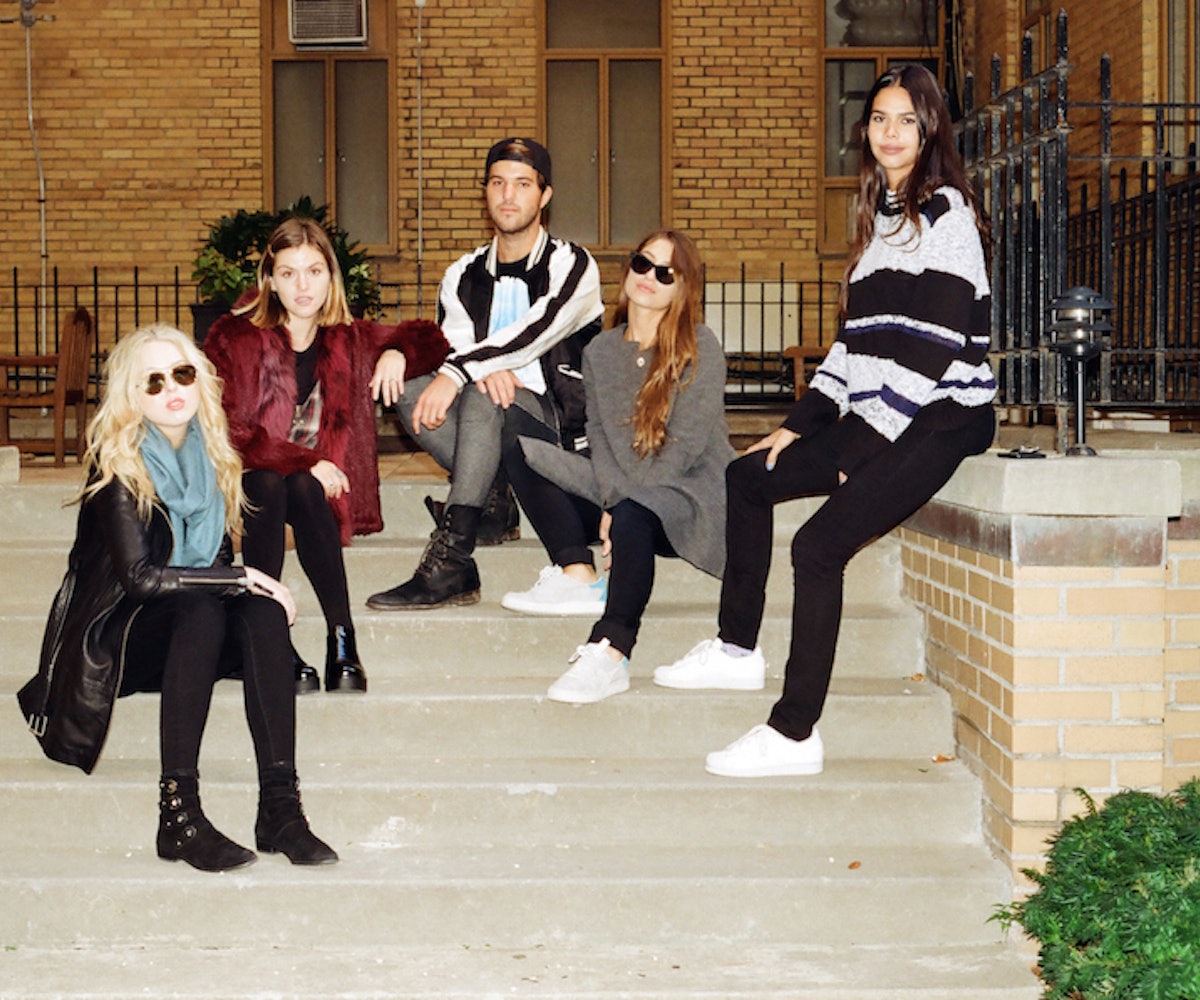 When you're born with a household name, raised in sprawling mansions, and exposed to the world's most consummate artists, minds, and social circles, you're not only poised to become somebody—you're forced to become one. And while many inherently become fixtures on the late-night scene, for Andrew Warren and his clique, being a socialite is a bit outdated. They have business savvy and massive social accounts, and they're using them to become a new type of celebrity—one that's not so much "famous for being famous," but one that's transforming their family legacy to fit their interests.

Since Rich Kids of Instagram started re-posting photos of them a few years back, Warren and his crew have acquired their fair share of fans, who are quick to point out their Gossip Girl-like qualities, and negative criticism, which has only brought attention to their projects and made them all the more noteworthy. Warren, the grandson of fashion mogul David Warren, started his own ready-to-wear line, Just Drew, back in 2013. Gaia Matisse, the great-great-granddaughter of Henri Matisse and the daughter of artist Alain Jacquet, is an aspiring actress and model. Reya Benitez, the daughter of Studio 54 DJ and producer John “Jellybean” Benitez, works for a concierge company and recently began a career as a DJ. Tiffany Trump, whose father is that Trump, is finishing up a degree at UPenn. Tessa Gourin, who is perhaps the epitome of an "It-girl," is a poet and actress.

We caught up with Warren to talk about their friendships, Hamptons mornings, and what it's like for the Internet to monitor your every move.

How and when did you all meet?I've known most of my friends for years and years. Tiffany Trump and I met when we were three years old; we have the cutest baby pictures together in my house. She moved to L.A. and we fell out of touch for a bit, but we rekindled at a dinner at the Soho House in L.A. when we were around 16. I was with our other best friend, Gaia Matisse, and we all just became close. Now that she's living in Manhattan when she's home from UPenn, we get to be together all the time.

Reya Benitez was a year older than I was in high school, but we met when I was 17. Reya was so shy when we first met, but she's opened up so much and has become really confident.

At that time, I would have considered myself a guy version of Blair Waldorf from Gossip Girl, haha. I've always collected girlfriends like people used to collect Pokémon cards, or whatever people collect, and I've built my own sort of army. If you're reading this and thinking That’s not true or I didn’t want to be friends with you in high school, that’s because I wasn’t giving you the time of day and you know it.

The Rich Kids of Instagram account really helped to introduce you to a new audience. Looking back, what are your perceptions of the account? I remember being in St. Tropez when the account was first made. Honestly, at the time we all thought that one of our close friends was behind it, because the account was only posting photos of [our] group at that time. It later expanded into what it became, and we still have no idea who's behind it.

When I was posting things on my Instagram, I never thought I'd get any attention of that sort, or intended it. Now, though, from a business perspective with my line, Just Drew Clothing, I don't think it's so bad to have the extra following that originally came from that account. I know that there are people who don't like me because of that account, but going to high school in New York City gave me thick skin, so stuff like that really doesn't get to me.

Has it helped bring you opportunities that you may not have had otherwise?Besides exposure, I don’t really think so. I think sometimes people find me based off the website and then look further into me, which is great because they realize there is more to me than those few pictures. It's hard, though, because I think that my humor is often mistaken for rudeness just because social media is so open to interpretation.

Growing up, did you each have a sense of how influential your families have been?I am really fortunate in that my family has been around my whole life. My parents are really happy together, which is something that has always made me happy and something that I don't take for granted, especially growing up in New York. If we're talking about family, I have to mention my babysitter Mons, who I call Lita, who's been with my family for 28 years. She's like having a second mom, but funnier. Most of my Snapchat followers actually come from me Snapchatting her so often. In terms of being influential, my parents and grandparents have been so influential to me my whole life, but they've also worked really hard to give me a sense of normalcy and keep me grounded, despite what social media depicts. As for Tiffany, I think her family has influenced her passion for business, just like Reya's family has influenced her major passion for music.

How important has the concept of legacy been in your upbringing and sense of selves?My grandfather was really big in the fashion industry during his time. Unfortunately, he passed away before I was born, and left the company to my father, uncle, and grandmother. His name is actually on the statue of the man sewing in the garment district! His company was sold when I was really young and my family changed businesses, but now that I'm doing Just Drew Clothing, my whole family gets to be a part of that world again... Even my grandmother, which I think is really special.

Has the upcoming presidential election influenced your group in any way? Do any of you have political aspirations? I was taught at a young age that politics is not something you should discuss socially, because it is such a heated topic and everybody is entitled to his/her own opinion.

Take us through a typical day that you spend together. I'd have to give you a day in the Hamptons during the summer because in the city, all year long, our days are really all over the place, and during the summer we're all together. All of the girls sleep at my house, which becomes a sorority known as “Warren on the Cobb” during the summer months. I always sleep with my best friend Karen Shiboleth in my room, and somewhere else in the room or on the end of my bed, maybe even on the floor is Kyra Kennedy, who never sleeps without a "Dreaming of Paris" mask on. I quickly blast “Do it Again” by Pia Mia on my speakers, and blast them until Kyra decides to wake up. In the guest room, known as the blue room, sleeps Tiffany Trump, who won't wake up without iced coffee. Abigail Breslin is in another room, and she is no Little Miss Sunshine in the morning. I walk into the her room and am like, “Cousin Itt, is that you?”—not that I’m one to talk, because I look like a cockatoo who just got the electric chair. (Sorry, I am not trying to turn this into American Horror Story: My Friends In The Morning.) Then, I head downstairs where Reya Benitez is snoring. I step over Gaia Matisse, who is on the floor because she somehow didn’t make it to the bed. Before I wake them up, I take a million Snapchats and then blast the music and wake them up, too.

We all head into the car. Karen is driving and I always get shotgun. I always get to DJ the car rides, which is really unfortunate for everyone else. I quickly blast some bad ‘90s music, and then we head to Hampton Coffee to get our breakfast. Then, we hang out by the pool and Instagram pictures on pool floats during the day (I have so many that my backyard looks like the Bronx Zoo), and have a pseudo-Suki Zuki family dinner at my house at night before heading out to Surf Lodge in Montauk and then 1Oak in Southampton, or The Club in East.

I read that you were offered a reality-TV show, but turned it down. Would you be open to exploring that type of medium somewhere down the line?I would probably consider that type of medium in the future... I think it's all about timing, but I think I am someone whose personality would definitely show more on camera than it does on paper or on social media.

What projects are you all working on?Besides my clothing line, I do a lot of charity work. My best friend* Natalie and I do a lot of work that all of our friends help us out with. Currently, the main charity event we're working on is the Botanical Garden's Winter Wonderland Ball. Also, Tiffany, Reya, and I were a part of VH1's Save the Music event this summer, and we're all helping out with their upcoming winter party, as well. My parents have always stressed the importance of giving back, and I am hoping to do the same to others through my own social-media platform.

*I know this is the 100th time I have said "best friend," but I really only have friends that I consider best friends.

Anything else you'd like our readers to know?My life is about as public as a New York City bus, so what I didn't say here I'm sure you can find out about me on social media. Beyond that, I'll leave a little bit of mystery. A little.

NEXT UP
Culture
Remember When Gossip Girl Made The Quintessential Thanksgiving Episode?
Culture
In Cann’s Holiday Campaign, The Greatest Gift Is Being Chill
Culture
Mowalola Teams Up With Bratz For A Daring, High Fashion Collection
Beauty
“Cold Girl” Beauty Is TikTok’s Most Baffling Winter Trend