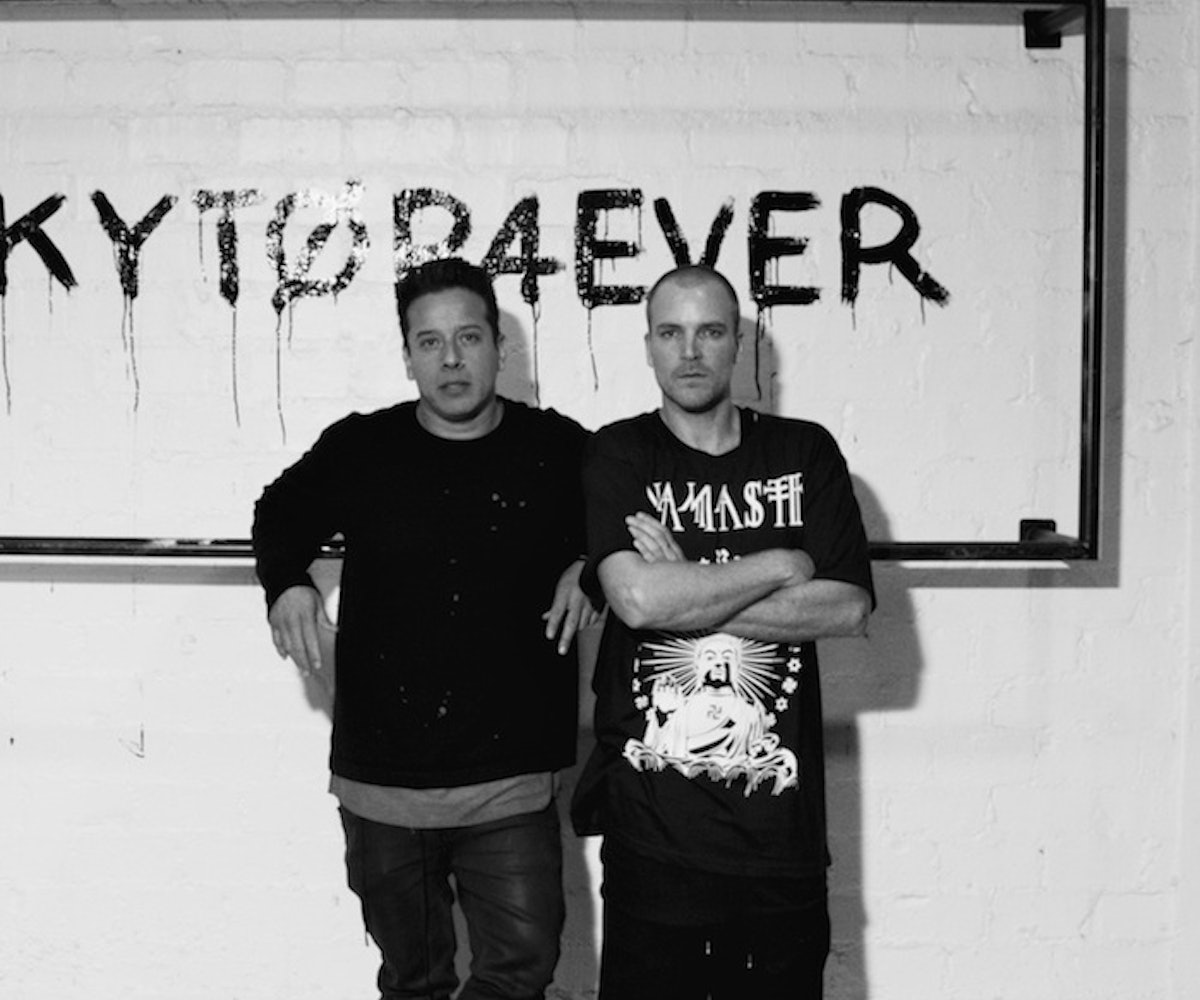 There are few in the business of fashion like

. Usually when brand owners and designers are gearing up for the launch of their next flagship product, you wouldn’t find them running around putting the finishing touches on the retail space that is set to host a few hundred fashionistas, Hollywood sycophants and athletes. But upon our early arrival at

, Muska not only greeted us at the door, but scrambled around adjusting the store, coordinating the back patio’s flow and wrestling with a freshly painted “IV” banner. Of course, what would one expect with such a cool company like

? Their careful curation and grass roots approach has led them to the upper tiers of respect amongst both street and high fashion fans alike. Their passionate approach to art, design and culture has constantly set them apart and keeps changing the game, one step at a time. Before the droves of fans, friends, and collaborators would arrive, I got to discover the zen of both Chad and Angel. Their enthusiasm is and passions are a great example of

’s mission to relate and create.

I was reading about the initial resistance to the original Skytop- that they said it wasn’t going to work and yet the people proved the experts wrong. Let’s talk about the evolution of the shoe...

For me, I just try to create products that I’m proud of and make me happy and feel that I can create something that doesn’t exist in the marketplace for us. Its important to me to always bring something new to the table. That’s what I want to do and give the sense of individualism to somebody that can purchase these shoes...and hopefully it appeals to a mass amount of people as well. So, its like, if you put this shoe on, you’re not gonna have just one specific look. Like, if you’re heavily into hip hop you can wear it this way, or for fashion and rock and roll you can lace it differently, you know? All different ways that can create something that is appealing to the masses but staying true what I want to create.

When you wake up in the morning, what drives your creative edge? You’ve had massive success as both a skater and creative.

I think they’re kinda one in the same a little bit. With both skating and creating you have to conceptualize something and challenge yourself to manifest it into reality; whether its a trick, a shoe design, or any of that stuff, its stimulates the same thing inside my brain. Designing shoes, making music, painting, all of them are interconnected and feed and inspire one other. In different orders. (laughs)

What’s the best advice you’ve ever been given?

Hmmmm. I think I’ve yet to receive it yet...But actually the best I’ve been given is that advice is easier to give than to live by. (Laughs).

What posters did you have on your wall as a teenager?

I never really had many but every once in a while I’d tear up magazines and I had skaters like Christian Hosoi and stuff like that and then I started to get down with Brooke Shields and Kate Moss.

I don’t really watch TV and I haven’t since I was a really little kid. I like to watch things that are educational or inspire me to do something that’s real. I can’t really watch movies because, even if they’re based a true story, the fact that your not watching reality is disturbing to me.

So what inspires you?

Right now I’m really inspired by ancient technology and finding out where our place is as humans is on earth- where we’ve been in the past and where we’ve evolved to now. Understanding the past helps me understand the future. I’m really interested in our history as humans.

So ancient technology is what you’re studying...what is impressing you in our world right now?

Impressing...For me, what’s impressing is the amount of people I run into on a day to day basis that are evolving in their heads..they’re changing and ready for a change in society. I hope that its gonna happen.

I think all of the above. I think just as an evolution of thought, and of action, and what we do, and what we’re doing that we’re on the tip of something. I don’t know what that is, but I feel it in me and with a lot of other people. Hopefully its leading to something more positive than just existing at this point.

So if you could change anything about the world, what would it be?

Get rid of people. (Laughter)

What brings you happiness?

What brings me happiness...The thought of not searching for it.

What band would you choose to play at your funeral?

Do they have to be alive?

I don’t know why I think this, (laughs) but Johnny Cash is coming to my mind.

Hell yeah! The Man in Black keeps with your all black aesthetic!

Afterwards, Supra and 413 head honcho Angel Cabada took me into his photo studio/ workshop/ motorcycle garage and showed off his personal project Wax + Metal candles, a new kind of candle that fuses manly nuances with sophisticated fragrances while answering a barrage of my standard questions...

Favorite place you’ve ever been in the world?

I love Berlin and London. I’ve been going to the Glastonbury festival the last five years. I stay there for months when I go there.

Where haven’t you been that you want to see?

What drives you creatively?

Hmmm. So many things. I like motorcycles. I’m into Harley’s. Motorcycles make me feel great. Motorcylces for sure. Going fast. . I like to skateboard. Music wise, I used to be a Cars fanatic. Rick Ocasek was a favorite of mine. Lately I’ve been listening to a lot of Animals, 60’s rock, Ray Charles, Little Richard. I’m pretty easy when it comes to music -more an indie rock guy but I still love hip hop too. Been listening to a lot of Kanye as well. Furniture, art, clothing.. I’ve been a fan of Rick Owens for many years. I’m a fan of women’s stuff as well, like Isabel Marant. Super, super big fan of her stuff. Obviously, the stuff we do...

No doubt! I wear your shoes with Rick Owens.

I do the same- I like to mash it up with that too. (smiles) I tend to just go blank and roam with my own thought process. I try not to let too much stuff influence me.

So what brings you happiness?

Shit, that’s a good question- Being able to do what I want to do. Being free.

Your company is all about harnessing that freedom. What do you think your audience takes away from your products?

I just want them all to be happy. We’re always trying to bring something new and innovative. People seem pretty stoked on the stuff we make we always try to to push the envelope with our shoes. The Skytop IV is an example of that.

Best advice you’ve ever been given or can give?

Interview and photos by Chicago-born, LA-based writer and artist