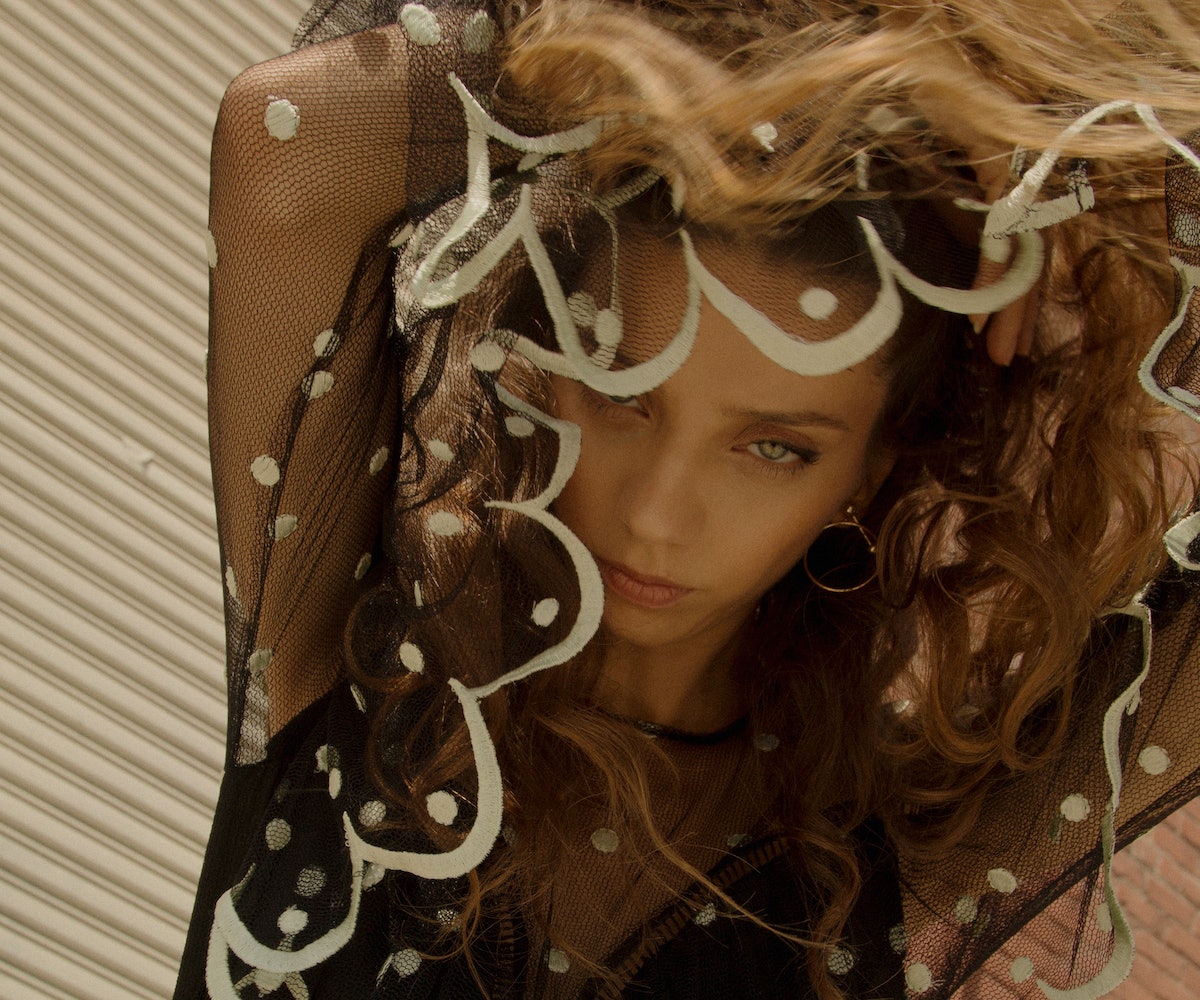 There is a leather-bound journal tucked under actress Angela Sarafyan’s arm when I meet her for coffee in downtown Los Angeles. Dressed in a whisper-thin, floor-length floral dress and sandals, with her hair in loose curls, she embodies that boho California spirit that’s been a thing since 1969. “This place is just absolutely beautiful,” she says when we sit down at the café, genuinely taken aback at the little slice of sunshine, floral arrangements, and pastry heaven in the middle of an otherwise construction-filled street.

Sarafyan has been living in Los Angeles since she was four, but was born in Yerevan, Armenia, in 1983. When she was three, her grandmother left for the States and Sarafyan’s parents followed shortly after. “My dad and mom both loved American culture—movies, cars, music. They were total hippies,” she says with a laugh. “My dad’s an actor and my mom’s a painter, so they were very ‘Whatever, dude! Get me to California now!’”

Growing up in L.A., she started performing early on, piano and ballet before acting. “I was a really, really weird kid,” she confesses. “I loved stories—like, I preferred them to reality. I think most kids like to live in their imagination, but that went on for a while. I liked to tell stories in front of my fourth grade class. I’d get emotional and cry and there’d be this huge drama, and then I’d go sit down and feel great!”

In 2000 Sarafyan scored her first high-profile role on the CBS drama Judging Amy. Since then, she’s been in more than 50 films and television shows, including Law & Order, Buffy the Vampire Slayer, The Immigrant, and -TheTwilight Saga: Breaking Dawn—Part 2.

When asked about the moment she decided to pursue acting, she says that it was never really a choice. “It’s a natural passion. I think people are so fascinating, how we all function and talk and move a different way.”

It’s a theme that will no doubt come up in Sarafyan’s latest role alongside Anthony Hopkins, Evan Rachel Wood, and James Marsden in HBO’s sci-fi thriller Westworld, about a futuristic theme park that turns deadly after its lifelike robots rebel against their human creators. Later this fall, Sarafyan will also appear in The Promise, opposite Oscar Isaac and Christian Bale. When asked about the latter, a love story set during the Armenian genocide, the actress’s eyes widen with excitement. “My agent found that script accidentally,” she says. “The minute I read it I felt like I was born to play the part.” The leather notebook, which she carries with her most places now, was a souvenir from filming. “I got it in this tiny village in Spain,” she says. “I like to write poetry and journal entries. I’ll write about my dreams. I realized that when I started writing my dreams down I began to see how they fit into my daily life. I don’t know what it means, but I think it’s really interesting.”

Favorite Quote: “‘Life is a dream’—this wonderful actor told me this and I’ve been obsessed with it ever since,” says Sarafyan. “It makes so much sense. This is our moment now, and when it’s over it will be a memory just like our dreams are. And it can be taken as, ‘Life can be anything you want it to be.’ It really resonated with me.”

Hometown: Yerevan, Armenia. “[Armenia] was really beautiful. There’s lots of flowers and fields of grass. I have very vivid memories of my grandma. When I was little, we used to take these long walks together in the moonlight. She would wear this beautiful long black coat and only burgundy lipstick and these cute little shoes.”

Occupation: On Westworld, Sarafyan plays an android programmed to be a prostitute. “She’s this feminine creature,” Sarafyan says. “She embodies innocence. She’s the ultimate woman that men come to see. The way she sees the world, I believe she falls in love with people regardless of whether or not they want her, and that was the part I connected with.”

Song: John Lennon’s “Love.” “It’s a short song that he wrote for his wife and I just love it.”

Zodiac Sign: Cancer. “I’m a water sign, so we’re sensitive, intuitive, and we can get very emotional,” she says. “We’re also very loyal. If we love someone we love them and that’s it.”