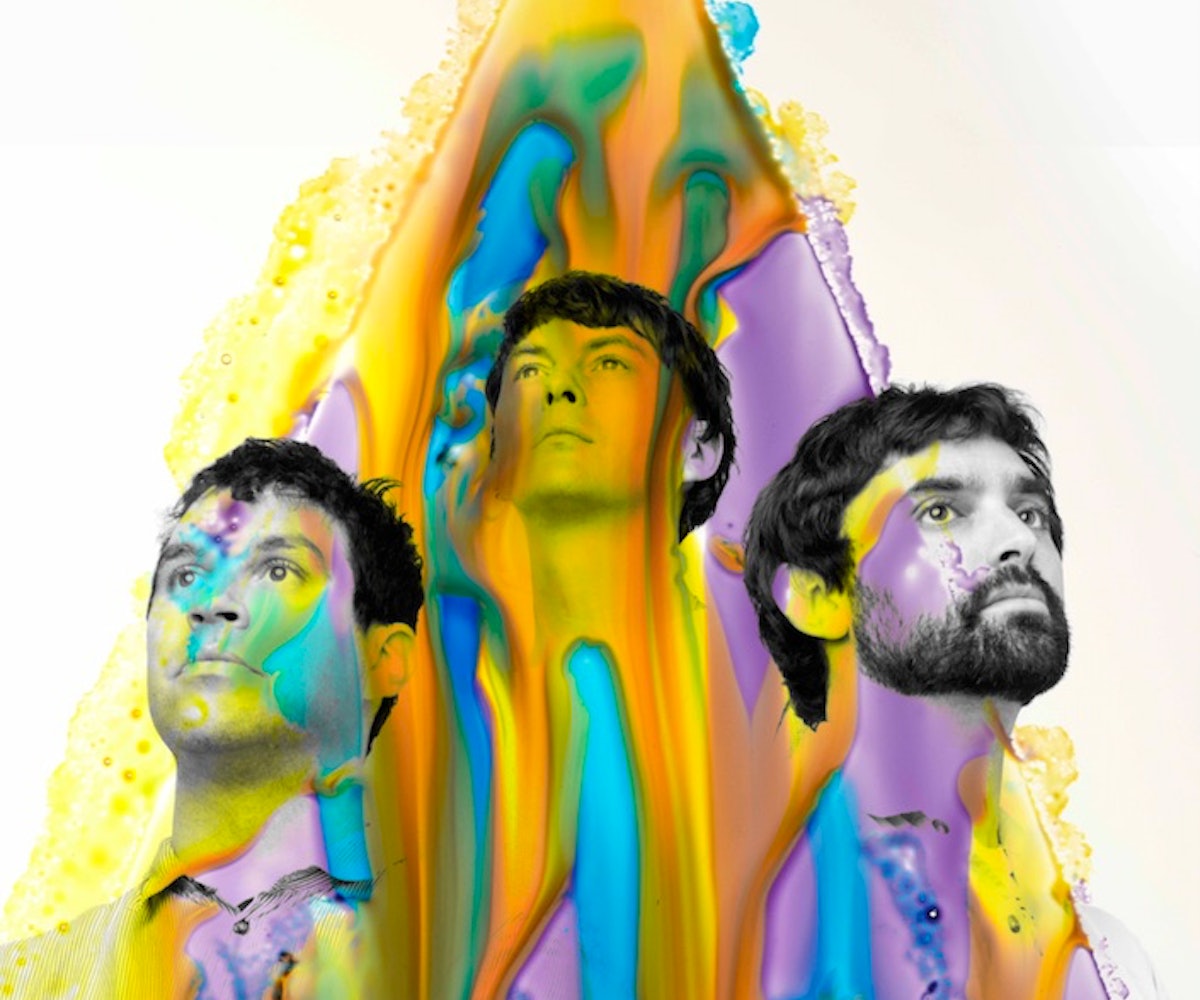 With a band as unconventional as Animal Collective, the weirdest thing you can do is go pop. After almost twenty years playing their left field brand of electronic experimentalism, the polymorphous four-piece is shocking fans with something surprisingly conventional: a twelve-track album, largely filled with three-to-four minute pop songs. In a way, Painting With (out now) is the most experimental thing they’ve done, drawing on the cut-and-paste theory of Dadaism to create a sample-heavy, maximalist opus. We caught up with band members Avey Tare (Dave Portner), Panda Bear (Noah Lennox), and Geologist (Brian Weitz) to discuss the process behind their most unexpected record yet.

You guys have been working on various solo projects since Centipede Hz. Why make another Animal Collective album?

AT: It was just a bit of a break. We’ll put out a record and do a lot of touring for the record, before and after the record comes, so we know when it’s time to chill out for a minute and stop doing the Animal Collective thing. For Noah and I, we often work on another musical thing we have in mind; for Brian it’s other stuff and for Josh [Dibb, aka Deakin] it’s other stuff.

Do you feel like you gain new skills and insight in your solo work that you then bring to Animal Collective?

AT: It’s that, and with the Animal Collective you learn stuff you bring into the solo [work]. They both weave in and out of each other.

G: The whole original idea or philosophy we had behind Animal Collective was it being just us liking to do all these different kinds of projects, records, and songs. If Brian and I have a weird idea for a split 12,” we’ll just go do it. We’re always getting new gear, so that’s a good way to learn stuff and experiment.

On Painting With, you’ve replaced  the drones and ambient sounds of your past records with catchy melodies. Why go pop?

AT: Newness. For the most part, a lot of our records have had slower, sadder, more ambient parts, and I think we weren’t in the mood for that. We felt like the kind of record we wanted to make wouldn’t have felt cohesive with those elements.

Such an unabashedly fun album must have been a blast to record.

G: We did a lot of work in Asheville [North Carolina] first. A friend of mine has a studio in his basement that he lets local bands rehearse in, so we had some super good times orchestrating the songs there.

PB: We recorded in a studio in Los Angeles called EastWest that was really cleverly and carefully designed for sound, so everything sounded so good in there and it was fun to try so much stuff out.

The record has a distinctly modern art theme, from promotional photos to titling the lead single “FloriDada.” What drew you to that concept?

AT: There are often little cues, words, images that we start talking about before we start making music. Because we’re such visual people it’s how we often communicate about the music. Once we started jamming and making music, it brought to mind a collagey sort of aspect of piecing songs and piecing together a record, alluding to the Dadaist collages. We liked the idea of taking something familiar and using it in a different way, like some of the samples we used or some of the chord structures. All of it is a different perspective on songwriting and song forms to us. I showed the guys what [visual artist and Gang Gang Dance keyboardist] Brian DeGraw had been up to, and that seemed to fit perfectly with what we were doing, so that’s how we got the artwork.

You mentioned sampling and collaging, but I’d love to know more about how Dada affected the way you created the music.

AT: I guess because we have been sampling for many years now and we’ve been inspired by audio collages and musique concrète, it was just a matter of finding a different way into it. We wanted to use it a little more blatantly.

G: We’ve used a lot of samples and collage elements in the past but they usually made these heady, ambient beds of things. Thinking about it with Dadaism, you just rip something and paste it in there, whether it’s a sample or a sound we made.

PB: I think there’s an analogy too with how Cubism is a distorted image of reality. With a lot of the forms and structures of the songs, it’s a distorted version of a traditional structure. A lot of these songs have the paradigms of pop structures but in confused or rearranged ways.

You’ve existed as a band since the ‘90s, but it’s likely that some people will be discovering you for the first time through this record. Do you think it’s a good entry point to the AnCo discography?

AT: I feel like any record could be. Not to alienate anybody in particular or get anybody specific on board, I think it’s just cool that each record offers different things to different people.

PB: I’ve been thinking a lot about how the past colors [make] the present as a band. It’s been interesting to hear how many records of ours this record reminds them of.

G: People say this record brings together everything we’ve done in a different way or something, but people said that about Merriweather Post Pavilion, too.

AT: It makes [us] proud of our past that those moments were singular enough or personal enough to what we wanted to express. That when people say this record has reference points, the reference points are just other versions of ourselves.