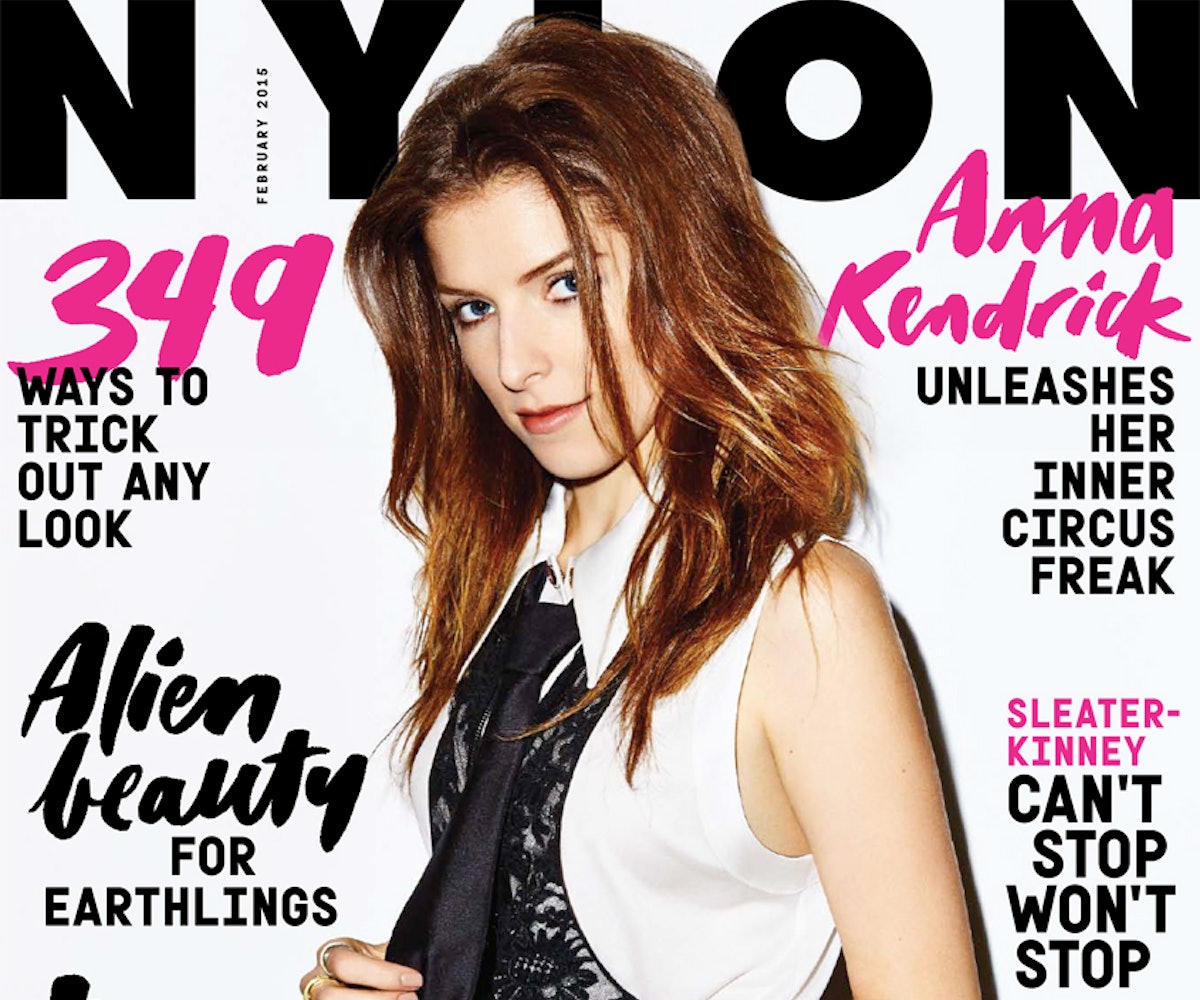 Anna Kendrick is our newest cover star—which means NYLON's February 2015 issue is filled with that off-the-cuff, no-censor-button commentary that we've all come to love from her. "I don't give a f*k," she tells us, regarding her endearingly genuine social media presence. "Twitter is only 140 characters. There's really not that much that I could reveal, then regret later." Lucky for us (and our readers!), she brought that same authenticity to our interview, revealing personal things about dating, confidence, and that time she tweeted: "Ugh - NEVER going to a Ryan Gosling movie in a theater again. Apparently masturbating in the back row is still considered ‘inappropriate.'"

Speaking of that infamous tweet, she tells us, “Thank God I’ve never been in a room with him! I don’t feel embarrassed, though. I’m sure he has a sense of humor. But I’d probably feel like I’d have to address [the tweet], and I’d end up saying something to make it much, much worse.”

Here's what else to look forward to in our cover story:

On dating: “The great torture from my teen years into my mid-20s was trying to get attention from guys who were not interested in me—like, at all. So I’m happy that now my type is a nice guy who likes me back."

On how to get her to like you: "Sometimes I meet people who are too confident. I’m like, ‘I don’t even like being around you. You’re boring. Get a neurosis, and then we’ll talk."

On body image: "I was a very late bloomer. I was the smallest in my class, always telling msyelf, 'I'm never getting boobs!' I remember being comforted by hearing that guys like small boobs and big boobs. They like any boobs! At the time I was like, 'That is excellent news!'"

On that time she got a Twitter shout-out from Jemima Kirke: "I've never met Jemima, and I hope to never meet her because she's so cool, and for one moment she thought that I was cool, and I don't want to blow it. But I hope I don't ever get the feeling that I'm the cool girl. I think self-doubt is healthy. It pushes you, and humbles you, and I would really hate to be one of the three people in the fucking universe who are actually well-rounded, because then you can't relate to anybody else's inner shit."

Aubrey Plaza, Kendrick’s BFF, tells NYLON that Anna is “the weirdest combo of impulsive tequila-drinking party girl and 80-year-old senator’s wife from Vermont,” adding, “She loves Lord of the Rings and Game of Thrones, can rap ‘99 Problems’ from start to finish, scarfs down burgers in six-inch Louboutins, while beating you at Assassin’s Creed. But guys are probably afraid to hit on her because she’s intimidating.”