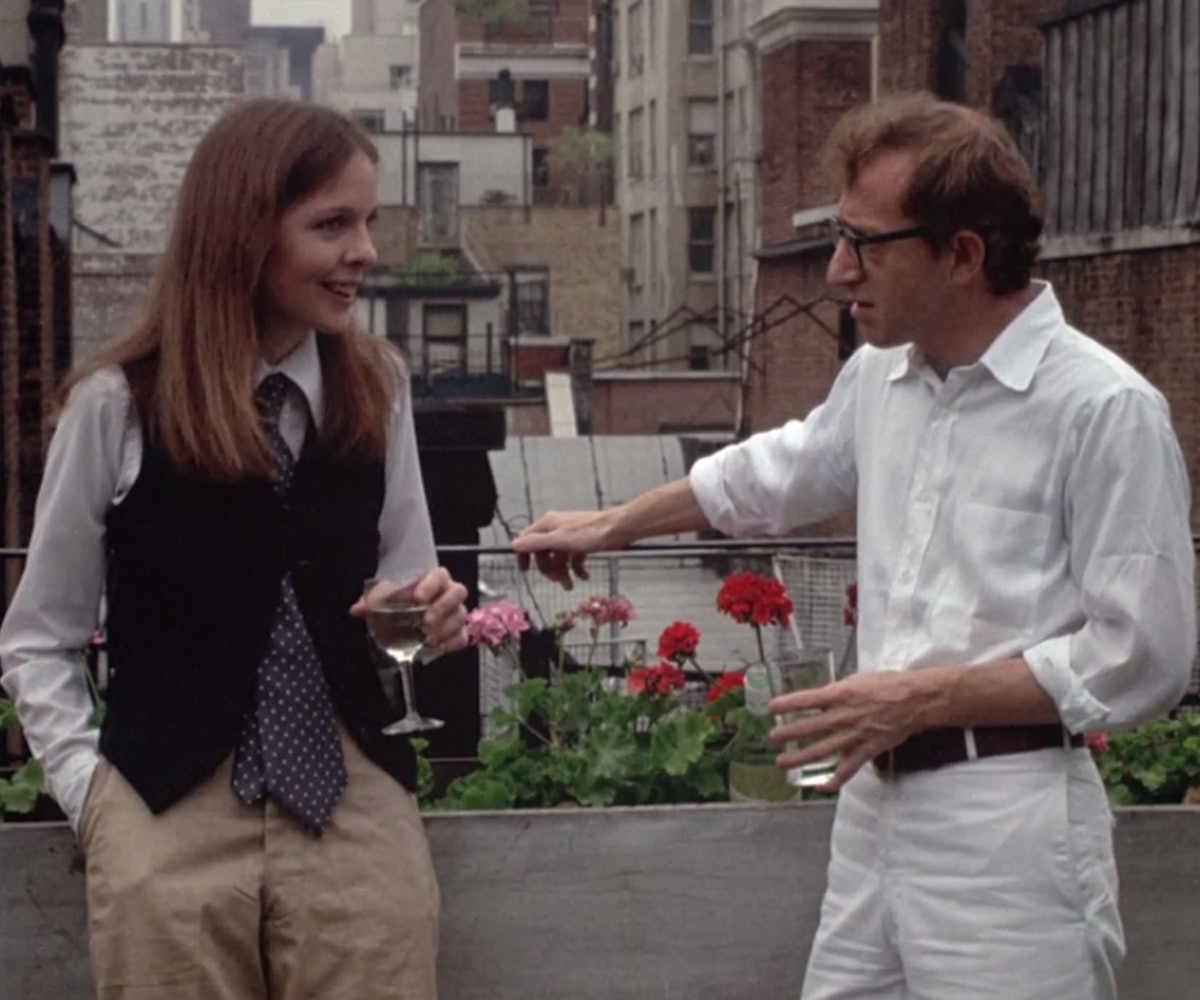 There’s no better nudge than a beloved film’s 40th anniversary to force a girl to become cultured. That anyway, is how I recently wound up watching Annie Hall, after hearing about what a can't-miss classic it was for years and years.

A big reason why I don’t seek out older films in general (see also: Malcolm X, Breakfast at Tiffany's, Purple Rain) is because I assume I can’t relate to them. They’re not of this time, therefore they’re not relevant to my life. Annie Hall completely thwarted this jaded assumption. Sure, there were a couple of references that flew over my head, but the subject matter is timeless: love lost.

Everyone probably knows the story by now: Neurotic Alvy Stringer (Woody Allen) and scatterbrained Annie Hall (Diane Keaton) meet in New York City and fall in and then out of love. What stands out is the way in which their relationship is pieced together throughout the film; it jumps from the first date to the first fight to the first time they say I love you to their eventual disintegration. It highlights the bits and pieces of a relationship that you remember when you think back on what it is you once had with someone. Or, what and where went wrong.

More than that, though, and the part I really related to, is that it’s about a woman forming a sense of self. Allen is a comedic force throughout the film, but it's Keaton who is the standout. I can’t help but return to the scene of Annie and Alvy’s first isolated interaction, in which Keaton’s performance is so pure, honest, and true. There’s hesitation, there’s stuttering, there’s a lot of awkwardness involved. It’s exactly how an interaction of its kind pans out; it’s almost hard to watch, it's so familiar.

Beyond Keaton's stellar performance, I had a lot of thoughts about the film that I managed to jot down, maybe in hopes that my friend who’s been begging me to watch the film for years would be able to address them. They include but aren’t limited to:

Why do guys always automatically assume women are on their periods when they’re snippy?

Was this before the time of movie previews? Two minutes is nothing.

Am I as charming as Annie is when she’s a nervous wreck? Eh, probably not.

“I have to sing tomorrow” is the lamest excuse to get out of having sex.

He’s not wrong about the country being creepy.

Annie's also not wrong about New York: What is so great about it?

Is this why classics are dubbed classics, because they stand the test of time and all that?

Does this mean I should watch The Godfather next, or what?

So maybe my friend will answer these burning questions. Or maybe I'll just have to watch Annie Hall again, if only for the fashion inspo.