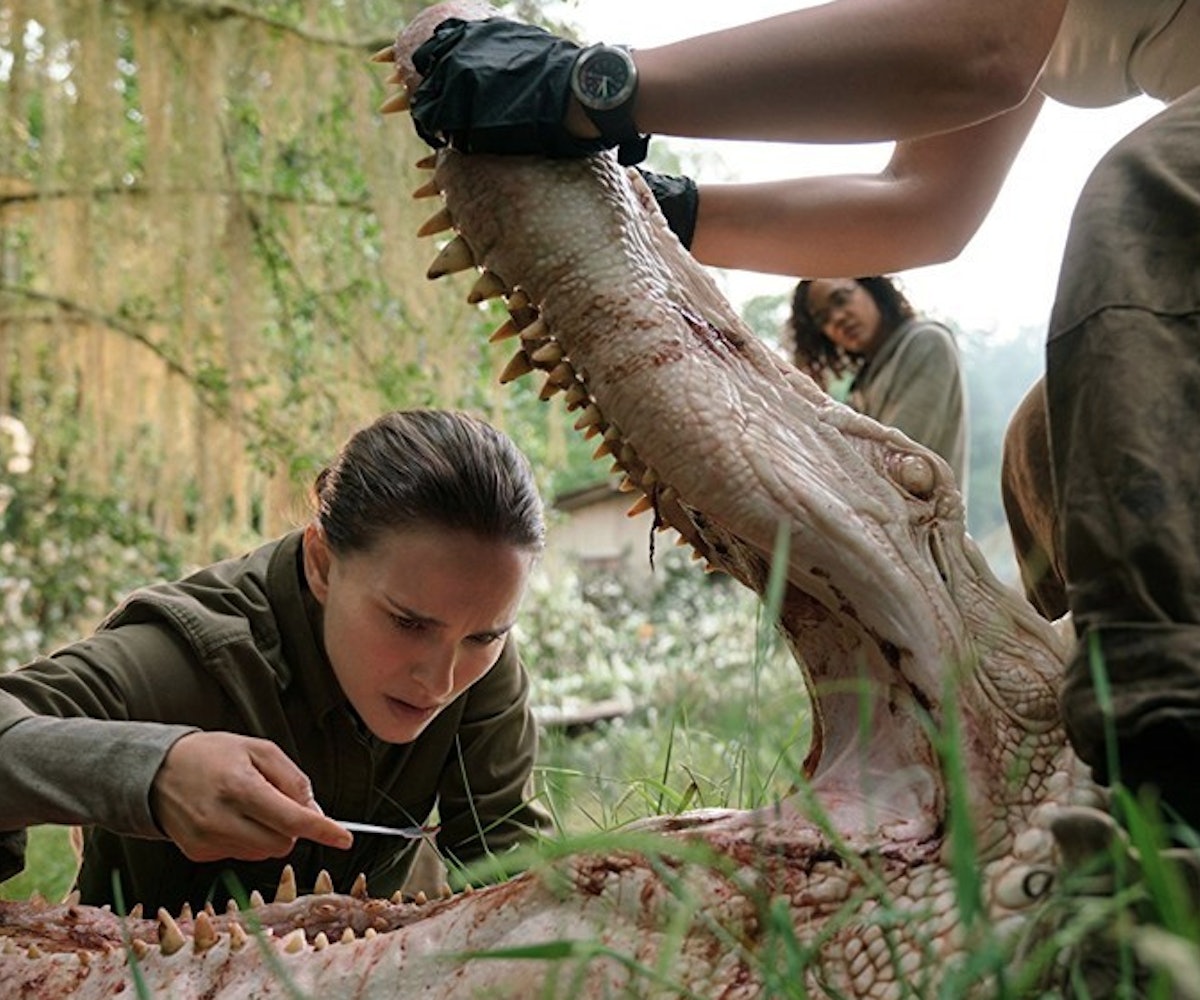 It’s absolutely a hack move to describe a movie as “[x] meets [y]” in the opening line of a review, but Annihilation is a movie about hybridization, so here goes: Annihilation is Picnic at Hanging Rock meets Predator. As in Picnic at Hanging Rock, an all-female group outing into the wild is confronted with mysterious vanishings, as well as the natural world in all its frightening, ravishing uncanniness. As in Predator, a heavily armed expedition into a rainforest is confronted with an alien-to-them adversary, who picks them off one by one. In adapting (mutating?) Jeff VanderMeer’s novel, the first of a trilogy, Annihilation writer-director Alex Garland crossbreeds genres—some heady sci-fi, some jump-scares, some body-horror—and selects elements of the book grouped around metaphors of invasive species and recombinant DNA.

The film largely takes place within an uninhabited region that’s been contaminated by some freak event, enclosed within a border—“The Shimmer,” a sort of soap bubble membrane that’s slowly expanding, and has swallowed up several previous suicide-mission expeditions before the one joined, at the last minute, by Natalie Portman’s biologist Lena.

VanderMeer’s Area X features prose descriptions of many things easier to imagine than to actually visualize; the film creates a terrarium of mismatched ecosystems, lush and almost too alive with textures—if you faked sick on dissection days in biology class, know that Annihilation is wet, soft, and scaly. A rainbow haze hangs in the humid air, coral-like formations and molds spread out in fluorescent arrays, and bursts of flowers reclaim the world-without-us landscape. Or are they claiming it for the first time? The expedition quickly notices that the flora and fauna of Area X are impossible, featuring freak genetic hybrids. (Even the score, by Ben Salisbury and Portishead’s Geoff Barrow, is a hybrid, mixing musique concrete, Deliverance-style ominous backwoods twang, and rapturous cello distorted through fart-y subwoofers.) Overgrown and almost personified, Area X has an eeriness that foreshadows the terrifying portmanteau beasts lurking in the shadows, and the gruesome final messages left behind by previous expeditions.

Where VanderMeer’s Annihilation leaves plenty of loose ends and unfathomable secrets, Garland retains a WTF flavor despite elaborating a more self-contained story, thanks to a climax set inside and below a lighthouse. He mashes up the symbolism of tower and tunnel, and dares the ridiculous with a sequence a bit like an Augmented Reality exhibition and a bit interpretive dance performance, and proposes the next stage in the evolution of all things—not least the normal-brain-glowing-brain-galaxy-brain meme.

Portman, who became a movie star at age 13, presumably knows a thing or two about the potentially warping, isolating effects of a talent pursued with intensity. Her unworldly, anorexic ballerina in Black Swan is a hard performance to shake, and elevates a movie that’s otherwise kitschier than most figure skating routines. Annihilation’s biologist, as written by VanderMeer, could be the ballerina’s sister, in the STEM fields instead of the arts, another savant-like woman emotionally closed off to everything but her work—including the husband who left her to join a previous expedition into Area X. Garland doesn’t write VanderMeer’s “Ghost Bird” as nearly so frosty to the touch—Portman’s character here is mostly grieving. (We do, however, get a gender-flipped version of the action-movie trope of the lonely adventurer haunted by flashbacks of a lost paradise of endless days in bed, with Oscar Isaac in full Internet’s Boyfriend mode as the cuddle buddy.) As the expedition’s leader, the psychologist Dr. Ventress, Jennifer Jason Leigh comes closer to Ghost Bird’s freaky determination. Fresh off her Cheetos-scarfing hitwoman in Twin Peaks: The Return, Leigh again conveys sociopathy by keeping an even keel and eyes on the prize amid circumstances that are, objectively, incredibly disturbing.

Shortly before its release, Annihilation was the subject of a whitewashing controversy. In the second book of VanderMeer’s trilogy, Portman’s biologist character is described as Asian-American and Leigh’s psychologist as part Native American. In mitigation, Garland has offered that he only worked off of the first book, in which VanderMeer offers no identifying characteristics for any of the characters on the expedition: They’re known only by their roles, as “the biologist,” “the psychologist,” et cetera, and pointedly stripped of any identifying details, with the important exception of the biologist’s own memories—she’s the narrator. When another character in Authority, the second book, takes note of the biologist’s ethnicity, it feels like the “colorblind casting” of Annihilation, like VanderMeer is putting a face onto a character that, as originally written, could look like anyone. (I say this with the necessary caveat that if anyone wants to make the case for why the narrator of Annihilation feels specifically written as Asian-American, not just potentially Asian-American, I’m all ears.) Garland’s film attempts to follow Authority in imagining Annihilation’s ensemble as diverse; filling out the expedition are Tessa Thompson, Gina Rodriguez, and the Swede Tuva Novotny (each doing excellent ensemble character-acting work, suggesting the contours of a largely absent backstories like the platoon members in a war movie). All of which is to say that,  absolutely, the lack of Asian representation within the expedition speaks to a larger structural issue: Even despite its best intentions, Annihilation is inevitably part of a sadistic game of musical chairs in which women and minorities scrap for too few opportunities.

Within Area X, sisterhood is likewise a luxury: Fear spawns mistrust, and women are pitted against each other no less than in the Hollywood that botched Annihilation’s release. (An executive unsuccessfully lobbied to dumb the film down—most Hollywood decision-makers still think that all paying movie-goers are exactly like them, only stupider—and a spooked Paramount sold off most overseas rights to Netflix. The studio kept a tight lid on the film only to push up the review embargo this week at the last minute, after at last figuring out that a stylish, female-centric, passionately made film might possibly attract some vocal fans, as it’s now doing.) The movie shows group dynamics breaking down on under the pressure of conflicting goals and individual survival instincts—they’re only human, after all.

And so I, for one welcome the final shots of Annihilation, which touch on the relationship between memory and the self, and the question of what it means to share your life with the person you love; and more generally pay off the film’s themes of identities scrambled and recombined into something post-human. It’s tempting to see Annihilation as, finally, hopeful—as one of two works released this week to promise that the future will be fluid, borderless, and wrap Thompson in its next-level embrace.