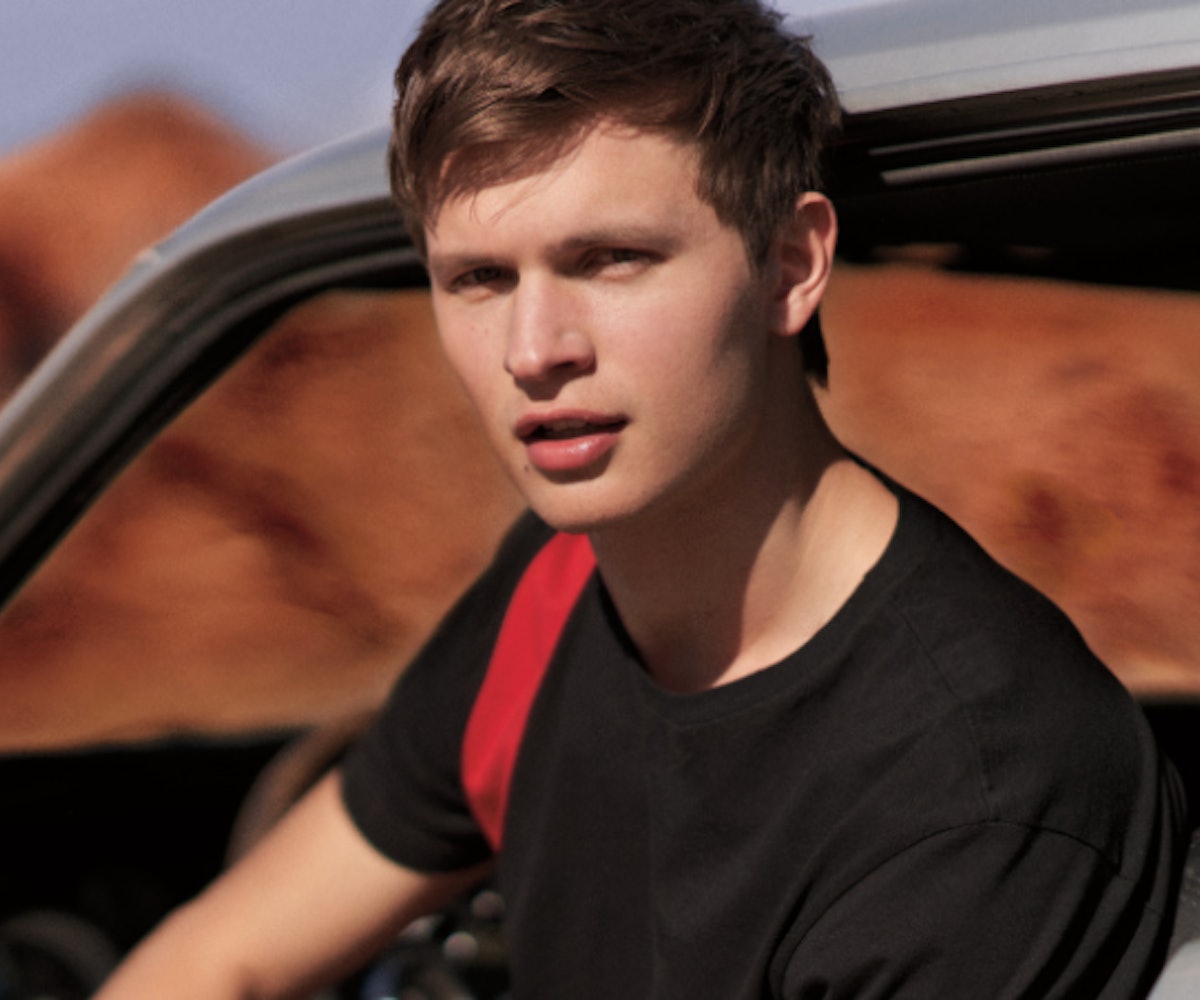 Ansel Elgort is probably one of the most open and earnest stars working in Hollywood today. And that's no surprise, given how in-demand he's been ever since shooting to fame in a slew of hit films, including Divergent, Baby Driver, and The Fault in Our Stars. But with his aura of relentless positivity and notoriously goofy sense of humor, Elgort also isn't your typical enfant terrible.

And perhaps that's what makes him the perfect global ambassador for Ralph Lauren's iconic Polo Red fragrance line, as well as the face of their brand new cologne, Polo Red Rush: He's as exuberant, outgoing, and undeniably fun as the scent itself, which was concocted by master perfumer Olivier Gillotin and is inspired by the adrenaline thrill of racing. So, obviously, who better than Baby Driver himself to rep the brand?

A man of many talents, Elgort is not only a Golden Globe-nominee, with big projects like The Goldfinch in the pipeline, but is also an accomplished skateboarder, singer, and DJ. Tapping into his polymathic tendencies, Elgort helped conceive, star, and provide the soundtrack for the new Polo Red commercial—turning it into an apt tribute to Gillotin's love of speed, and the perfect visual encapsulation of the fragrance's youthful vibe.

Ahead of the fragrance's launch, we sat down with Elgort to talk about everything from his career as DJ Ansolo to his love of his hometown, New York City, to (of course) becoming the face of a brand as legendary as Ralph Lauren. Read our Q&A, below.

So, let's talk a little bit about Ralph Lauren, since that's why we're here. What do you love about the brand?

It's an iconic brand, and Ralph, the guy, is a household name. He has built such a big empire. And the aesthetic behind the brand really is something—like, I've always liked wearing Ralph Lauren.

Just not on the subway?

Does the hat have to be Ralph Lauren?

Or a Knicks hat.

Let’s talk about Polo Red and Polo Red Rush though. What do you love about it?

I like the way the bottle looks. That's important. It's hard though to describe why you like a scent. It just smells good. But cologne is strong, and I don’t wear it every day. I would wear that one in a suit, dressed up.

Are there any scents you find yourself really resonating with?

Every kind. I love all scents, almost.

Here's the thing about New York City: You get a lot of scents, because the air always smells different depending on the seasons, and the seasons are always changing.

That's true, but Chinatown scent? Not exactly [my favorite].

I mean, who does?

I don't like the Midtown smell. But everywhere else is cool. I don't mind the Hell's Kitchen smell. I don't love it, but I don't mind it. The Brooklyn smell I love. It smells like water.

You do strike me as, like, a Brooklyn Heights kind of guy.

That's so insulting. I don't have a baby.

Okay now, back to the scent—in your opinion, what is the power behind it?

Who is the Polo Red Rush wearer? How would you describe him?

The Polo Red wearer cannot be put in a box. So, I can't describe him. But I think youthful, outgoing, energetic, good energy.

So, someone not in Midtown?

Exactly. Someone in Bed-Stuy.

Switching gears, you’re known as one of the most open, approachable celebrities, and a lot of people attribute that to your social media presence. What are your thoughts on that?

I think it's interesting, because I think I'm somewhat transparent. But I also don't share that much negativity. There are times where I can be negative, but I don't want to burden my fans with that kind of negativity. It already is in my music. I just hate negativity on social media. There's so much negativity on Twitter, and rants...

Sometimes, it's important stuff though.

You're right. Like, I was very negative about Trump and stuff. I went HAM on that, and I didn't mind. But negativity, in general… There's a lot of people on social media who are constantly negative, and I just didn't want to be that way. But there is definitely some negativity in my music.

Just personal stuff. I think the thing about music is you're more open to say stuff. I feel like you can say stuff in music, and it doesn't as often get quoted and taken out of context. [At least, not in] the same way as you saying something on social media or in an interview.

The thing with music though is that it can be so easily misinterpreted. Is it intimidating to know that whatever you’re laying out on the table via your music could be misconstrued by those listening to it?

I feel we can't… [really express ourselves] right now, even though we have freedom of speech in this country. Technically. We actually kind of don't, because you can get really ostracized for saying certain things. Luckily, art is the one place where people can speak really freely and say whatever they want to say, and I would never be afraid to say anything in art. I would never be afraid to play any kind of character in a movie. I don't care, even if I was ever ostracized for saying something in a song or singing something, because someone is wrong for judging what someone is trying to say in art. Art is the one place that we have the freedom to do whatever. And Twitter, to me, is not. Twitter, I think, you're asking people to judge your work. Social media is a place of judgment. I think music and art are not.

People who judge music and art in such a critical way… I don't like that. There are certain times where you can be like, "Yo, this person could have done better, blah, blah, blah."

But if the critique was based in something like... Say you’re an aspiring house DJ. You’re still operating on the confines of a well-respected, well-established genre that was helmed and pioneered by marginalized identities. There’s a legacy there and story that’s so much deeper, and, in my opinion, you should be paying respect.

No, I agree with that. I think that I've definitely been like, "Yo, this DJ fucking sucks and this is ruining the night." So I do agree with that. I also think that when I was 14 years old and I was in creative writing class, and I was writing something, the teacher told me it made no sense. That's why I got a C on it—because my creative writing made no sense. Then I started writing a certain way and trying to make my stuff make more sense. That's bullshit. Now that I'm older, I'm not getting a grade. But [in a way], I still am, because you're still getting everyone's judgment telling you that your stuff is good or bad and, at the end of the day, it's going to be creative.

Everyone says as an actor, “Do not read your reviews.” It's a big rule of acting. Big. If you're on stage, maybe. But in movies, it doesn't matter because you're done. The movie is already out and you already did your performance, it's done.

Will it affect your [future] performances?

Yeah. You're reading what people are saying about what they don't like or like about your performance. Doesn't matter. It's just one person's opinion. You might have a great palate, but your opinion doesn't... Like that movie Jonathan came out, people were sending me reviews. And I honestly wasn't even interested in reading them. I could care less. I don't care what people think about the movie that I was in.

But what about something constructive?

I mean, it's already out. But if the director came over to me and was like, "Ansel, you could’ve done better,” that’s the only person I’d listen to. Because it's their vision, you know?