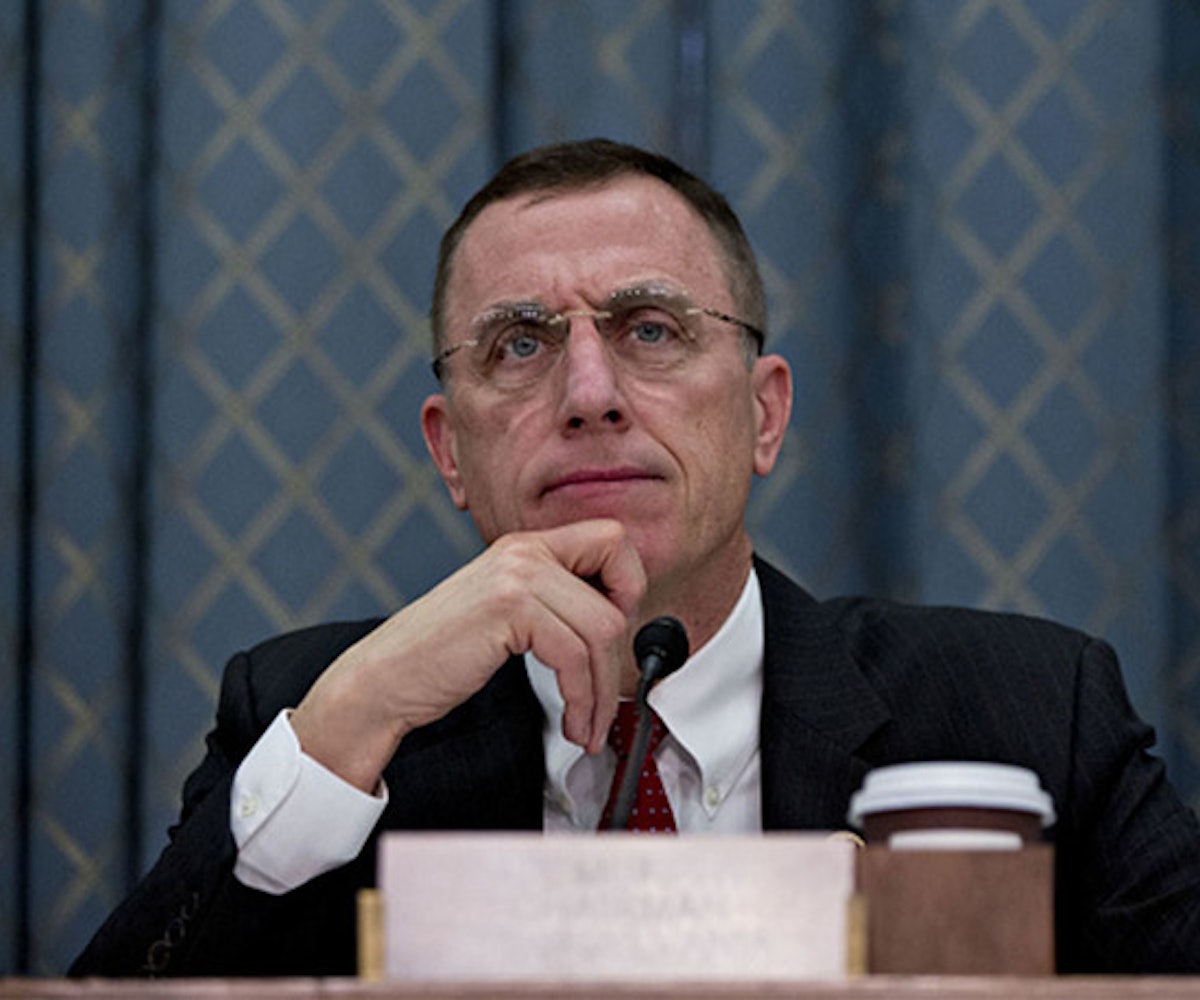 Anti-abortion congressman, representative Tim Murphy, is the latest GOP lawmaker to be called out for publicly espousing anti-abortion views, while privately asking his girlfriend to get one. In recently revealed texts, Murphy reportedly encouraged the woman he was cheating on his wife with to get an abortion when the two unexpectedly discovered they were pregnant, the Pittsburgh Post-Gazette reports.

Murphy, who admitted in September to having an affair with forensic psychologist Shannon Edwards, has been recognized by the anti-abortion group Family Research Council for his long history of voting against abortion access. He's a member of the House Pro-Life Caucus and has also been endorsed by the anti-abortion group LifePAC as well. The secretary of LifePAC, Mary Lou Gartner, refused to criticize the congressman in the wake of the controversy, telling CNN, "I'm not ready to cast a stone at him."

In January 2017, according to the messages obtained by the Post-Gazette, Edwards alluded in her texts to Murphy that he'd asked her to get an abortion. "And you have zero issue posting your pro-life stance all over the place when you had no issue asking me to abort our unborn child just last week when we thought that was one of the options," she wrote. A text from Murphy's phone number responded, "I get what you say about my March for life messages. I've never written them. Staff does them. I read them and winced. I told staff don't write any more. I will."

Edwards texted Murphy after seeing a post about late-term abortions on the lawmaker's official Facebook page. "The United States is one of just seven countries worldwide that permits elective abortion more than halfway through pregnancy (beyond 20 weeks)," it read. "It is a tragic shame that America is leading the world in discarding and disregarding the most vulnerable." Also in the post, Murphy mentioned that he sponsored and voted for a bill banning the use of federal funds for abortions, adding that he hopes "we will once again be a nation committed to honoring life from the moment of conception and ensuring American taxpayer dollars are never spent to end a life before it even begins."

Of course, this isn't the first time an anti-abortion politician has been called out for asking his girlfriend to get an abortion. In 2015, it was discovered that Tennessee representative Scott DesJarlais supported his ex-wife's two abortions, in addition to pressuring his 24-year-old girlfriend into having an abortion once she told him she was pregnant with his child. Both of these men currently support the 20-week abortion ban that just passed the House. The "Pain-Capable Unborn Child Protection Act" would penalize any doctors for performing or attempting to perform an abortion after 20 weeks. If caught violating the law, they'd face a fine, up to five years in prison, or both.

This is further proof that abortion laws are more about controlling women's bodies than anything else. Murphy and DesJarlais are only concerned with the well-being of the fetus when it comes to their political agenda, not their personal lives. They understand why a woman would need safe and affordable access to abortions, they just can't own up to that publicly for fear of losing their conservative, right-wing base.