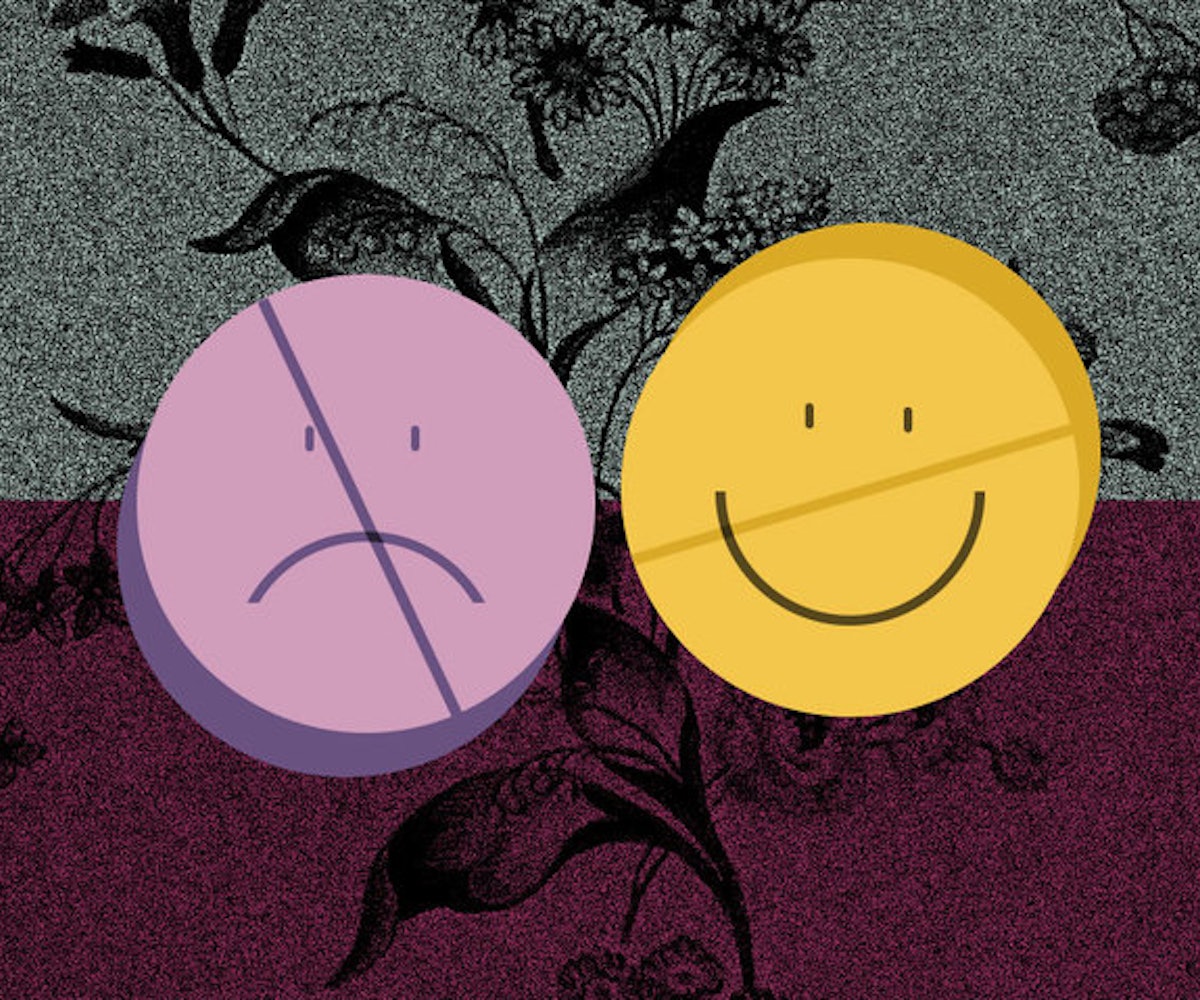 I was depressed for a little over a decade before I sought treatment. It took a broken heart—a real broken heart—to lose my desire to do pretty much anything other than go through the motions after I'd pulled myself out of bed. I was a junior in college.

Up until my breaking point, I had grown accustomed to sadness, anger, and worry. The heaviness I felt and the overall sense of being "over it," often before anything began, was my norm. I knew it wasn't normal, per se, but I was doing really well and excelling. I appeared fine—fabulous, even—but I knew that at any moment, something or someone could send me reeling.

Pride is my hamartia and failure is my worst fear. They're a bold cocktail when mixed together, turning you into your own worst enemy and critic. Talking about my depression and seeking help was failure in my eyes. I knew I couldn't shake off whatever down feeling I experienced, so I worked on managing to live with it.

We all know what happens after we internalize enough emotions, right? Nothing good. Eventually, and luckily, I found a psychologist through my university's wellness center, walked my ass up to see them, and described my history of depressive moments and suicidal thoughts, soon enough leaving with a prescription which I filled en route to class.

Wellbutrin (bupropion) is an interesting drug. Consistency, I've learned, is the key to seeing any results with antidepressants. Although a lot of people say antidepressants numb them, that's not how the drugs function; they really just level you out and work to keep you from slipping too far into the sad. The rest, like happiness and all that fun stuff, is up to you to find and make. Sometimes, though, one drug may not work as well as another for you, or even two combined.

"Often 'works' means reduced, rather than eliminated, symptoms," Omar Manejwala, M.D., of Catasys, says. With that in mind, Dr. Manejwala advises trying multiple forms of treatment before settling on one. This is a tip I didn't know until recently because (a) my pride (hi, again) told me one drug was enough and (b) I just don't like going to the doctor's office. But guess what? Turns out going to the doctor actually helps, especially when you're open and honest about how you're really feeling. Crazy! Now, with two prescriptions—Wellbutrin and a new SSRI (selective serotonin reuptake inhibitors)—that heaviness doesn't just feel neutralized, but a little lifted.

"Again," author and doctor Scott Carroll says, "Antidepressants only work when you take them. They do not cure anything."

Antidepressants are building blocks. They're the foundation for many depressed people's efforts to manage the disease. Both doctors Carroll and Manejwala speak highly of therapy as a complementary means of treatment. It's a safe outlet to talk about your feelings with an objective person. But it's also important to involve people in your regular life with your recovery because your friends often play a major role in treating depression. "People suffering from depression or anxiety need to make an extra effort get out and socialize," Dr. Will Courtenay tells me as "social support is strongly linked with improved mental health and decreased stress." From there, antidepressants can be seen as platforms for positive thinking rather than a crutch. You do not rely on antidepressants, you use them proactively.

Dr. Manejwala says, "Depression is a treatable condition, but sadly, the vast majority of people with depression will not get help because of shame, stigma, not having access to treatment, not getting the right treatment, not believing that they have a condition or a sense of hopelessness that is often a symptom of the disease itself. But with the right help and support, most people with depression can recover and live happy, productive lives." Step one is, of course, accepting you're depressed. It gets better from there. I promise. And no, that's not just my pills talking.