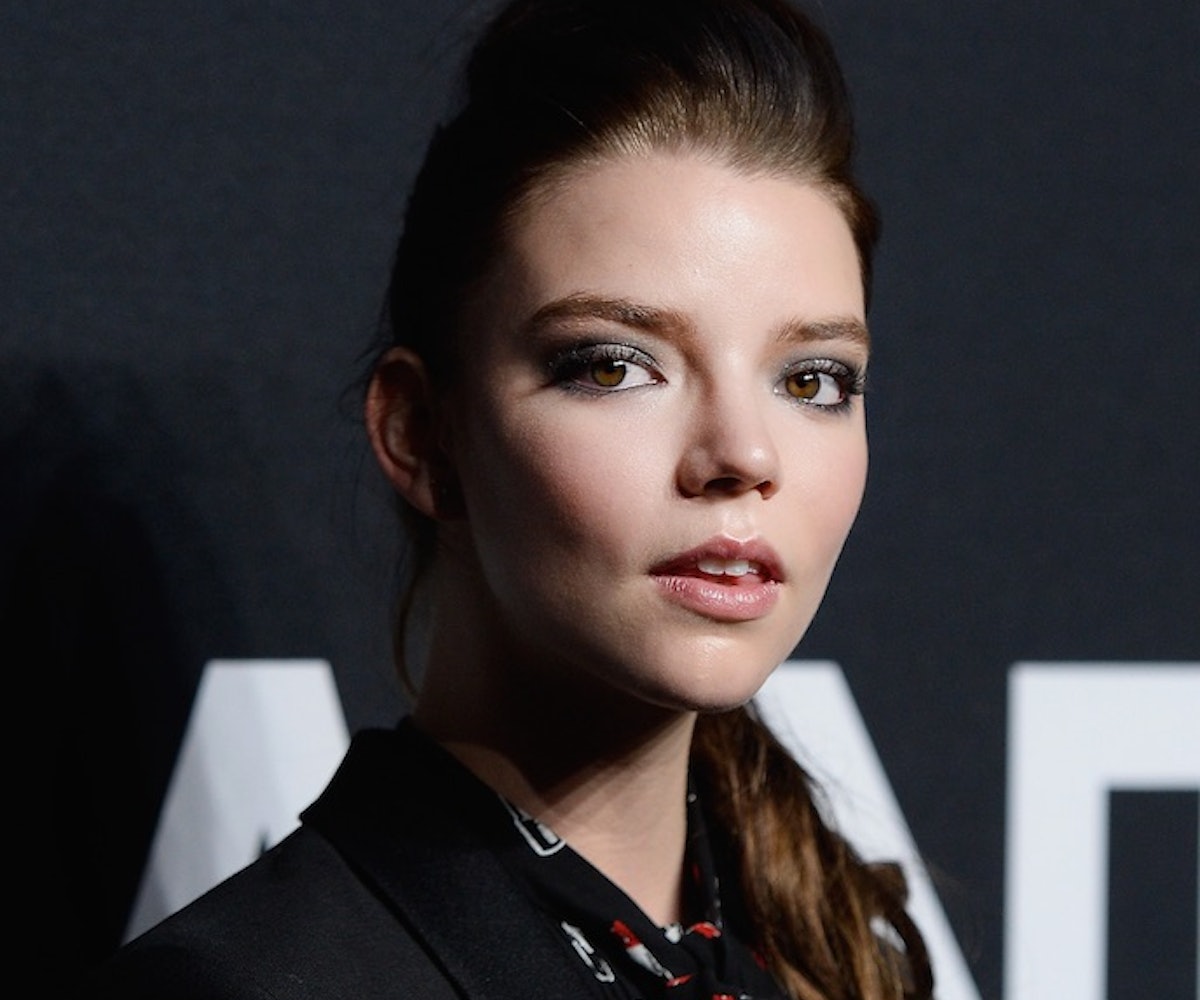 It's been more than a year since the period horror movie The Witch caused a small frenzy at the Sundance Film Festival. What the public will discover this weekend, when the film finally gets released, is what Hollywood has known for a while: The movie's young lead, Anya Taylor-Joy, is a star in the making. Taylor-Joy, who was born in Argentina and raised in the U.K., plays the eldest daughter in a family that may or may not be falling victim to acts of witchcraft. The movie's setting—it takes place in New England circa the 1630s—might put off audiences who like their horror with a side of smartphone, but rest assured that the film by first-time director Robert Eggers is one of the scariest of the year. As for the 19-year-old Taylor-Joy, she's spent the last year shooting M. Night Shyamalan's latest spookfest, starring in the sci-fi thriller Morgan, and appearing in "rising star" features in numerous magazines. We caught up with Taylor-Joy earlier this week to find out how she's coping with her duties as a budding movie star.

I’ve been talking since about eight o’clock this morning and I haven’t really stopped so my brain’s a bit of a cosmic whirlwind mushball at the moment.

Oh no, honestly, please don’t. Ask anything you want. I’m very, very happy to talk to you guys. NYLON was the magazine that I first subscribed to. It was the only magazine I subscribed to, actually.

Yeah! It was weird. I loved the music sections and I’ve never really been into makeup— like I’m a self-confessed tomboy—but I remember looking at the makeup pages in NYLON and they were accompanied by these really beautiful illustrations and I was like, 'Oh, that’s cool. Like I can get into that from that point of view.'

This is your first major role in a feature film. How are you feeling about doing all this publicity for it? Were you prepared for this?

Being perfectly honest, I think I was in denial for a very long time about it, and that just takes up too much energy, and the truth is, it’s very easy for someone to be like, 'What? What is going on? This is so insane. It’s so overwhelming. How is this happening to me?' And then, there’s a moment where you just have to be like, 'Take a deep breath and just wake up every day and do it and, you know, this is your life.' The issue isn’t talking about the movie; the issue is with moving your tongue that many times, like your tongue just gets tired. But I could talk about this movie forever. I love this and I love my job and so I just feel incredibly humbled by it all.

Is it strange to see yourself referred to as a rising star?

This is the thing: you know that saying that’s like, 'It’s not going to be what you think it is?' That does not apply to this. It is exactly what I thought it was going to be, but I’m not the way that I thought I was going to be about it. It’s odd. Instead of being like, 'Oh my god, there’s my name! That’s exciting,' I’m like, 'Why is my…that’s my…what? Okay, sure.' It’s bizarre. It’s like a puppy looking at itself in the mirror. I can’t really connect myself to it, if that makes sense.

How is everyone around you taking it?

Amazing. I’m very, very lucky that the people that made this film—man, I’m not even joking—we’re legit family. We love each other so much. I’ve basically been traveling for a very, very long time and my friends have just been incredible. I think that in the beginning, they were like, 'Oh, you can’t be that busy.' And then I sent them a schedule and they were like, 'We love you so much and you can call us whenever you want' and like, 'God bless you. Go forth into the world and try not to die.'

How do you feel about not being home in a while?

It’s not that not being home suits me, it’s that traveling suits me. I’m very nomadic and rather restless and I kind of like the fact that I’m not in a place for that long unless I’m shooting a movie. I have this really weird tick-kind-of-thing where it’s great for my job but it’s something that I’m not that fond of in real life. I learned to speak English when I was eight, and so I mimic people in English all the time, which is why I sound so American right now, because I’m talking to a whole bunch of New Yorkers all day. The one thing I will say I miss from home is my natural English accent because that’s what I grew up speaking. That’s what I sound like to myself, and so it feels strange to constantly be these kind of different incarnations, if that makes sense.

Is it hard to sustain relationships when you’re moving around so much?

I’m married to my work and I’m very happy that way. The thing about acting or movies or any sort of creative expression for me is that it’s not a choice. I have to do it and it makes me the happiest in the world. Any time that I ever start to get into a sort of thing of like, 'Oh damn, I am tired,' or 'I don’t know how to make words anymore,' it lasts for about three seconds and then I kind of look around with really wide eyes and I’m like, “Whoa, I can’t believe I get to do this. I can’t believe that I get to travel the world doing what I love.' Especially in the case of The Witch. Getting to talk about a movie that we worked so hard on and literally willed into existence, and to have people recognize it in this way, is just flabbergasting.

Are you prepared for the attention you’re going to get from total strangers?

Well, I’m actually very lucky, because I look very different from the way I looked in The Witch. I dyed my hair dark and I’m the sort of person that can very easily manipulate what I look like, according to makeup artists. But I really love talking to all kinds of people and I really enjoy making people feel important and valued and special, and that’s not something that’s put on. It’s something that genuinely gives me happiness, to know that someone is being listened to and given the attention that they deserve, because every human being deserves that amount of attention. If someone’s disingenuous or has ulterior motives and you confront them with full-on humanity—I kind of see it as like if a bunny rabbit runs up to a hunter and puts its head on the gun, more than likely, he’s less likely to pull the trigger, if that makes sense.

You believe goodness wins out in the end.

I do, which is kind of hilarious considering the movie that I’m in. I like to believe in the best in humanity because I think that everyone has that in them; they have the power to be good and it’s all a choice. No matter how many times the world breaks me, I don’t want to lose that kind of optimism. It’s a very definite and deliberate choice.

Has the world broken you?

It’s definitely tried. I have a weird habit of resurrecting myself from the dead, time and time again—but in a good way—and I think that’s kind of what makes acting so wonderful. You get to tell other people’s stories and bring your own emotional background. But I think everyone’s been broken by the world. I think it can be little moments, like you know, a friend betraying you or anything like that. But it’s about the choice to remain—or for me, at least—it’s about the choice to remain vulnerable and open rather than become jaded.

With the success of this movie, has it gotten a lot easier to land roles and find work?

If someone thinks that you’re good or that you have something that’s valuable to their set, they’ll actually include you in that team. It’s taken me a while to get used to why they would want to hear my opinion. But if they want to hear it, I’m very happy to give it because I really love movies and I’m very passionate about filmmaking and I’d love to direct one day. The more that I can be involved in anything, the happier I am.