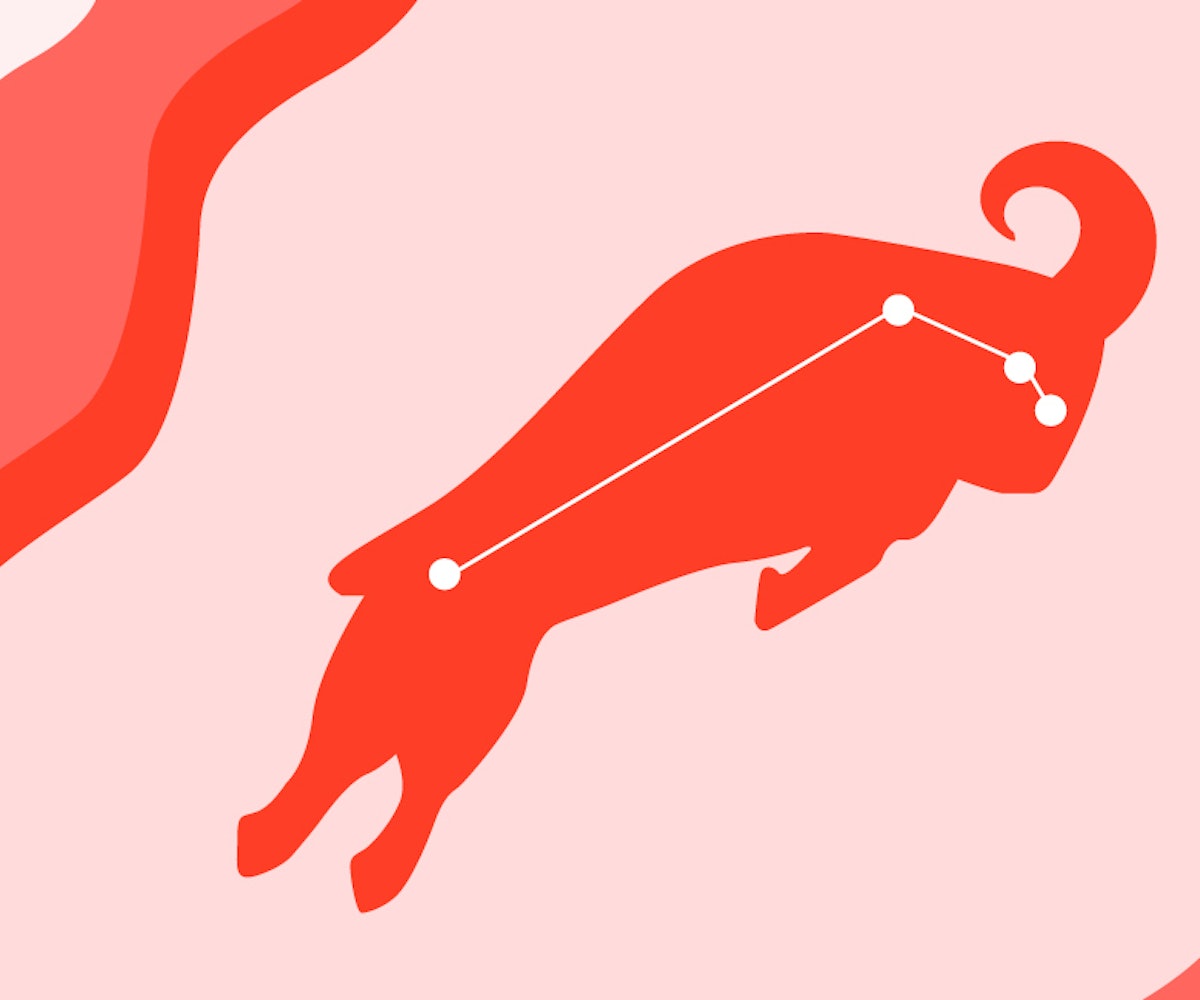 Recently, my younger brother texted me: "I was just thinking, I always got everything I wanted for Xmas ¯\_(ツ)_/¯"

I replied: "Well, yeah, because if you didn't, you'd have gotten really upset."

My brother, not that it needs to be said, is an Aries. Even if it weren't obvious enough from that exchange, in which he typified the way an Aries thinks (namely: Wow, isn't it so funny I just always get what I want? Guess my approach of threatening to dismantle the world over any little thing is really effective!), the fact is that it's clear that he's an Aries because he's my brother, and all brothers—especially younger brothers, but also older brothers, and, also, I'd imagine, twin brothers—are an Aries, because an Aries is the bro-iest of signs.

Does this sound like an insult? It's not an insult. Not exactly, but also not at all. Because while the bro (often deservedly) gets a bad rap for being, well, an overconfident idiot so secure in his own male privilege that he treats the world around him like it's his own urine-soaked frat house (the urine-soaking is a way of marking his territory, obviously), in its most benign form, the bro is like a big golden retriever of a person: friendly, playful, up for literally any game you throw at them, full of confidence because they know they are loved.

If an Aries were an animal, it would, indeed, be a dog. They'd like to think they'd be a wolf, and the zodiac has assigned them the role of a ram, and while both of those make a certain degree of sense because an Aries is indeed stubborn and also paradoxically known for being both a loner and at home amongst a pack (as long as they are leading it), still, an Aries would be a dog. And, as most of us can agree, dogs are wonderful. Dogs are just the best. Dogs are our best friends! They are good boys! It's just that also... pretty much all dogs are assholes.

I know, I know, you're thinking, She's gone too far! Most dogs are not assholes! My dog is DEFINITELY not an asshole. And while it's true that I do often go too far, I am 100 percent right about this. And, before you ask, I've had a dog and I've loved my dog more than just about anything and she was wonderful and devoted and the way she would rest one paw on my arm when I was driving as if to reassure me that she was there for me in this crazy thing we were doing, hurtling down a road at 70 miles per hour in a tin can, I mean... I want to cry just thinking about that sweet, good girl. But also? She could be a total asshole. Oh, not to me—to me, she was an angel—but to other people. She would give them attitude and bark at them if they got too close to me. And, frankly, even to me she could be an asshole. Like, if I went to get paper towels from the bodega without bringing her, she would climb up to the street-facing window and howl for me the entire time I was gone, which was a grand total of five (5) minutes. That's kind of an asshole move! Sure, it's rooted in love, but still.

Now, does this mean I loved my dog any less? Of course not! I probably loved her more. (And, before you ask, no, my dog was not an Aries, she was a Scorpio, because, of course, she was, that moody little bitch. Ugh. I loved her. But still, she was a dog, so she was also totally an Aries.) It's still easy to love an Aries even when they annoy the shit out of you and make you walk outside with them in the freezing cold for half an hour because they just can't find the exact right spot on the sidewalk to pop a squat. You still love an Aries, even when they're asshole bros, because nobody will ever, ever love you the way an Aries does: fiercely, wholly, and with a vengeance. (Because, holy shit, does an Aries ever love to get revenge. But more on that later.)

And just as they love you fiercely, they truly crave the most intense sort of love in return. They want you to worship them. They wouldn't turn down the kind of ritualized love that involves making sacrifices at an altar. (Especially if it involved setting things on fire, because an Aries is the pyromaniac of the zodiac.) It's an interesting kind of love they want, though, because it is centered around an Aries' desire to be recognized as, well, a good boy. They want to be patted on the head. They want to get a treat. They want to know they're your best friend. And they want all these things over and over and over again. This kind of love can be exhausting. Is it often rewarding? Sometimes the most rewarding kind of love of all? Yes! But is it... worth it? Debatable.

Um, which, so, I'm not talking about dogs anymore. Loving a dog is always worth it, because they're dogs! They're great. But loving the human version of a dog? It can be very tiring. Because they don't have the excuse of not being able to use language to communicate, and yet... they often don't use language to communicate. When hurt, an Aries is totally prone to going silent on you, often retreating to a corner so they can lick their wounds. But they're not merely tending to their own injuries over in the corner; they're also plotting revenge.

Because while an Aries does have that whole benign bro/oversized human puppy thing happening on the surface, well, an Aries is not actually peaceful in any meaningful way, because an Aries is inherently belligerent. This also sounds like a bad thing, but it's not, not exactly or not always. There is a time and a place for confrontation, and—unsurprisingly—an Aries will always find themselves right at the exact place and time. Why? Because an Aries lives for drama. An Aries is undoubtedly the drama queen of the zodiac. They are your friend who is always complaining about the drama in their life, and you can't help but roll your eyes because you know they would have it no other way. They'll create it if they have to, but they need it to live.

It might seem like these two sides of Aries, the bro and the drama queen, are diametrically opposed. But actually, they go hand in hand, as they are both indicative of alpha dog behavior, of the kind of assumed personal superiority that all Aries have. Both the bro and the drama queen welcome conflict, in whatever form it takes. Sometimes it's verbal and passive-aggressive (see: Aries queen Mariah Carey, whose "I don't know her" comment about Jennifer Lopez incinerated the internet), but it's always fiery and super-effective. In fact, while it might seem like an Aries would be the type to get into a straight-up fistfight, many of the best known Aries have figured out that the best way of getting back at their enemies is through verbal and psychological warfare. (This is why many Aries and Gemini often get along; together, they are perfectly capable of annihilating anyone in their path, an astrological coupling akin to Doctor Doom.)

This is all to say that an Aries wields an impressive amount of power, and they love to get things done; Type A is really another way of saying Type A(ries). Sometimes their path to success diverges from its course, but that's okay, because an Aries often has more than one major narrative arc to their lives. They are often thought of as comeback kids, in the best possible way. And this makes sense. Here are some famous Aries: Reese Witherspoon, Kristen Stewart, Christopher Walken, Lady Gaga, Elton John, Robert Downey, Jr. Here's a fascinating thing about all those people: You undoubtedly love all of them, but you can also probably separate your love for them and pin it to different parts of their careers. Like, maybe you love Big Little Lies era Witherspoon, or maybe you're more of a Cruel Intentions or Election fan of Reese. Or maybe you loved Stewart in Twilight and that's all you know her from, or perhaps you will never stop being obsessed with her texting style in Personal Shopper. Same goes for Gaga, for Mariah, and for every other Aries ever. Whatever the case may be, you can love these people in whole, but you can also recognize that they are constantly changing, finding new ways to succeed, new ways to make us want to pat them on the head and tell them we love them.

All of which is to say, probably I went too hard on that dog analogy, because the truest thing an Aries actually is when it comes to the animal kingdom is a phoenix. An Aries, after all, is a complicated, fiery thing, who constantly renews themselves, burning themselves up in order to be born again. It's beautiful, really, though the rest of us must be careful not to get burned by all that heat. Then again, scars can be cool. And an Aries will always be there to lick your wounds for you, helping you feel better far faster than you knew was possible, making you forget that they're the ones who caused the damage to begin with. Oh, well, maybe you won't get burned next time? Maybe! But, you know, probably you will. And that's okay. That's just life.