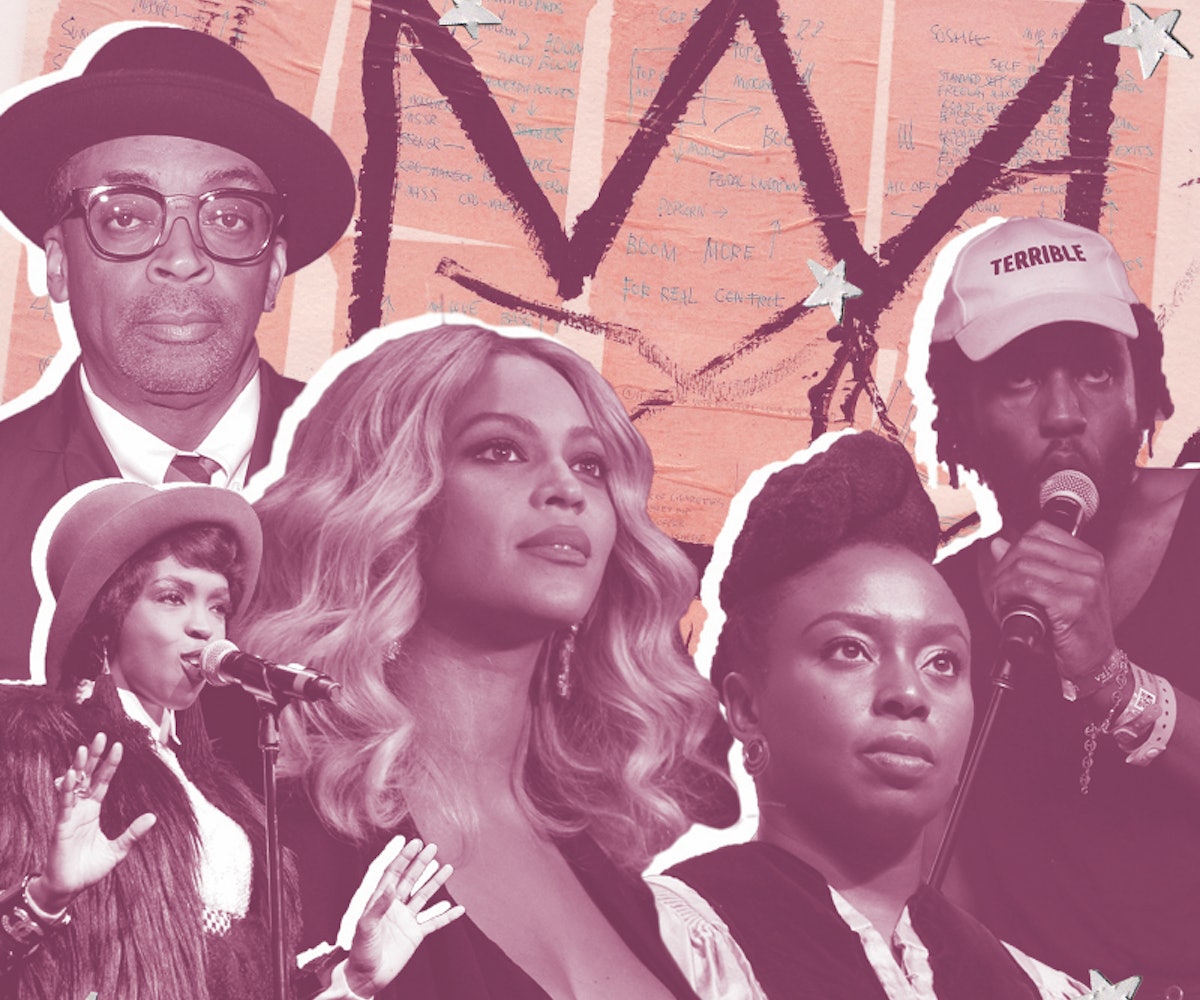 By now, you should know that there is no such thing as a singular black experience. But even though there are many different shades of brown in this universe, we all bleed the same. And though the times have changed, history continues to repeat itself in new forms.

Racism isn't going away anytime soon, but you know what also is long-lasting? Good art. As the Black Lives Matter movement marches on, we thought it was important to highlight pieces of art that accurately capture the experience of what it's like to be black in America.

This list includes all fragments of creativity: exhibits, photographs, paintings, music, literature, films, poetry, etc. There is always room to add more, especially from the classics, but these are some of the more recent works that immediately come to mind for those of us constantly narrating our existence.

Learn more about each masterpiece and the creative geniuses behind them in the gallery, below.

This novel comes from the perspective of a Nigerian immigrant who comes to the U.S. for the sole purpose of obtaining an American education. Throughout the story, the protagonist confronts race and identity head-on in the face of culture shock.

On the off chance that you weren't already familiar with her award-winning work, Chimamanda Ngozi Adichie became even more recognized after Beyoncé featured a sample of her TEDx Talk about feminism in "***Flawless" from her self-titled album.

This album could not have been released at a more relevant time. Though Dev Hynes has expressed that it touches on other things related to LGBTQA issues, it's very much rooted in his experience living in America as a black man from England.

For more information on the story behind the cover art, read this insightful interview with Deana Lawson. The New York-based photographer examines the visual expression of global black culture and how it shapes individual identities.

Formerly on display at the Mnuchin Gallery, this minimalistic installation presents the imbalance of power between white, elitist institutions and African-American communities. David Hammons also provides critical commentary on role models in our society.

Published in 1991 by Crown Publishers, this colorful children's book tells the part autobiographical, part fictional story of an eight-year-old girl looking back on Harlem in 1939 in a dream. Each page contains symbols and historical references that are central to African-American culture. It won the Caldecott Medal Honor Book in 1992.

During the 1960s, Faith Ringgold organized protests and called for action against museums that omitted pieces by people of color—specifically women. Many of her paintings from this period are political and criticize the concept of the "American dream" within the context of race and gender relations.

This album has been hailed as Queen Bey's most personal project yet. Within the album's 17 tracks, she explores the diverse narratives of black women as they find the will to carry on with their ongoing battles.

Do The Right Thing by Spike Lee

This movie is essentially a beginner's guide to police brutality. Released in 1989, the comedic drama revolves around a pizzeria located in the heart of a black neighborhood. Tension begins to build over the lack of melaninated faces that are honored on the Wall of Fame. If you haven't already watched this a dozen times, you're basically a sinner. Much love to Radio Raheem.

This body of work will leave you completely speechless. Despite the circulation of quotes from her poetry on Tumblr over the years, it should be noted that Nayyirah Waheed is very much about the FUBU (for us by us) mentality. Her tweets will provide you with daily inspiration—trust me, you need it.

These paintings and collages became popular pieces in the homes of African-American families during the '90s. Varnette P. Honeywood's work, known for its use of color, patterns, and textures, primarily depicts variations of black family life in a positive light. To learn more about the artist, visit her website.

Pitchfork nailed it with this line in their recently published review: "Why, these women ask, would you hurt a woman who is fighting for the liberation of your people?" Black women consistently show up at the frontlines of all black movements—from the Civil Rights era to the time of Black Lives Matter, they are always present.

These contemporary paintings of African-American men focus on the exploration of the male figure. The sporty fashion clothing is intentionally paired with the ornate backgrounds to bring attention to issues of class, race, and gender. Kehinde Wiley's signature style nods to the European tradition of portraiture. Learn more about his career on his website.

Previously on display at the Studio Museum of Harlem, this exhibit examined acts of violence committed against children of color. Furthermore, the installation presented the idea of how the public continues to view black children as threats instead of victims in these incidents of tragedy. They are robbed of their innocence, and, ultimately, their lives.

Released in 1990, this famous series visually tells the intimate story of one woman’s life from one room—her kitchen. Within the 20 photographs and 14 text panels, Carrie Mae Weems zooms in on the delicate relationship between race and gender in a traditional family setting. During the span of her 30-year career, she has also reflected on cultural identity, sexism, class, politics, and power within her work.

"For Colored Girls (The Missy Elliott Poem)" by Ashlee Haze

Part of this spoken word poem was featured on the opening track of Blood Orange's Freetown Sound album. It went viral in 2015 and eventually came full circle when Missy Elliott paid Ashlee Haze a personal visit in her home.

"Gestures Of My Bio-Myth" by Nakeya Brown

Through her pastel-tinted photography, this D.C.-based contemporary artist focuses on the "interpretation of the politics of black hair, examining how it relates to culture and identity." Back in 2014, images from her series "The Refutation of 'Good' Hair" and "Hair Stories Untold" went viral on Tumblr. Her most recent body of work, "Facade Objects," can be viewed here. Learn more about her in our interview.