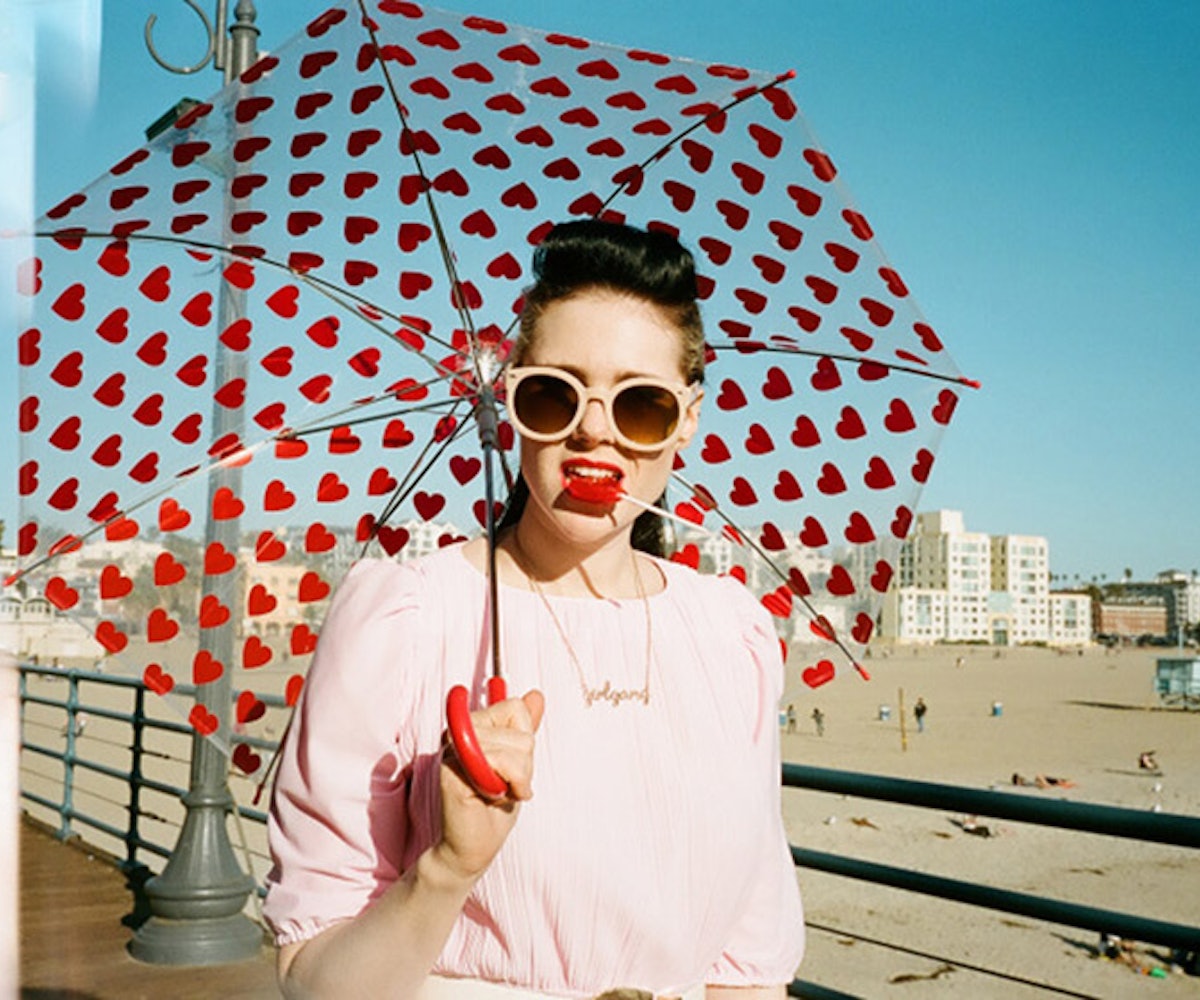 all photos by alice baxley

"I'd want to shoot her album cover on Mars if we ever get that colony started there!"

The thing about the Internet is that it's an endless loop of uncovering cool stuff. You click on one Tumblr, which leads you to an awesome Instagram account, which takes you to a rad website where you discover your new favorite artist. This happens to me (almost) every time I look for news online. Call me distracted or call me fascinated, but I'm always finding cool stuff by letting the Internet guide me its own way. This time, I found a central place I could have ended up at every time I perused the photos of bands and musicians like FIDLAR, Kate Nash, The Orwells, Together Pangea, Dune Rats, Twin Peaks, or Meatbodies. Because all of their photos would have led me to the same place, the same person: Alice Baxley.

Baxley is an LA-based photographer who documents the people in and around her life (who often happen to be cool music-makers) via photos taken with her Kodak Portra. It's Baxley's eye for shooting a certain style of music that ends up telling a certain style of story which, if you ask me, is the story I'd want the world to see through my press shots if I had band. Alas, I don't have one (yet), but I did have the chance to catch up with Baxley about music, Hawaii, and Instagram, so check out my interview below!

How did you first get into taking photos of your life and the people in it?

I don't think it was any different than anyone that buys a camera. You buy it to capture personal moments for yourself. I was kind of obsessive about it and took my camera everywhere and photographed everything and everyone. I never knew it was going to turn into a career, I just liked taking photos. Over time it just turned into less of a hobby and more of a medium of self expression.

How did you get into photographing bands?

Growing up in Hawaii, there wasn't a ton of bands coming through and playing shows there so once I moved to California, I just freaked out and kind of went on a show spree. I just went to any show I could afford to go to and photographed every show I could sneak my camera into. By this time my brother Zac Carper had also started the band FIDLAR. It was such an inspiring thing to watch happen to him and be part of. I knew it was something special and wanted to document as much as I could for myself. Then it just sort of took off.

Who are some of your favorite bands to photograph and why?

FIDLAR and Together Pangea

These two bands are my first loves in this journey. I don't particularly think my photos were that great when I first started, but its like your first love: You'll always remember how you felt and the experiences you went through--a lot of growing pains, but you kind of cherish that and never forget it. It serves as a reminder why I started doing this.

The Orwells and Trash Talk

I love photographing these bands because they put on insane live shows. The front men of these two bands are insane. I just never know what's going to happen and so the unexpected is so exciting to capture.

The Orwells photgraphed by Alice Baxley

The Orwells photgraphed by Alice Baxley

Whois your dream musician to work with?

Björk, hands down. She’s my ultimate girl crush. I'd want to document her writing, recording, touring, and during her creative process. She's so amazing. To me, she's not from this planet! I'd want to shoot her album cover on Mars if we ever get that colony started there!

If you could go on a US tour with one band and document their live sets/backstage parties/pizza-eating, who do you think you'd have the most fun with? The Flaming Lips!

What’s one piece of advice for young photographers who want to shoot bands specifically?      Use the internet. It's crazy how simple and powerful that is. I couldn't afford to go to art school so everything I've learned was from looking stuff up and literally teaching myself through reading online materials and signing up for free online lectures. With the use of social media, contact with bands is at your fingertips. Just go out and photograph stuff.

Which three Instagram accounts are you obsessed with right now?

I vicariously travel-slash-live through Leila's images. She's an amazing photographer also from Hawaii but currently lives in England.

Ed Templeton (professional skateboarder and owner of skate company Toy Machine). He posts his old skate photos and documents things around him. I love that. It's like people watching through his iPhone.

@Punksgitcut Jay Howell is an artist that created and designed the characters on Bob's Burgers. He's a great guy and makes really cool artwork.